This was our second visit to Edinburgh Castle, but the first was decades ago and while the exterior obviously hasn't changed the interior and even the exhibits certainly have. Walking to the castle from our flat on Lothian Road we took Bread Street to Spittal and then onto Johnston Terrace. It's an uphill climb as you can well imagine given the castle built on a rock is the highest point in the city. 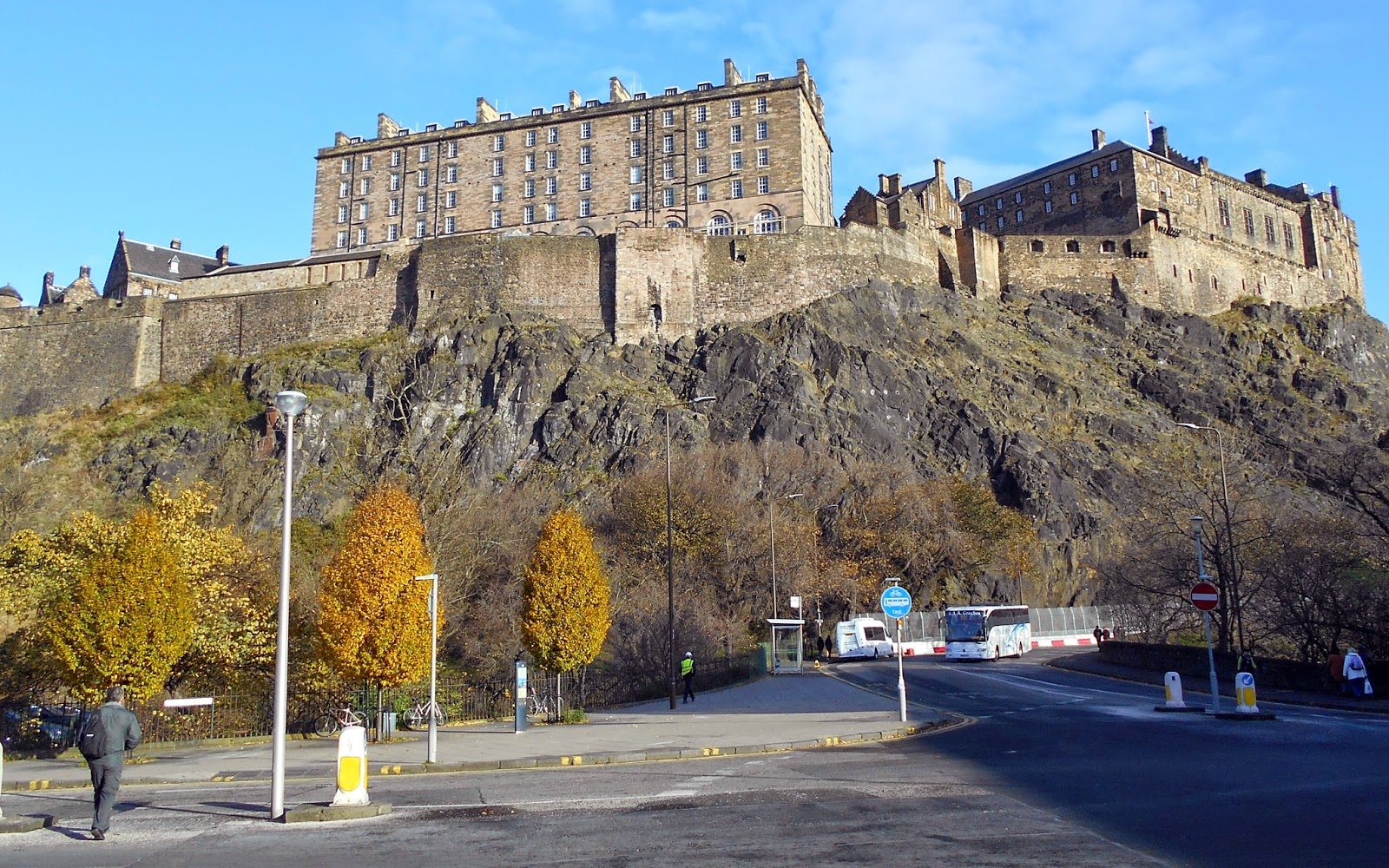 This is the front gate of the castle and directly behind (where John is facing) is a massive parking lot that is home to the Edinburgh Tattoo. 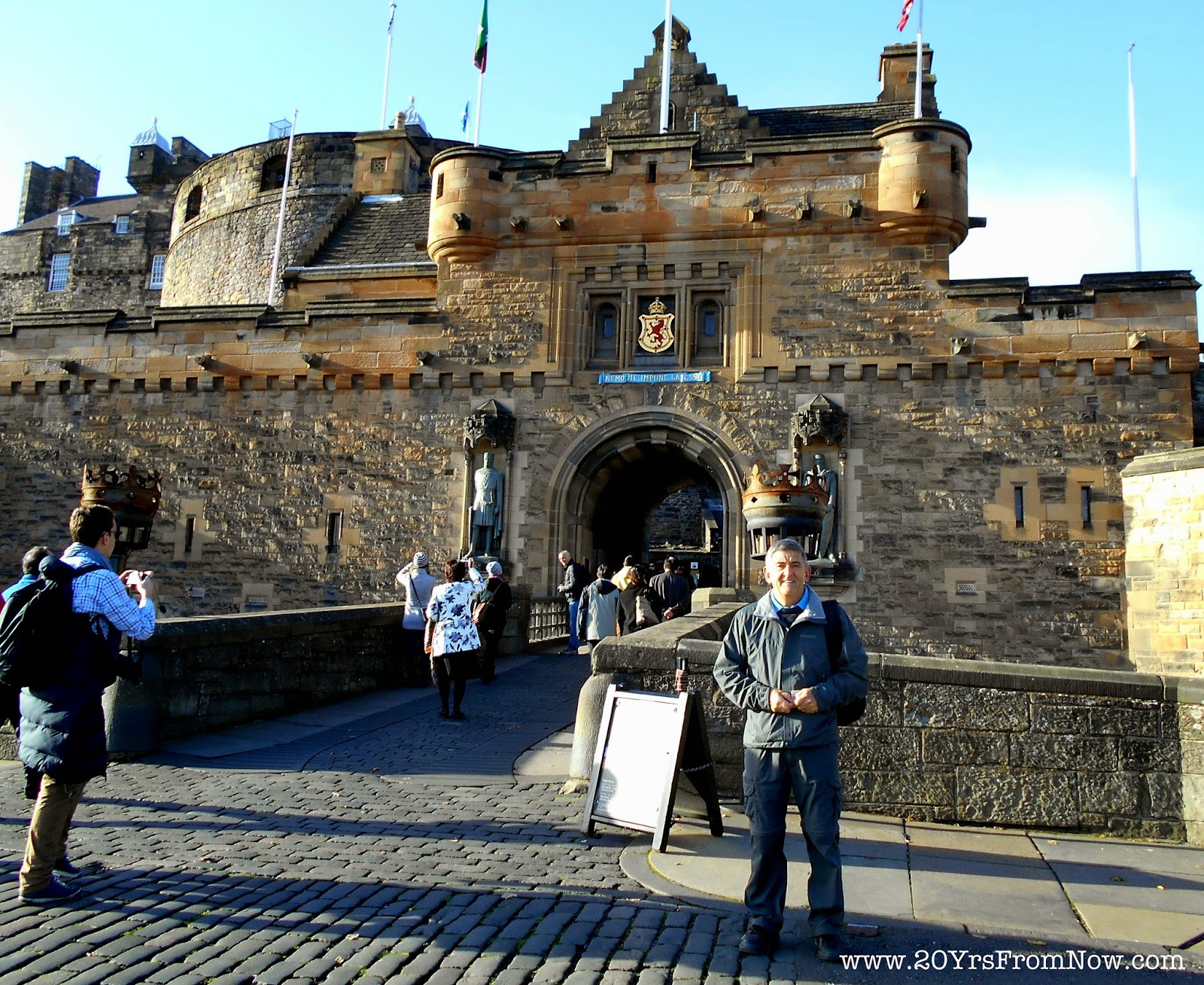 The drawbridge and entryway to his right is like those you've imagined or seen in movies or on TV...gigantic double doors separated by a massive thick wall and edges with spikes dangling from above ready to impale trespassers!

I've quickly discovered there is no need for stair-master machines in Scotland. Everything is UP hill and 50 steps to get any where is nothing. These are the Lang Stairs just inside the entrance gate. See that roof and chimney at the top? That's where we're headed... 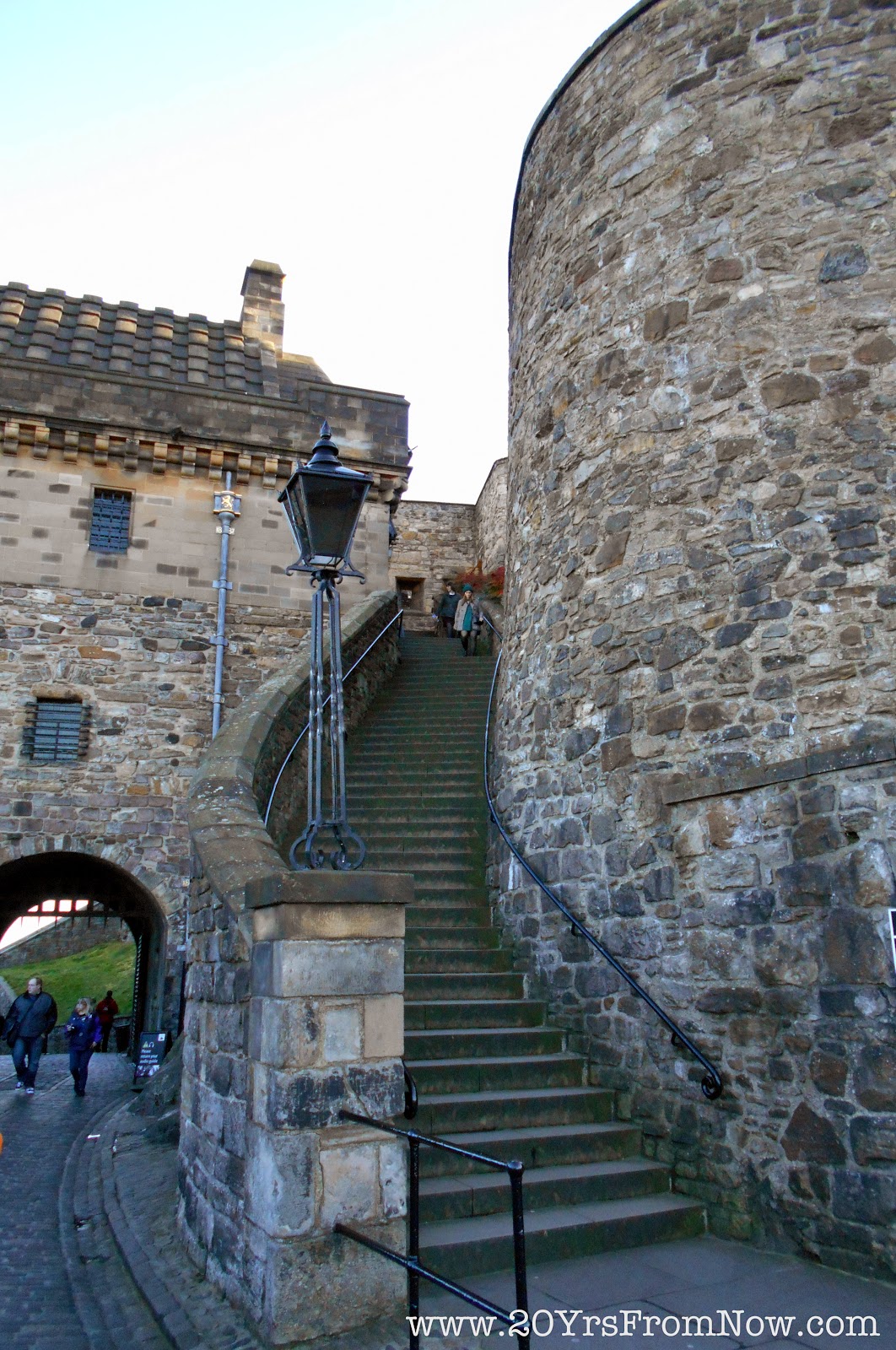 The Argyle Tower is a relatively new addition to the castle having been built in 1887, but still quite impressive. 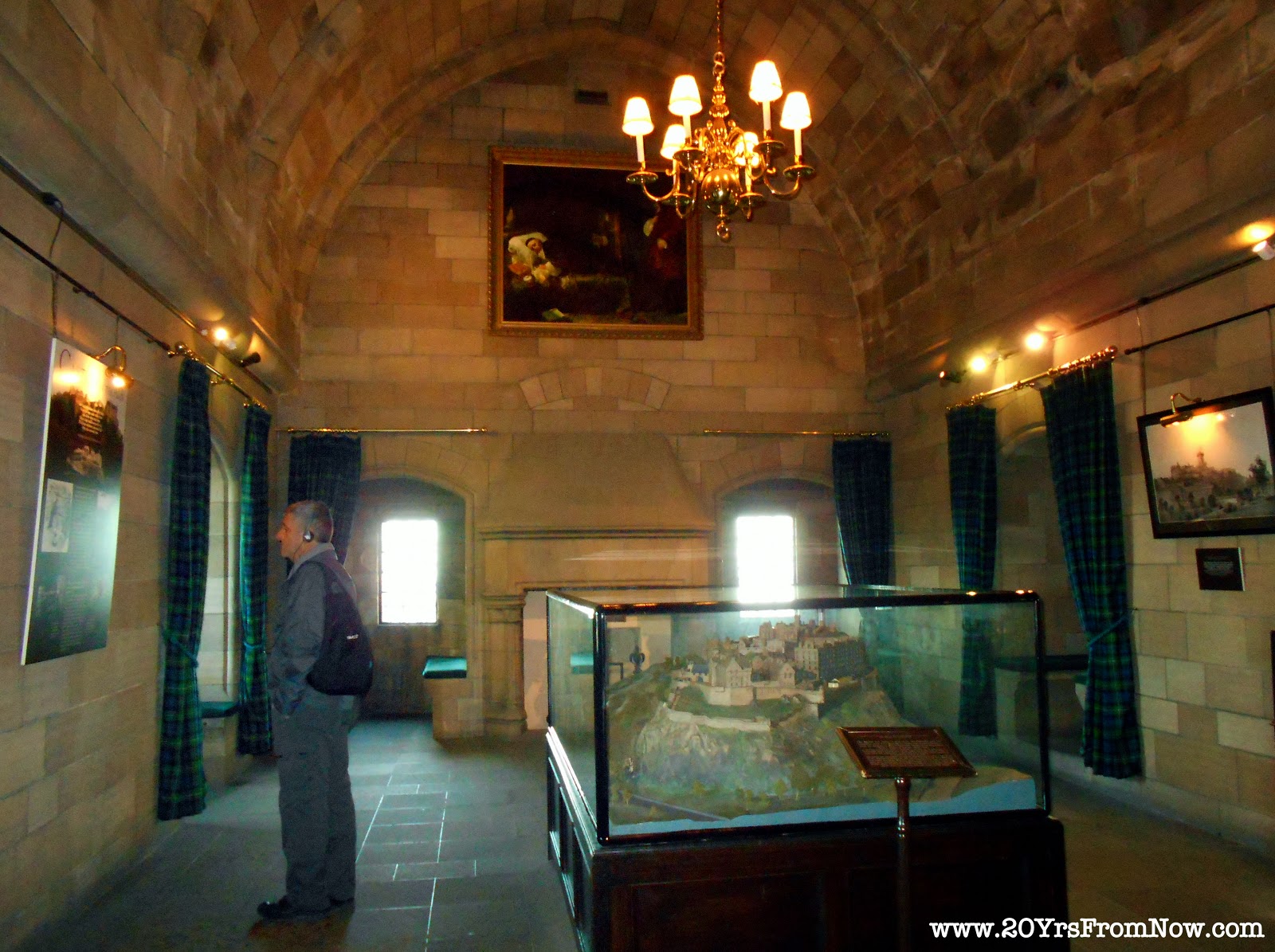 Next we met Mons Meg a cannon that terrorized many a city and nation. Built in 1449 in Belgium it was presented as a gift to King James II of Scotland and used in sieges until 1680 when the barrel burst. Then, in 1754 it was taken to the Tower of London, and only returned to Scotland in 1829. While in action Mon Megs required hundreds of men and horses to move her from place to place and could be seen crossing the countryside at a speedy 3 miles per day during battle. The massive cannon balls could be found up to 2 miles from where they were launched. Pretty scary stuff if you ask me. 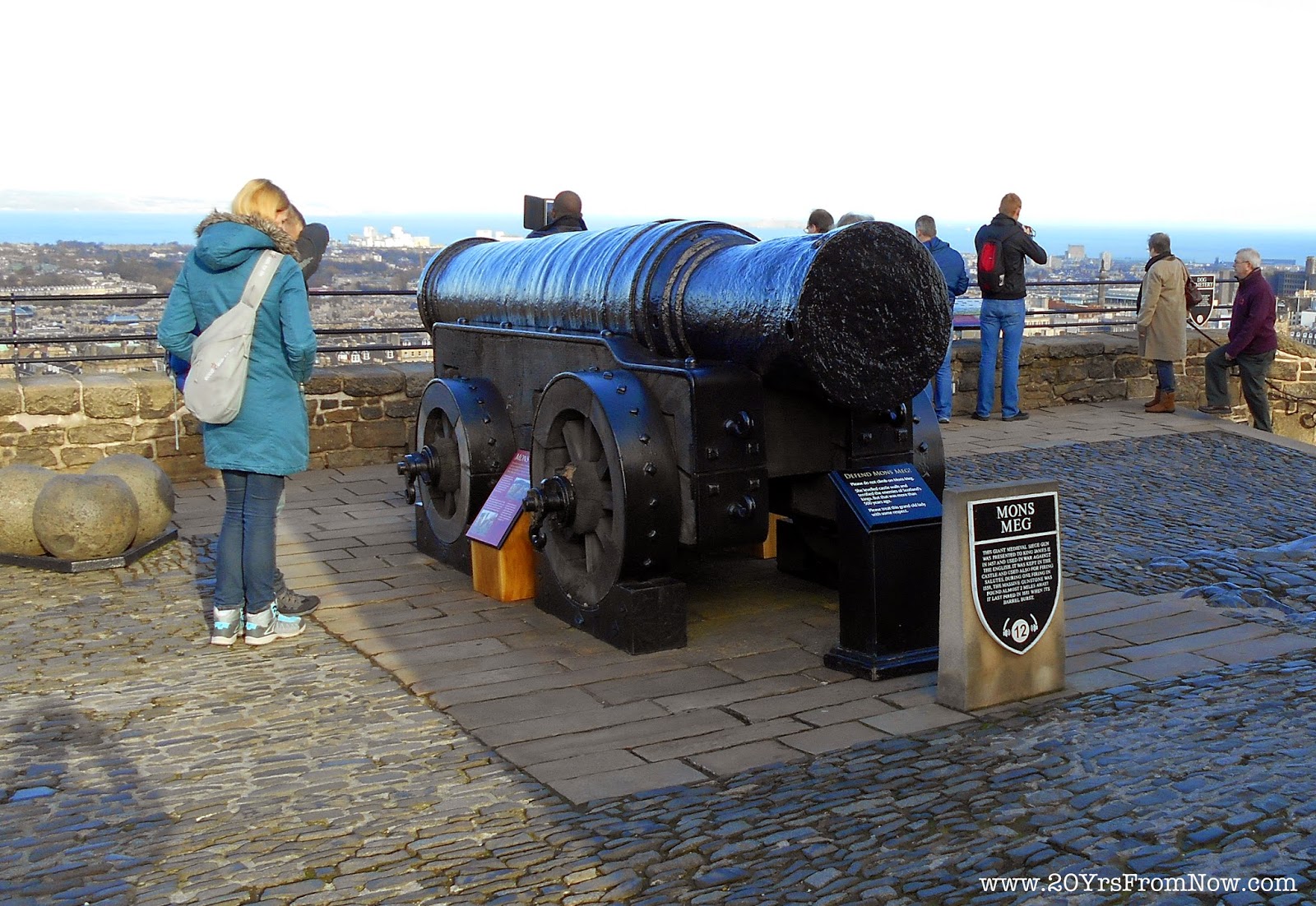 See those folks to the right (above)? They're looking down at the castle's dog cemetery (below). Faithful canines who served next to soldiers were honoured with a castle burial. Their graves stones can be seen along the outer wall. 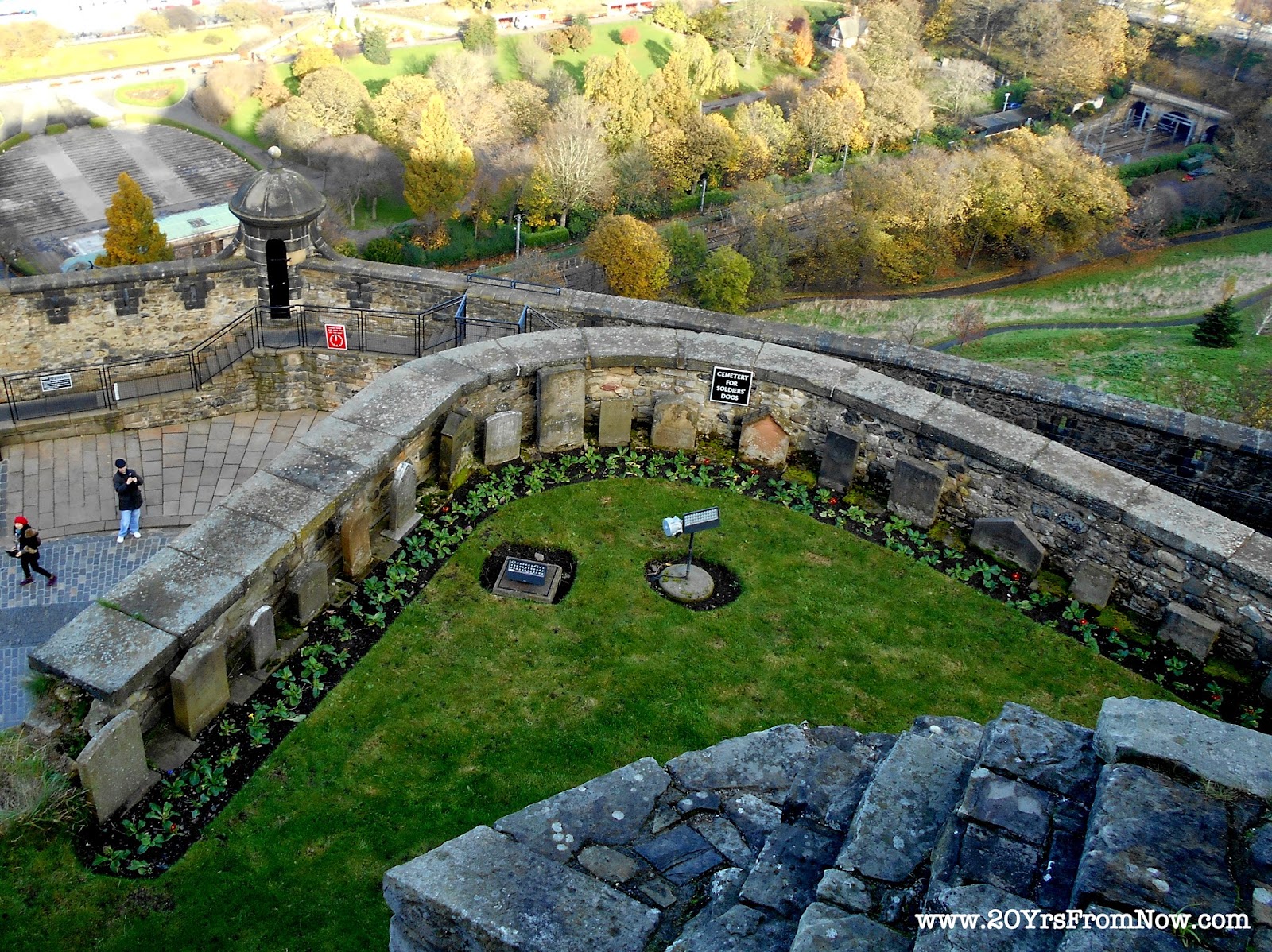 St. Margaret's Chapel dates back to at least the beginning of the 12th century. While the exterior is plain and functional... ...the interior carvings and warmth of the stone make it a serene and inviting place. 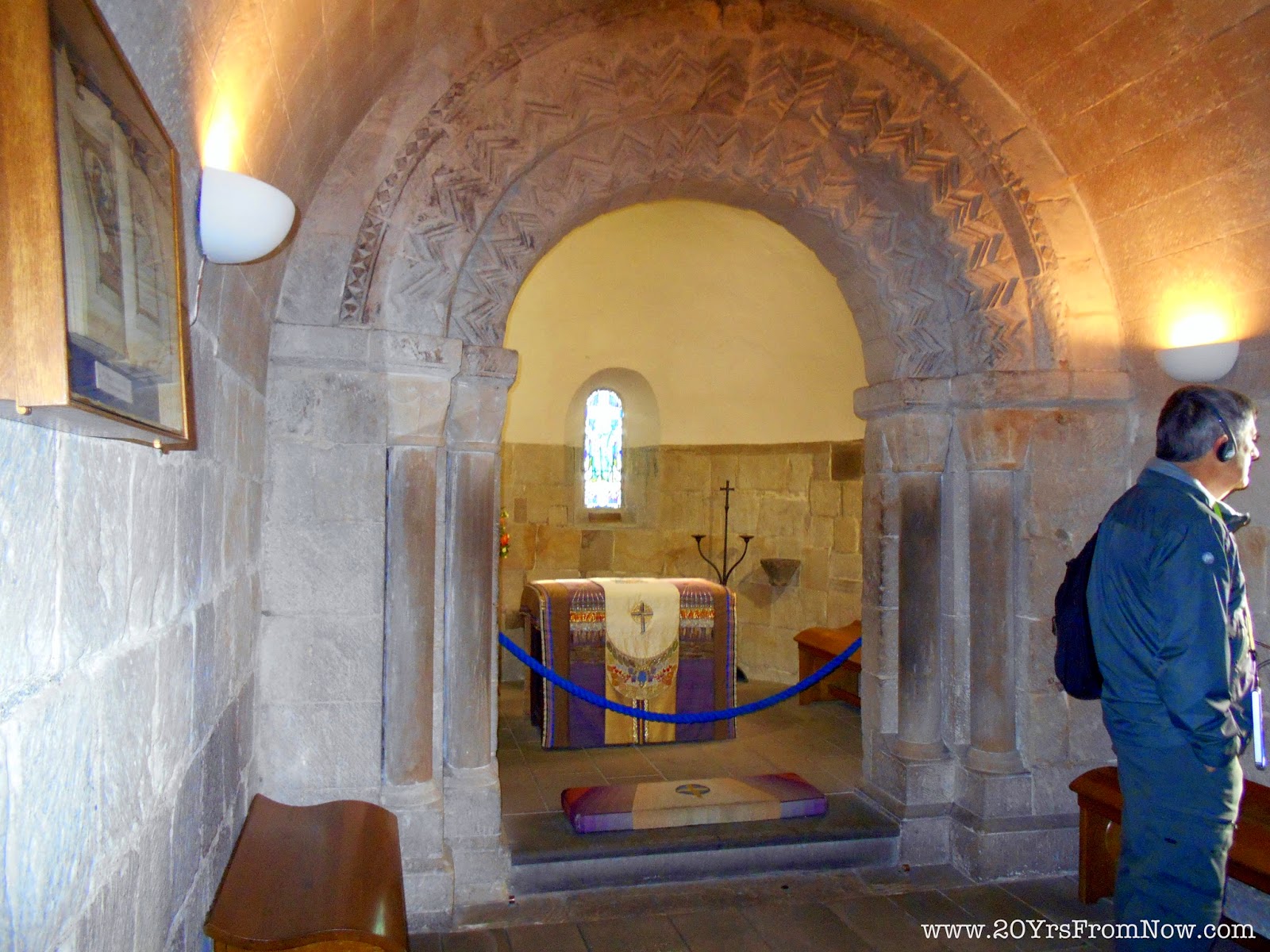 A lovely surprise I discovered all throughout Edinburgh are the abundant green plants and flowers. Such a treat for early November...and clear blue skies as well! 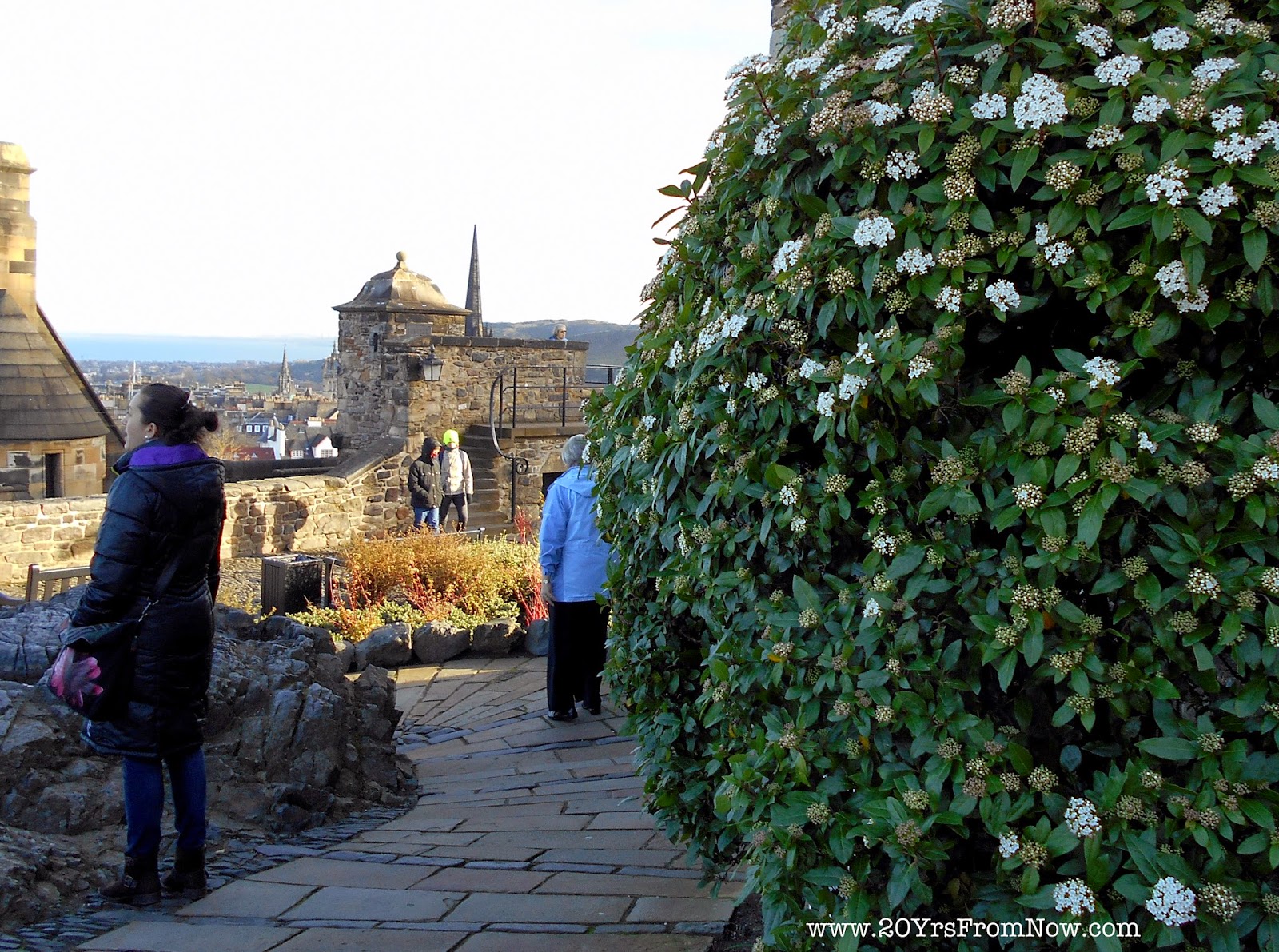 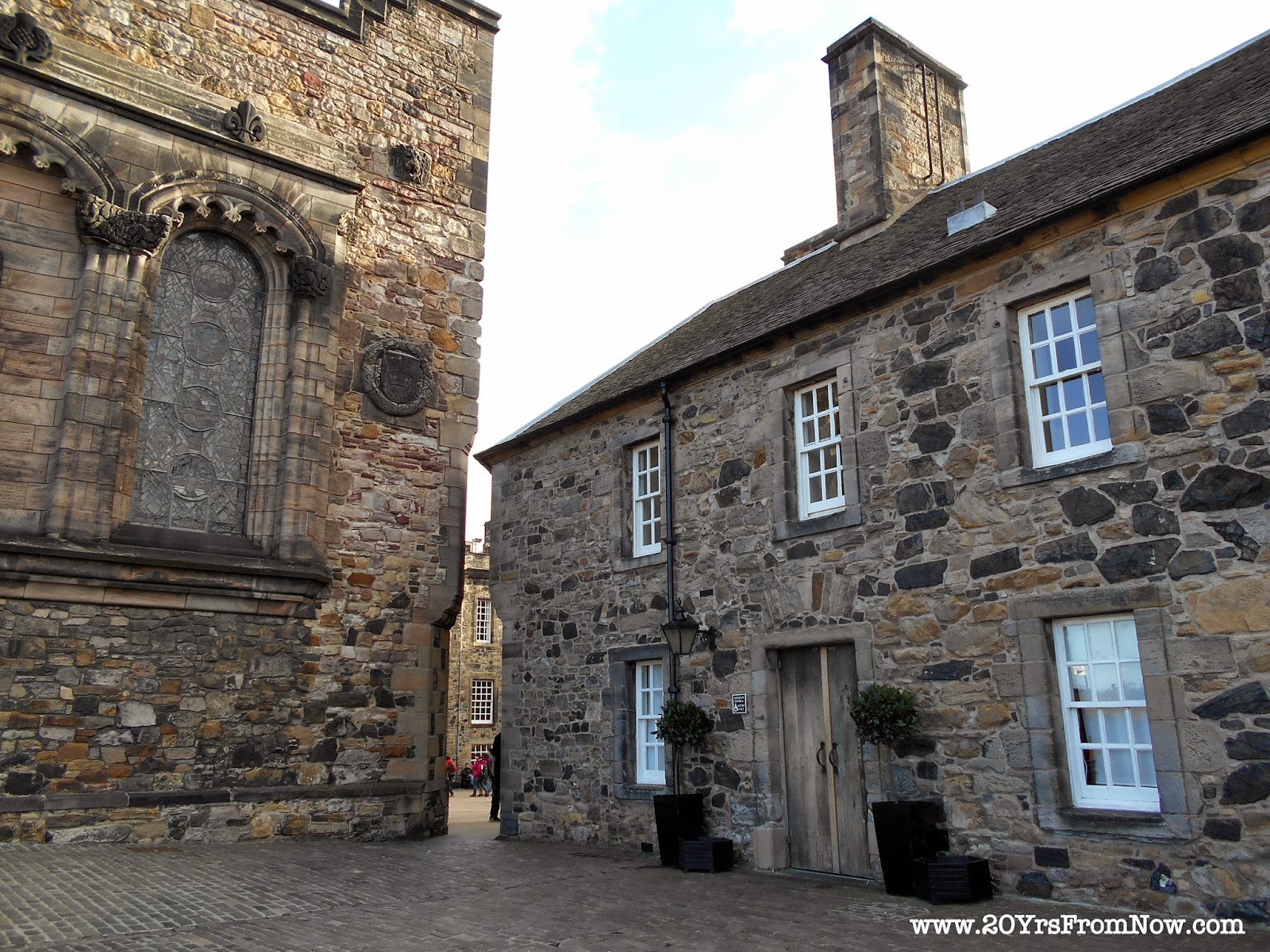 Standing closer provides a lovely photograph of the Royal Palace that houses the Scottish Crown Jewels. 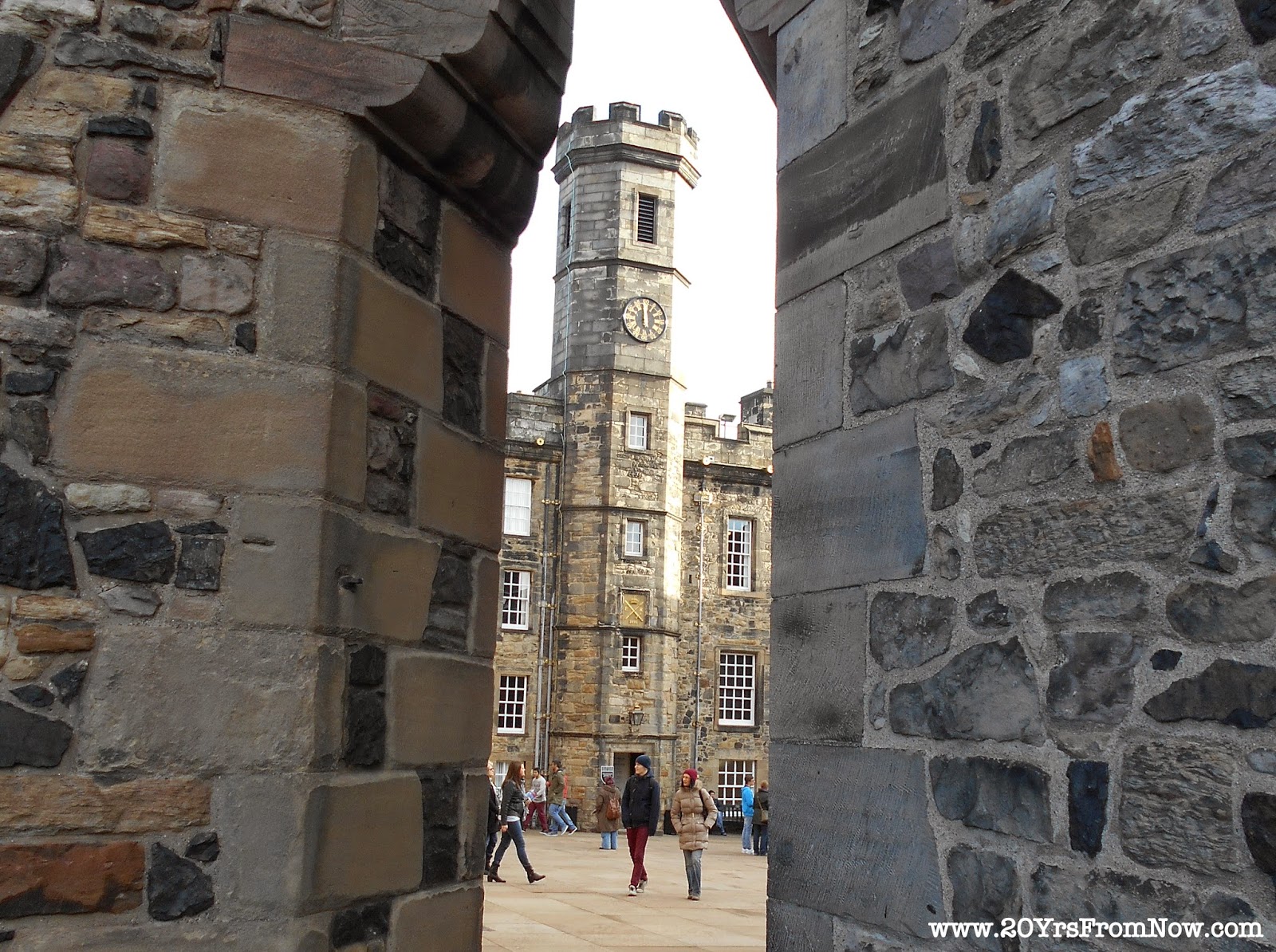 This banquet room was refurbished to appear as it would have when the palace was occupied by the King, and it is now used for city events. The Great Hall is next door, and it truly is great. Only the wooden ceiling is medieval, everything else was refurbished during the Victorian era. 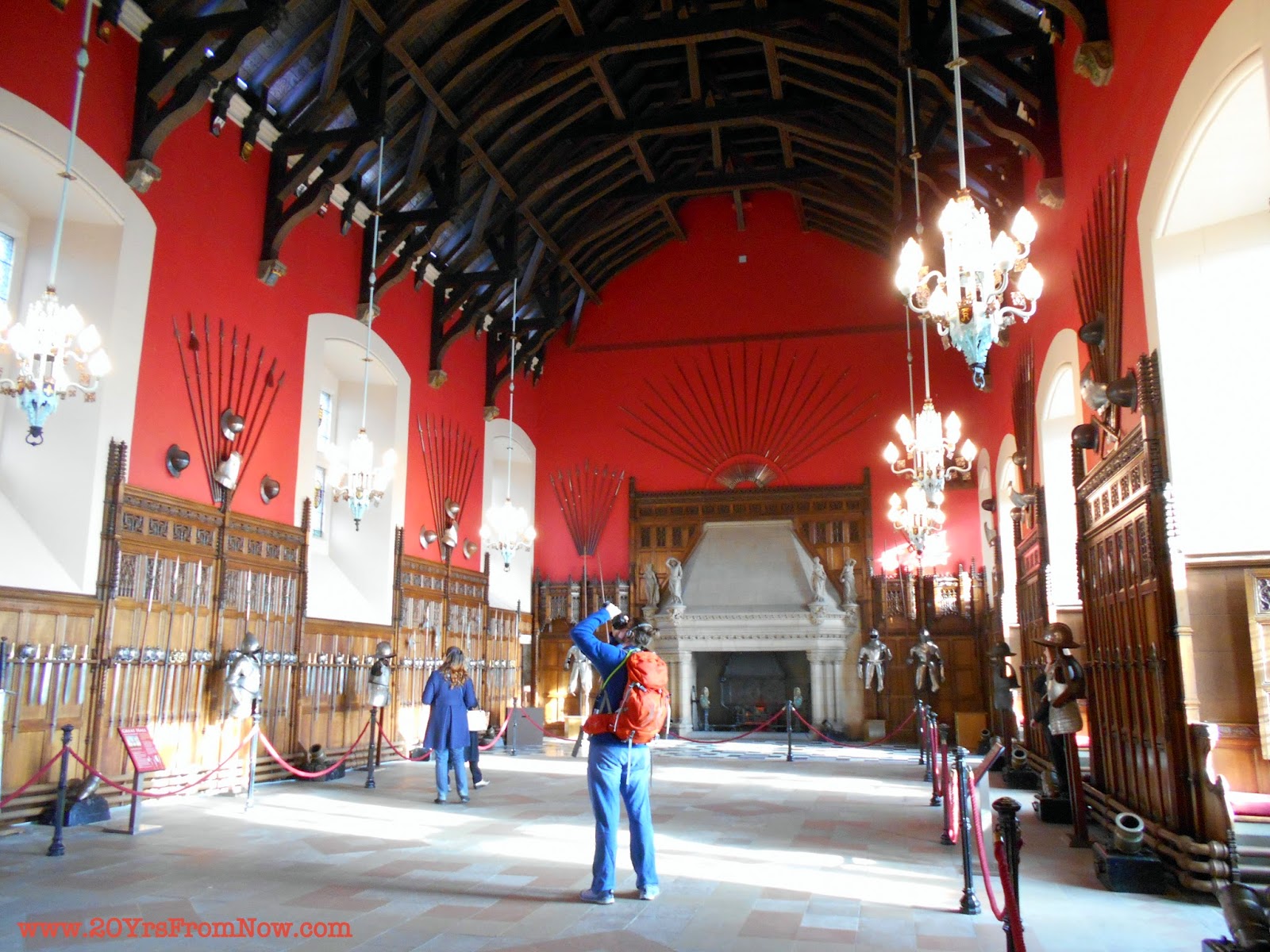 One fascinating feature is the little square barred window to the right of the fireplace (below). It's known as the Laird's Lugs (Lord's ears) because in the early 16th century King James IV would eavesdrop on meetings taking place in the hall below. Ever the perfect accessory for a shrewd politician or his adversary,  Mikhail Gorbachev insisted Laird's Lug be bricked over before he visited the castle in 1984. 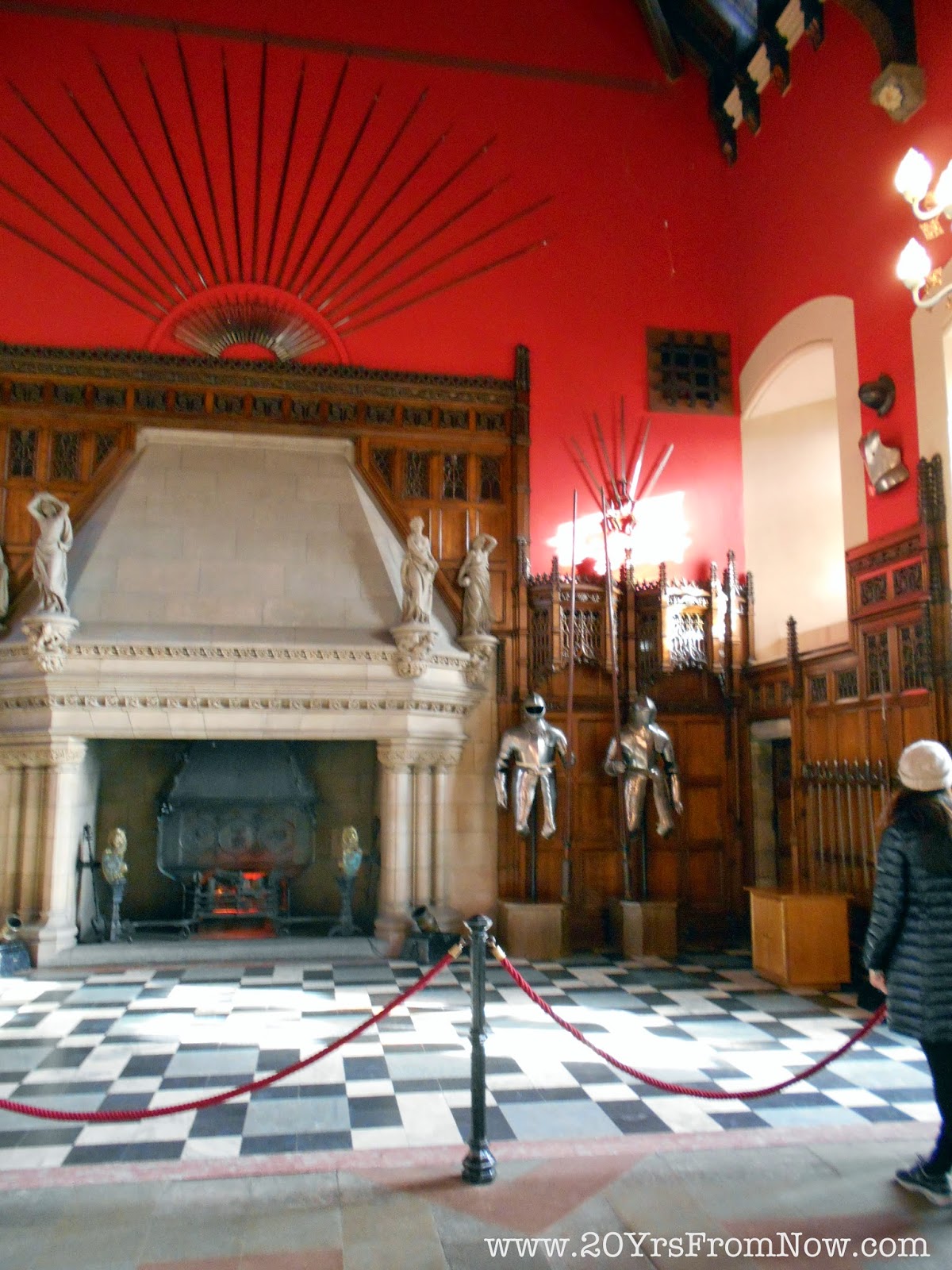 This row of cannons is proof of the many battles fought over the castle. 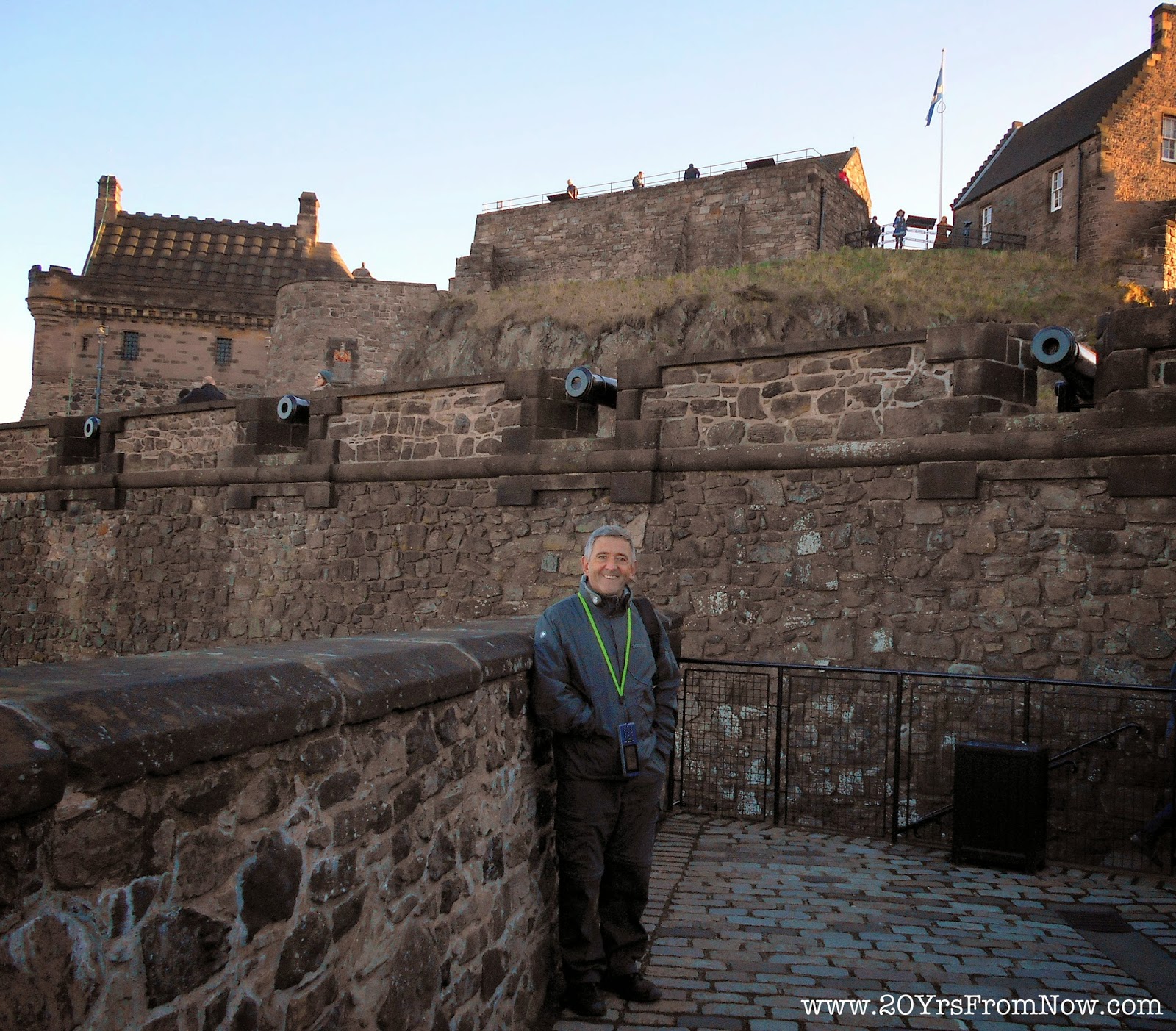 And if the first gate was ever compromised this second gate would surely keep out intruders. 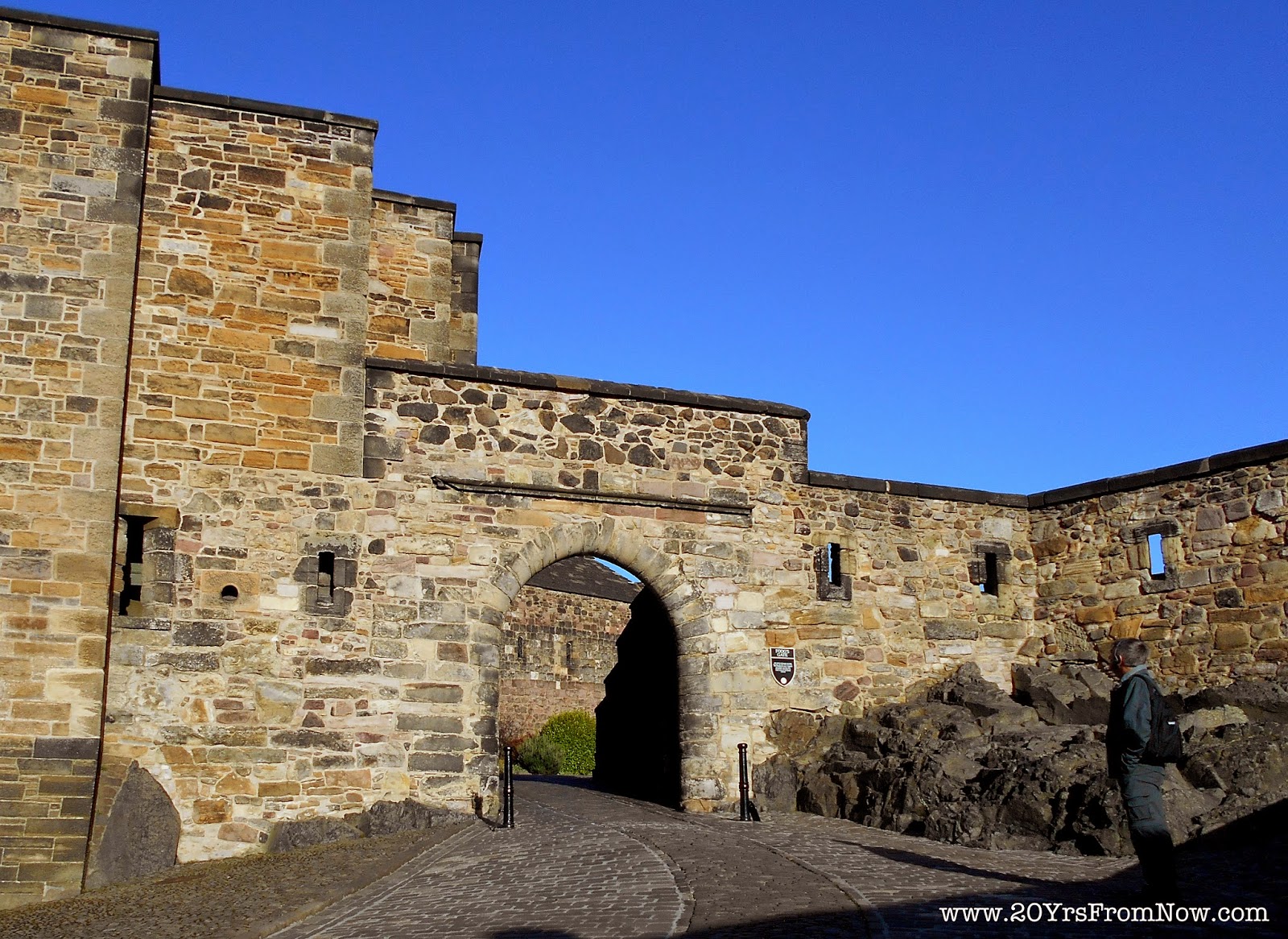 The castle dominates the city skyline 24 hours a day and as John mentioned this morning whether we catch a glimpse of it from a tiny passage way in Old Town or a street corner in New Town "it never gets old". 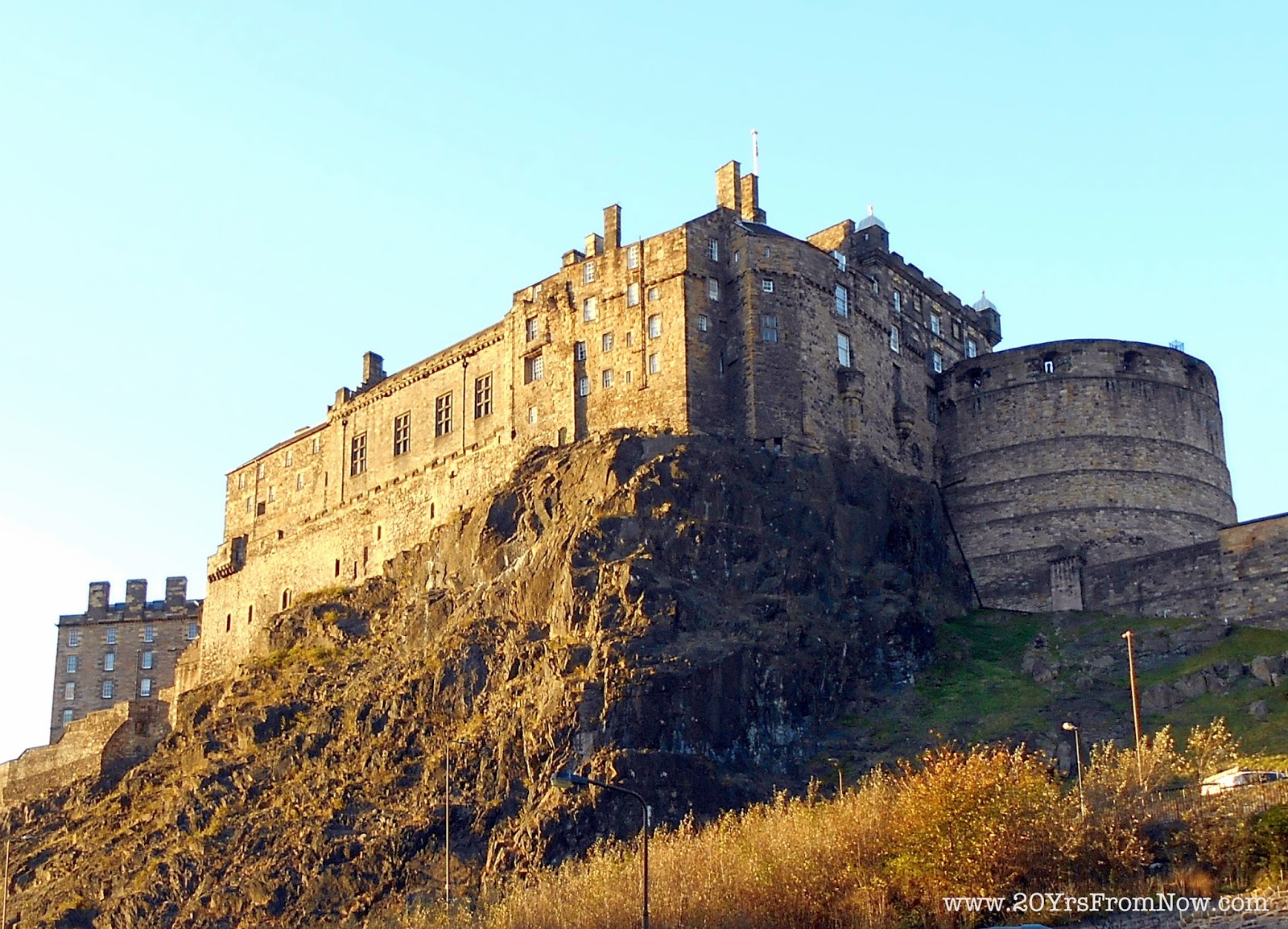