This past week we've explored the area around our apartment as well as the beach and old section of Albufeira. 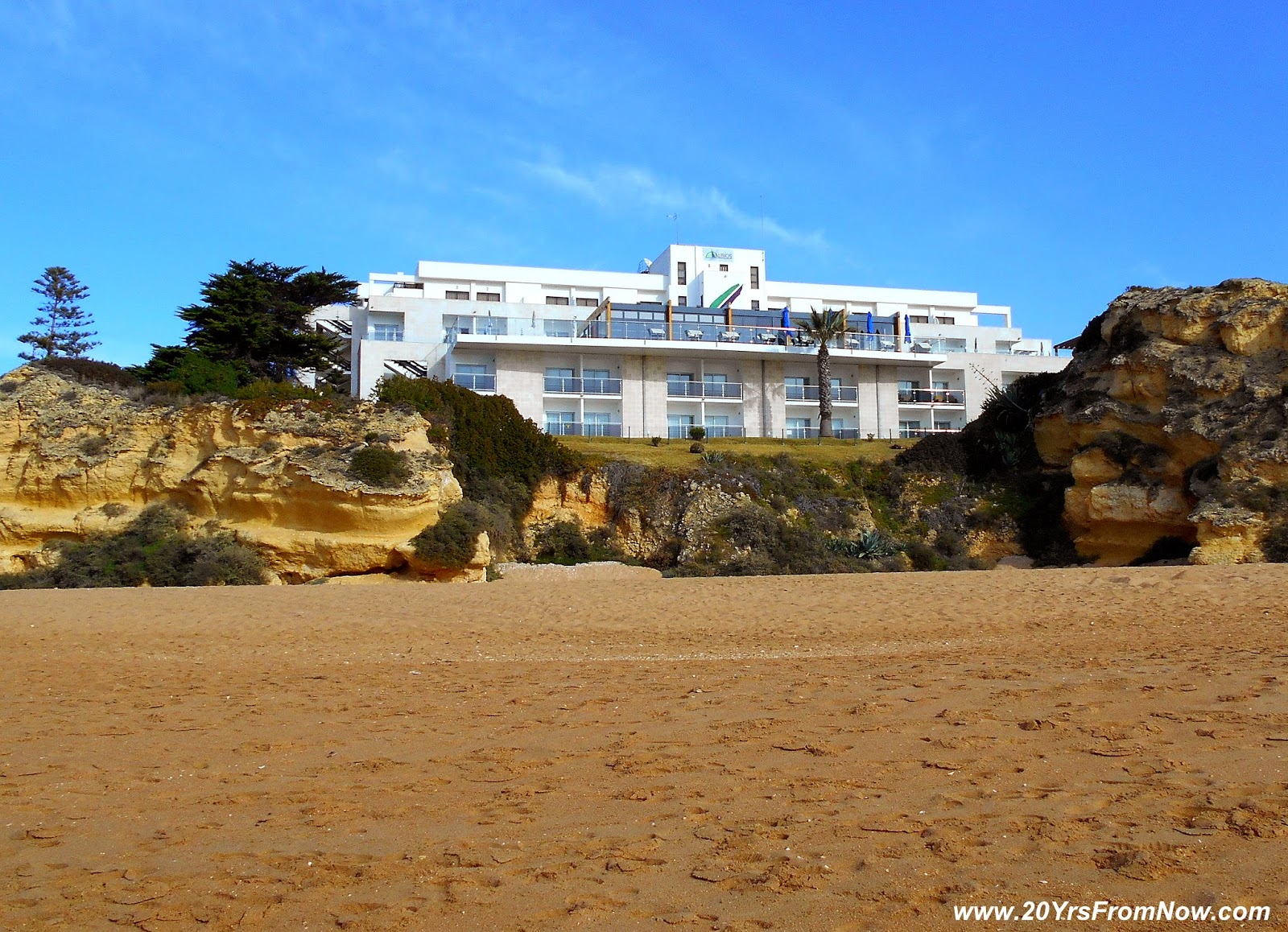 While we walked along the beach past the hotel (above) on the way to town I found my "new winter boots". Last time I'd seen them was two years ago in Florida and I honestly feared I'd lost them for good. Not so! 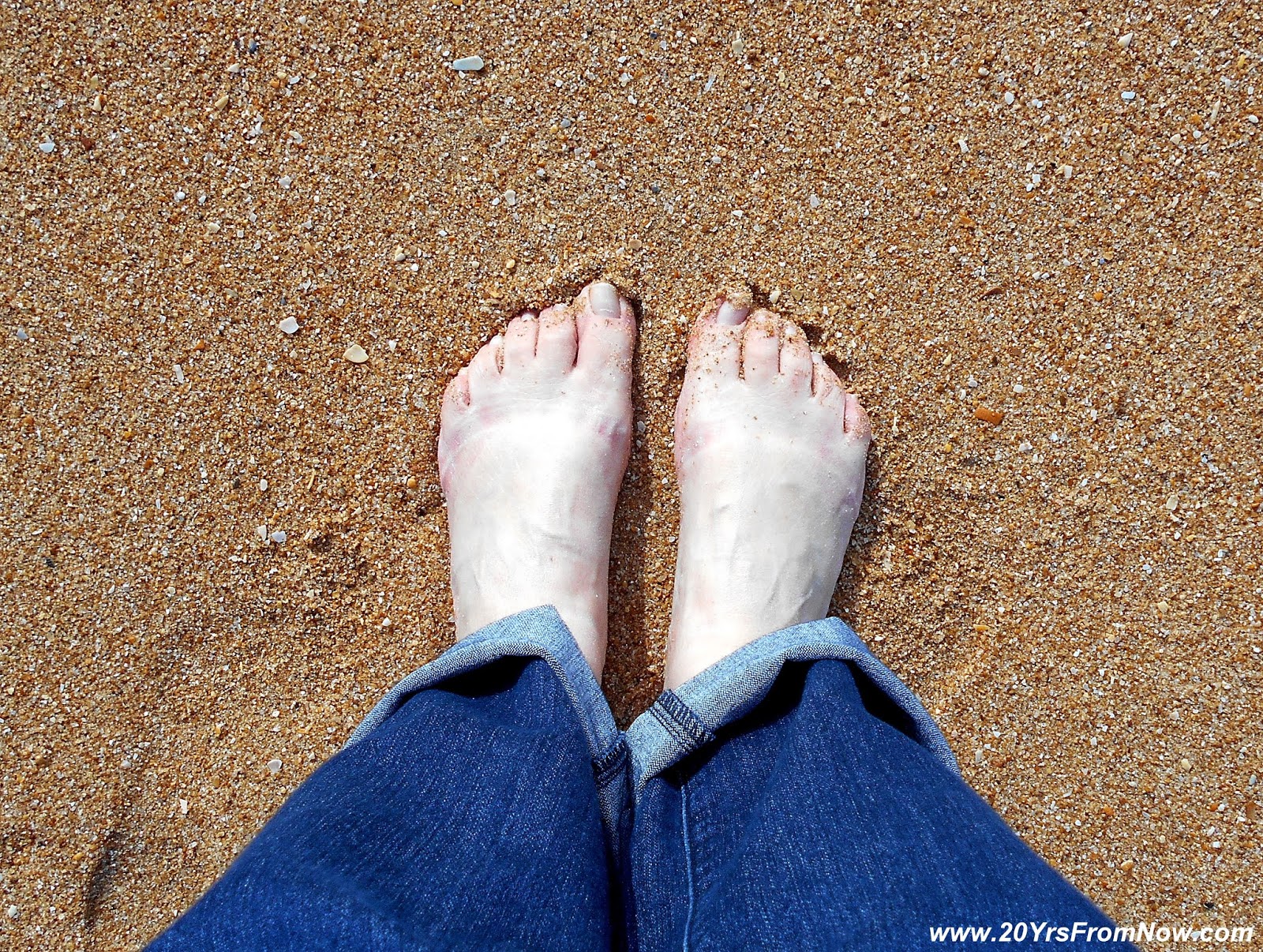 Albufeira was originally a sleepy fishing village in the Algarve region of Portugal, but it is now a popular tourist destination.

The population is around 40,000 including 4,000 foreigners who now call it home. The old town's narrow streets wind up and around the surrounding hills and while a 1755 earthquake destroyed most of the buildings there's always something in the 'newer' architecture that catches the eye - such as this elaborate stone exterior. It's a work of art! 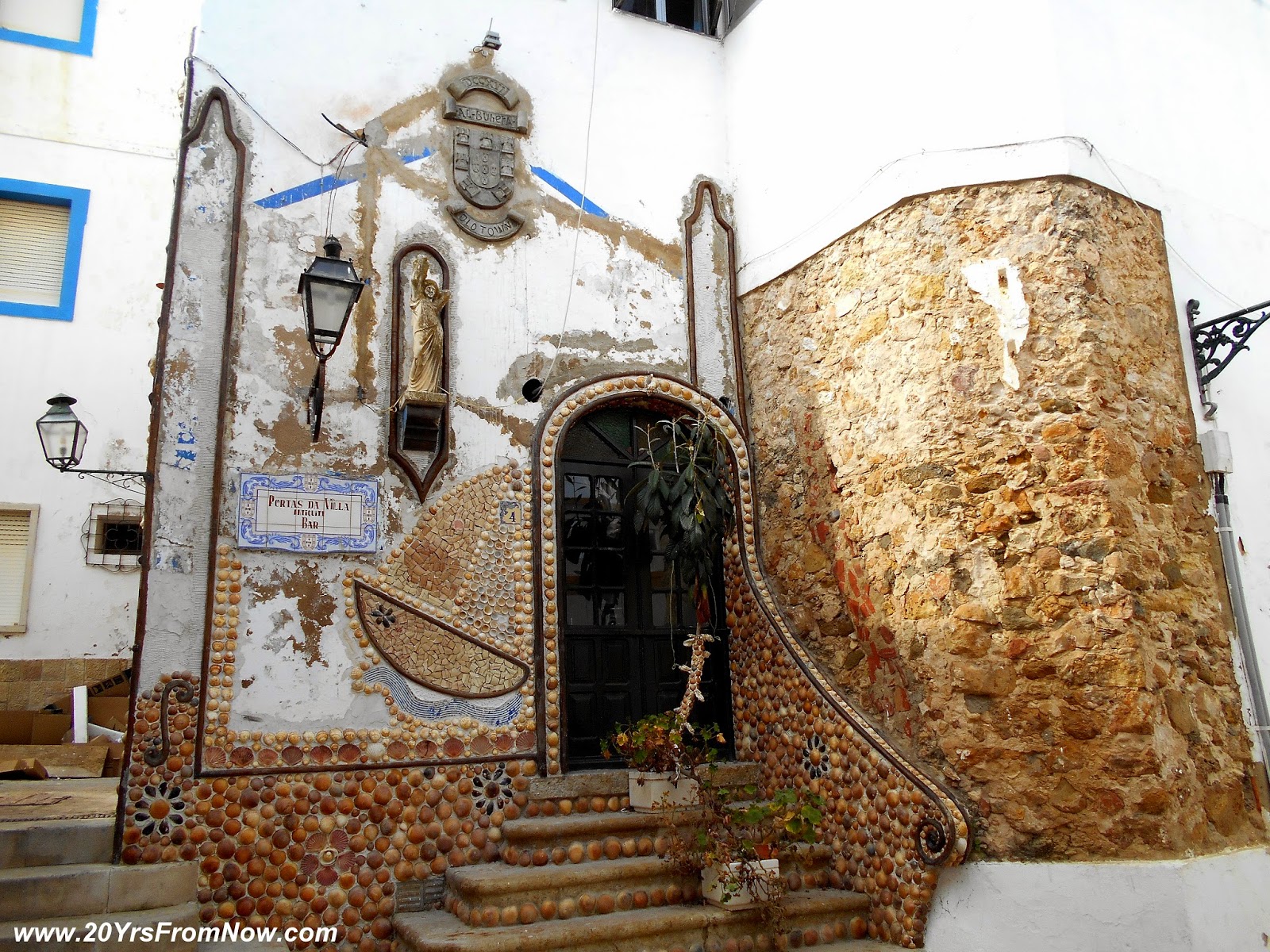 A good portion of the shops are closed as January is the off season, but there are still enough open to appease visitors in need of some 'retail therapy'. 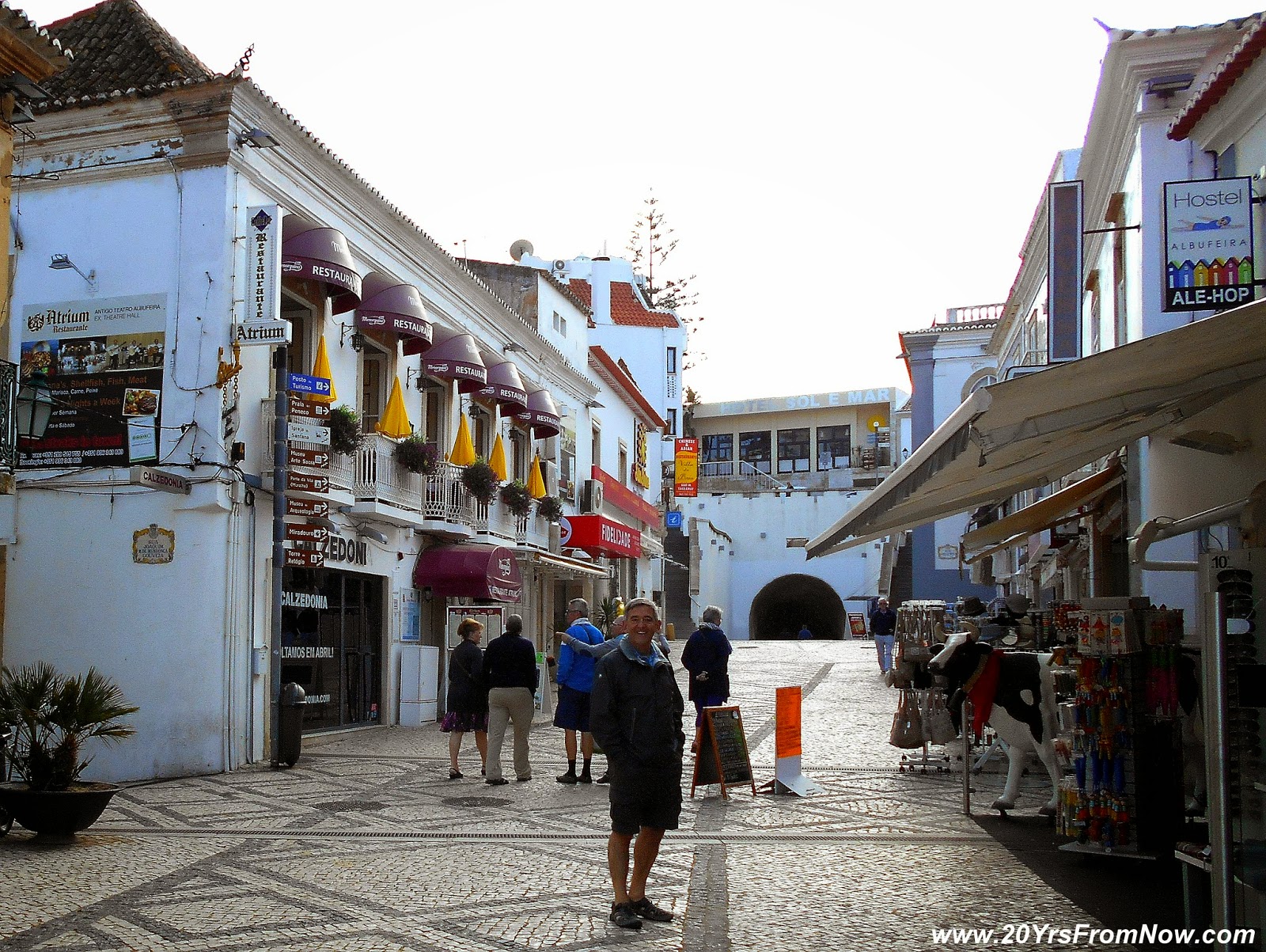 John's checking out the menu of this restaurant. We haven't tried it yet, but will before the end of the month when we leave and we'll be sure to get a table by one of the balcony windows. 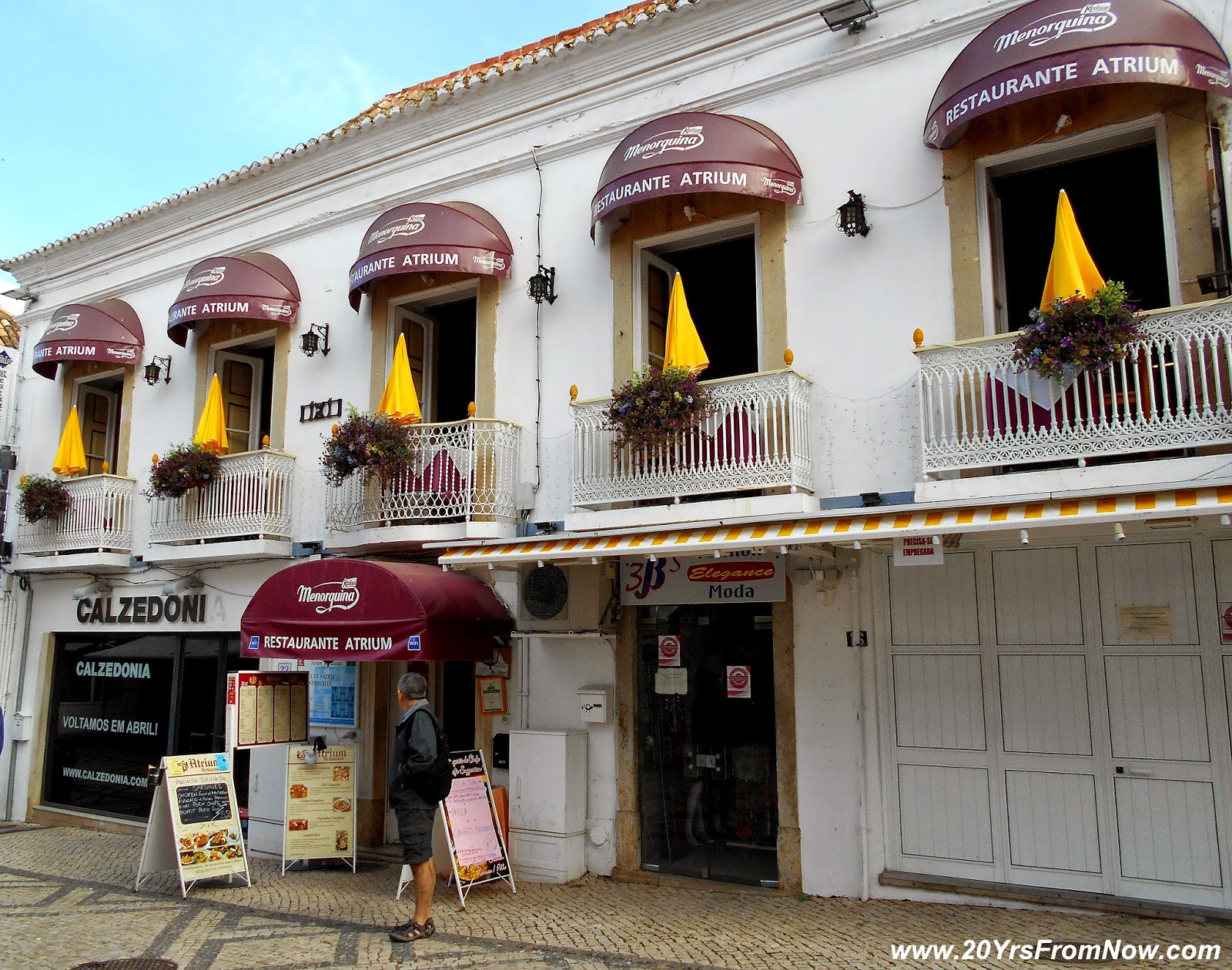 The old town is a maze of connecting streets. Shops and homes are often above or below each other and there are stairs everywhere. 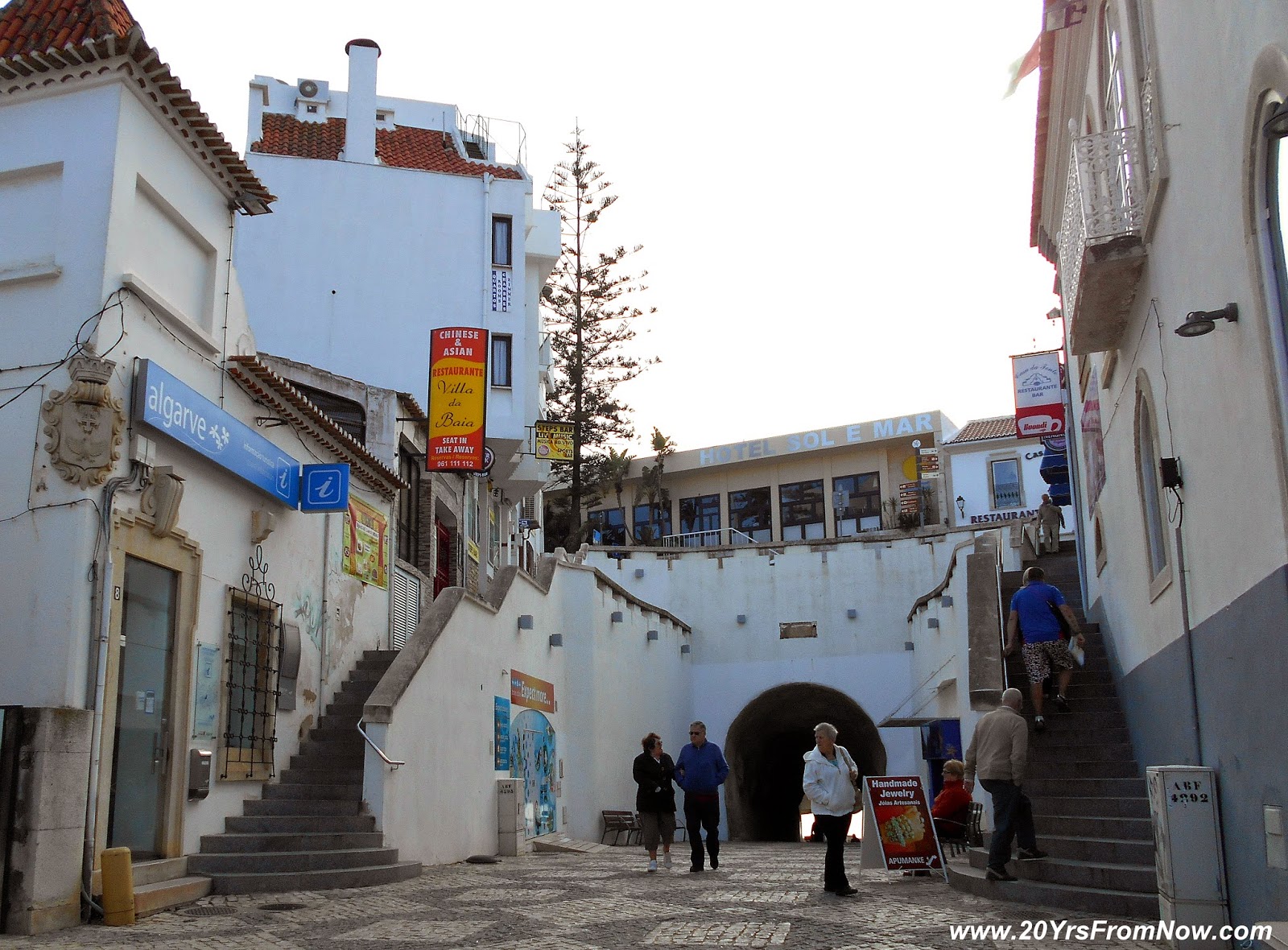 The tunnel in the centre of the above photo leads to the ocean and this gorgeous sand coloured building. 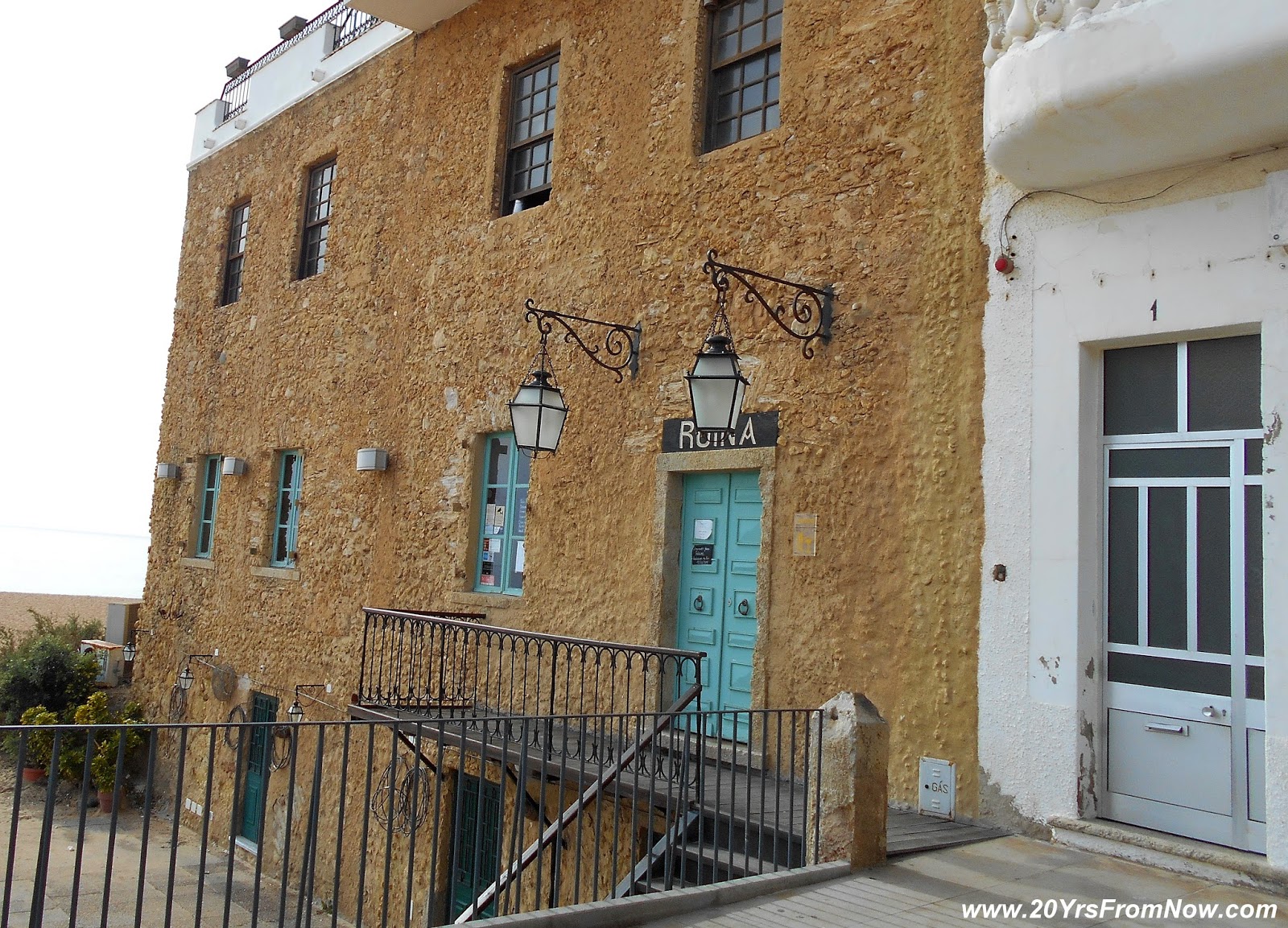 Then we returned via the tunnel to the shopping area. There's very little concrete here. The sidewalks are mosaics made of grey and white stones that are as smooth as marble. 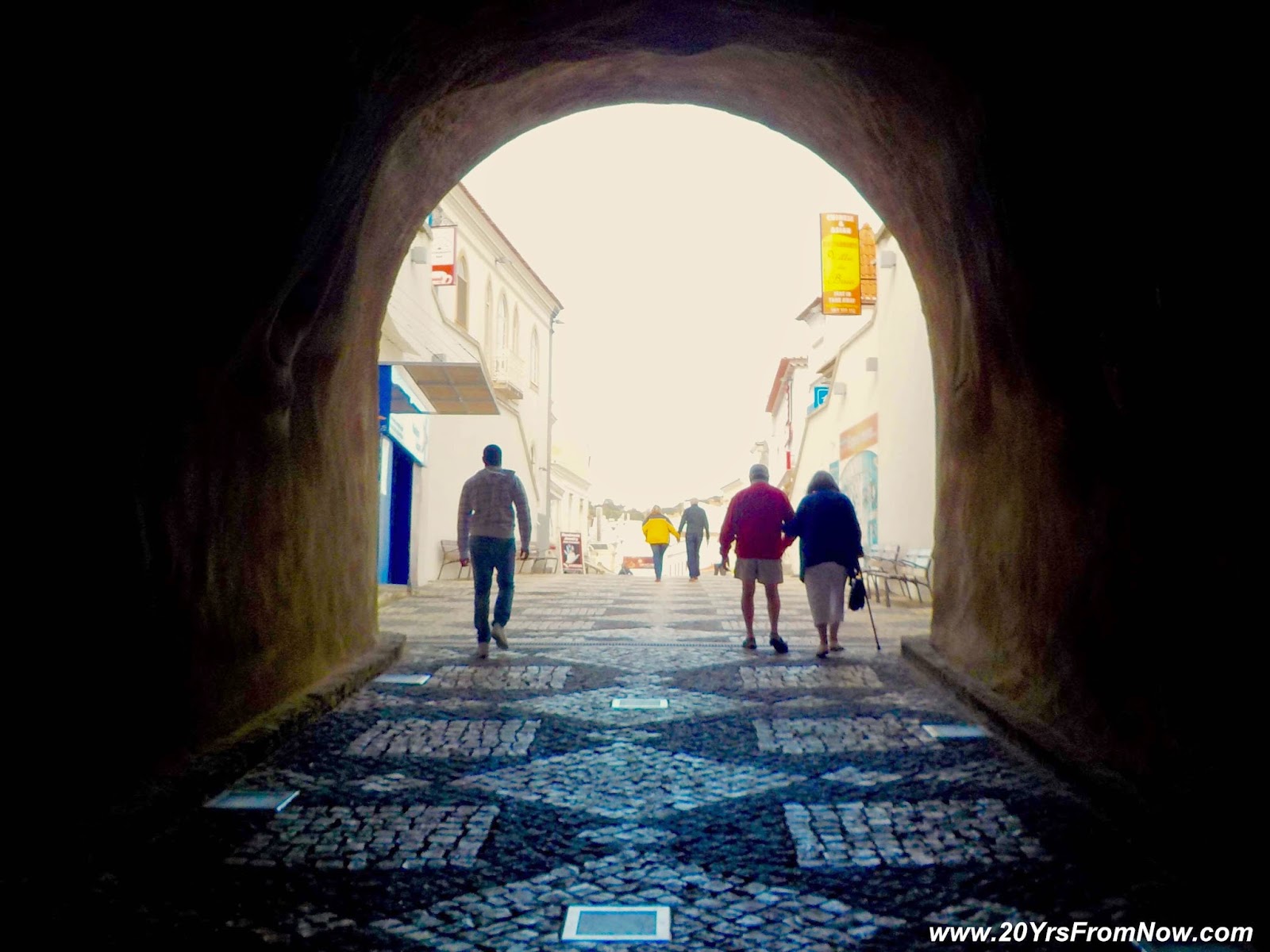 This is the view from the top of the stairs. 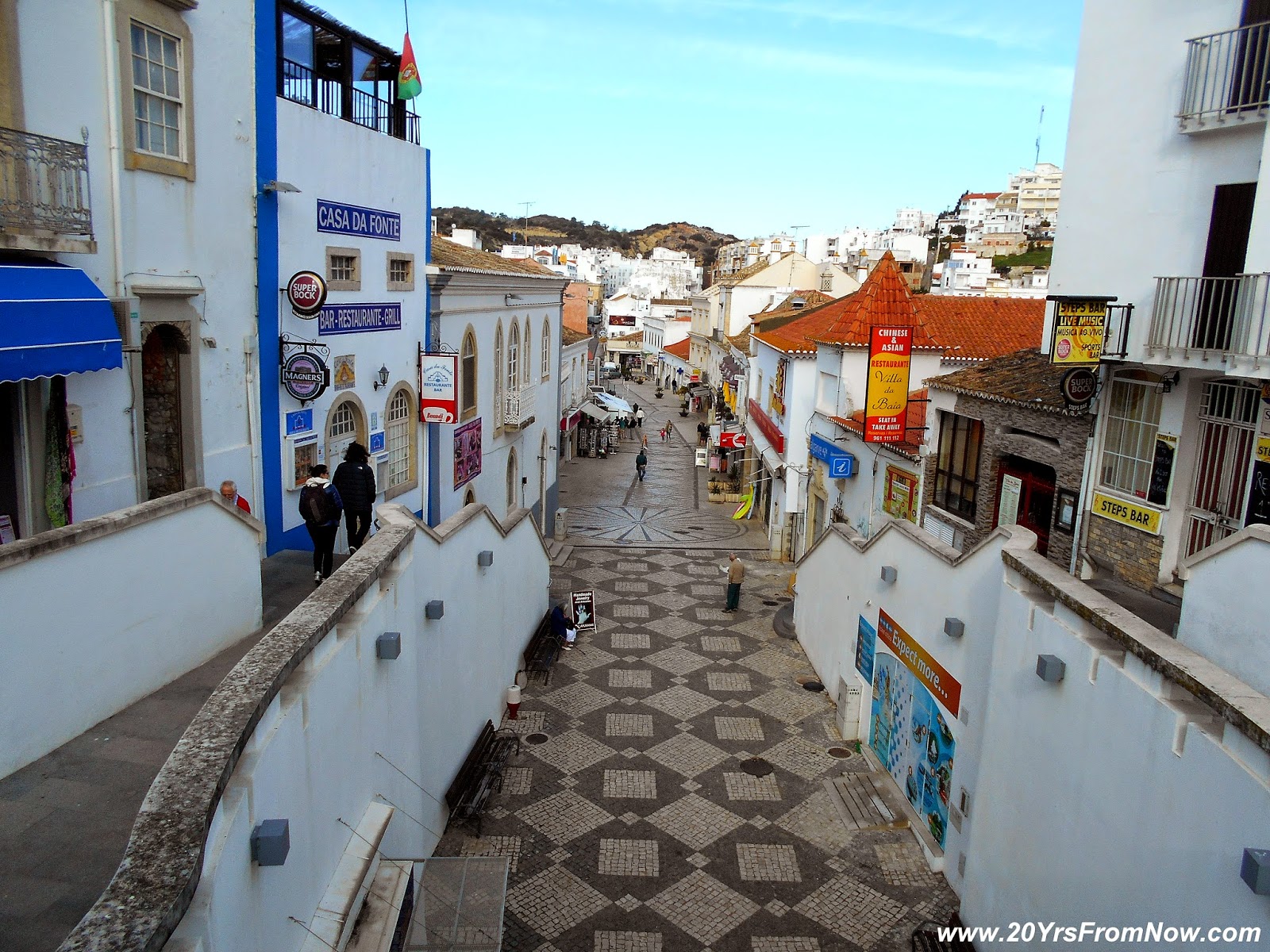 The Church of St. Sebastian is now a museum for religious artifacts. 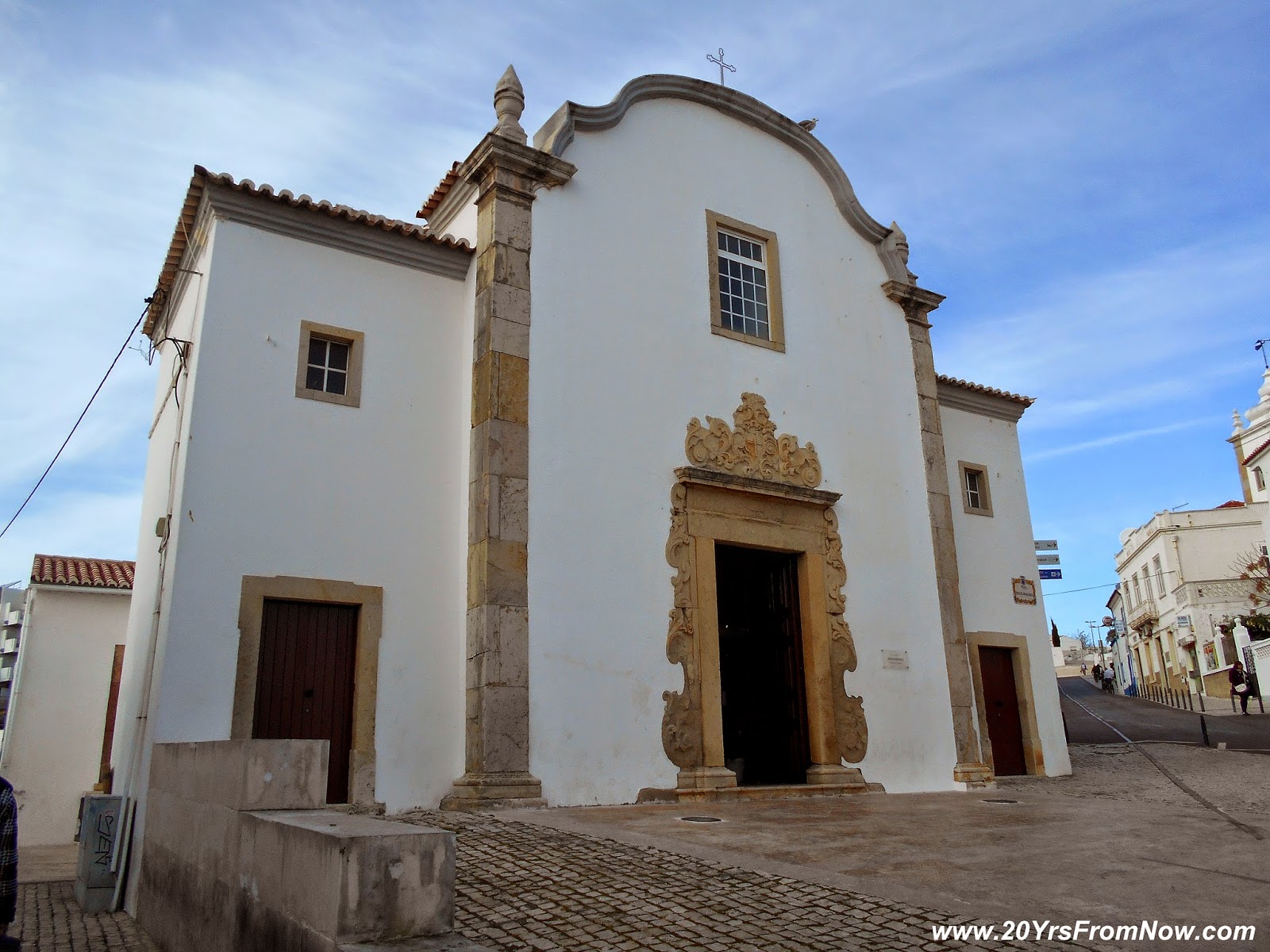 However, the alter is still the highlight of one's visit. 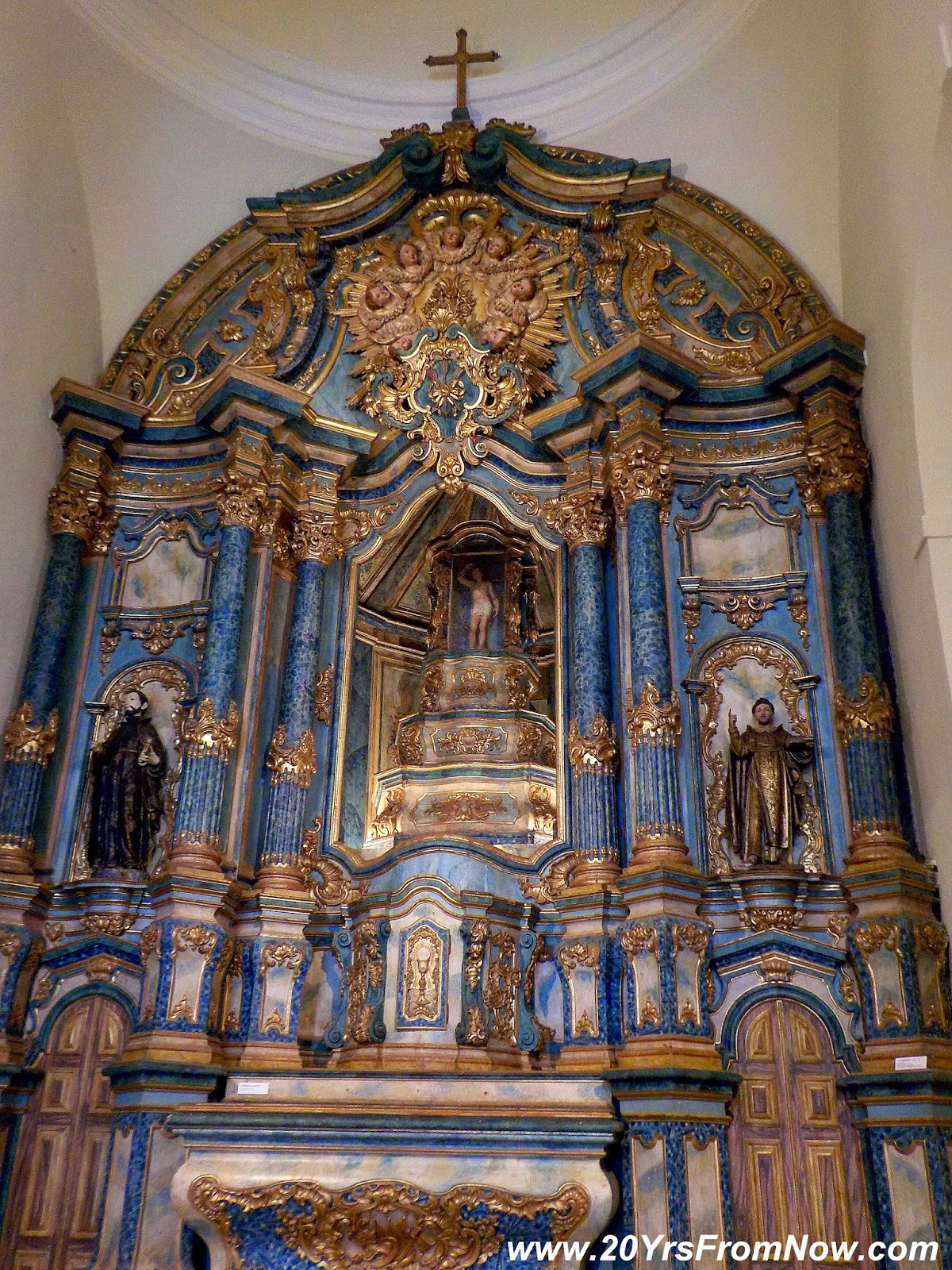 The town's beginnings can be traced back to the Romans when it was called Baltum. Trading with North Africa eventually led to Moors settling throughout the Algarve. See that arch behind us? A mosque used to be on site but eventually was replaced by a Christian church that was destroyed in the 1755 earthquake. All that remains today is the arch. 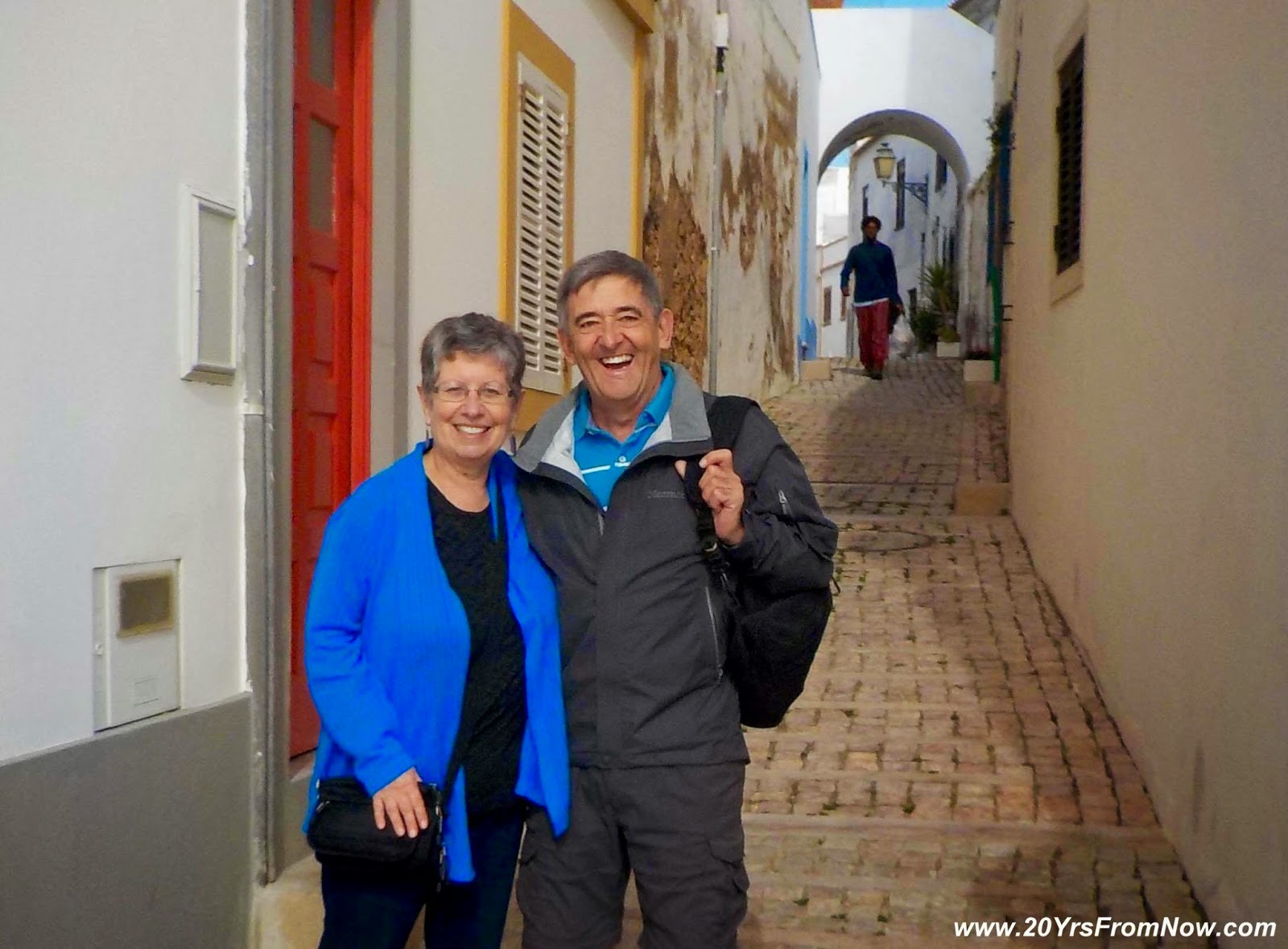 Tiles are commonplace. They're used to create street signs or on the exterior of buildings. 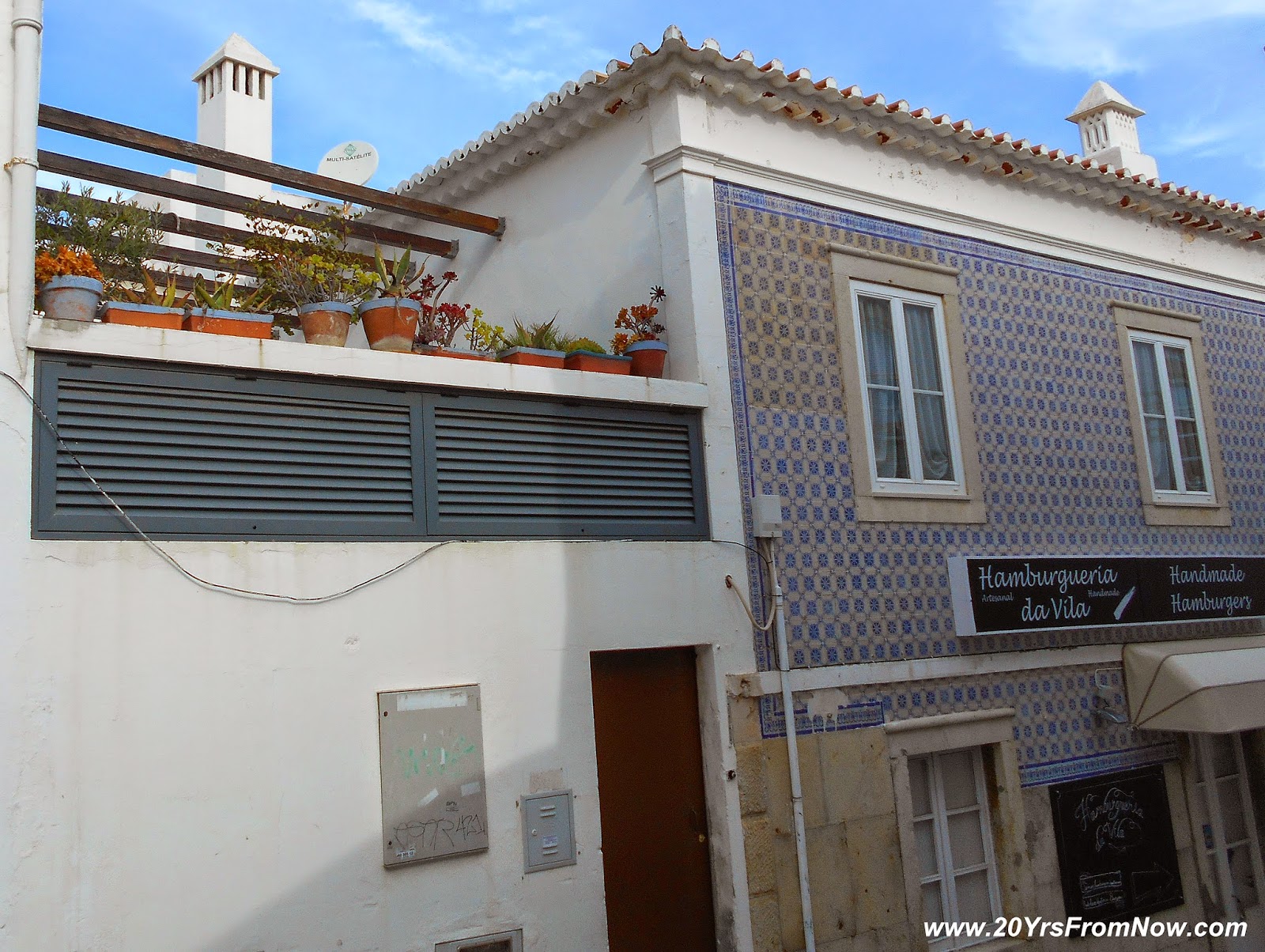 Most buildings are white or cream colour but sometimes there's a splash of something bolder. 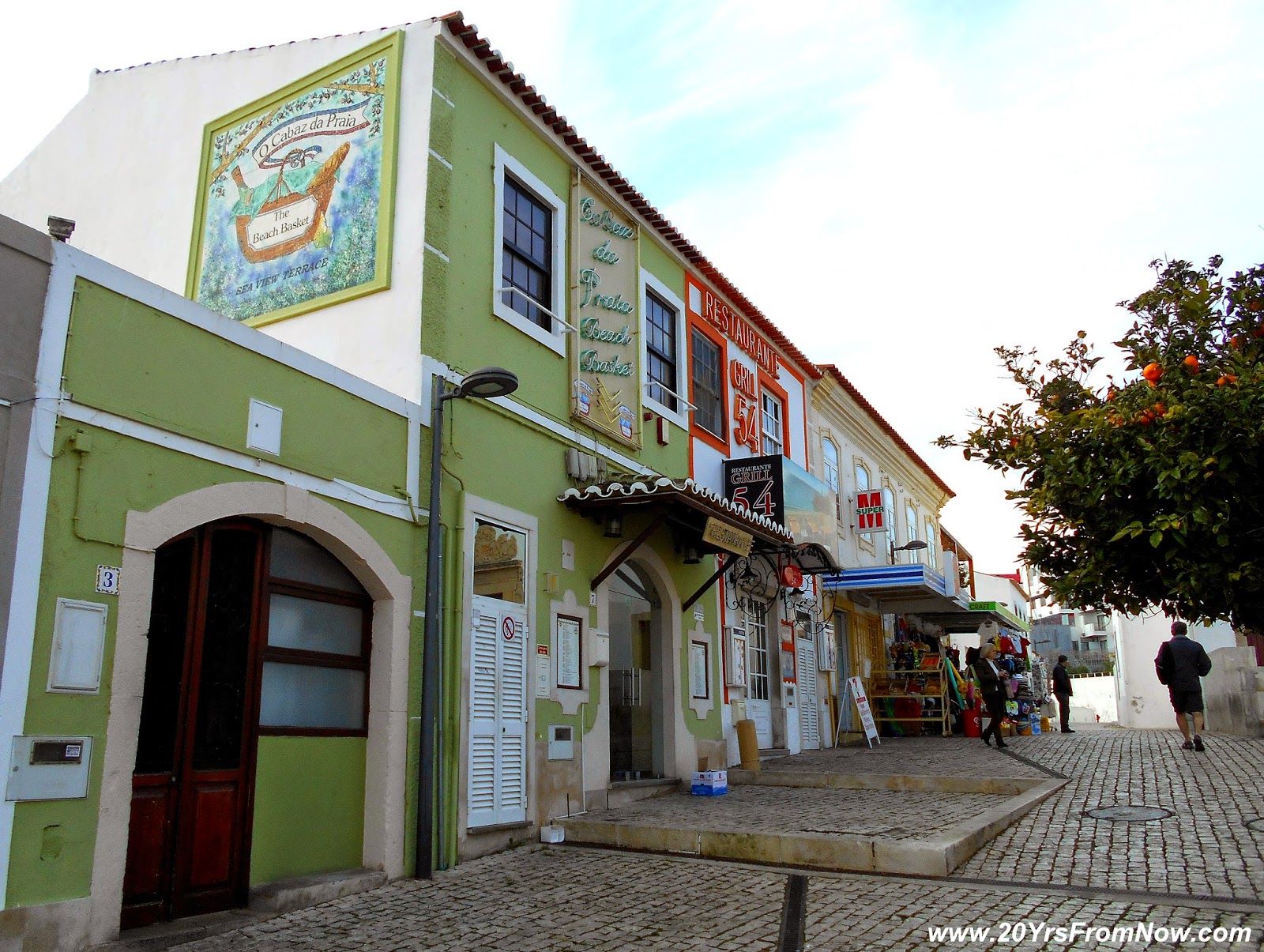 The Bell Tower has 8 bells and chimes on the hour. Did you notice the orange tree? 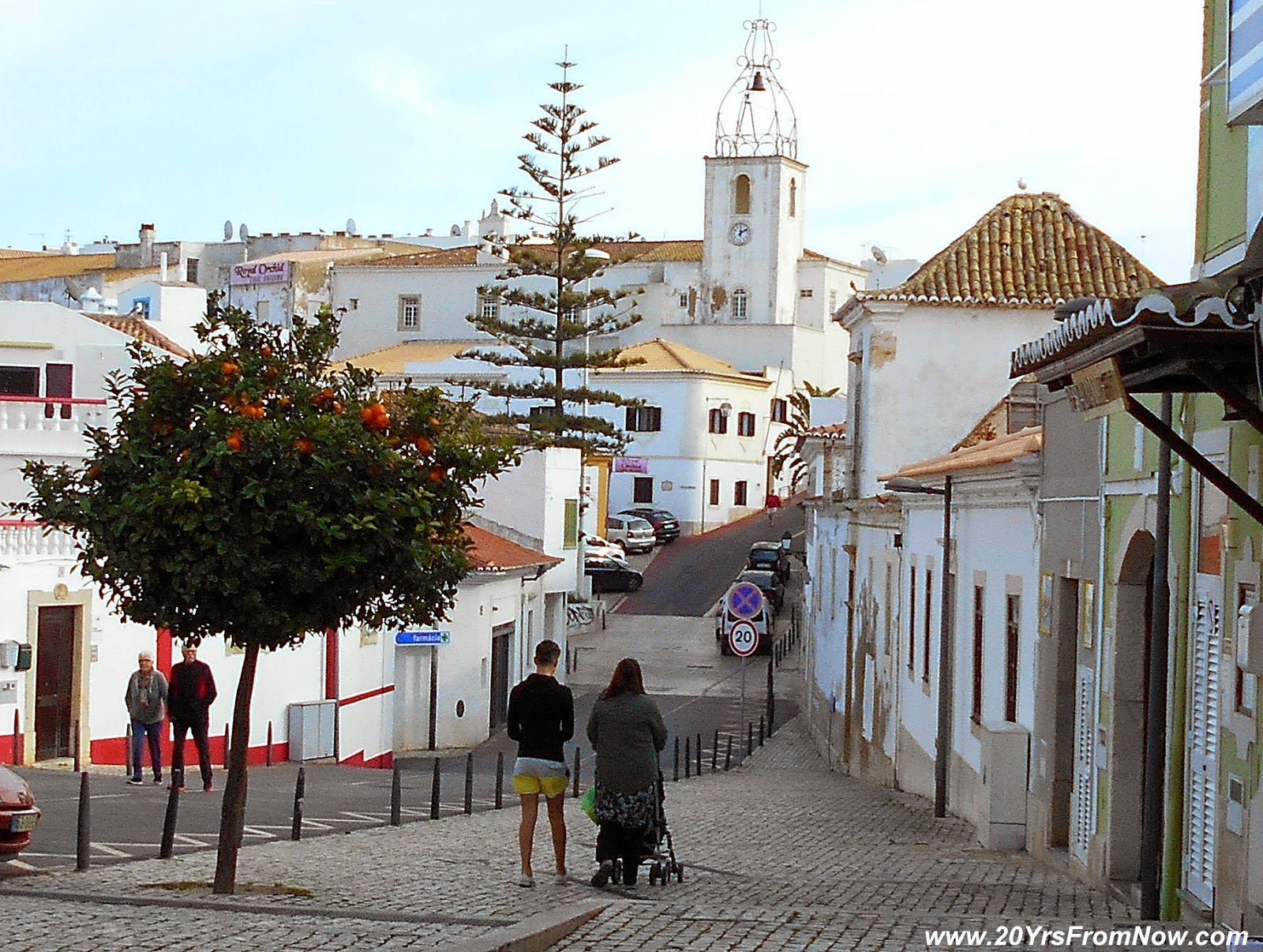 Back down at sea level at Fisherman's Beach is this sculpture dedicated to Albufeira's maritime past. 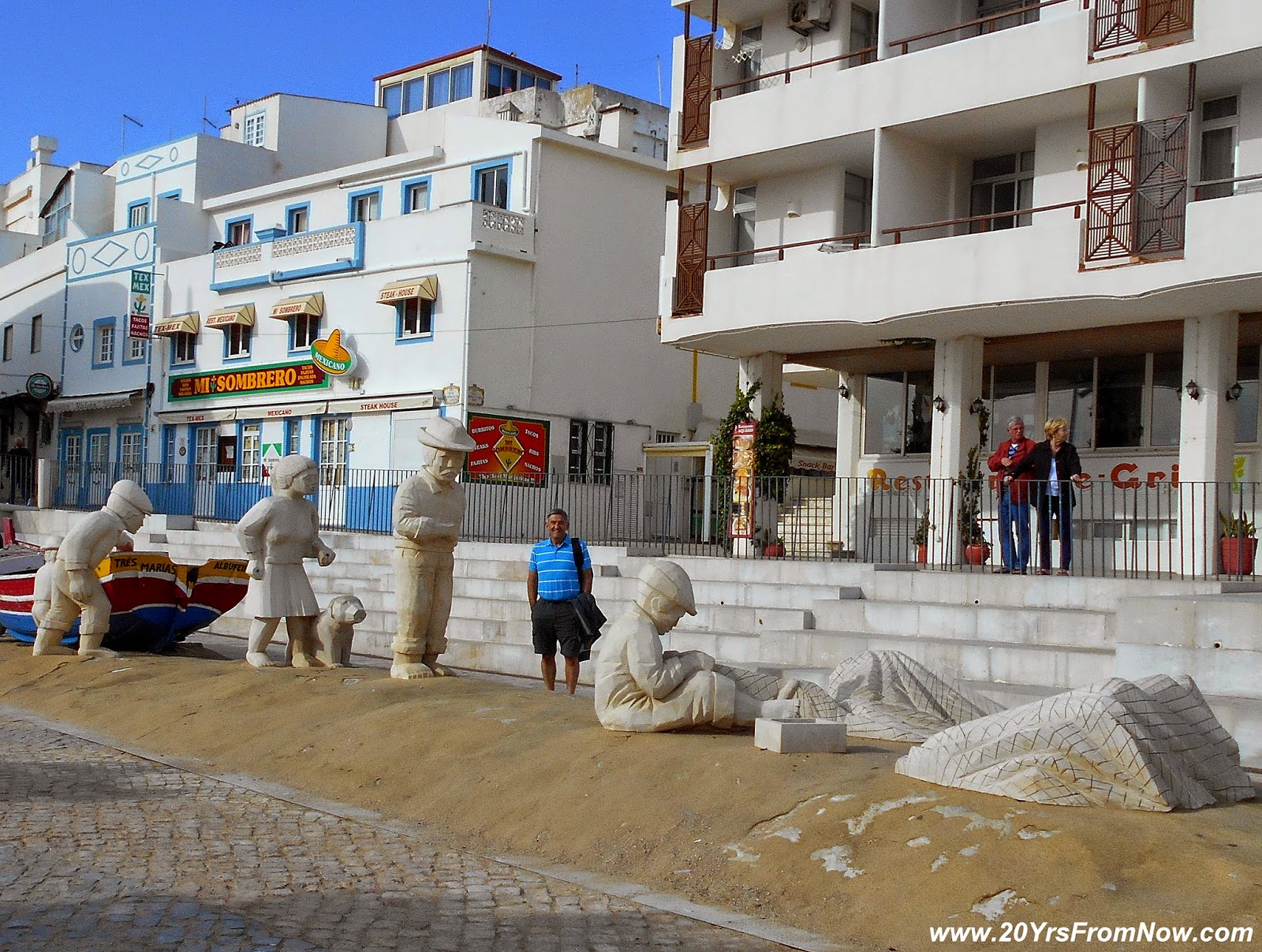 Returning to the eastern part of town and our apartment involves climbing the cliffs - or if you're lazy like us taking the escalator! 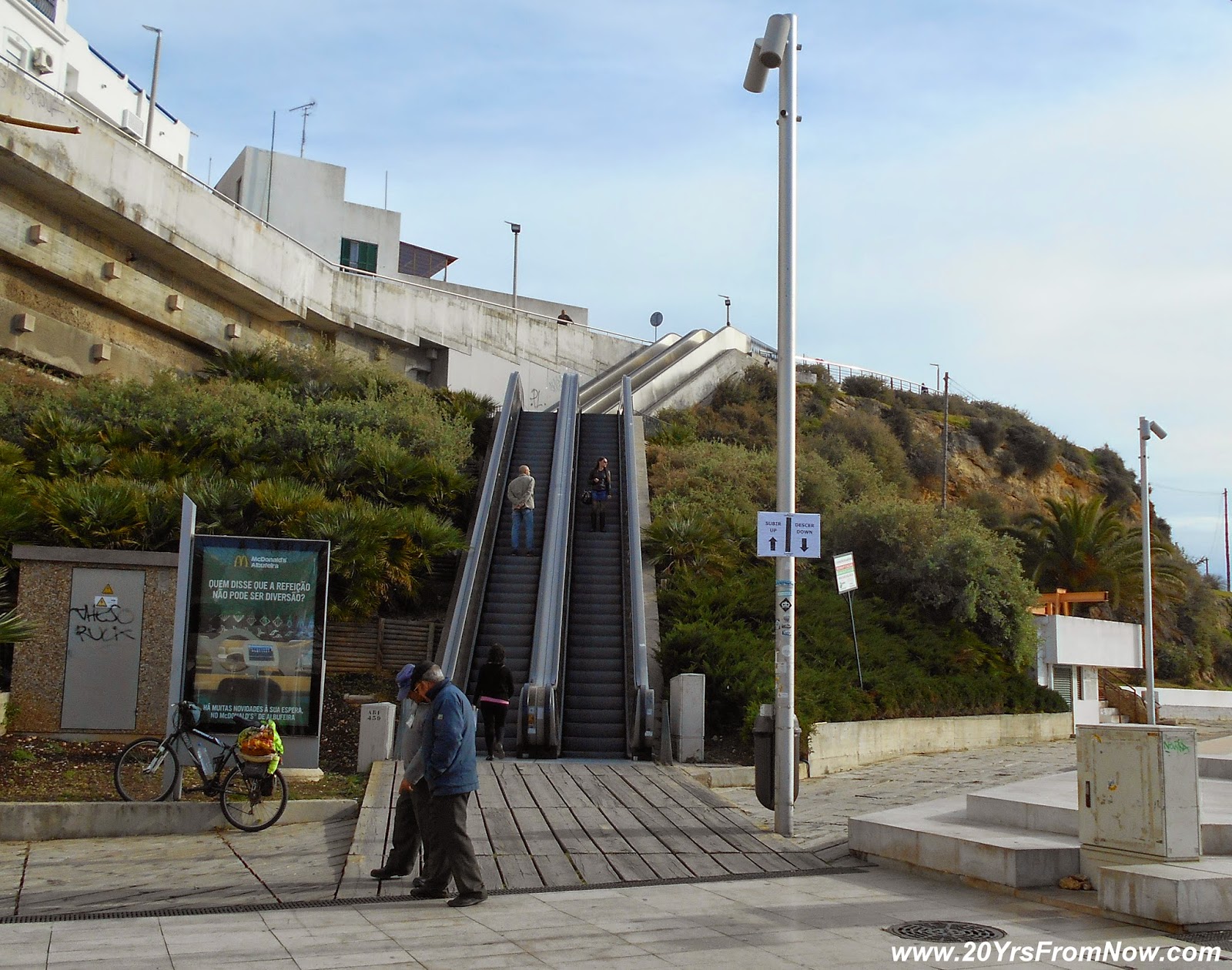 The view at the top is spectacular... 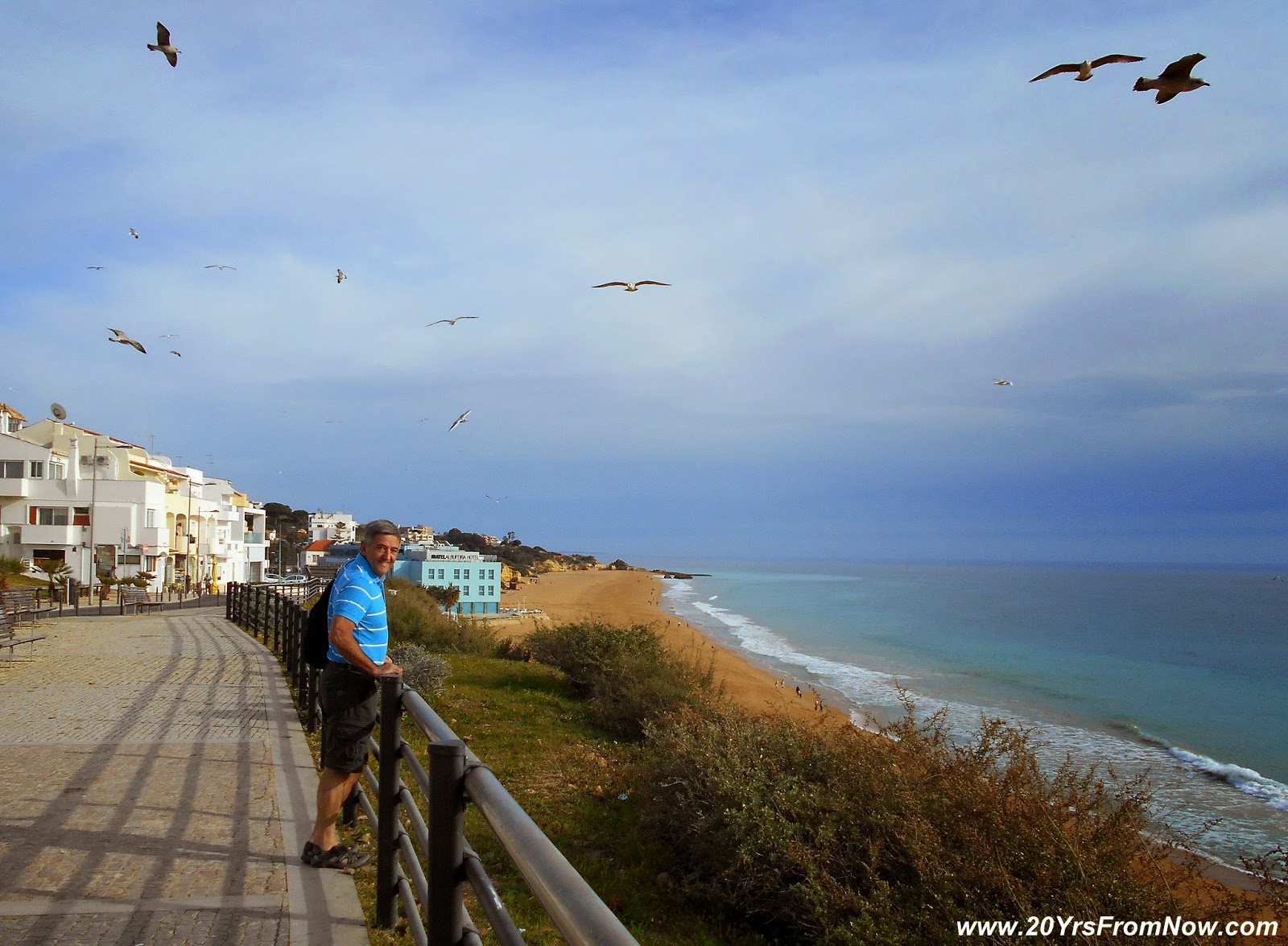 ...while the various sizes and shapes of homes along the stroll back are varied and impressive. 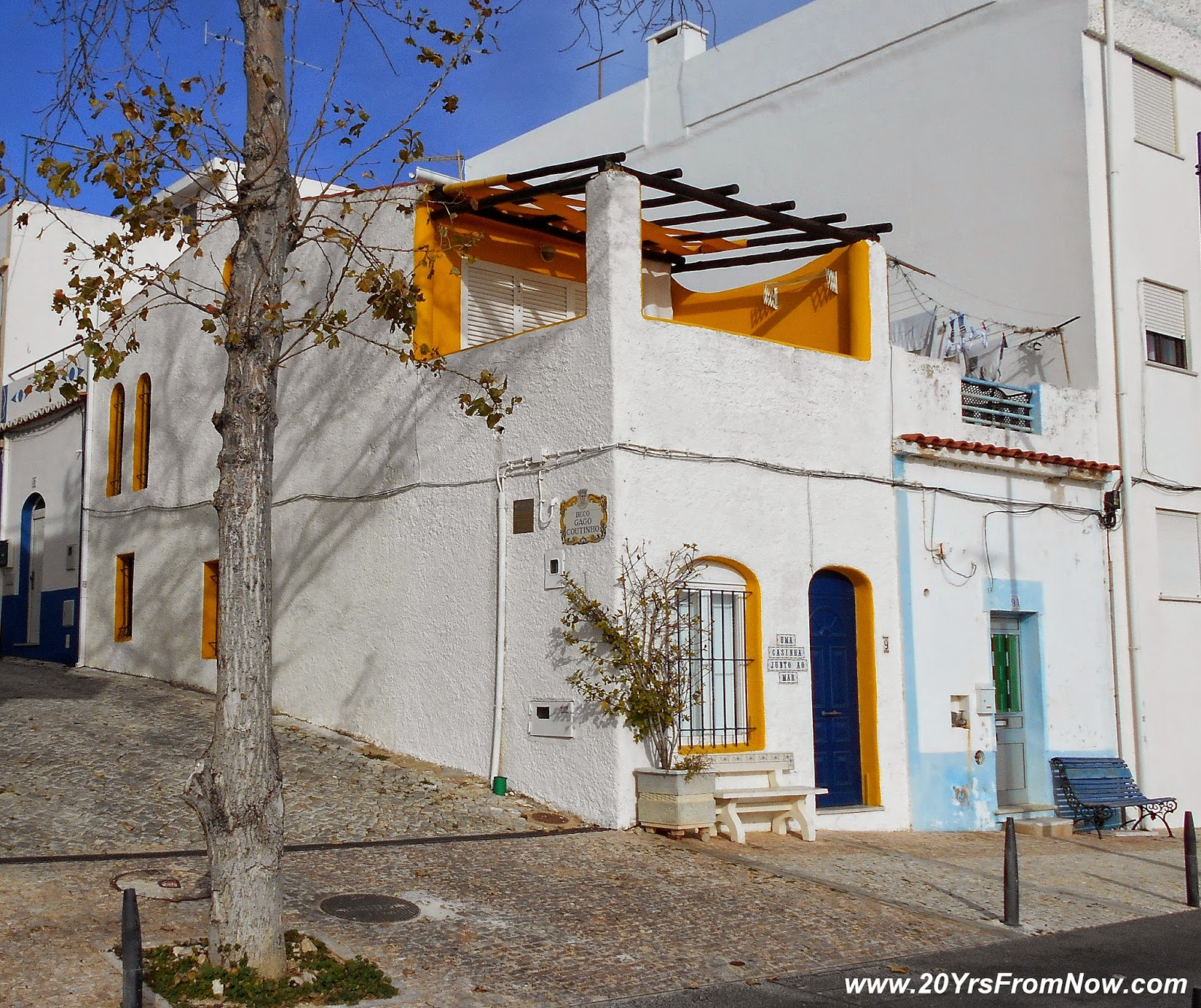 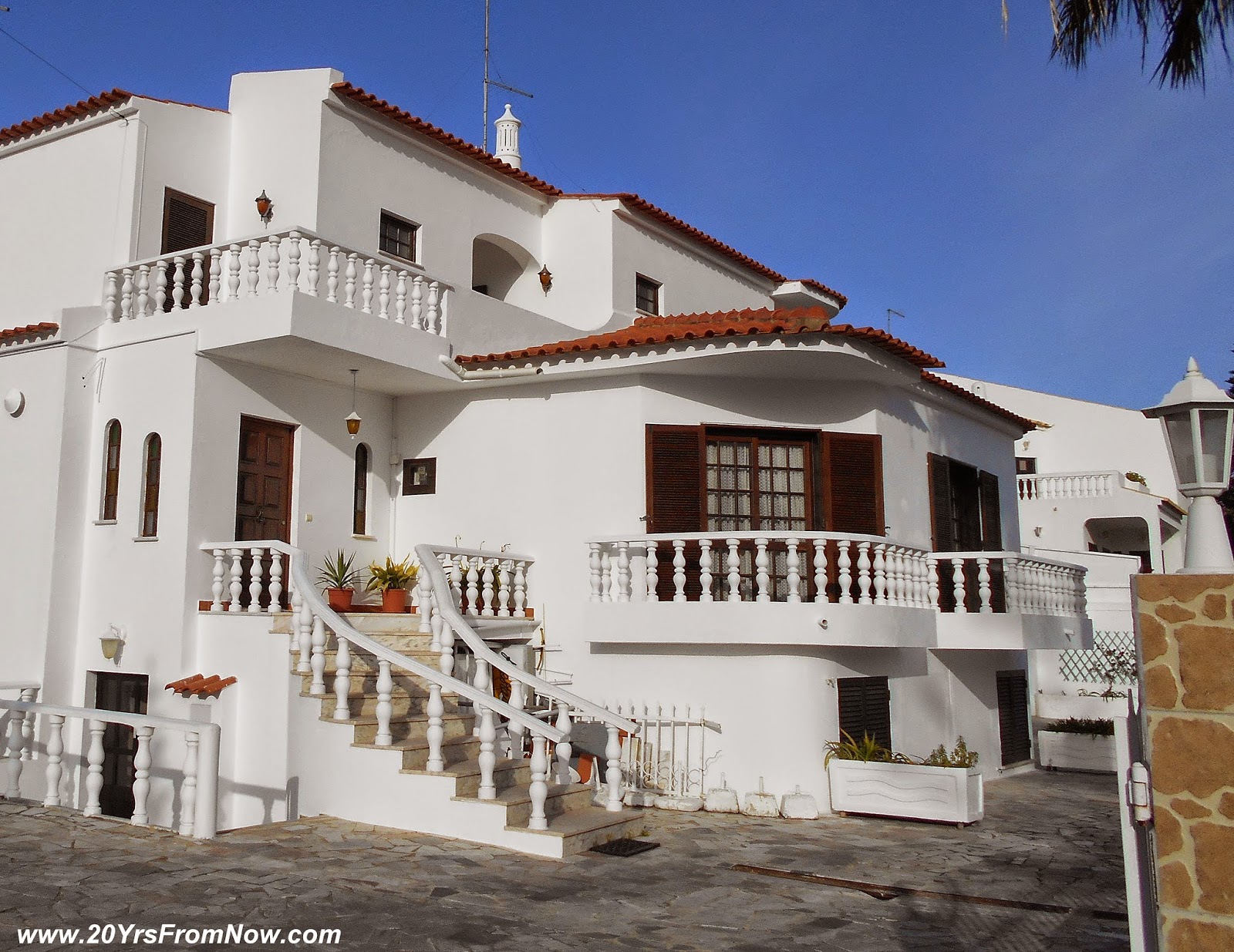 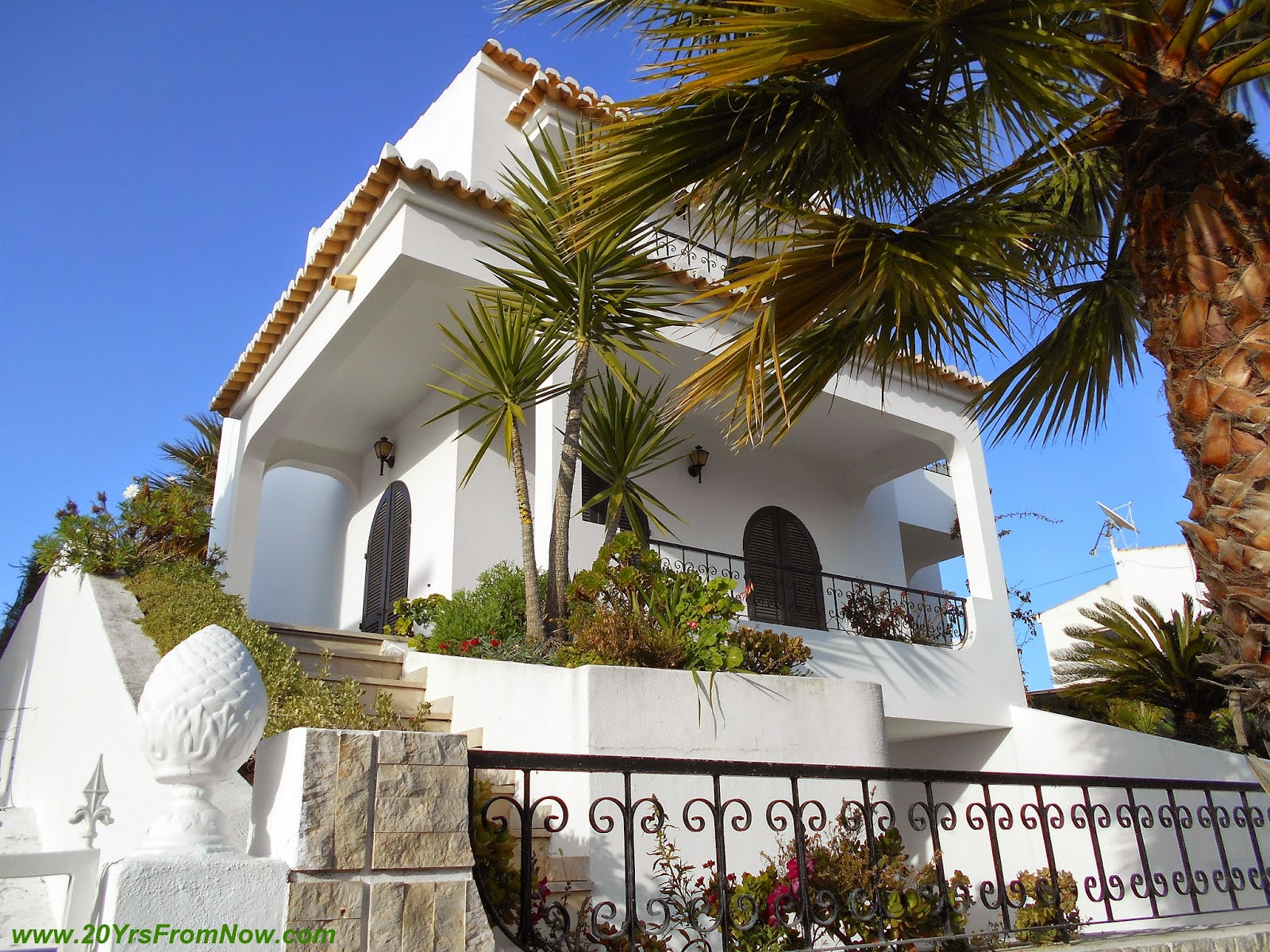 I snapped the next photo because of the height of the poinsettia tree. 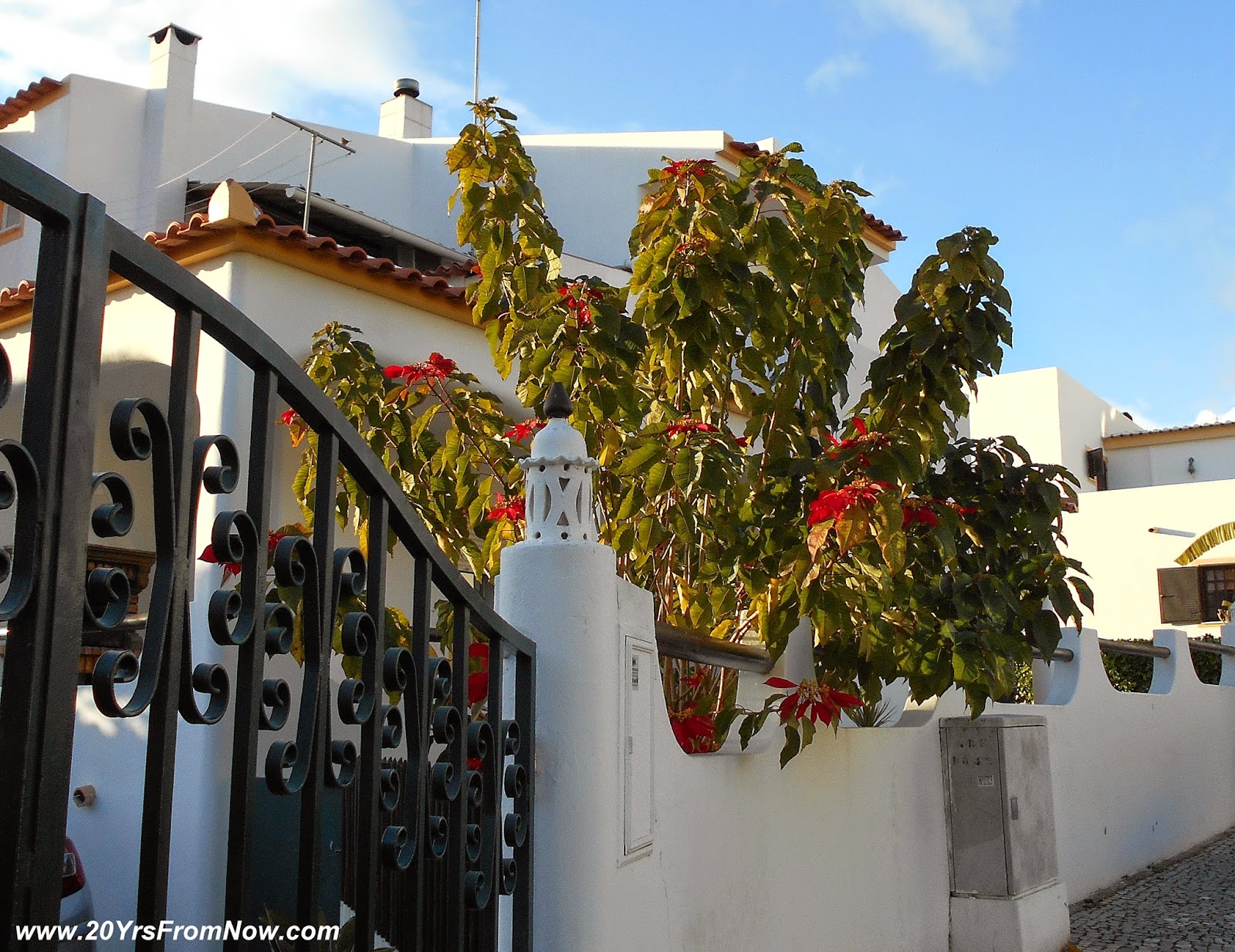 It's not difficult to understand why four thousand expats have made Albufeira their home. From the scenery to the climate to the locally produced food and wine what's not to love?!