It's All About The Food

No doubt you've heard Meghan Trainor's hit song "All About That Bass". Well, this post is all about the food. The joy of experiencing a different place and culture naturally involves eating. There's something intimate and enticing in discovering the variances of what is familiar and there's nothing better than becoming acquainted with something new and unexpected.

Let's begin by stating the obvious. We're not food critics or gourmet aficionados. We're just two Canadian retirees who know what we like and what we don't. Offer us a simple yet tasty meal made with fresh, natural ingredients served in an unpretentious setting and 99.9% of the time we'll leave happy and satisfied and will rave about it ad nauseam.

The downside is we rarely eat out at home. Being served a frozen, lifeless entree that can be purchased in a grocery store and thawed in our own home is not our idea of time or money well spent. Being expected to pay an arm and a leg for said meal is also a turn off. Since our arrival in Europe I've only become more critical and dismayed at the state of our so-called food industry. I don't look forward to returning to Canada and having little real choice about the food I eat. Consumers should be allowed to make up their own minds about the unhealthy amounts and of sugar, salt and hormones injected and added to our food, and all contents should be printed on the label in large letters.

Okay. Enough ranting on my part. From here on in it's all about the food in Portugal's Algarve. 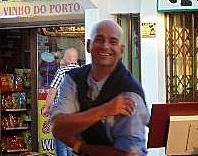 We've enjoyed many restaurant meals in Albufeira and every single one has offered mouthwatering, wholesome food. Our very first evening we savoured chicken piri-piri (barbecued Portuguese dish) at Donaldo's. If not for George, the greeter, who enticed us off the sidewalk and inside we might have missed this delightful traditional dish. Thank you, George. We enjoyed every morsel including the complimentary glass of dessert port.

Right next door is the Tamariz Restaurant. What makes it unique is locals outnumber tourists and that suggests (to us at least) the fare meets with their approval. 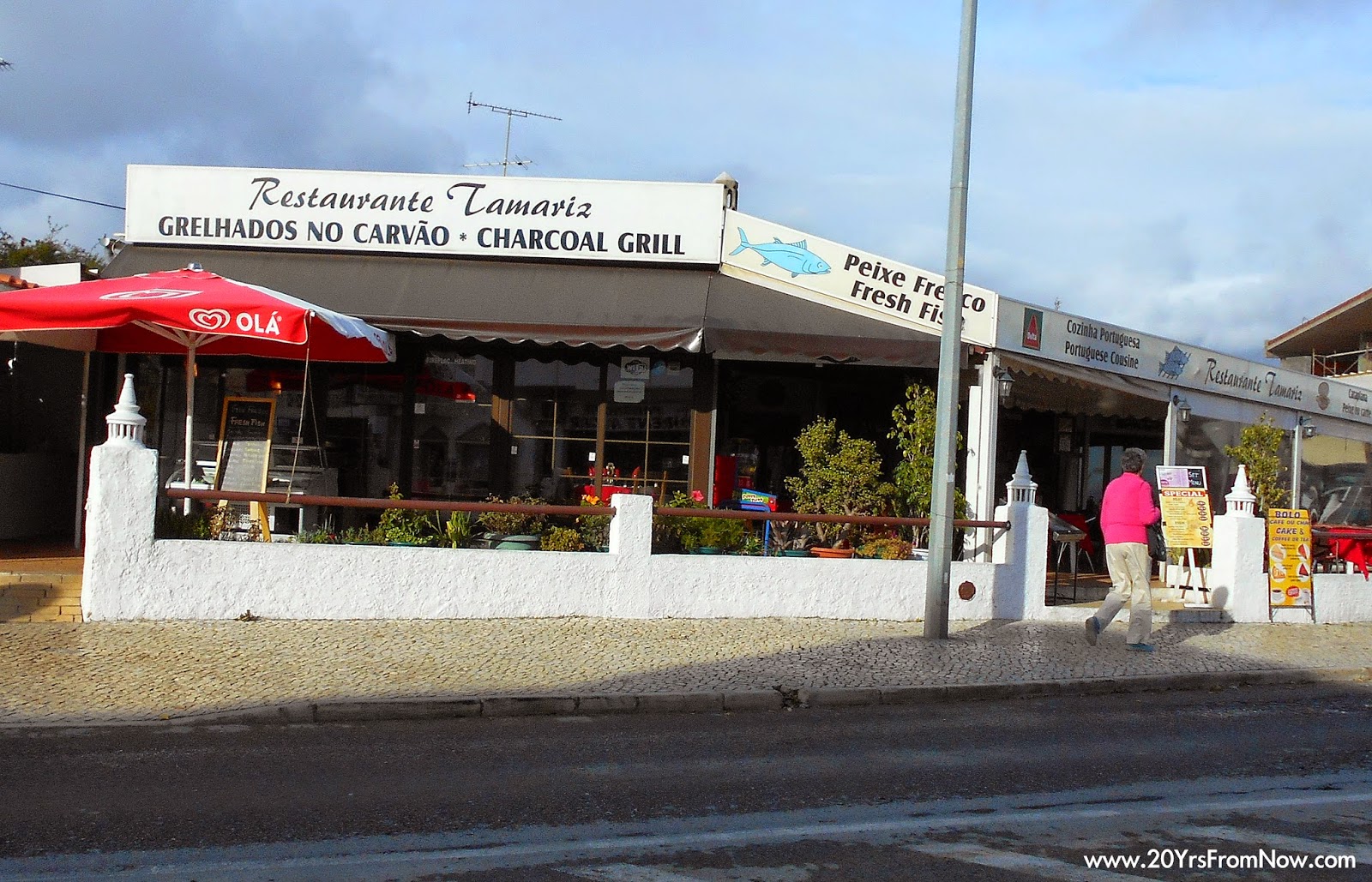 The grilled fish served with almonds, orange and banana is my favourite while John keeps going back (again and again) for the Albufeira Delight.

JoJo's Restaurante in the old section of town has both an indoor and outdoor eating area as well as a roof top terrace. We sat at the upper table far right overlooking the street. 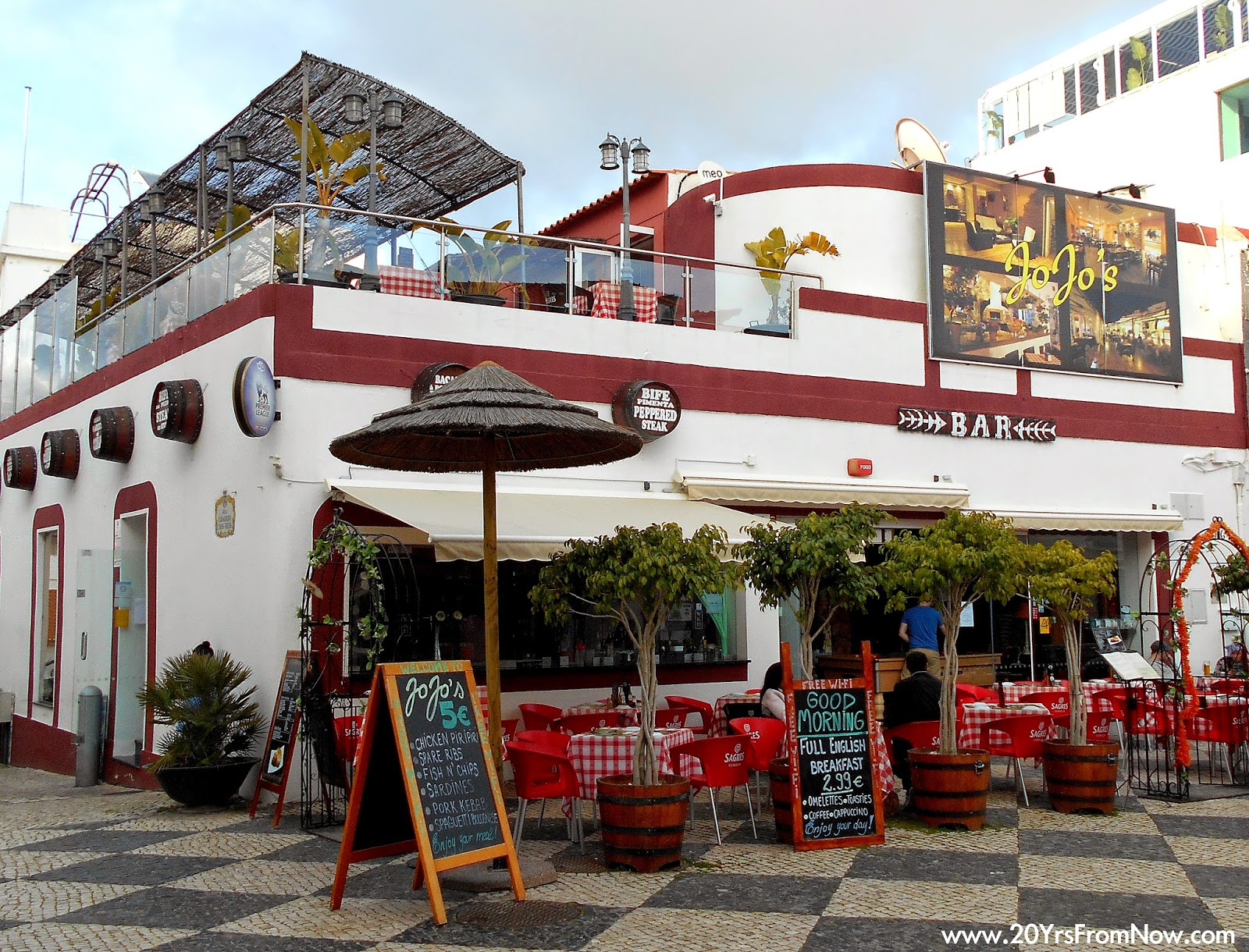 I ordered grilled sardines while John had the spareribs. We didn't stop to take photos before digging in, but I did snap one of John - although I caught him off guard. (At least he's smiling!) 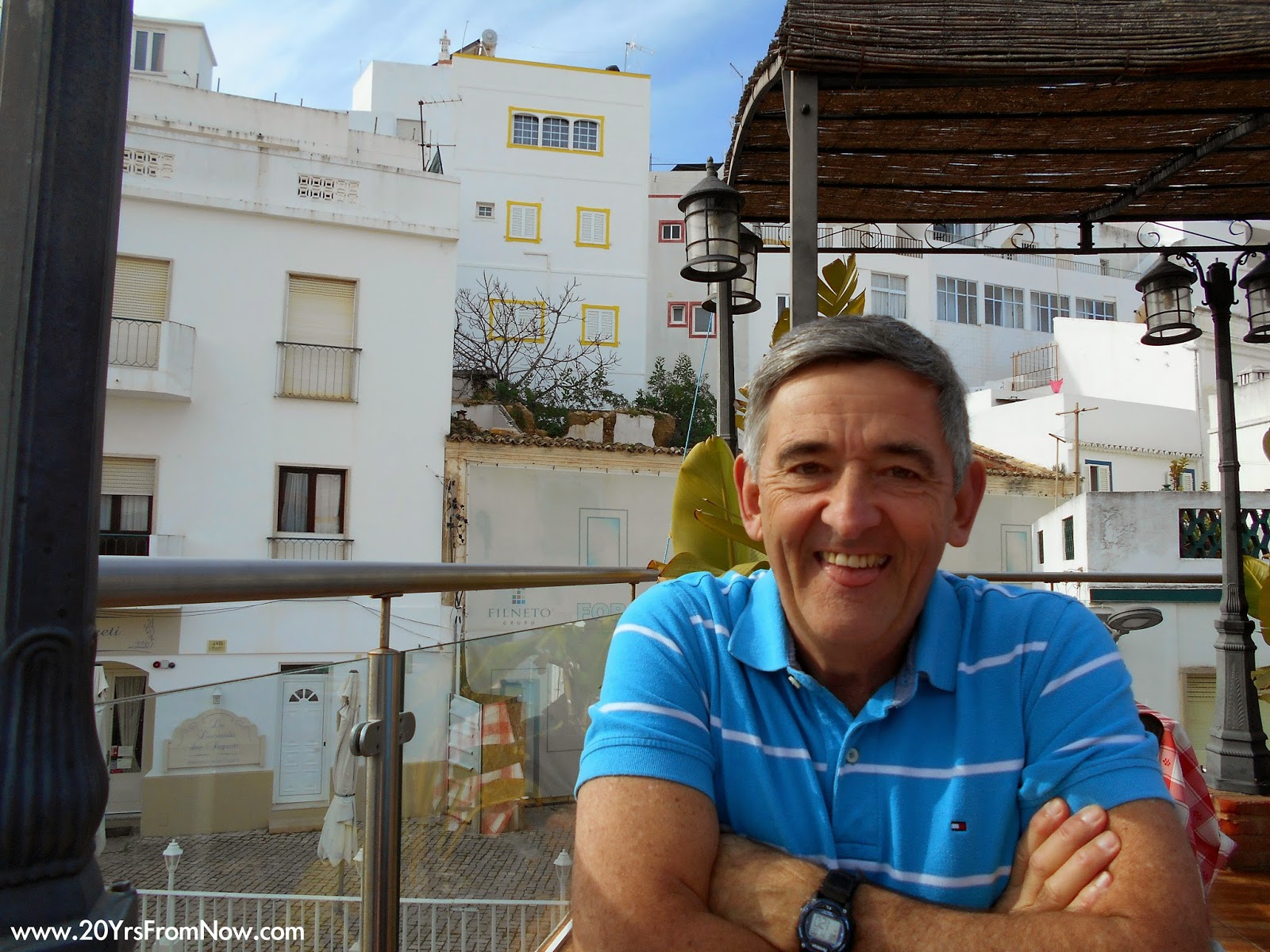 The Borda D'Aqua restaurant and bar's strength is its oceanside location. 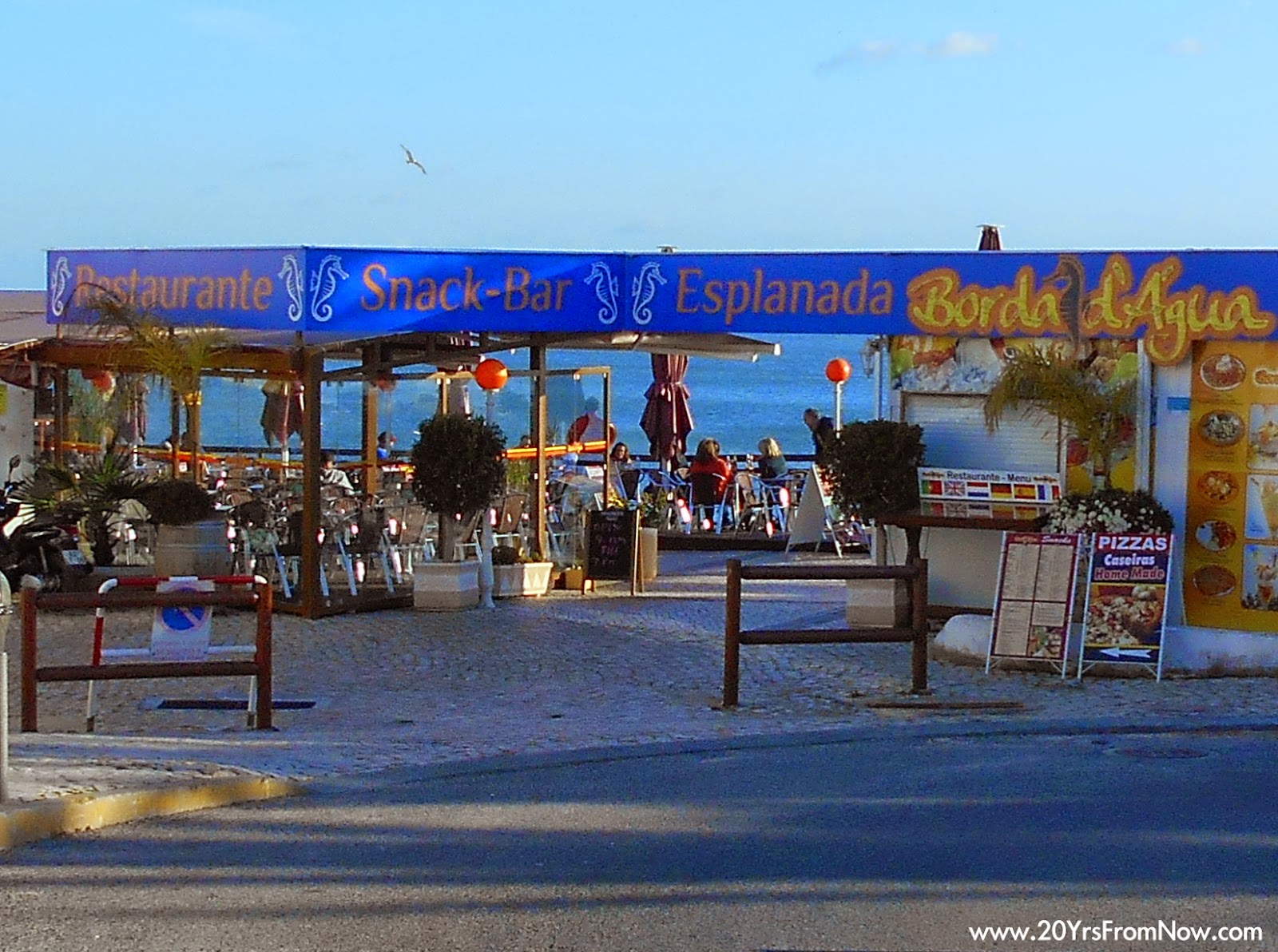 From any table it's possible to soak up the sun and listen to the waves crash onto shore. The menu is geared to those who prefer fast food with a beverage, but the thin crust Hawaiian pizza made a satisfying and tasty lunch. 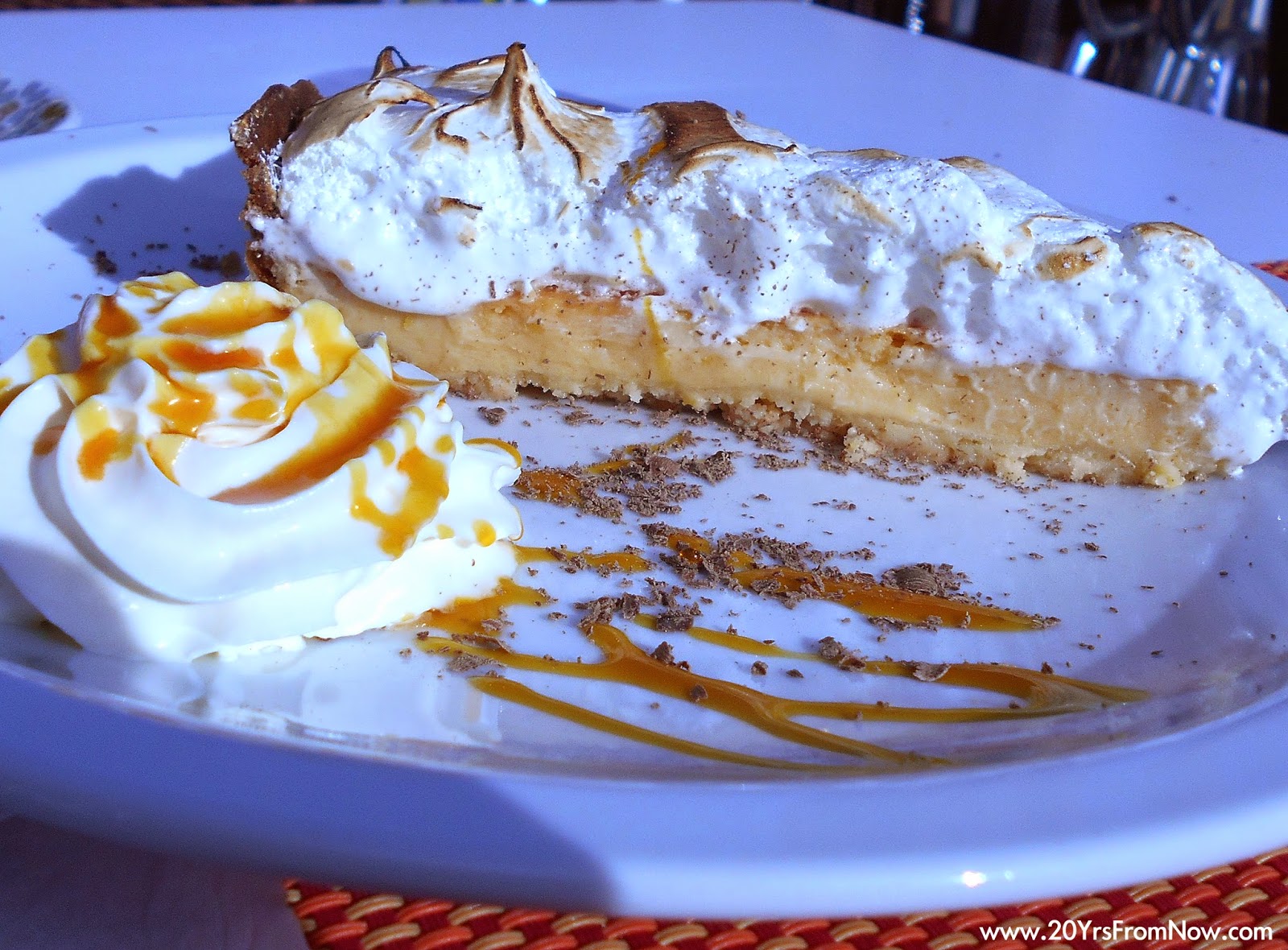 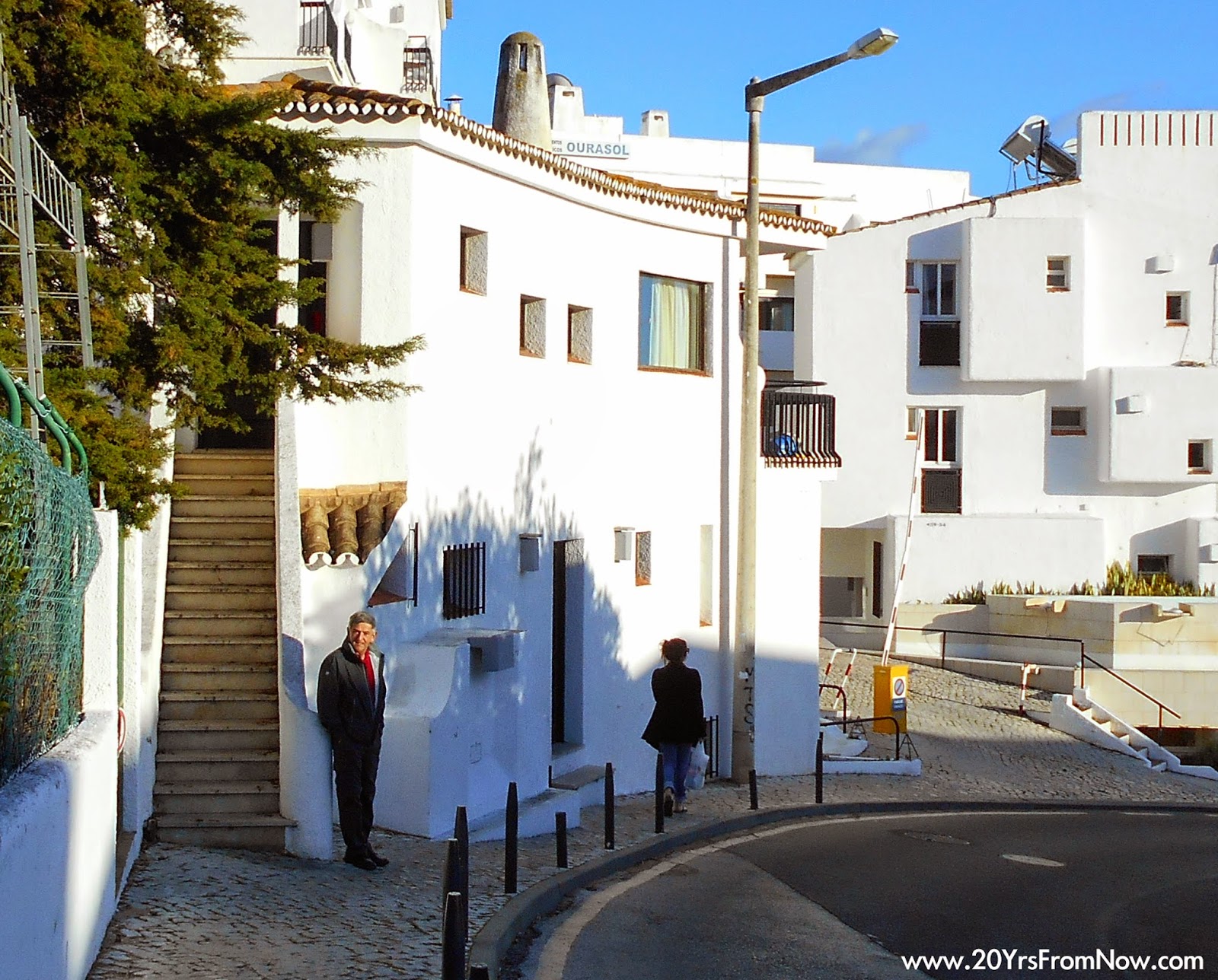 Best of all it's guilt free as one has to trek down and back up the steep and curvy 'coronary hill' as the  Borda D'Aqua Restaurant is at the very end of this street.

The Castelo do Mar, perched on a hilltop overlooking the Atlantic Ocean and Albufeira marina, is a favourite with tourists. 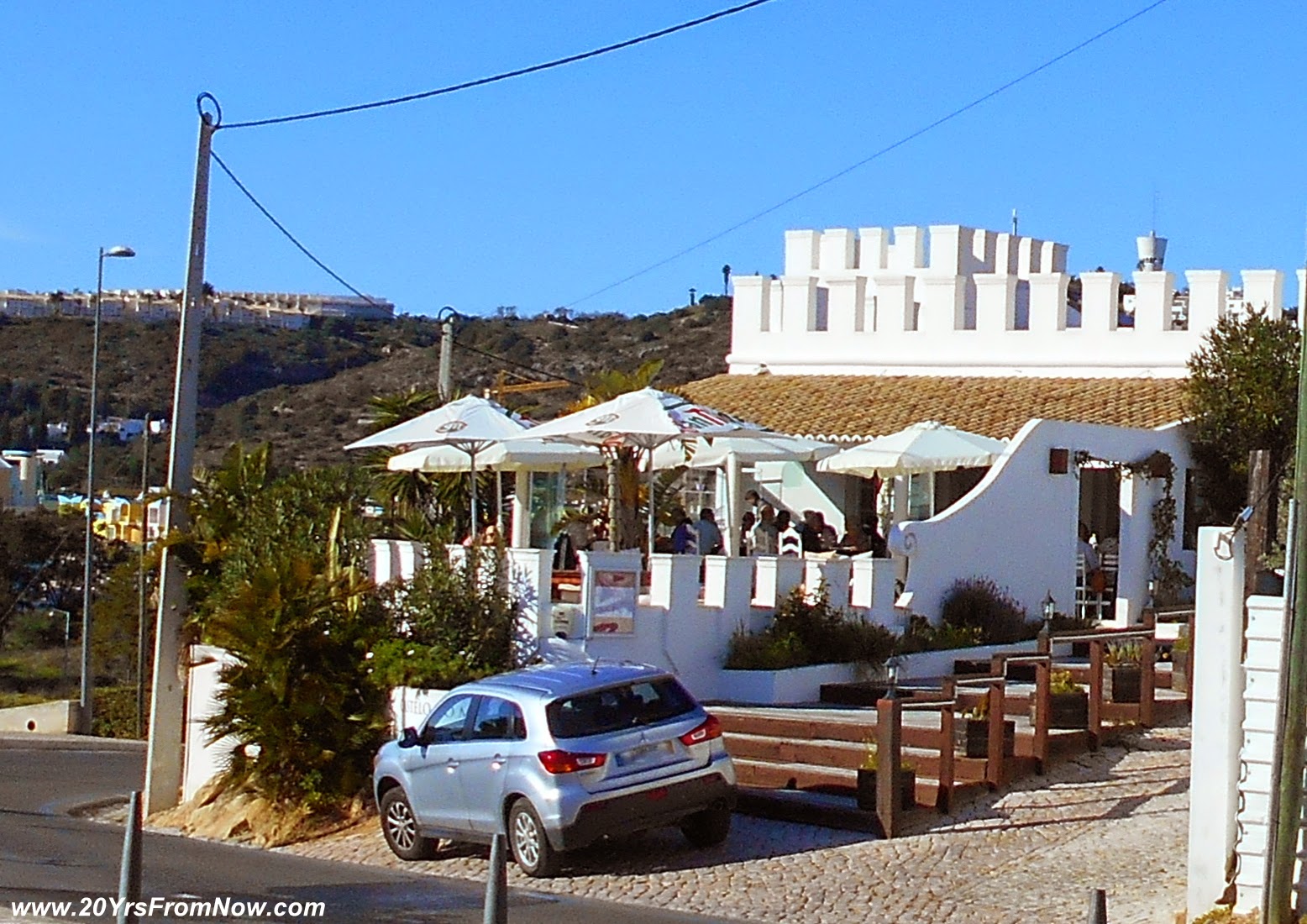 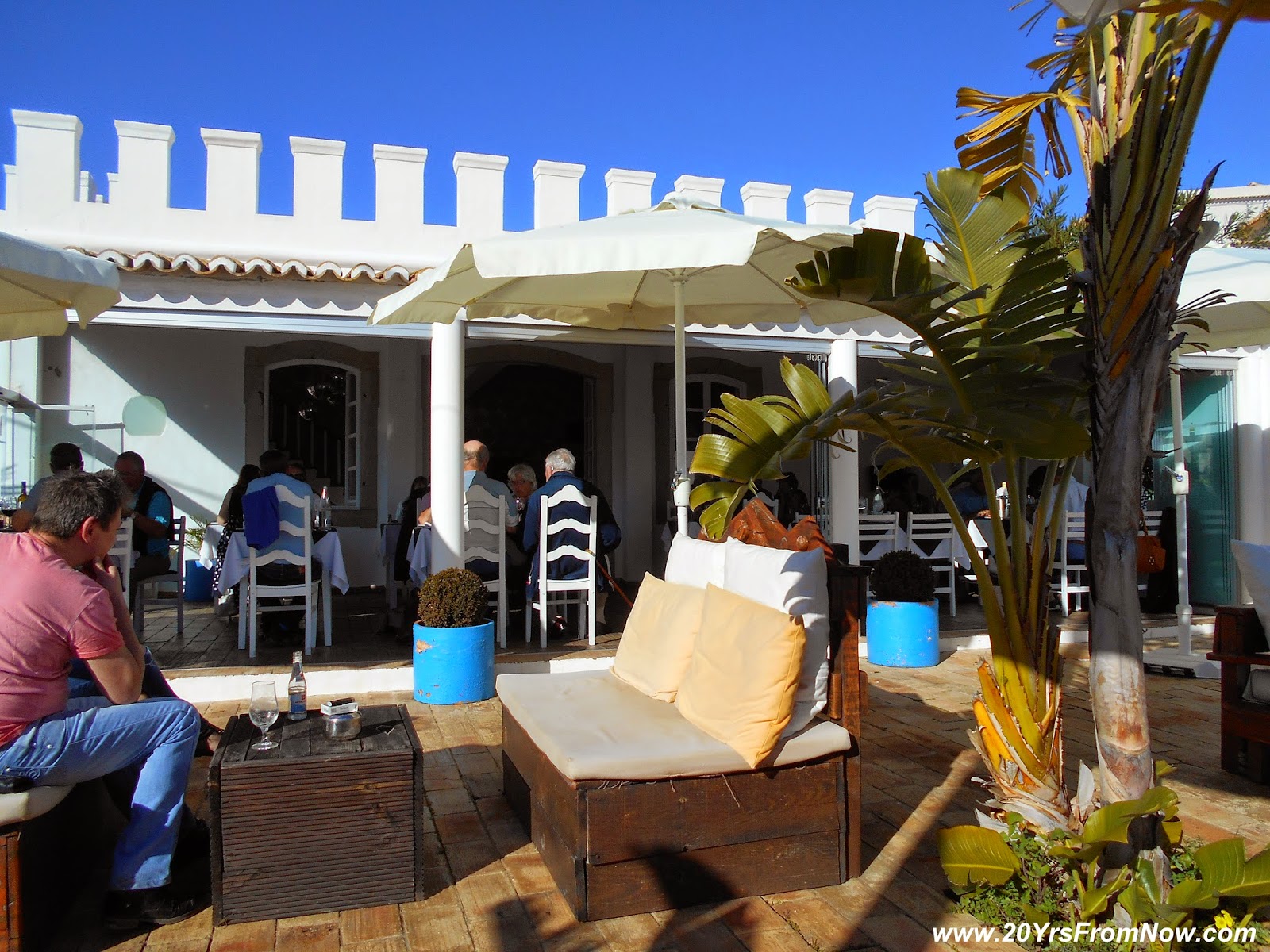 We were determined to eat at the Atrium Restaurant (header photo) and as luck would have it we stopped by on a Wednesday. Not only were we able to grab a table by the balcony AND on the menu that day was the one dish John wanted to try (Cataplana, shown above) but our meal included Fado - live music. It was truly one of those moments we'll cherish forever. If you cannot view the video below it's on Youtube.

Of course, the apple dessert was literally the icing on the cake - or in this case pie! 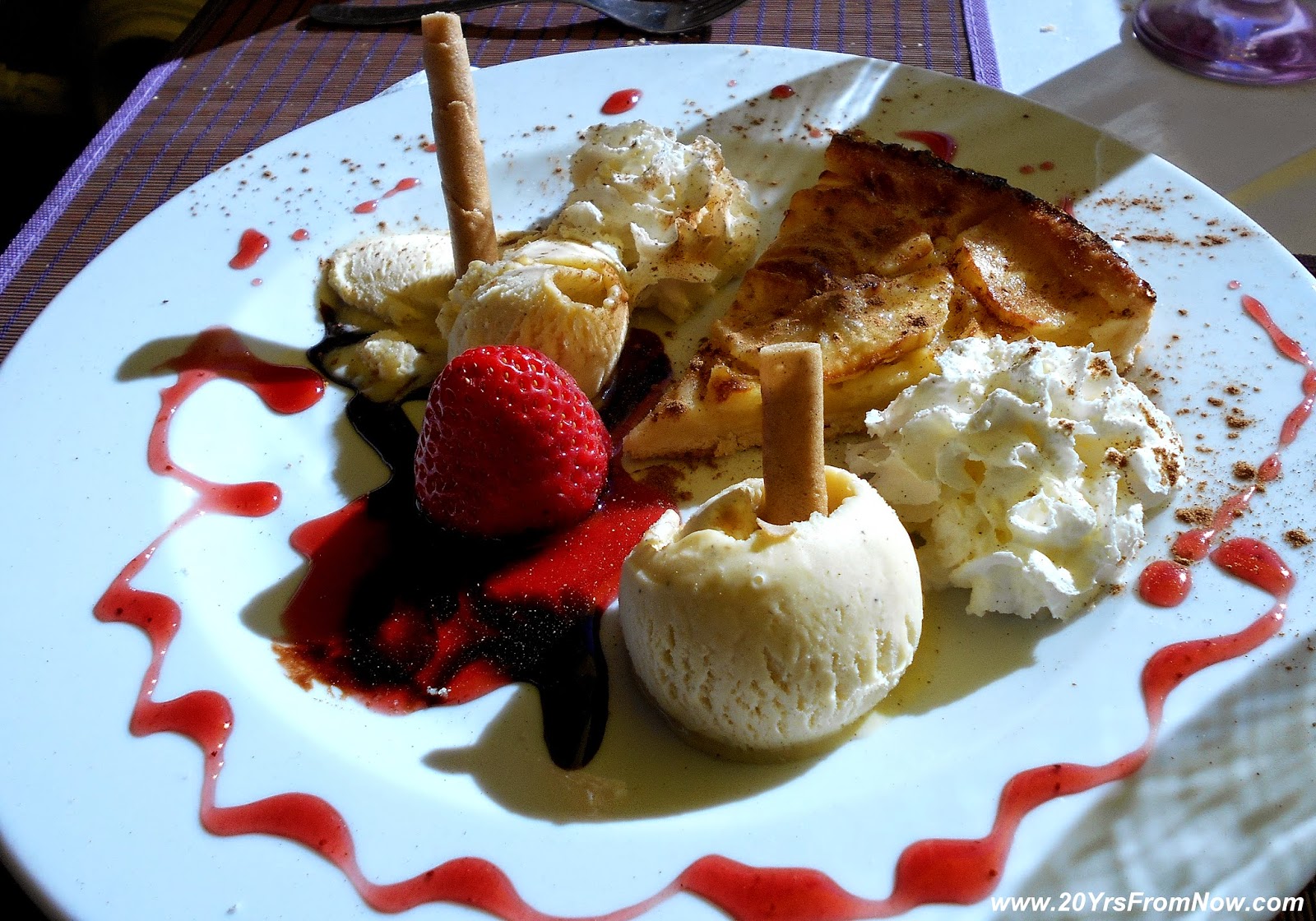 At times we were downright giddy at having discovered the Atrium. It's old world charm is evident in its architecture, elaborate stage, and intricate ceiling and chandelier. 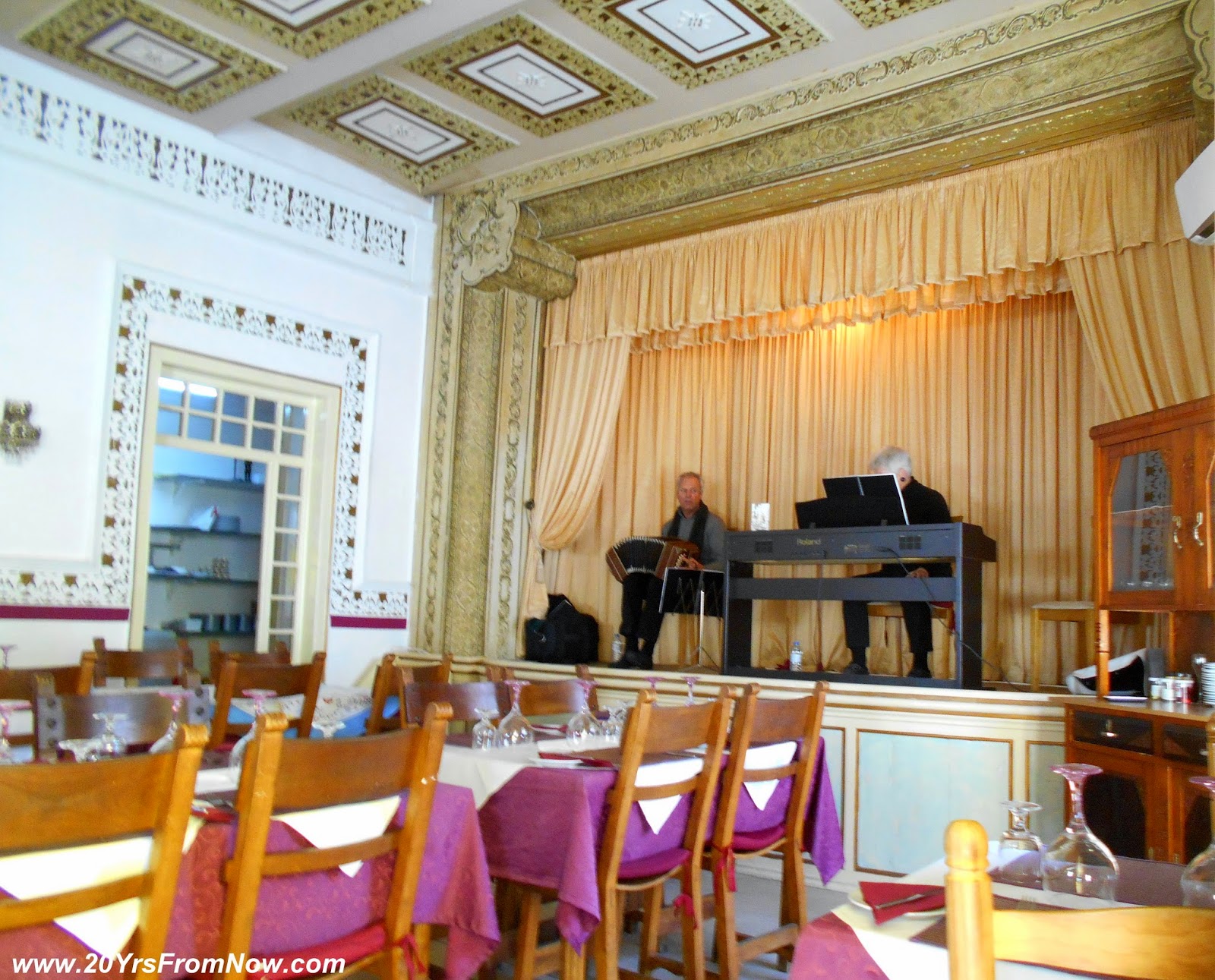 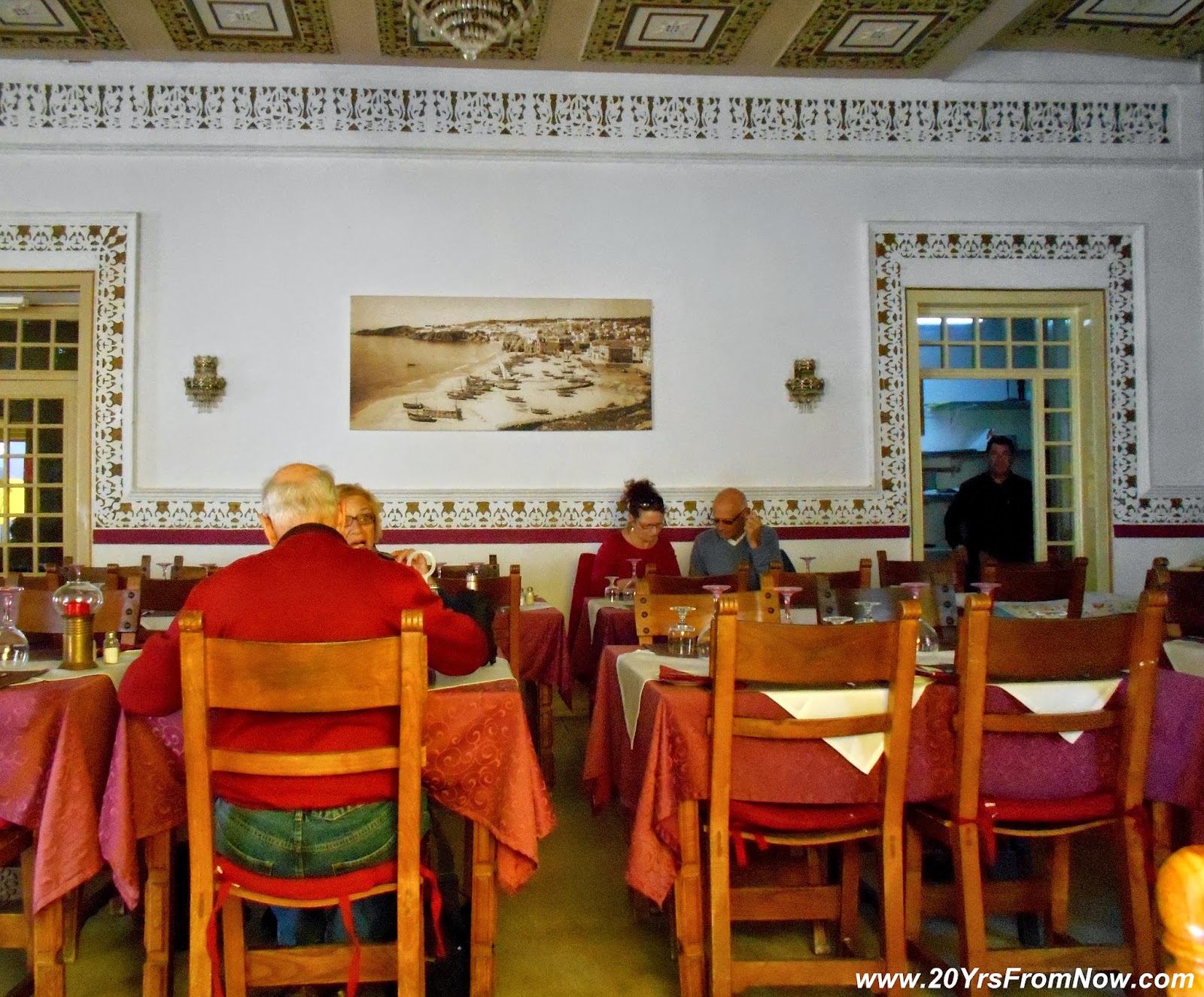 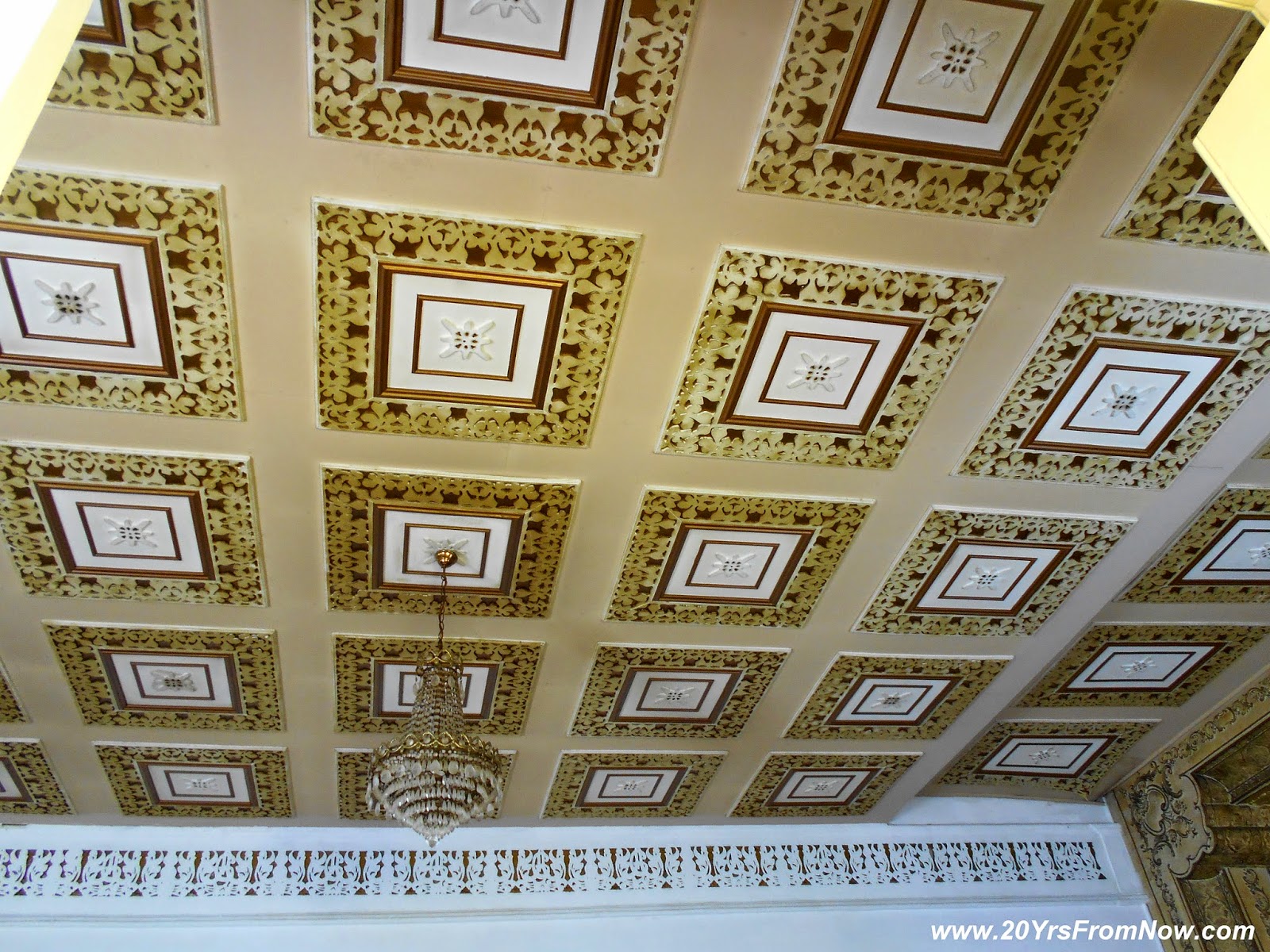 Talk about relaxed and enjoying the moment. I didn't even flinch when John pulled out his camera. 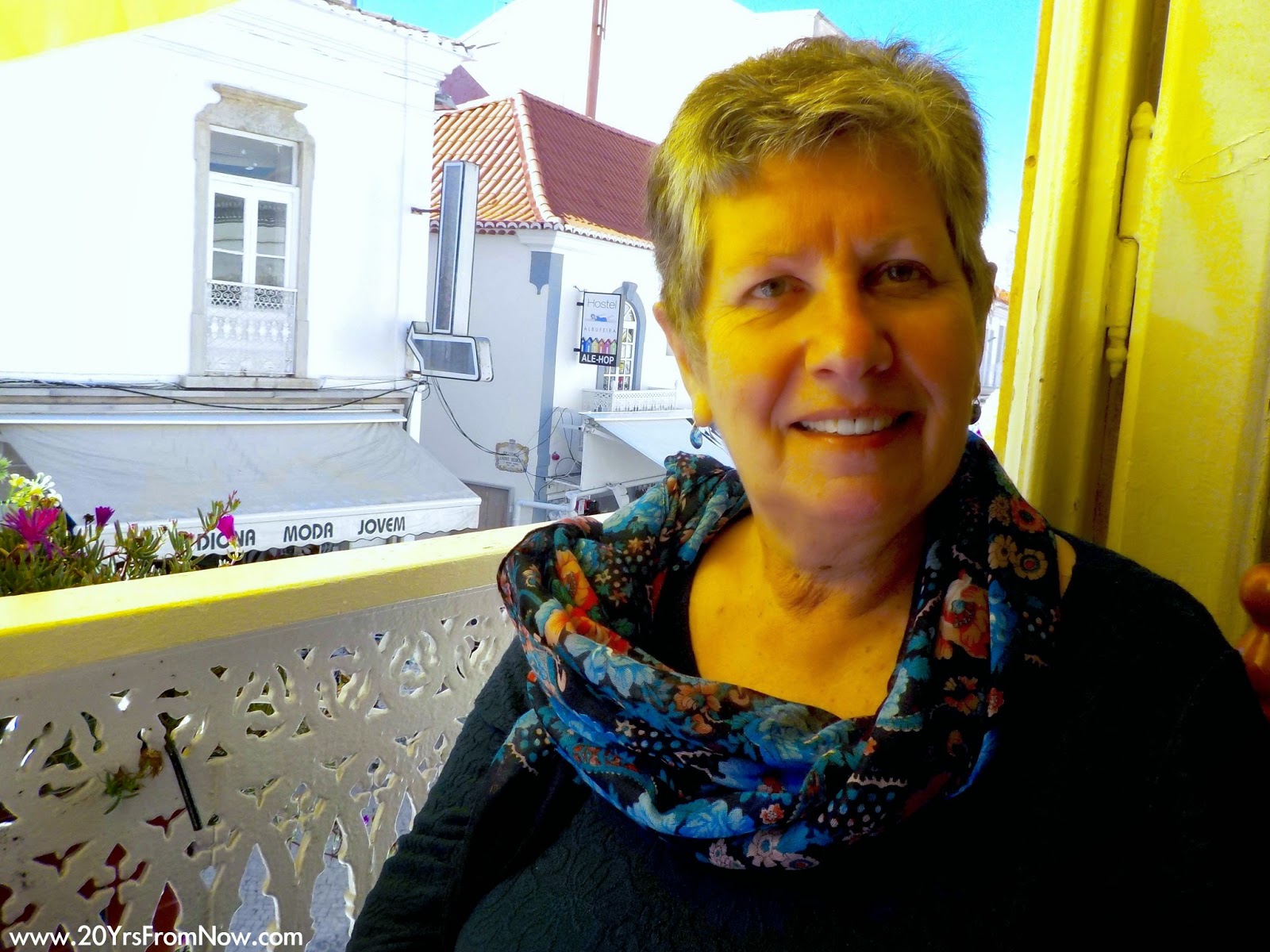 Another memorable lunch took place at The Beach Basket. The exterior of the building gives no clue as to the spectacular ocean views. 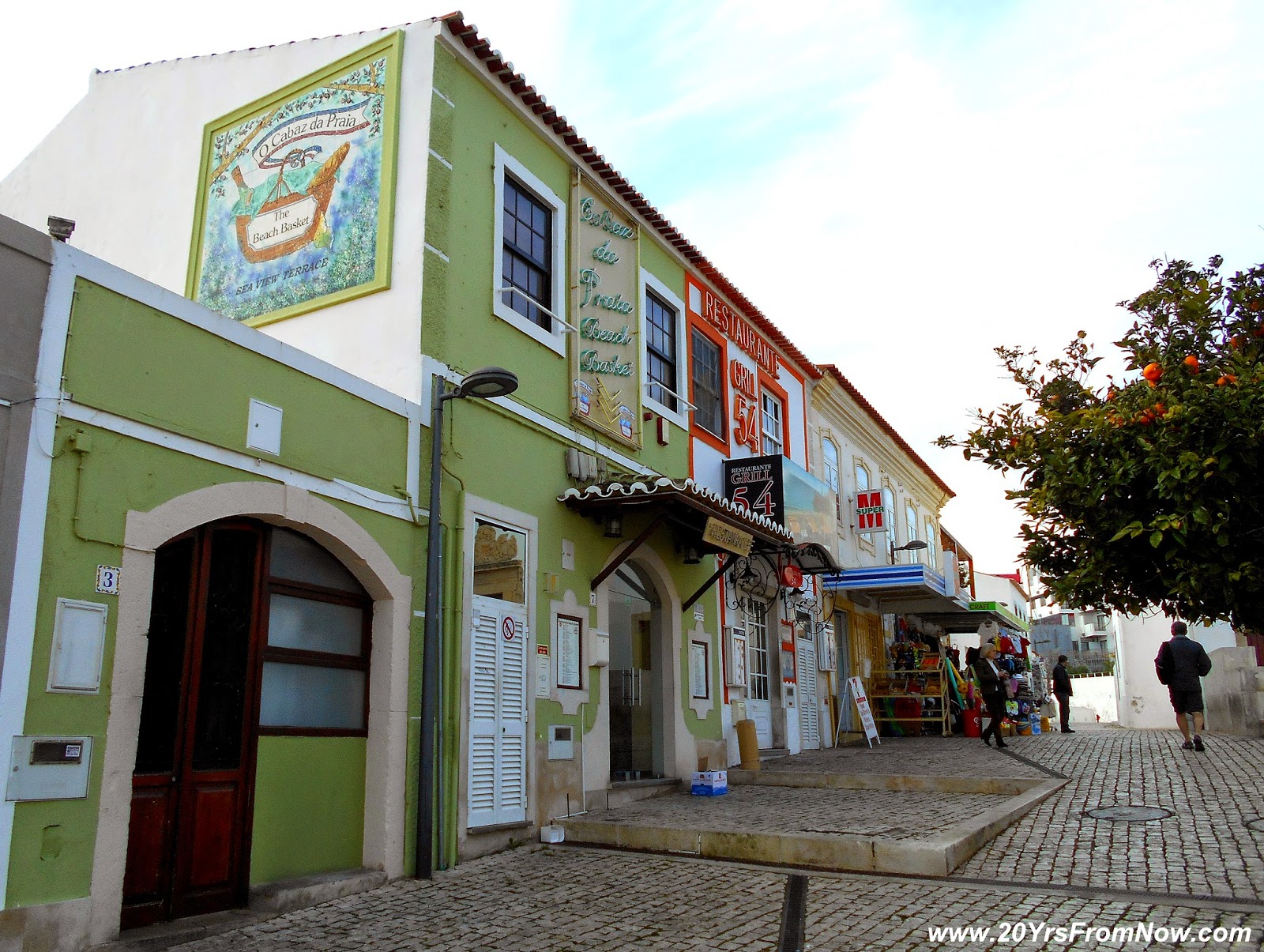 As you can see everyone bypassed the inside tables and headed toward the terrace. 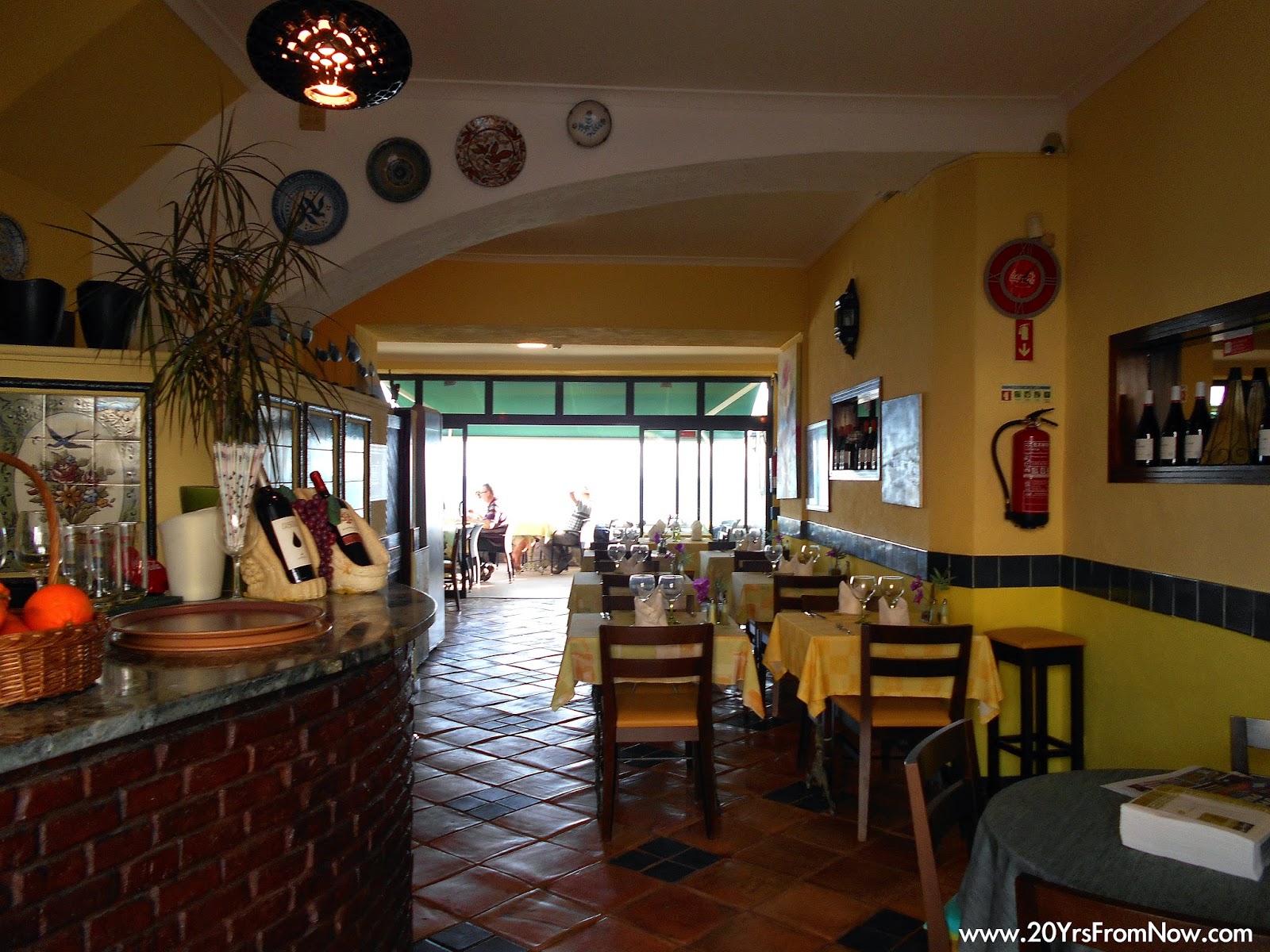 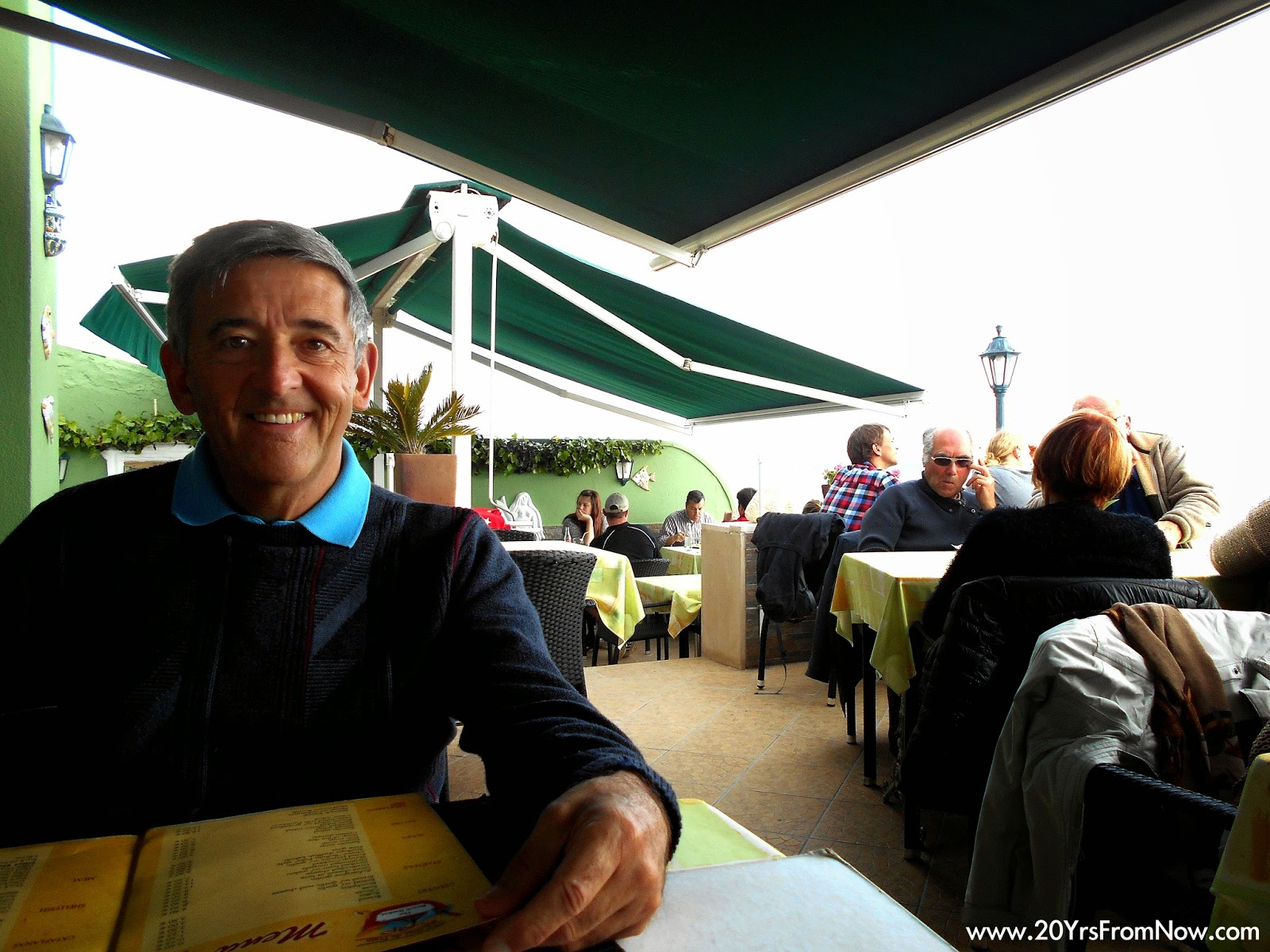 John ordered the grilled sea bass while I selected penne with salmon. My meal was delicious, but I did manage to get one bite of John's bass. I give him credit for sharing because it's the best fish I've ever tasted. So good in fact, it's a temptation for the gulls who do their best to convince customers they're part of the ambiance. 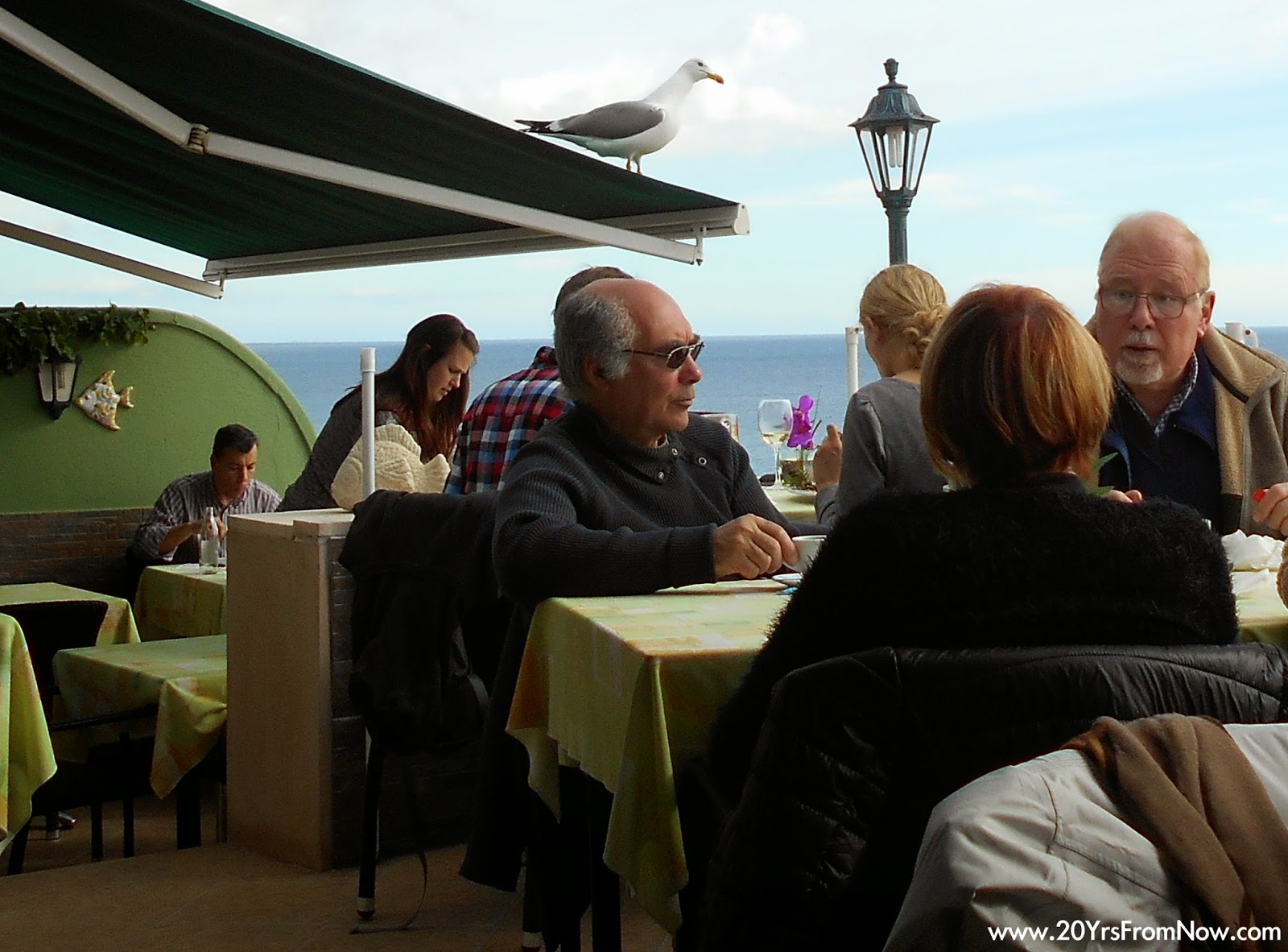 Sometimes they're a little more brazen. This one calmly joined a couple beside us, getting as close to the table as it dared. The waitress warned them to be careful. Given a chance the gull would snatch the fish right off their plate. I wonder if that's why he's got his eye on us. Did he spot John's sea bass? 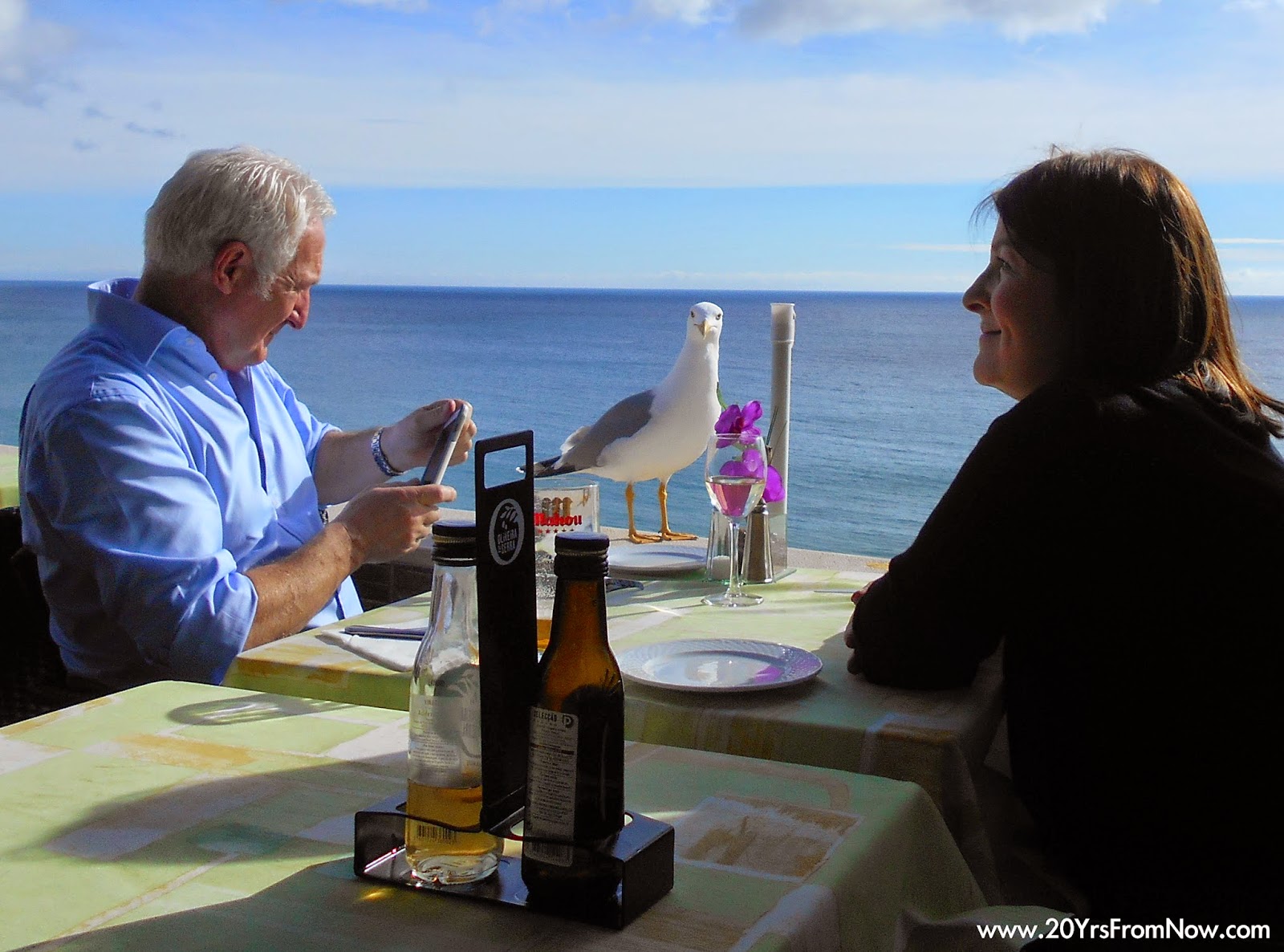 We've been told there are thousands of restaurants in Albufeira and to be honest we're grateful only half are open this time of year. Otherwise our bank account would be thinner while our waists would  definitely be thicker. The memories, however, truly are priceless!