Jasper isn't the first dog we've taken care of who's had obedience training, but he is the first to use hand signals in combination with verbal commands. The hand signals add to his understanding of what it is we want of him, but because they're new to us we're the old dogs learning new tricks!

Our first morning with Jasper we gave the routine a go. He did exactly as John requested, but we could tell from the look on his face we'd messed it up. Body language is body language regardless of species! A quick email to his owners and a request for the routine details in depth helped US far more than Jasper. We were especially impressed with the photos taken at Heathrow Airport and I've used them in this post to illustrate the routine. I'm not going to include the entire routine, but here are a few of the basic steps.

CLOSE: The starting position for all of the steps or tricks is for Jasper to be "close" to John's left leg.   Jasper's focus (as you can see above) is fixed on John or more specifically the treat in his left hand. Jasper knows he'll get one for every trick he completes, so his level of concentration is impressive.

WAIT: Speaking the command as well as pointing at his nose, John instructs Jasper to "wait".  John moves a few years away from Jasper and then says "Jasper, close." Jasper closes the distance between them and stays by John's side as they walk into the living room where John stops and repeats "Jasper, close". When he is beside John's left leg he gets a treat.

STAND: Palm horizontal to the floor and say "stand". 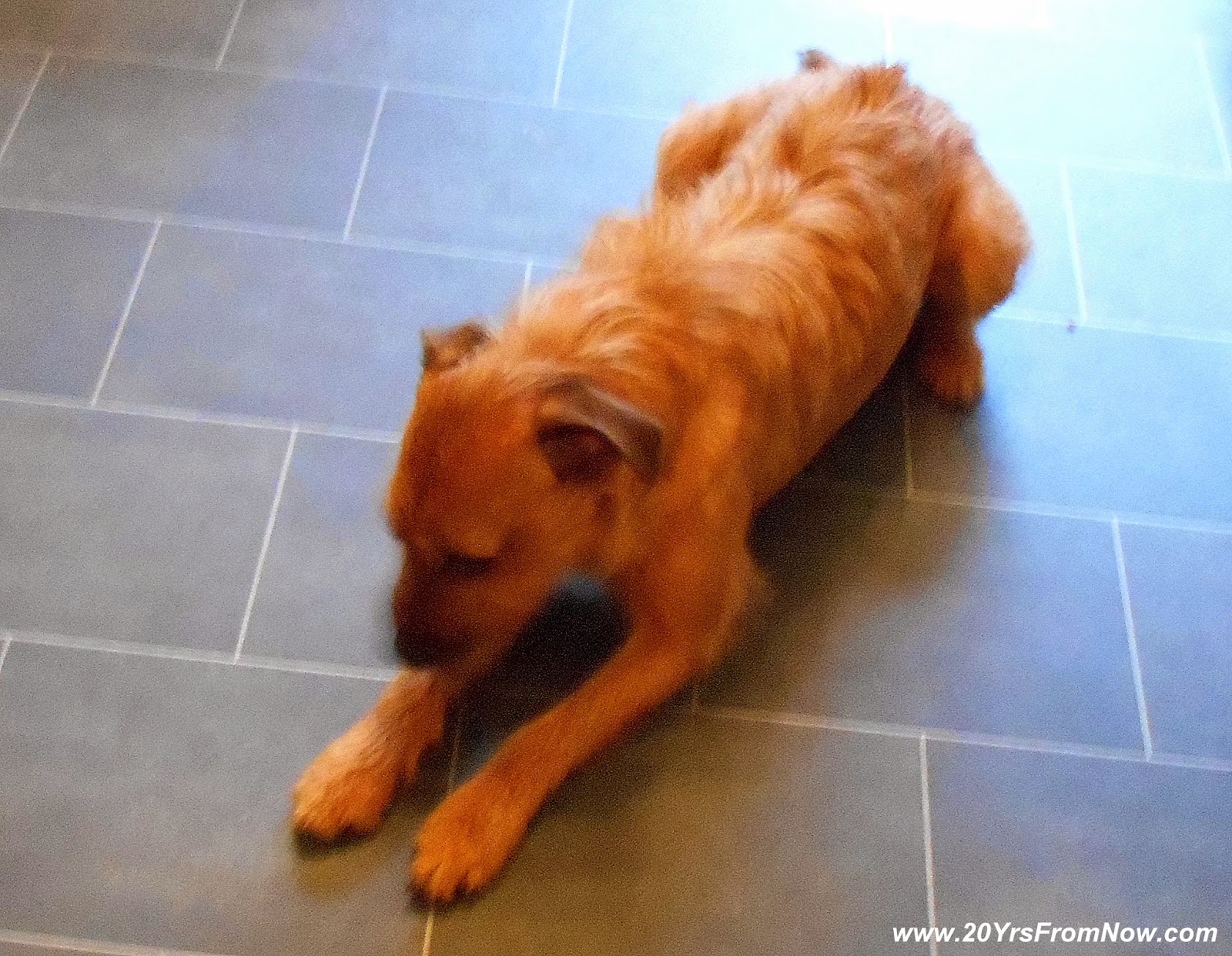 ROLL OVER: Once he's in the bow position the next trick is for him to roll over. The hand signal for this is to point one's fingers at Jasper while rotating the hand clockwise and commanding him to "roll over".

FETCH: A dumbbell is also used in the routine. While Jasper is in close position John tosses the dumbbell across the room. He orders Jasper to "wait" and then "fetch" it. Once he returns with the dumbbell in his mouth he's asked to "hold it" for a few seconds.

The routine, verbal commands and hand signals make for one well behaved dog and that makes life easy for us when he's at the park and off leash. In place of a treat, his prize is playtime with the ball.


At any given time there are at least five to a dozen other dogs in the park. Jasper enjoys saying hello (sniff, sniff), but chasing the ball remains his supreme objective. If you look carefully there are four dogs in the photo below. Can you spot Jasper? 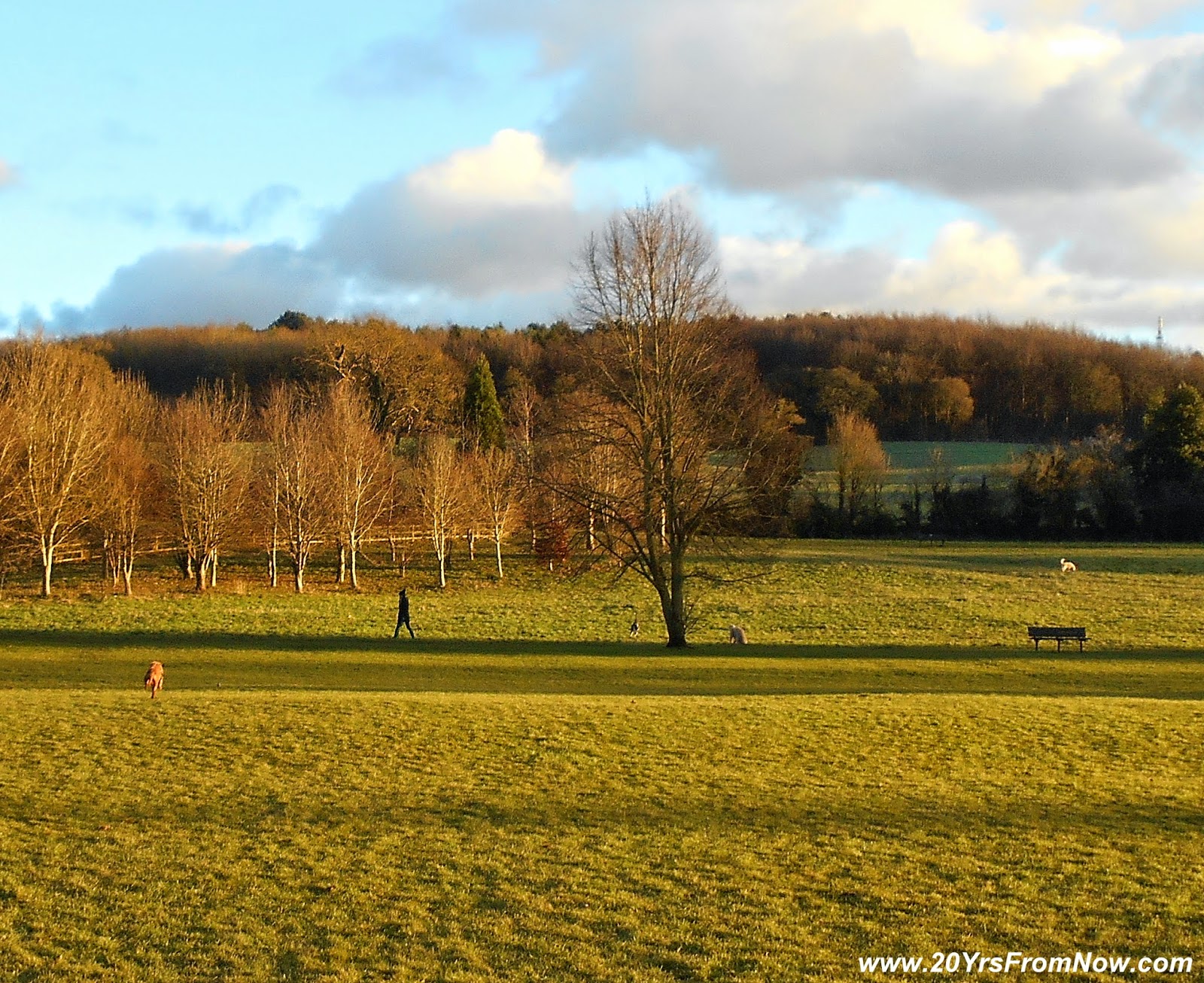 Canines may enjoy doing tricks for treats, but cats have other ideas. Mew would rather sit on the step in the backyard, and he's far from impressed when I joined him to snap his photo. It's not that he doesn't enjoy our company, he does, but he prefers to dictate when and where!

Purr, meanwhile, prefers to groom herself on the staircase, and like Mew she would rather I had been somewhere else. 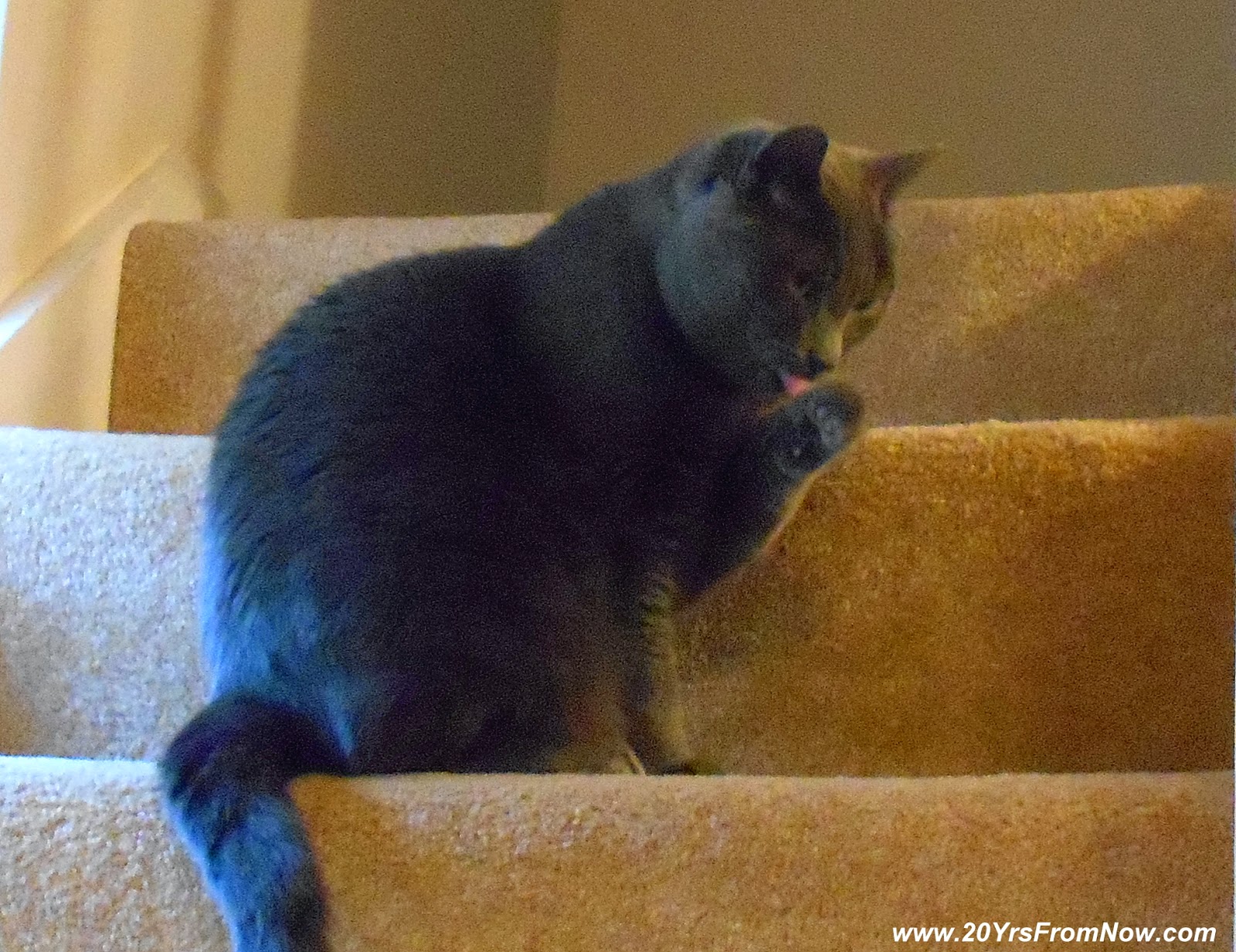 John and I? We're still practicing and perfecting those hand signals. The good news is we figure we should have them down pat by the time the homeowners return.  ;-)