Confession time...we'd never heard of Jacou prior to arranging our current house and parrot sit. We quickly did a Google search, however, and discovered it's a small town of approximately 5700 inhabitants within easy commuting distance to Montpellier. 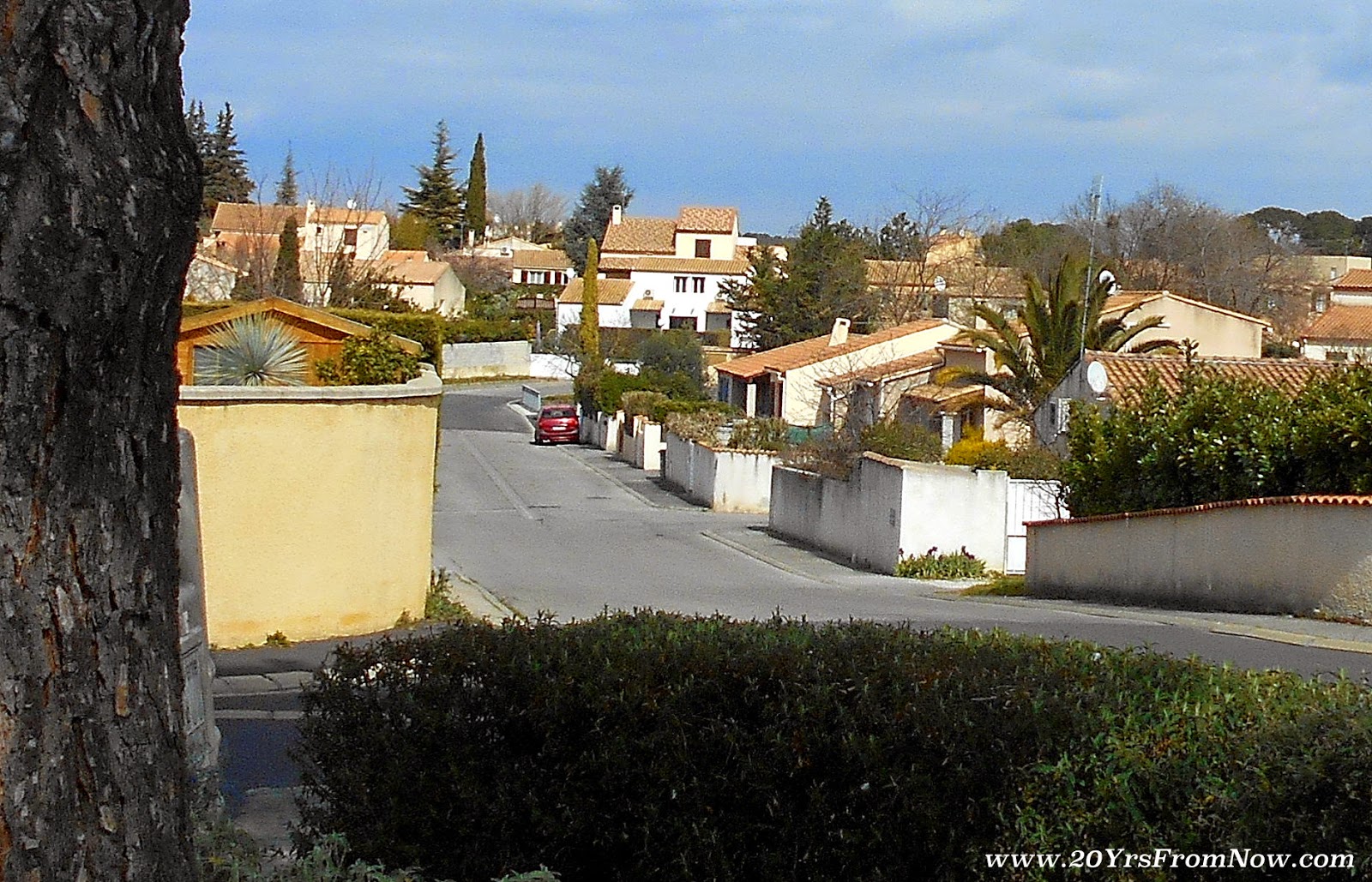 Our homeowners have lived here for the past two years (they're originally from the USA) and they gave us a quick tour before they left on holiday. Since then we've walked and wandered around town, getting a feel for the place. Our first observation is the definite southern Mediterranean charm with tile roofs, pastel stucco exteriors and palm trees. 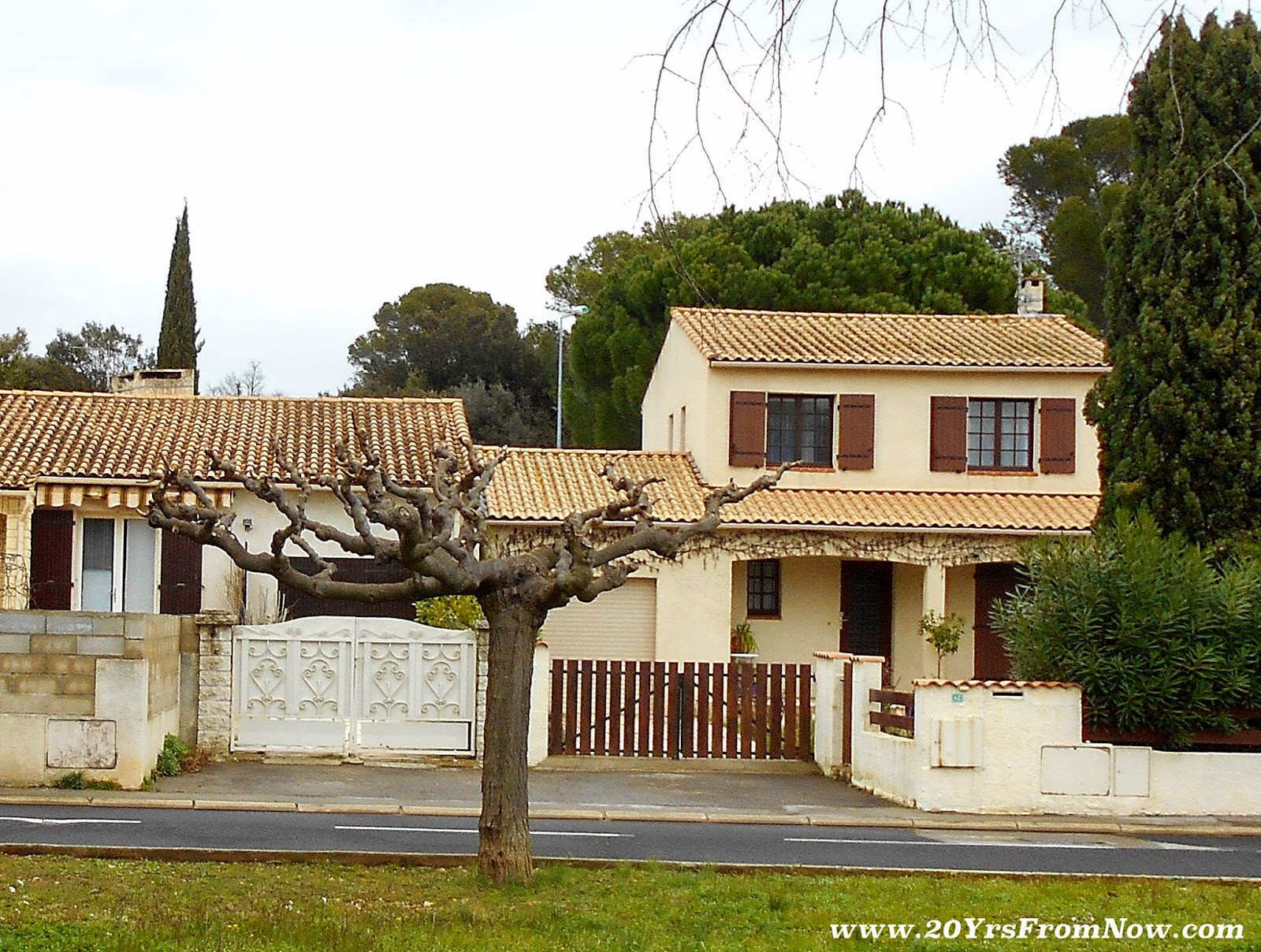 Plus, there are two (yes, two) vineyards across the street. Oh, look, that's a case of chardonnay at the end of the rainbow. :) 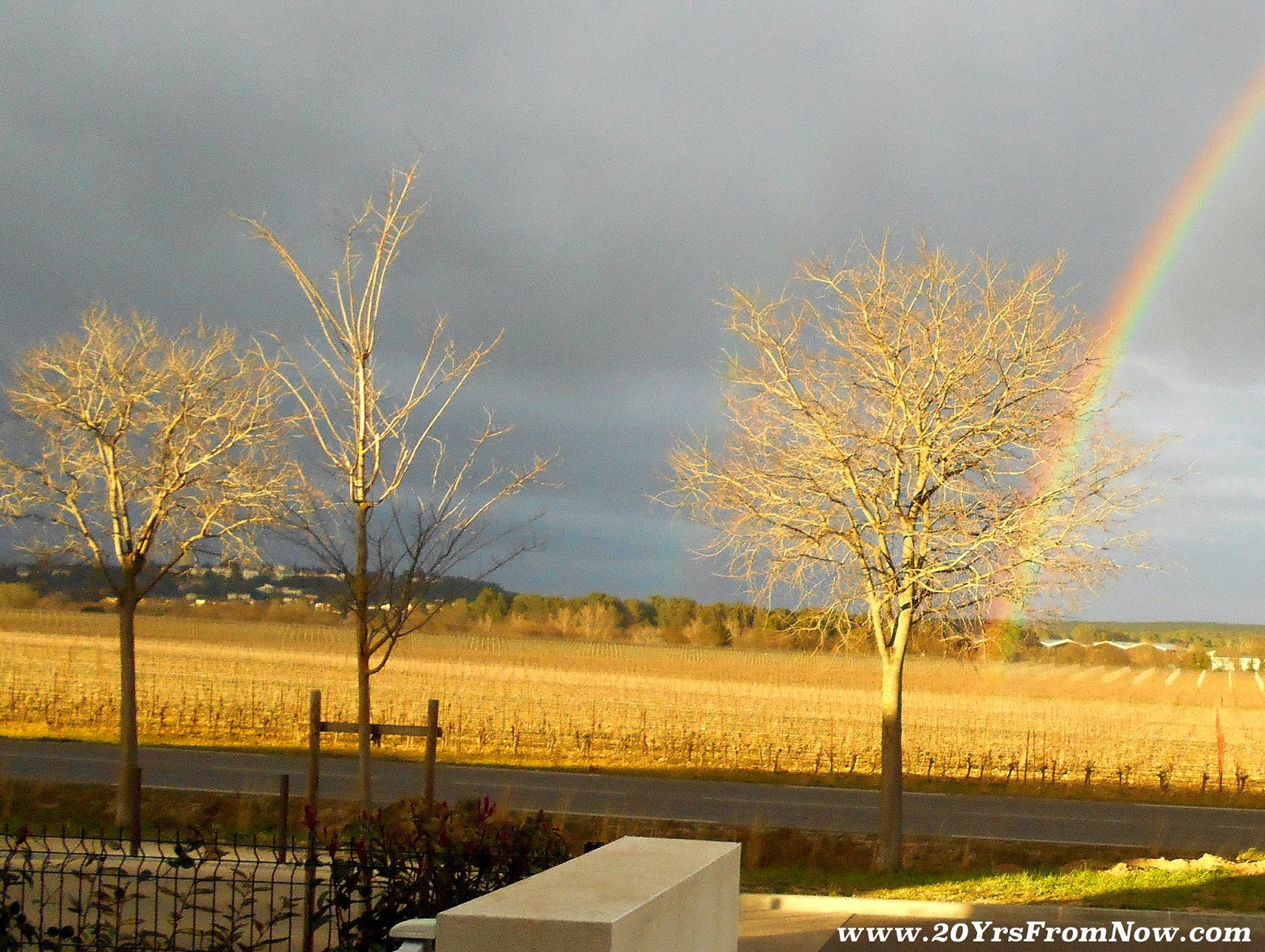 The second thing is most homes are surrounded by tall fences which is great for the homeowner's privacy but not so great for me wanting to invade their space and take a photograph. 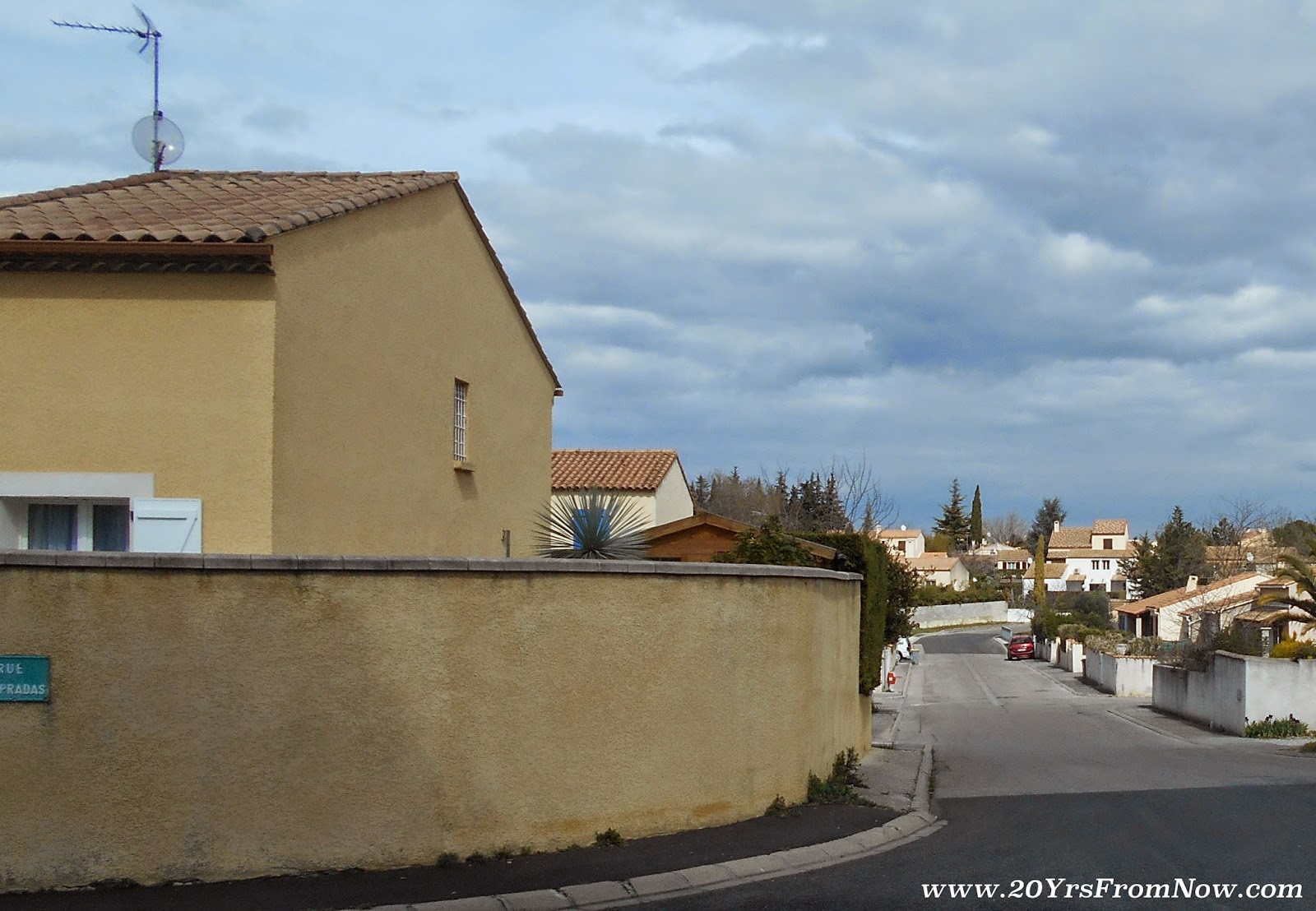 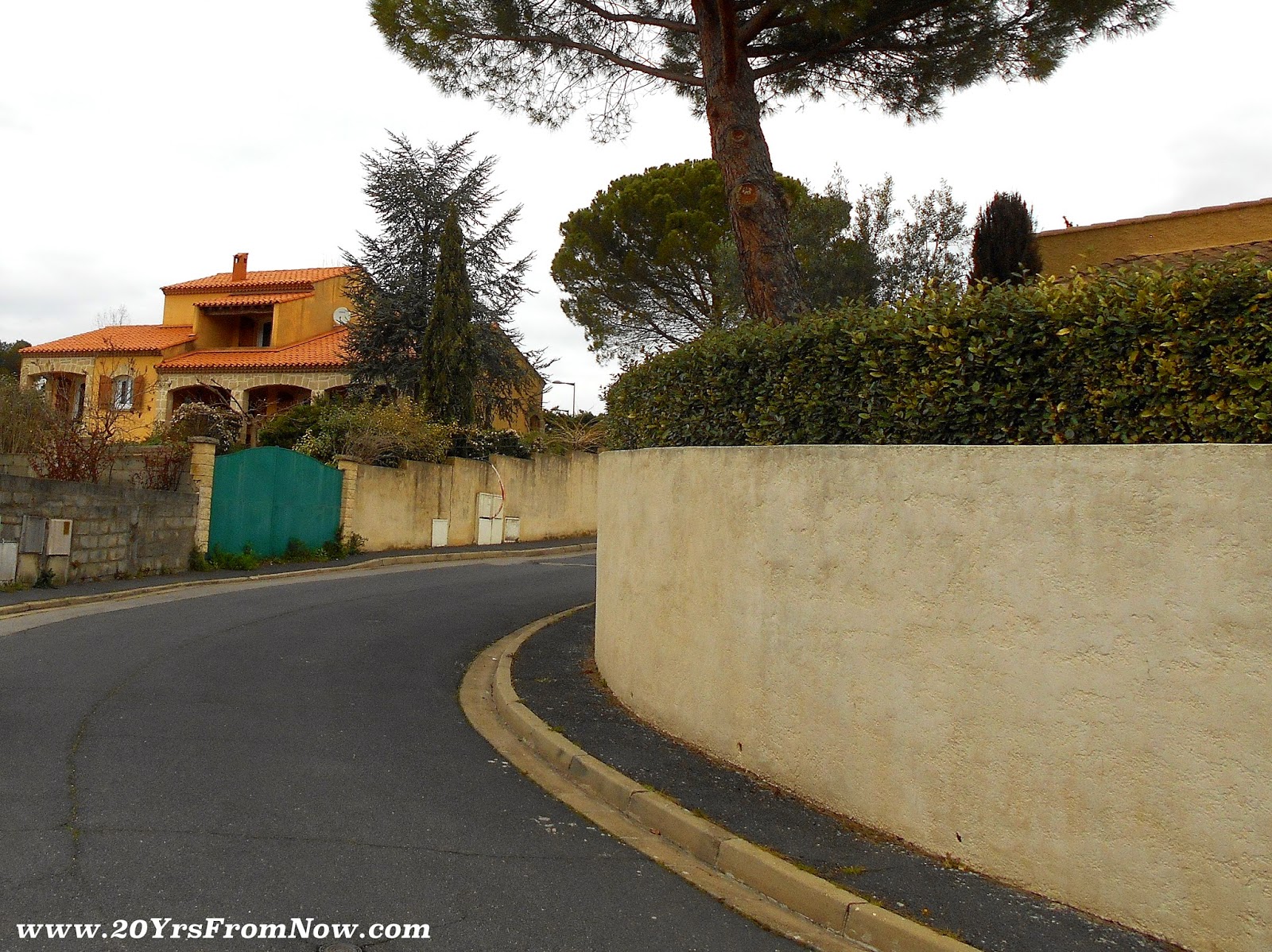 Still, I did my best. 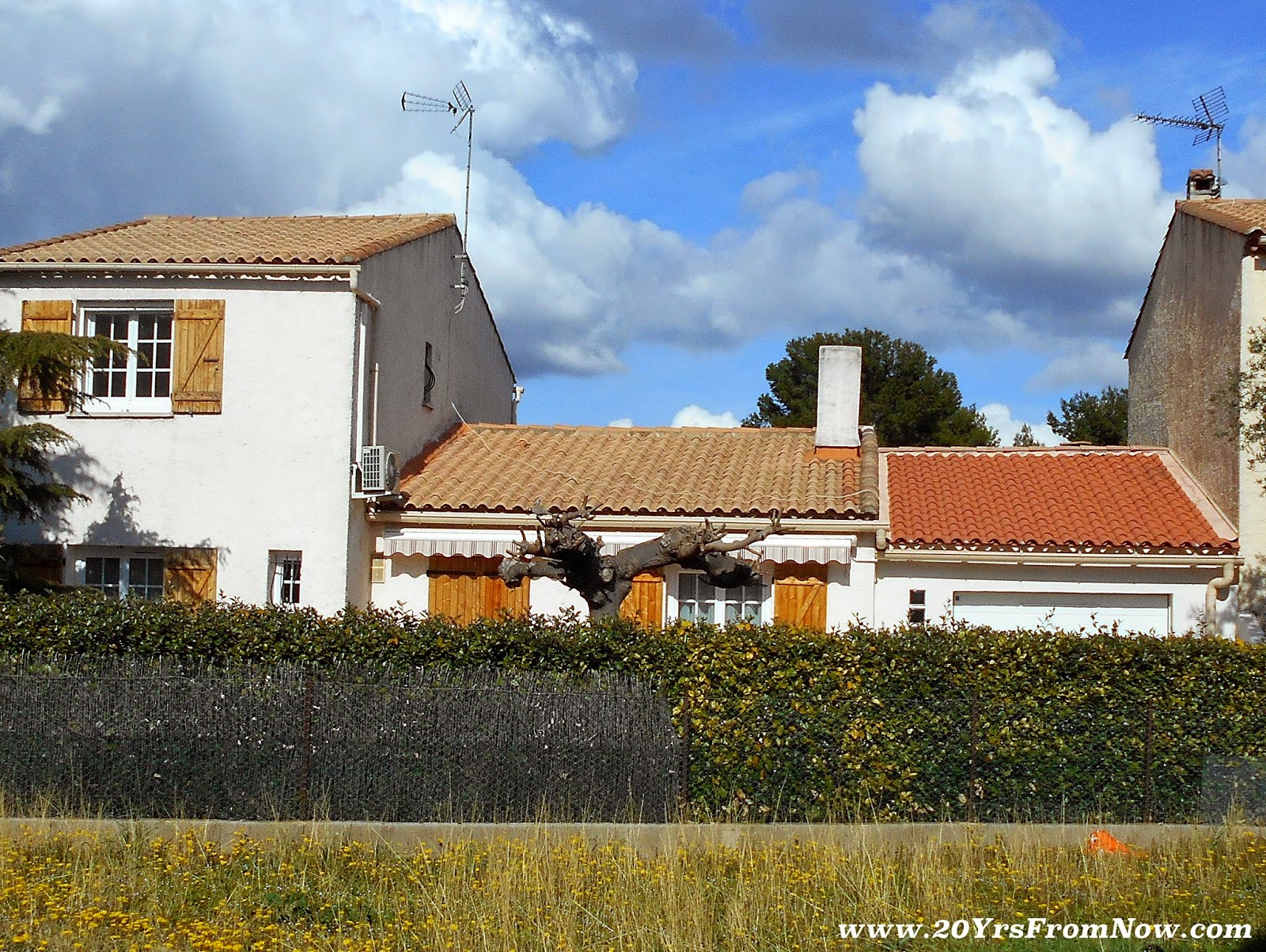 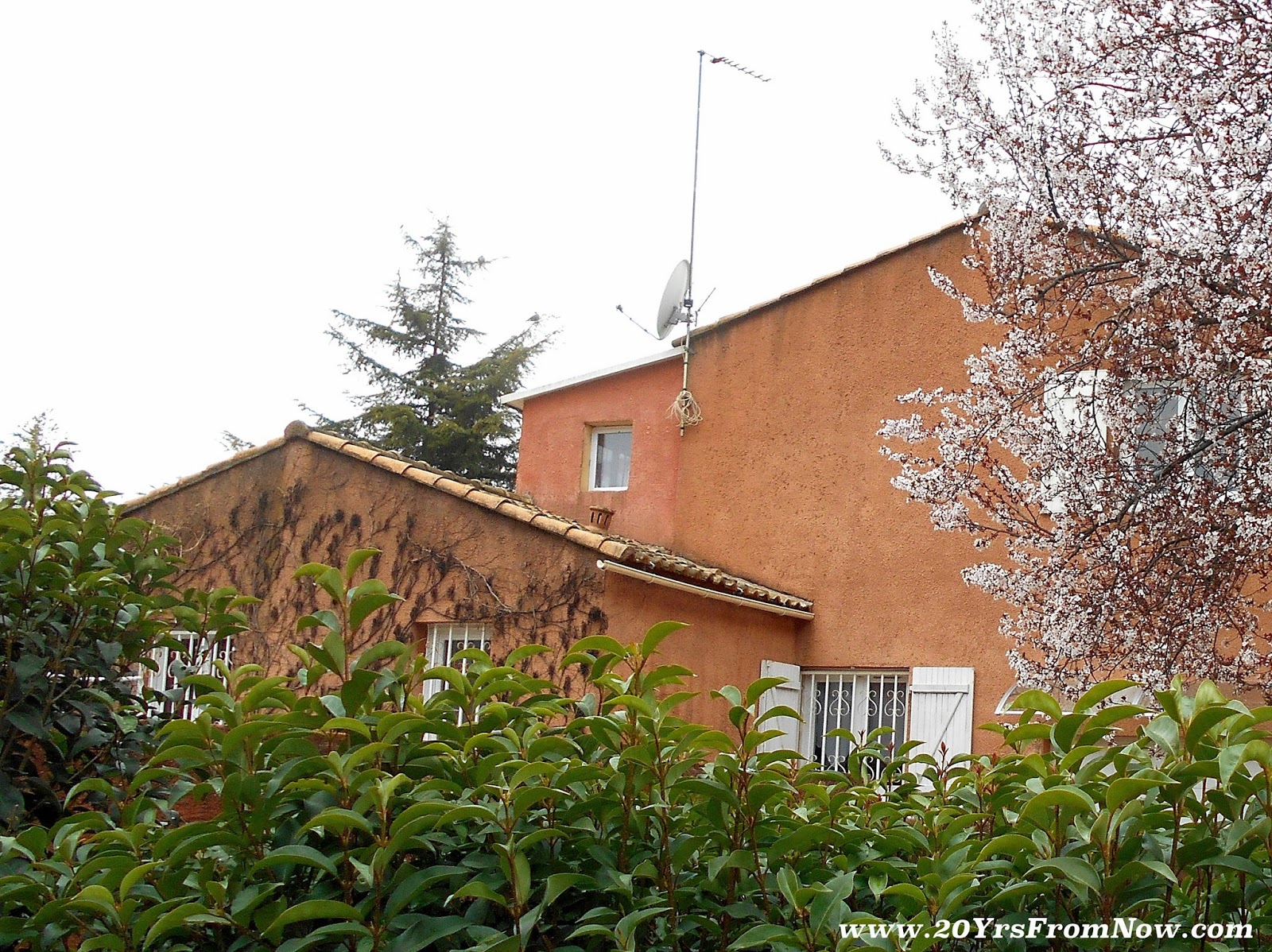 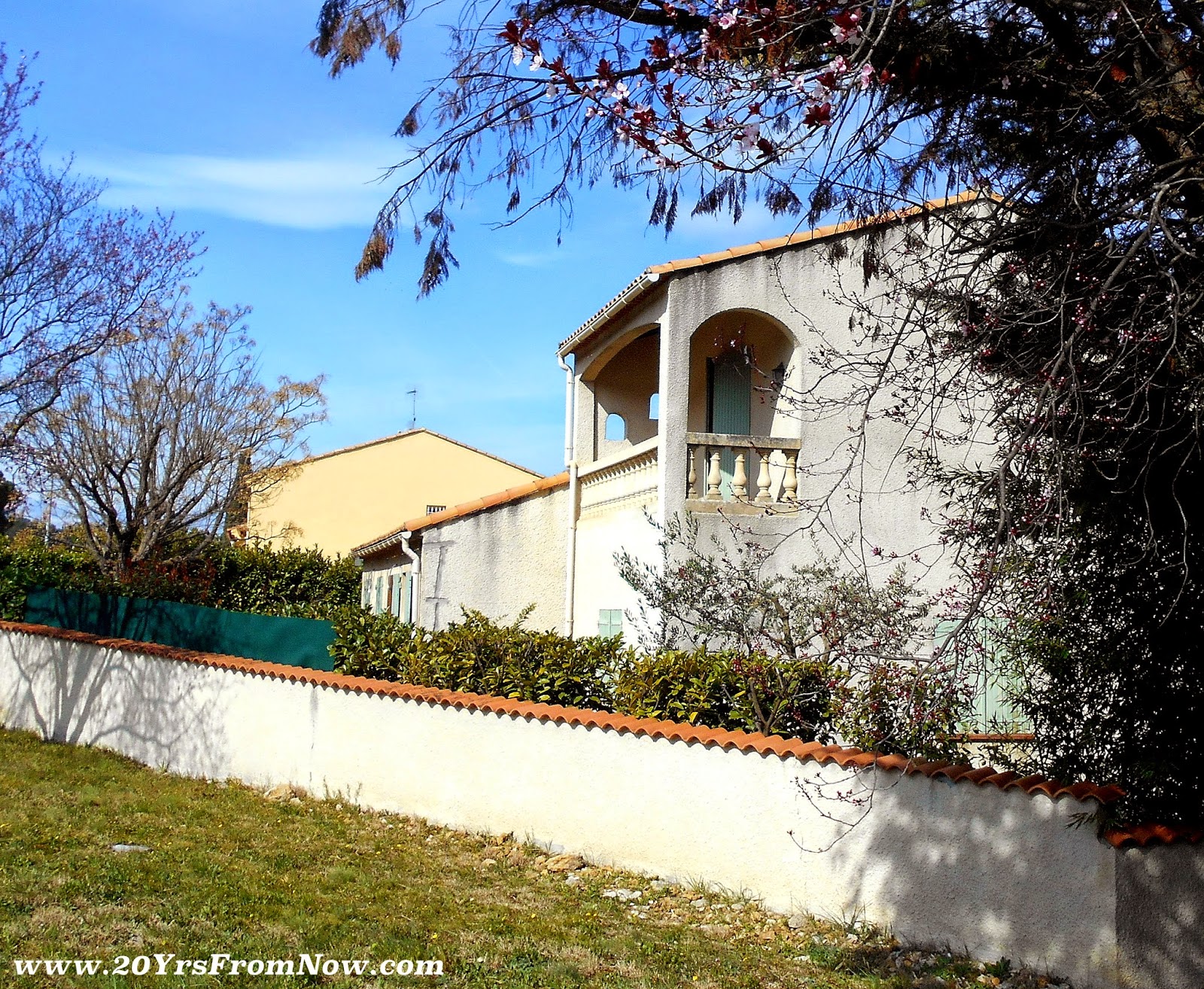 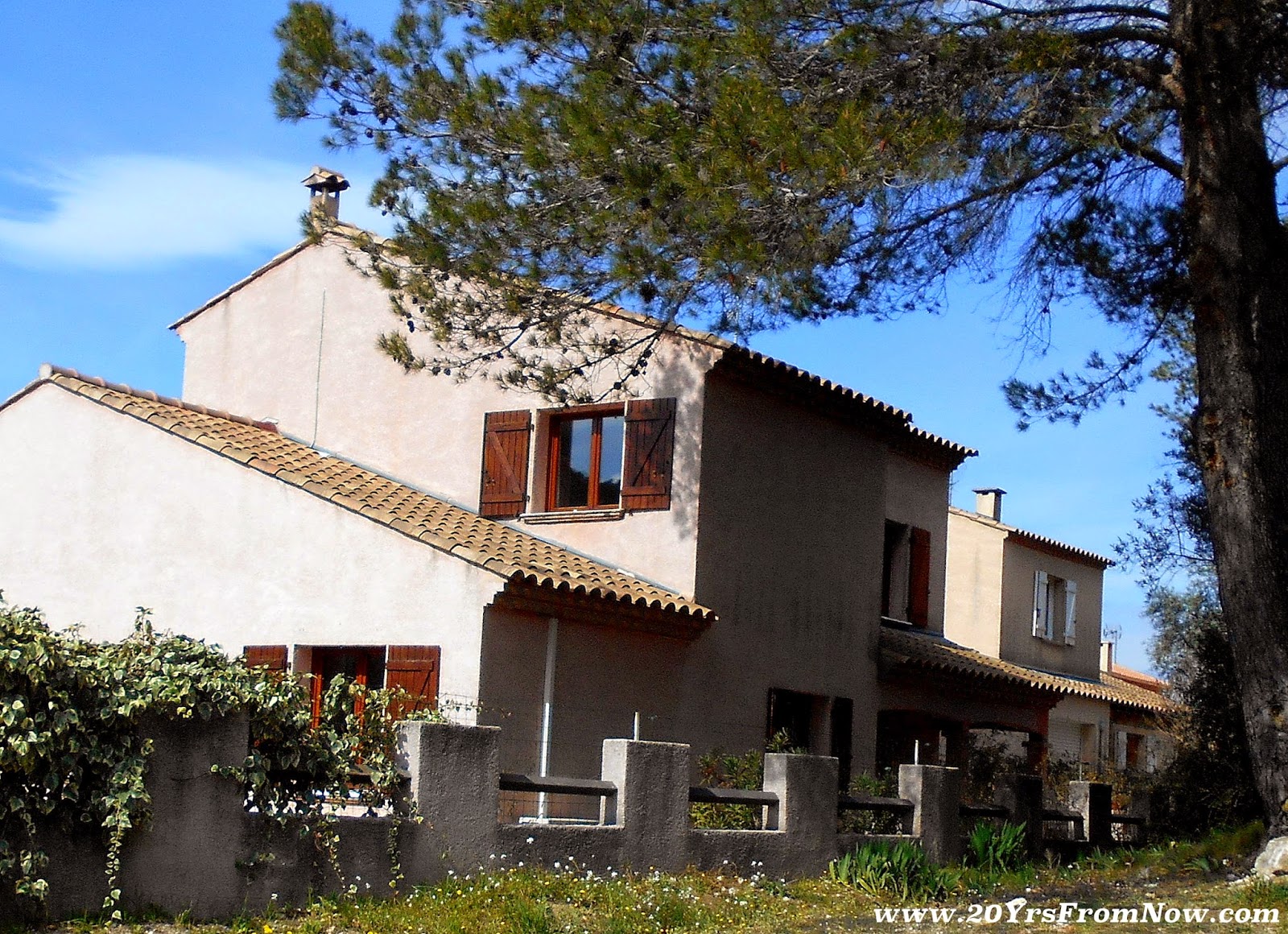 This next home is on a corner lot and unique in that it is not surrounded by a wall or fence.

Another Jacou feature we appreciate is the wide sidewalk and bike lanes. Sometimes they're one and the same, other times they're separate as in this case. The bike lane is on the opposite side of the street to John's left. 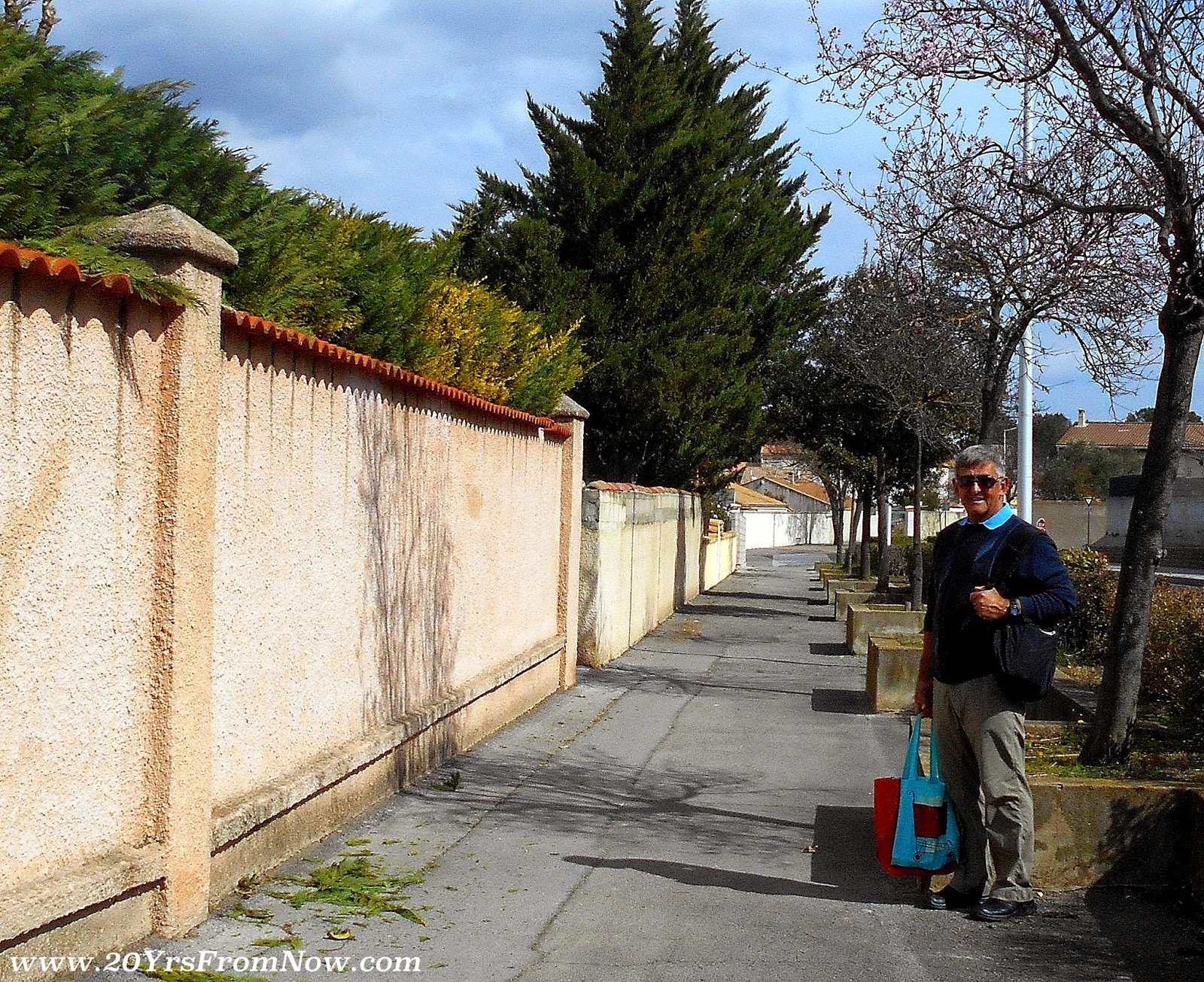 Jacou has many modern apartment buildings and new subdivisions of semi and detached homes. 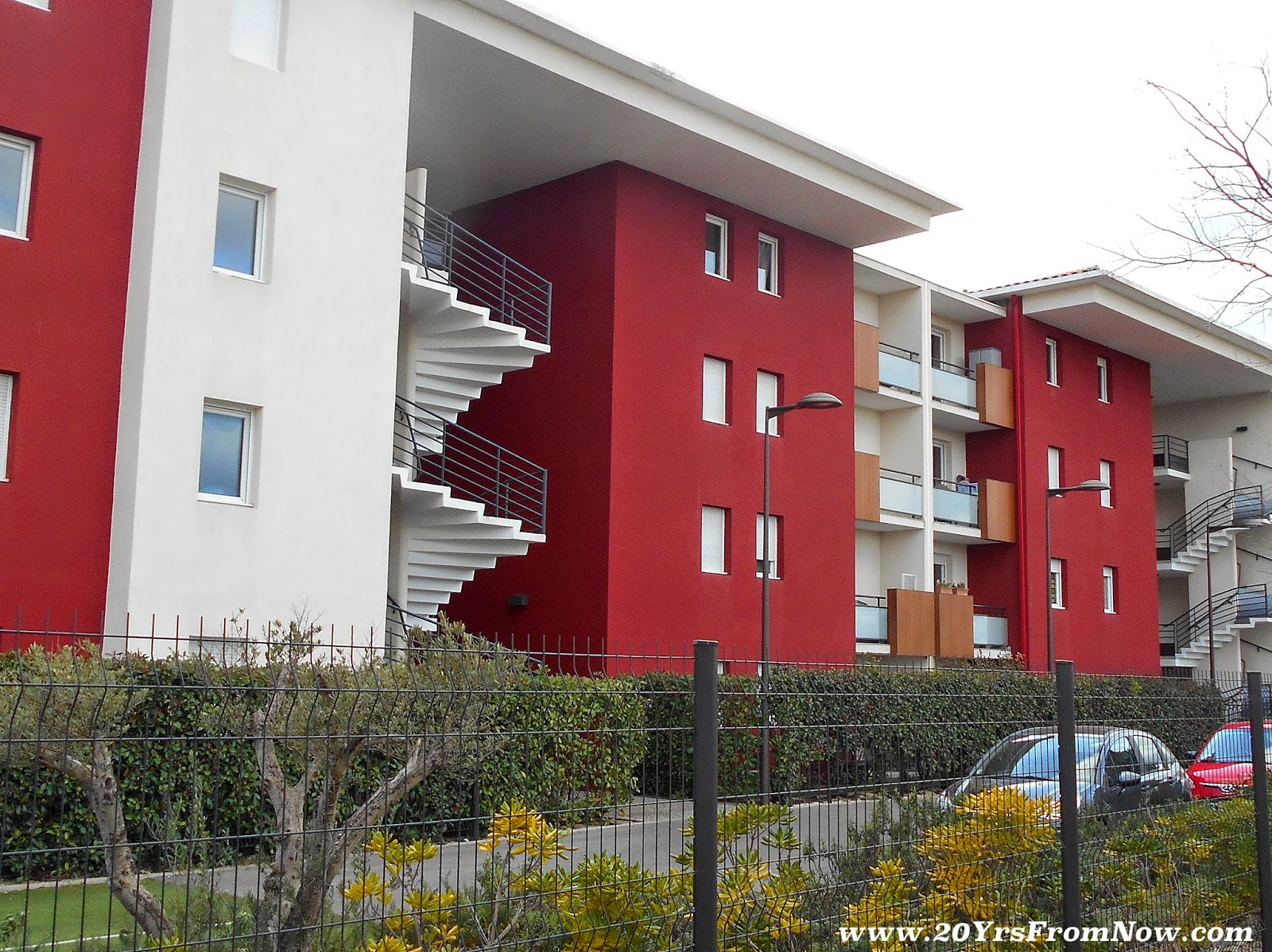 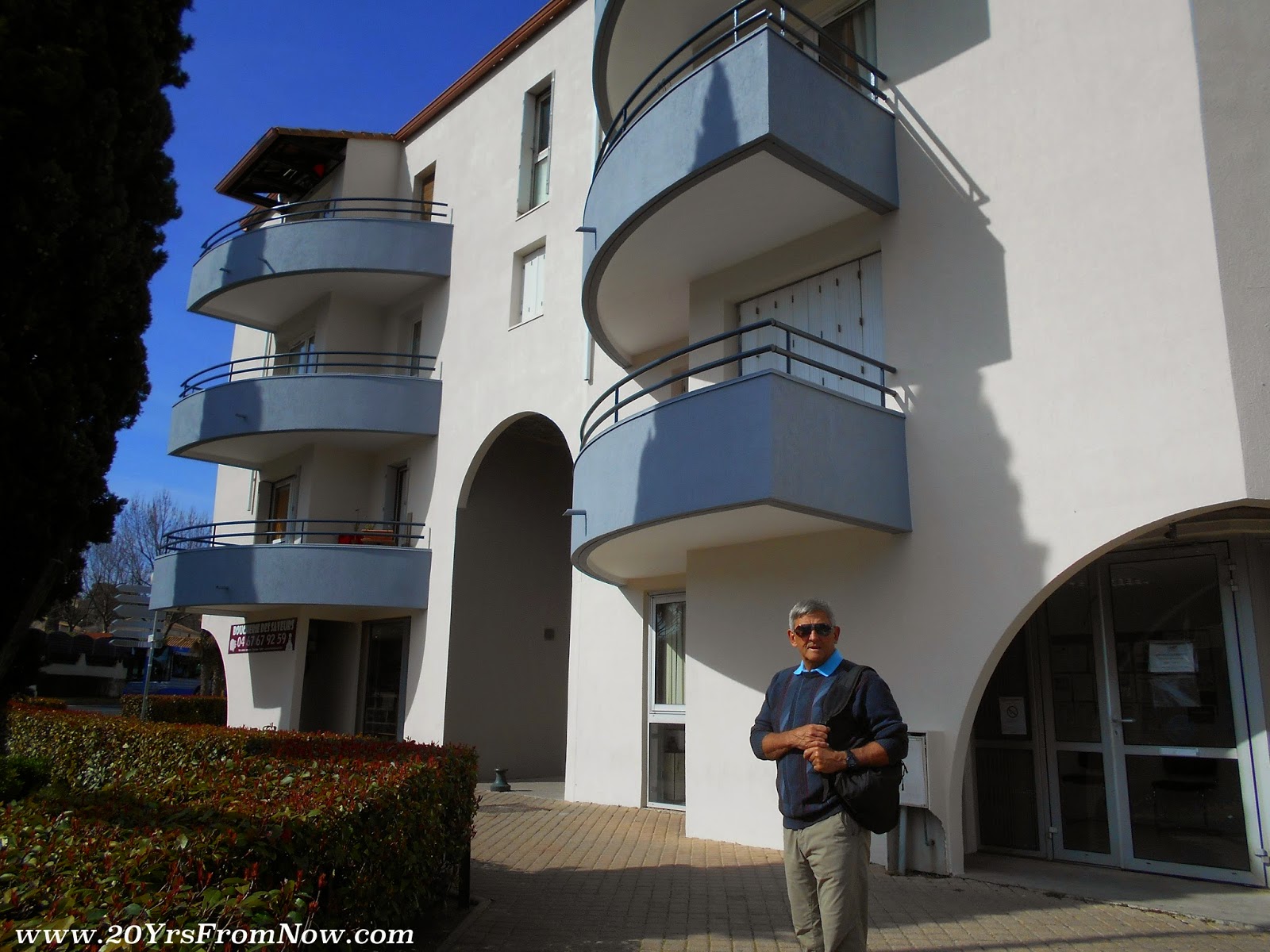 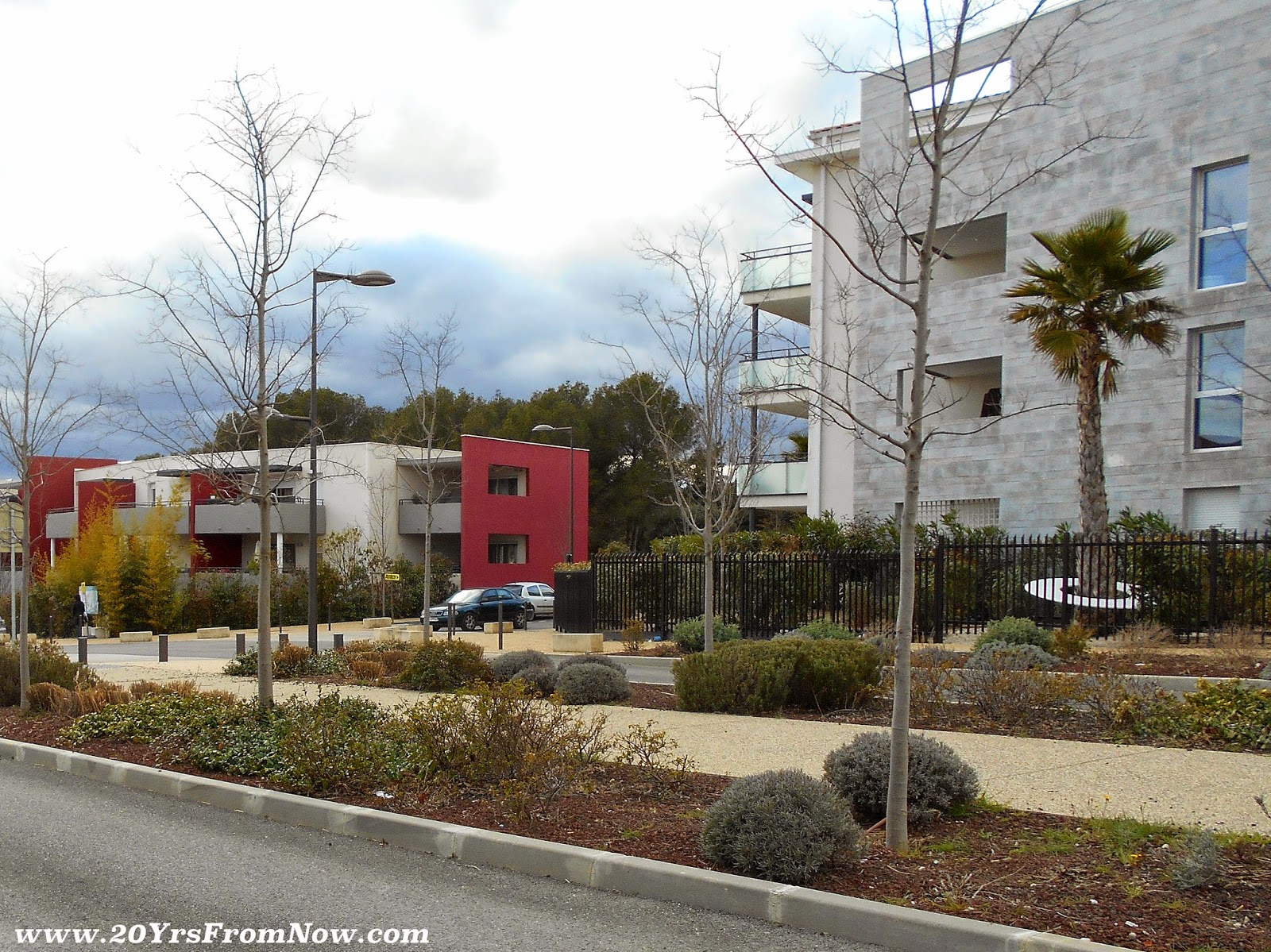 Closer to the centre, of course, the buildings are older and attest to Jacou's historic past, but they are still totally functional and inhabited by the locals. 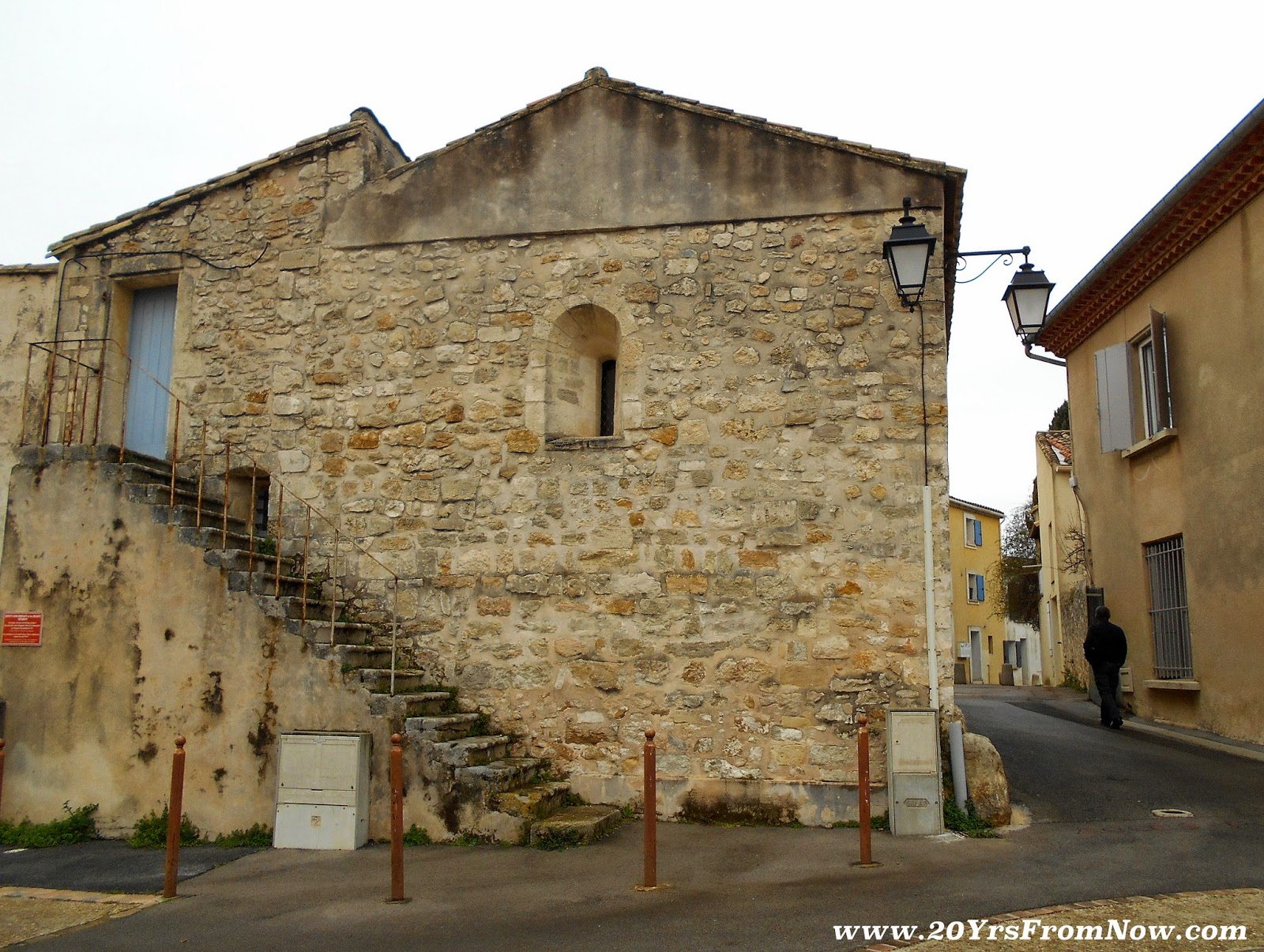 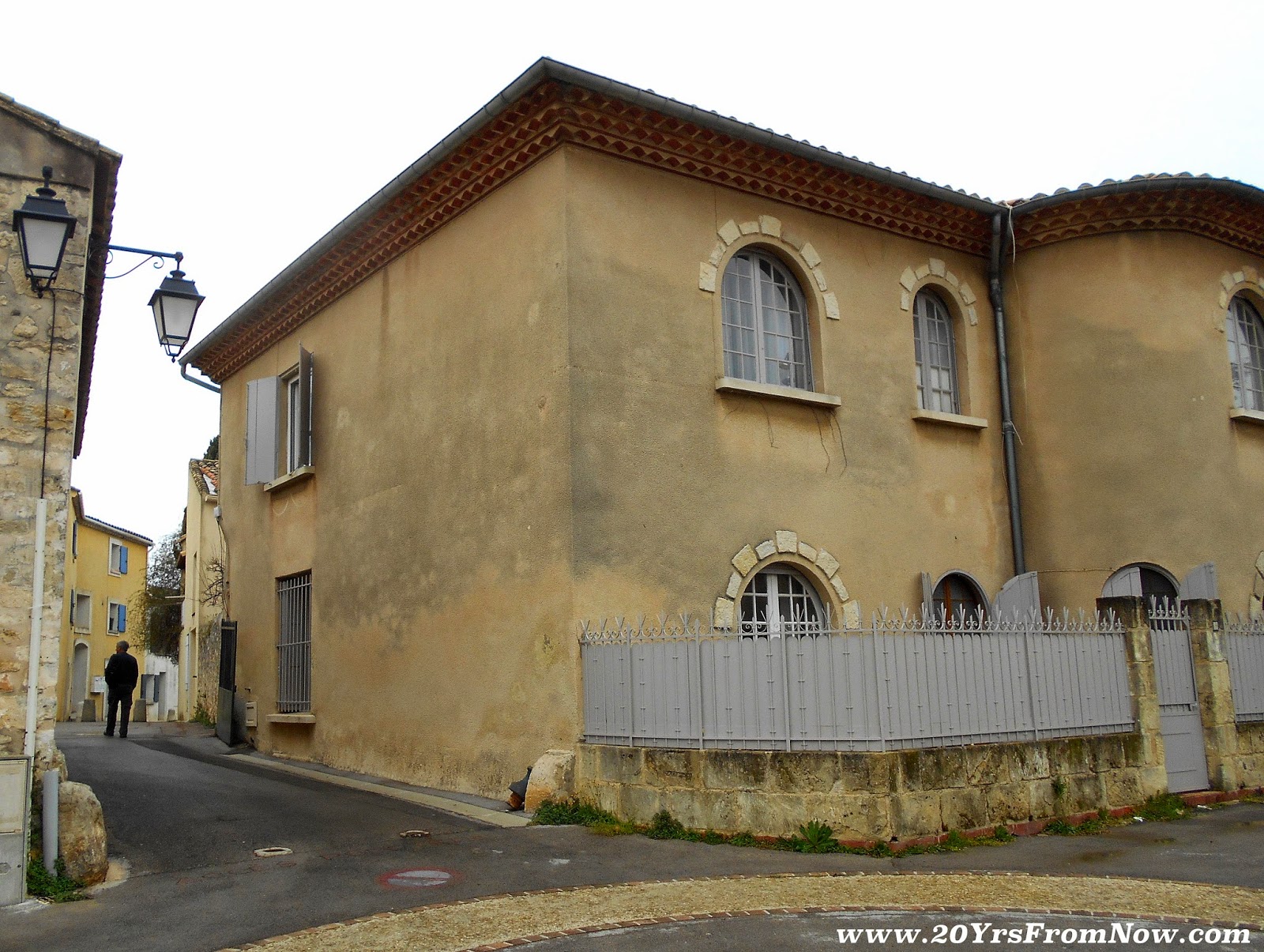 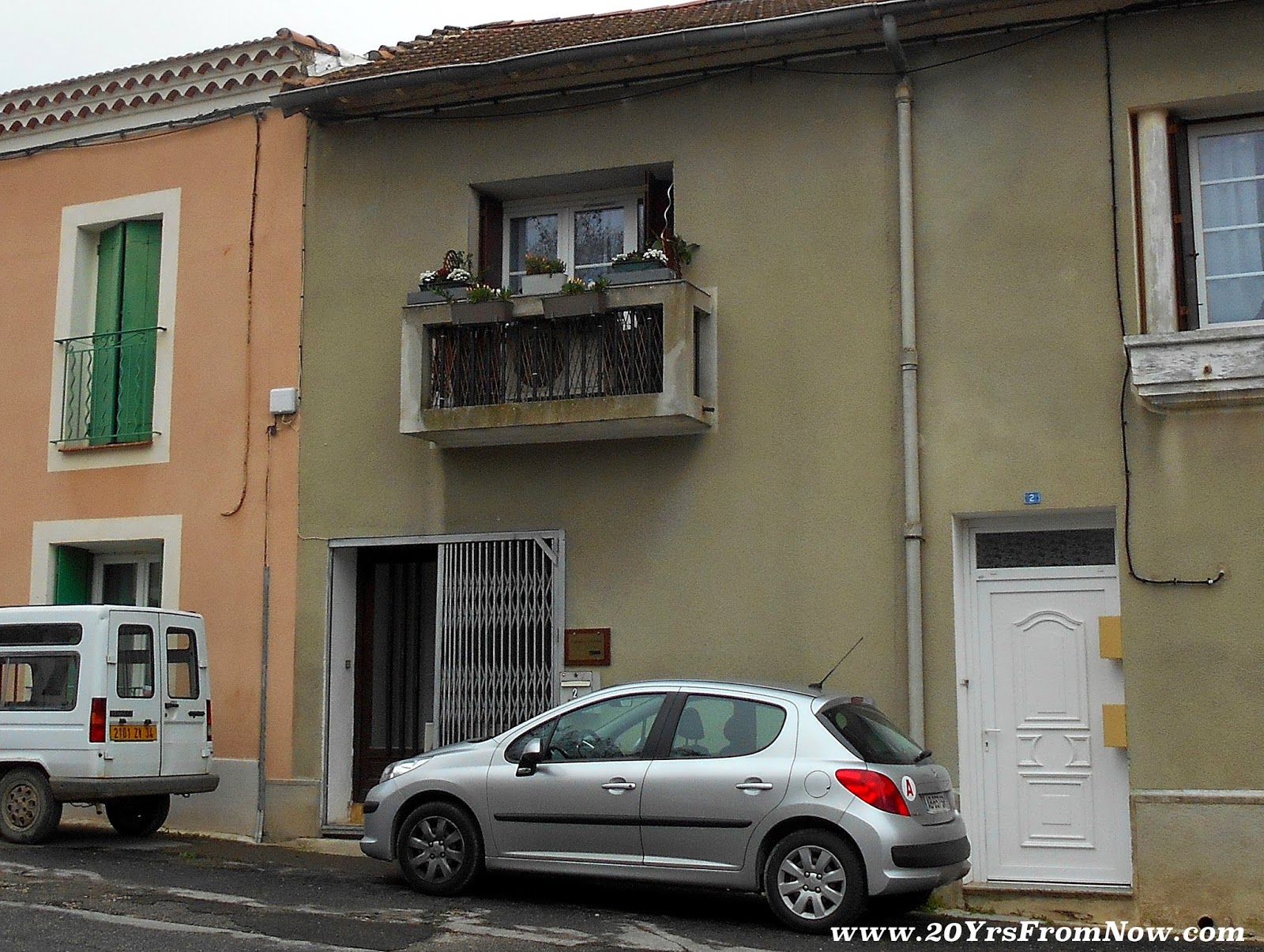 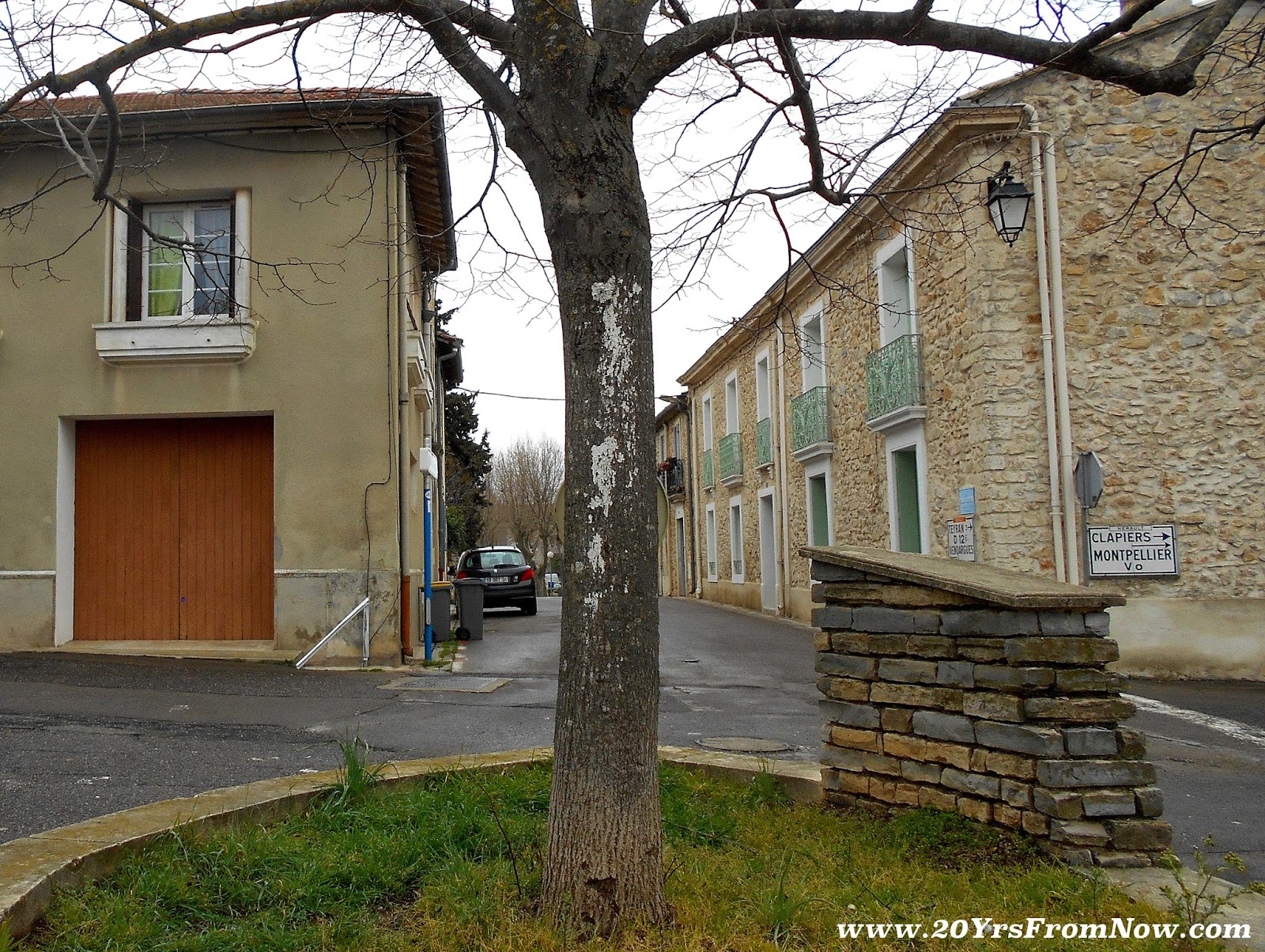 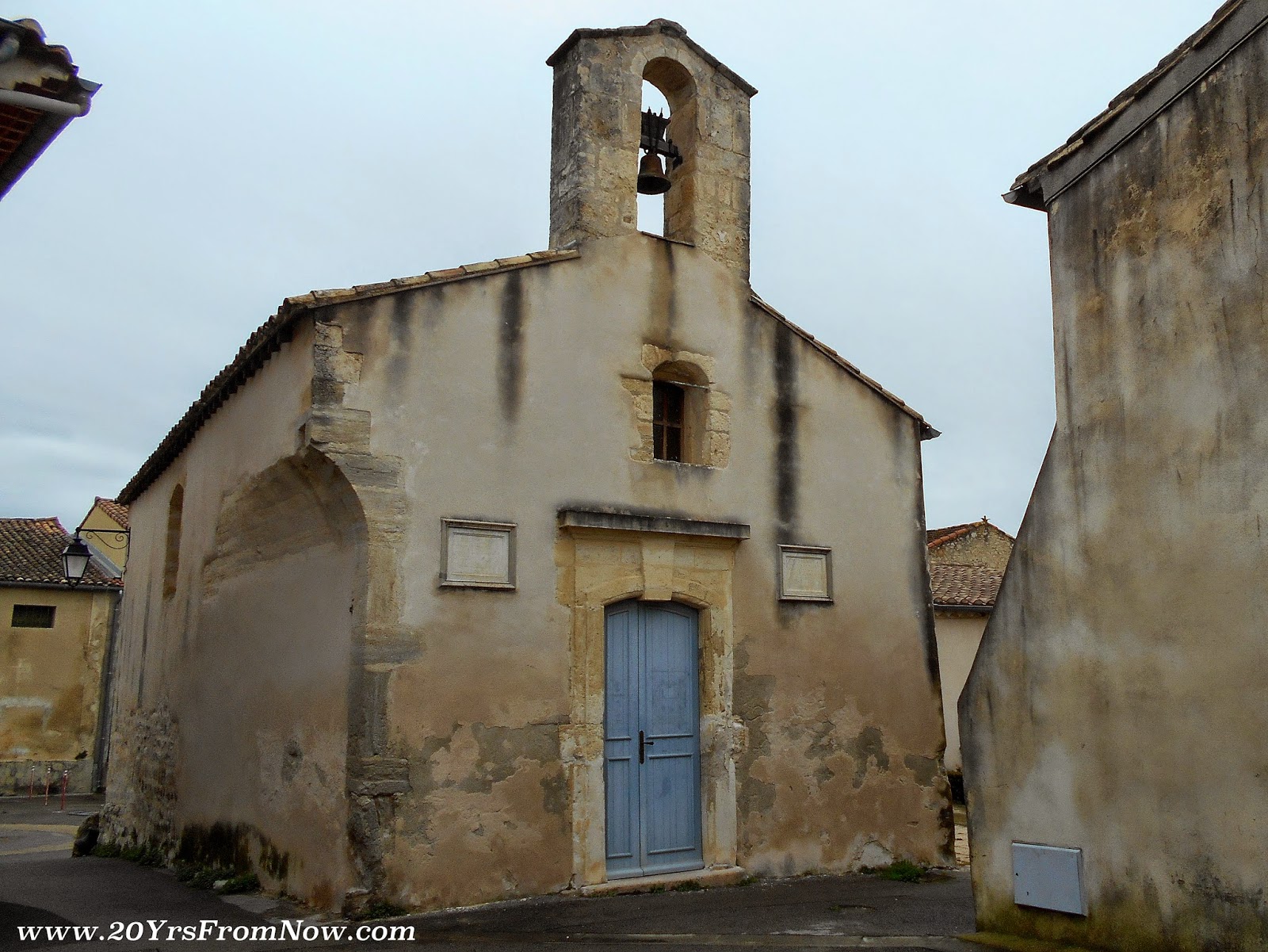 The juxtaposition of the old wall on the right with the newer apartment building on the left caught my attention. 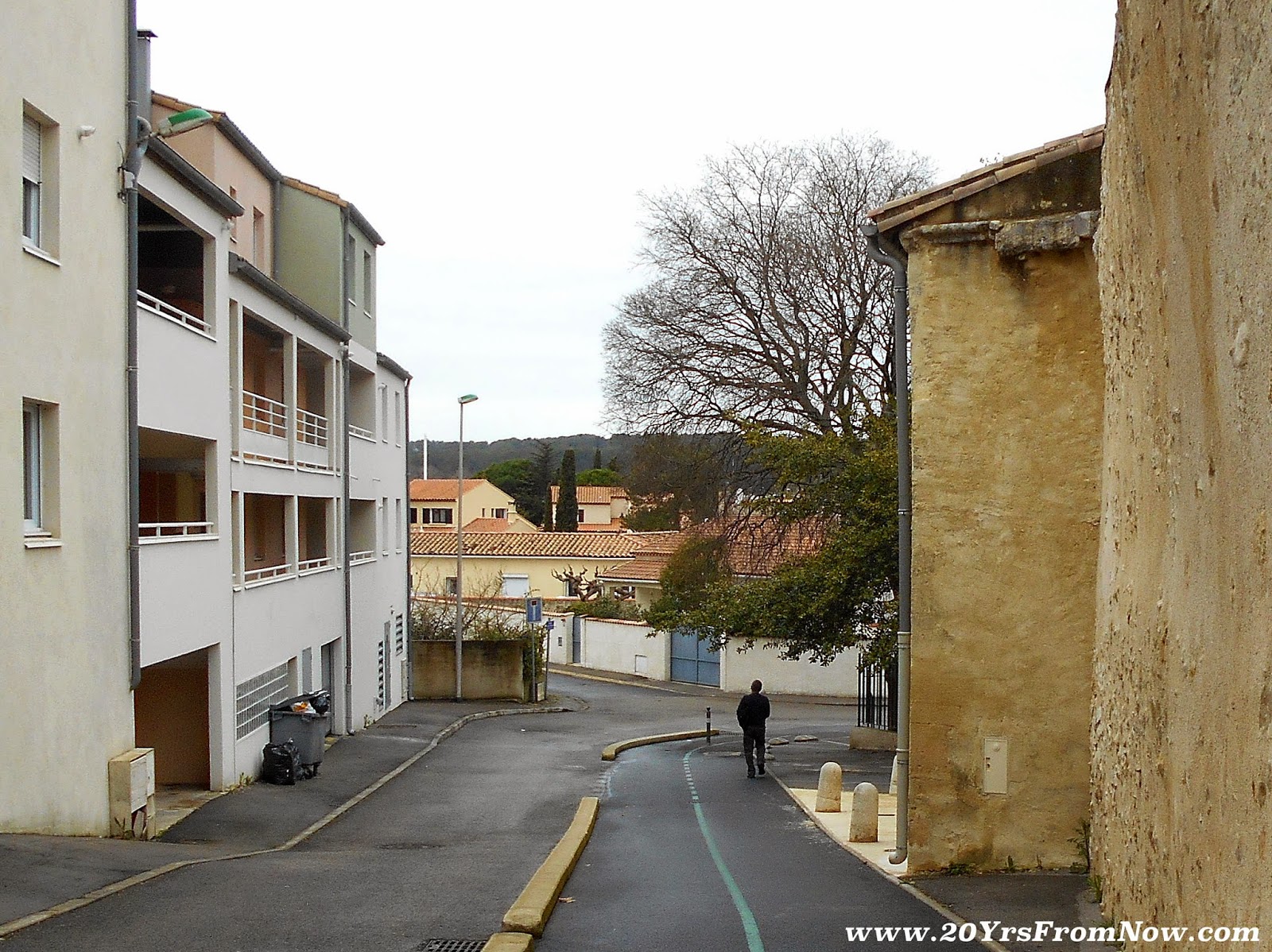 This residence gets my vote for best presentation. With so much flare going on outside I'd love to see how the interior's decorated. 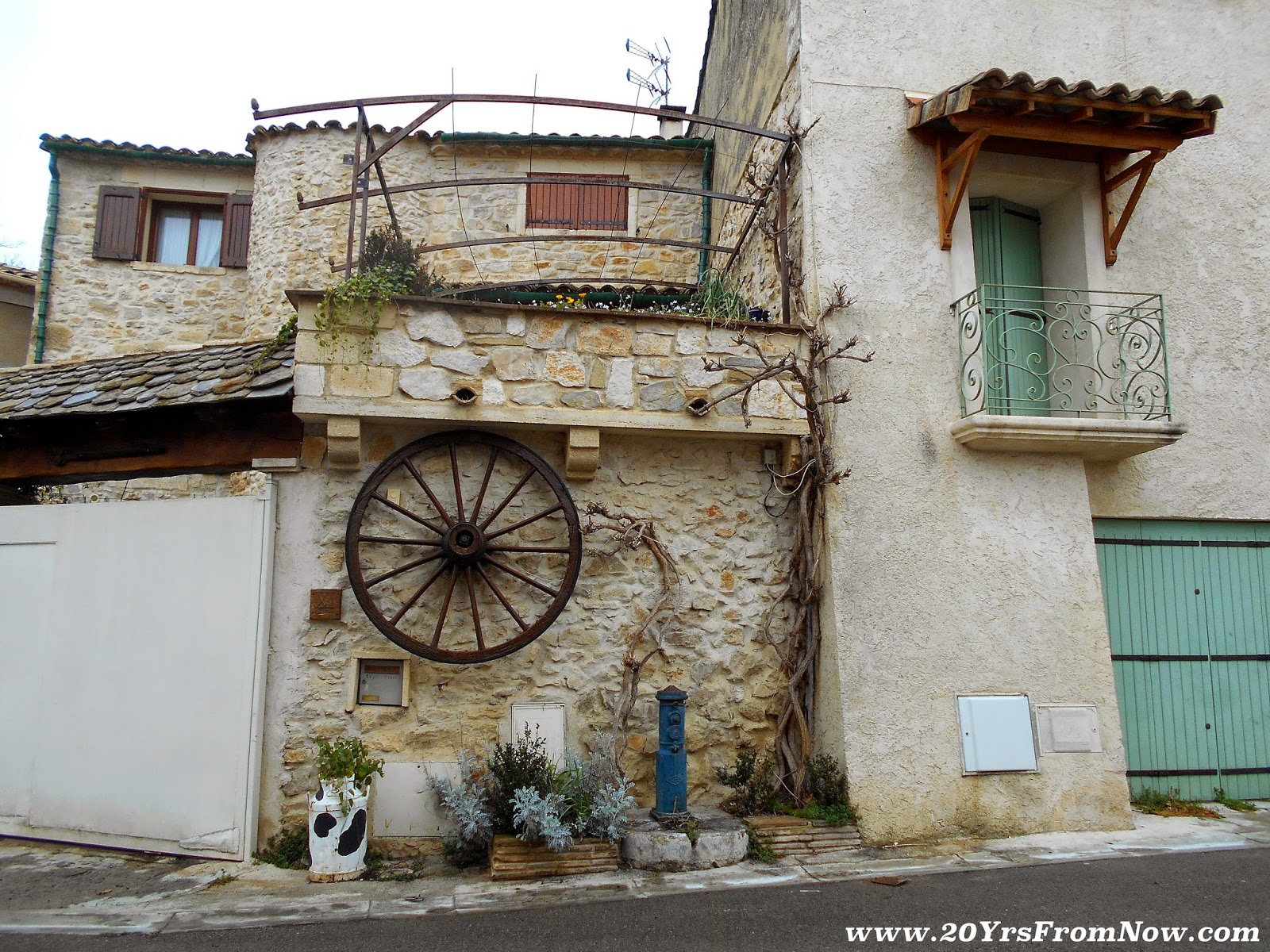 Across the street and echoing the amazing paint colour found on the doors above is this quaint living space. 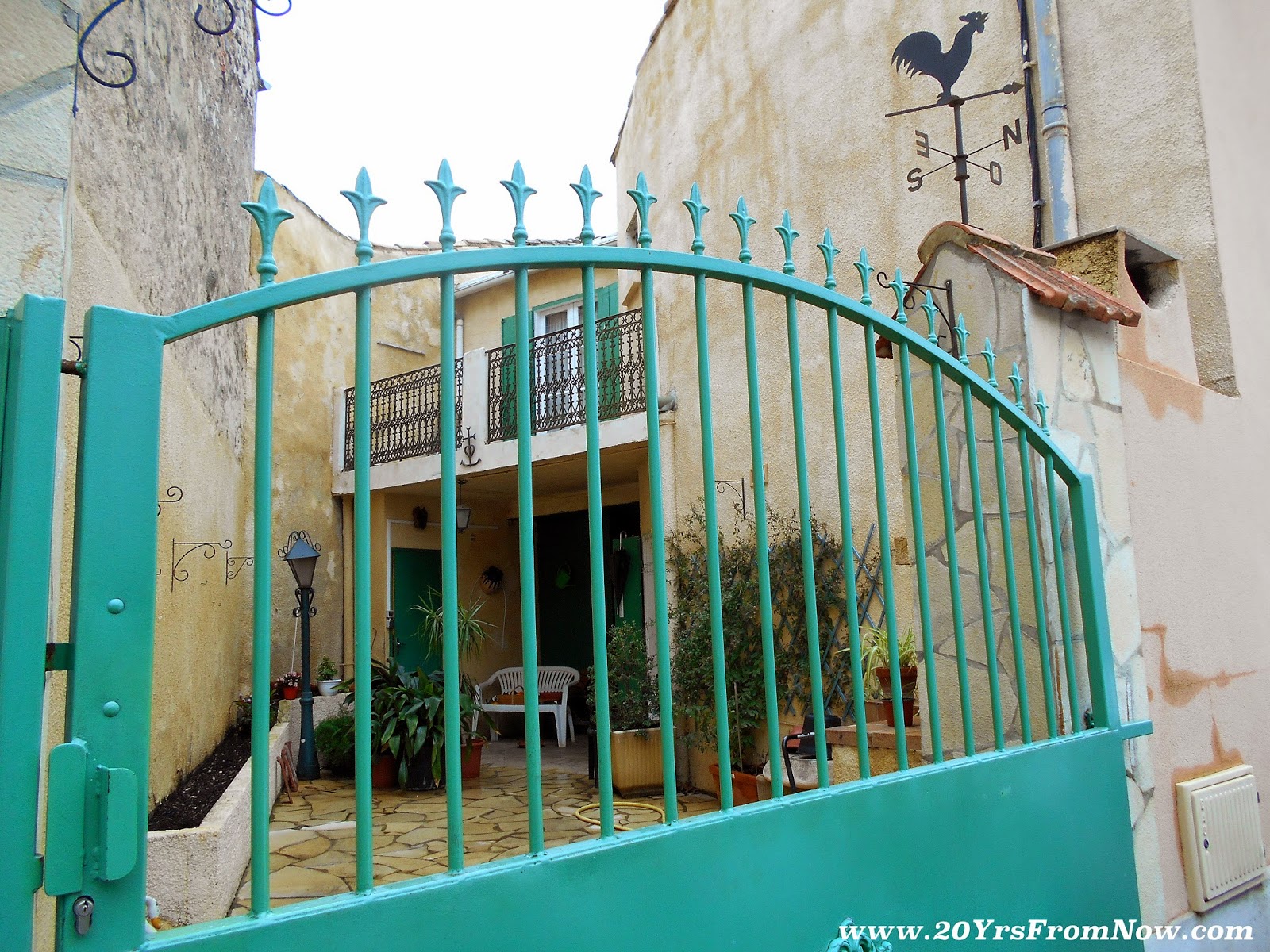 There is also a small church (header photo) that no doubt played a major role in the lives of so many of Jacou's residents in years gone by. The town also has lots of green space. Small parks are found within a few blocks of each other. 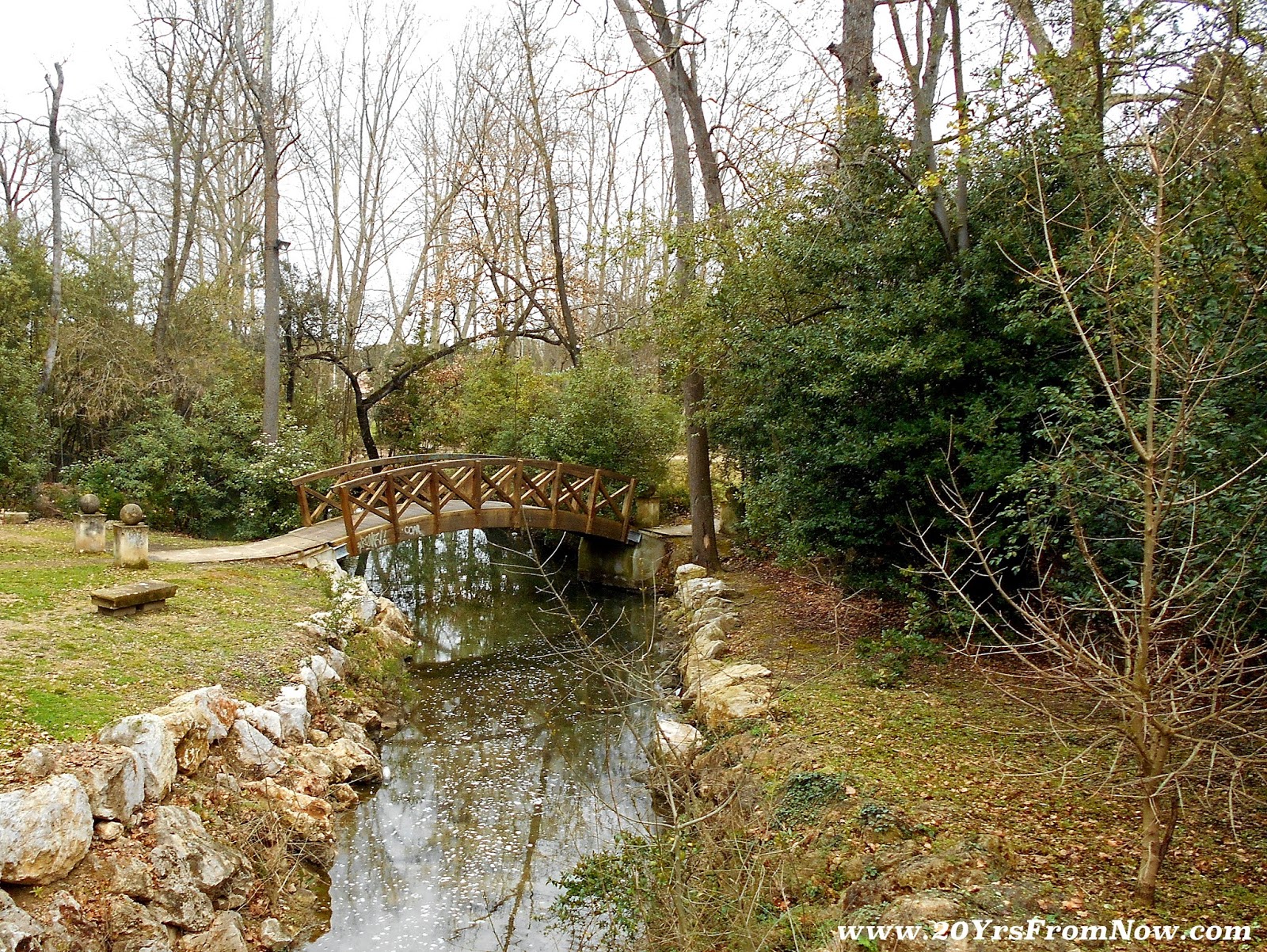 Adjacent to the tram station is this next park where we spotted what looked to us like a very serious game of boules (similar to the Italian bocce ball). The objective is to throw or roll a heavy ball as close as possible to a small target ball. The men were quite congenial, but when it came time to determine the winner all eyes focused on the results determined by a tape measure. 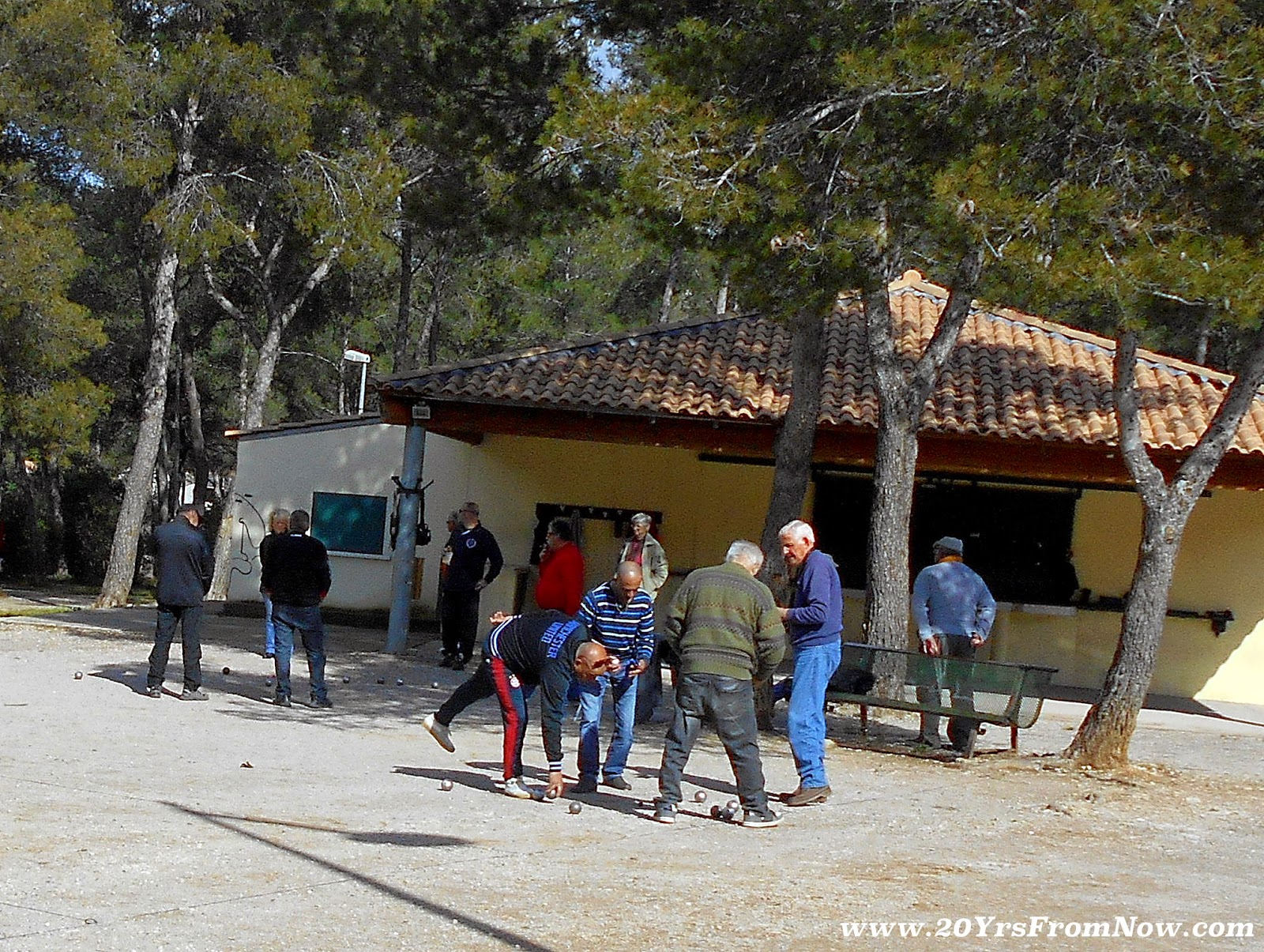 Walkways zigzag from one street to another... 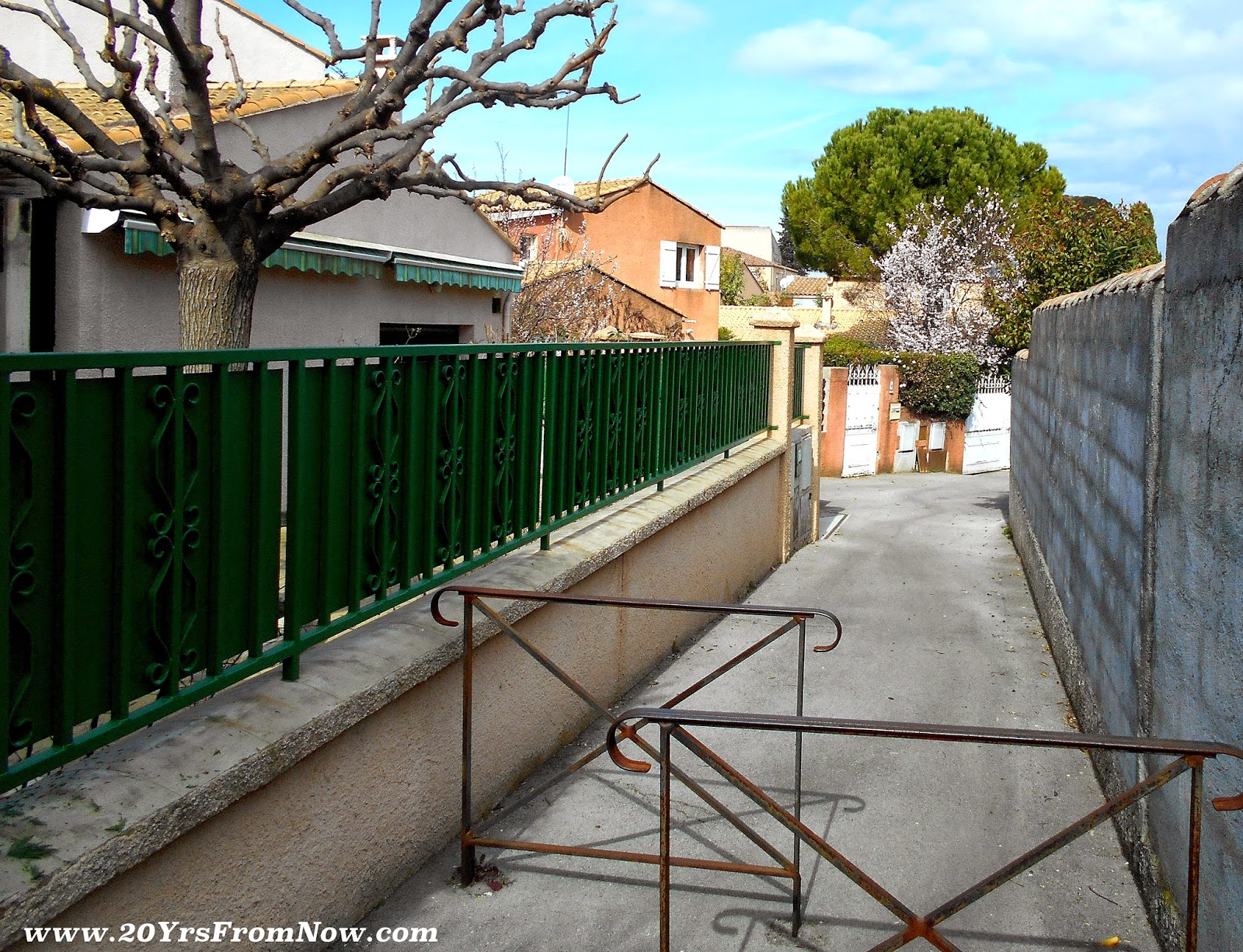 And sometimes I was able to stick my camera through a fence to capture a better photo of the yard and home. 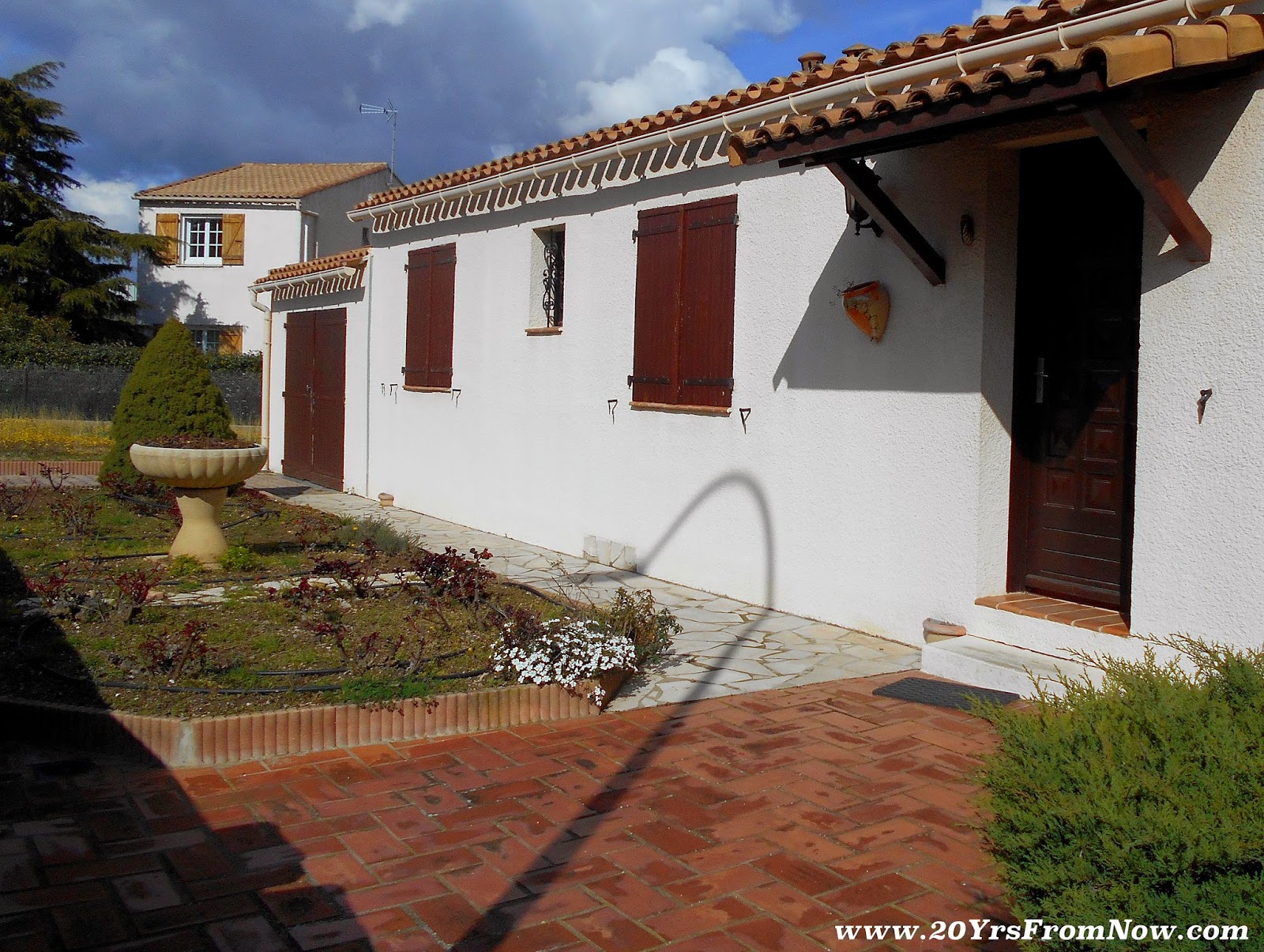 These homeowners used the full length of one exterior wall as a focal point for a mural that features a boxer dog. 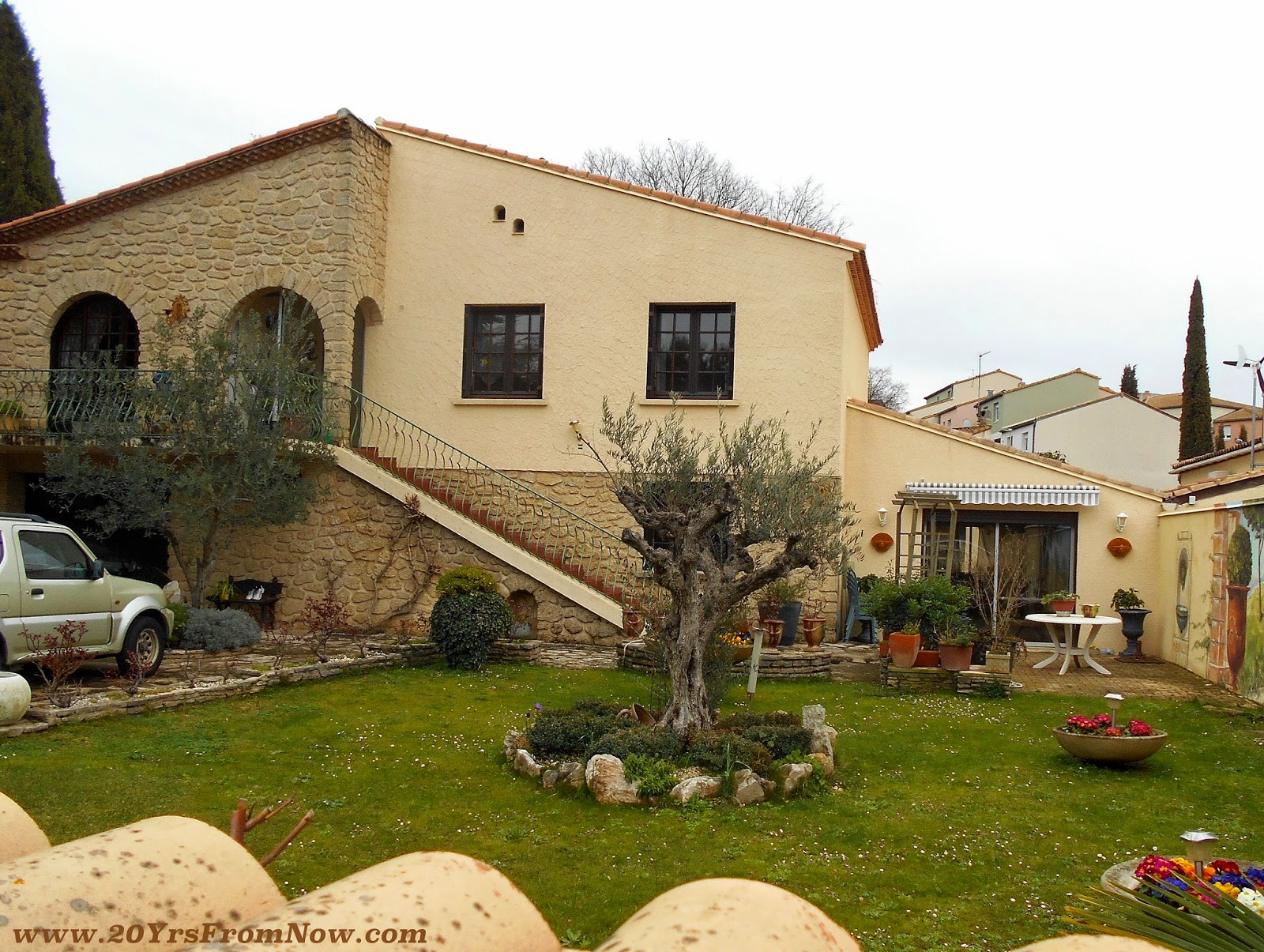 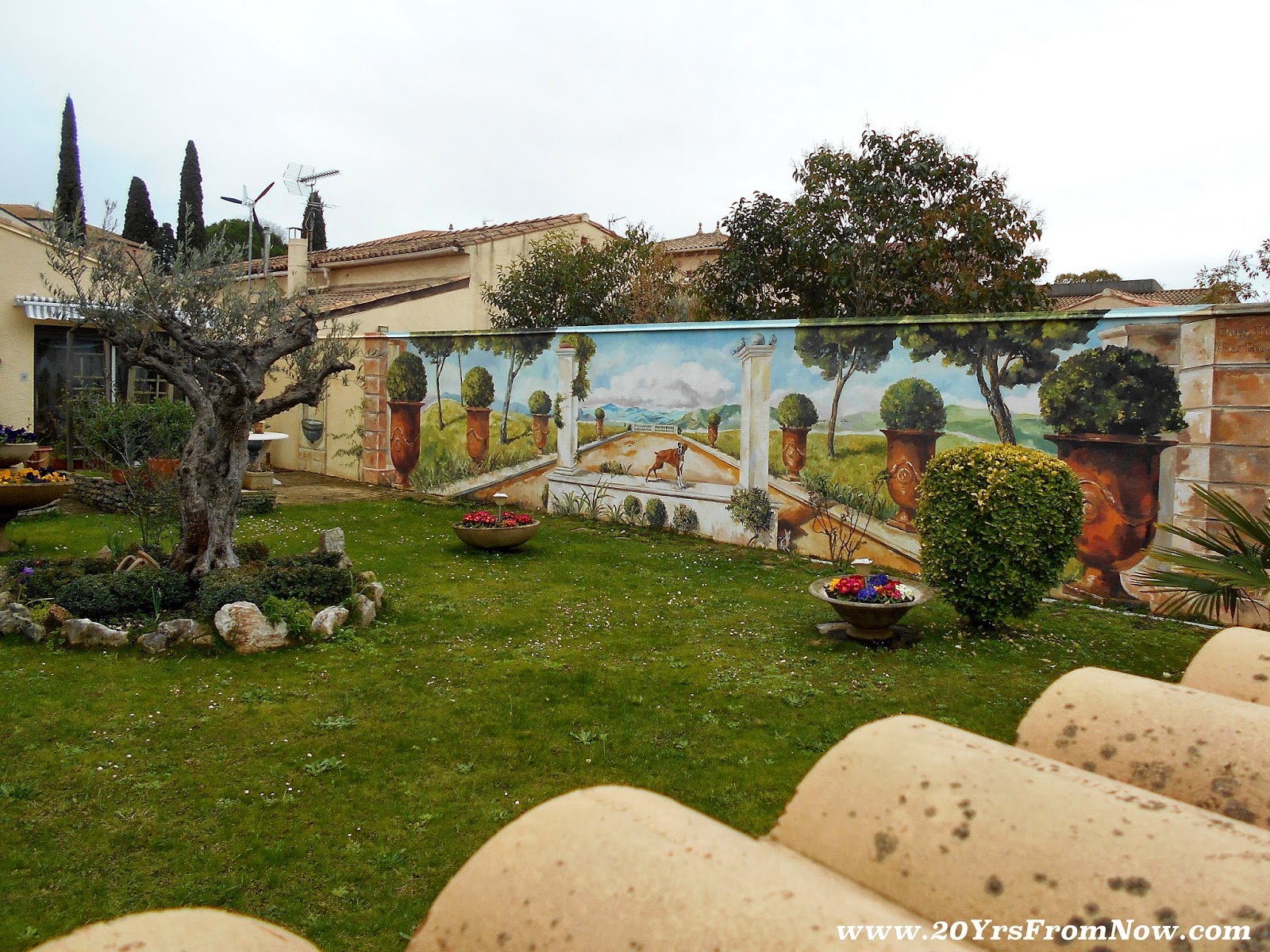 The folks behind this wall managed to conceal most of the exterior of their home to passers-by. 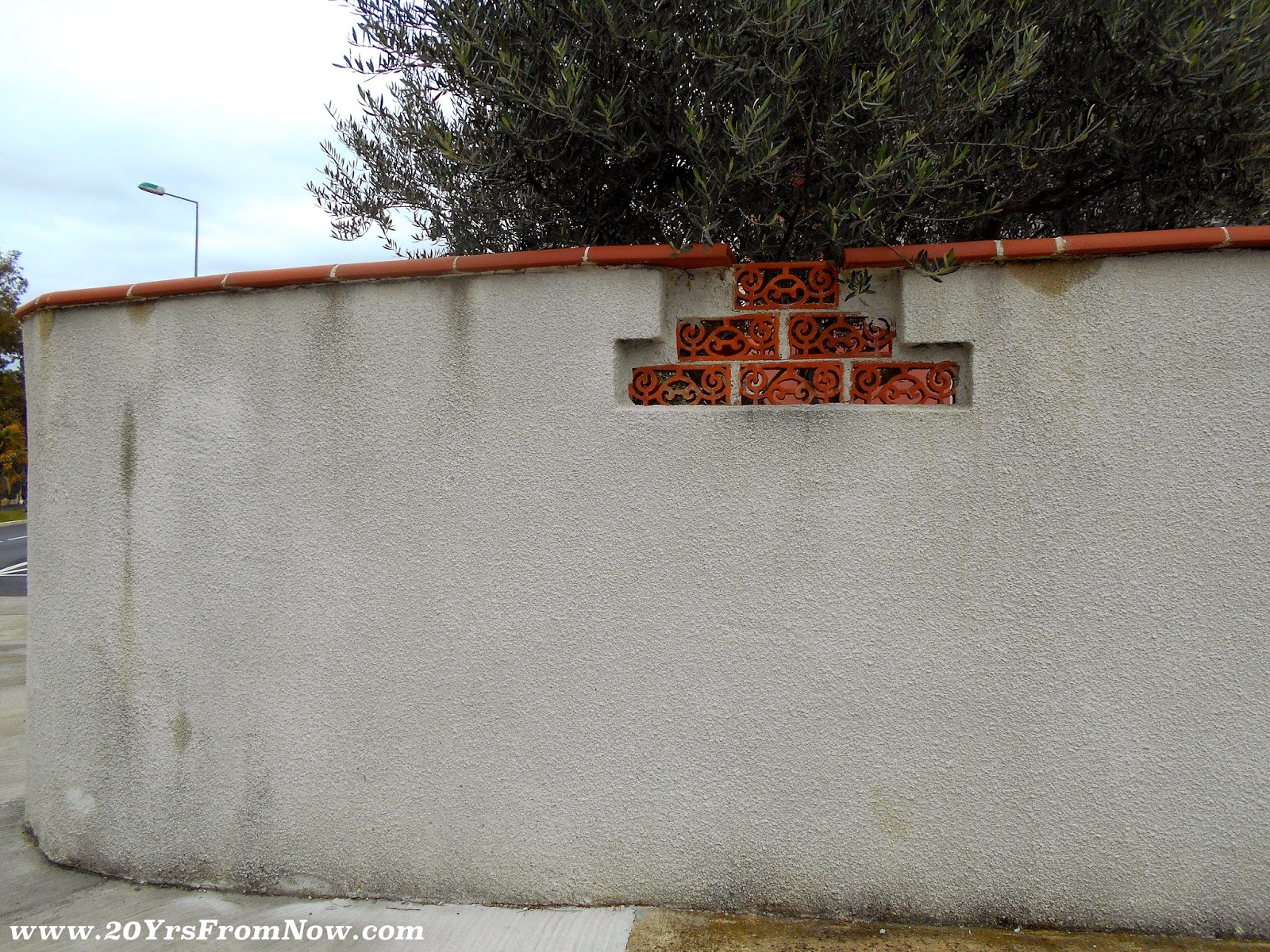 When I looked up, however, I noticed this amazing sight. Neither the window nor the vine is real...it's been painted onto the wall. 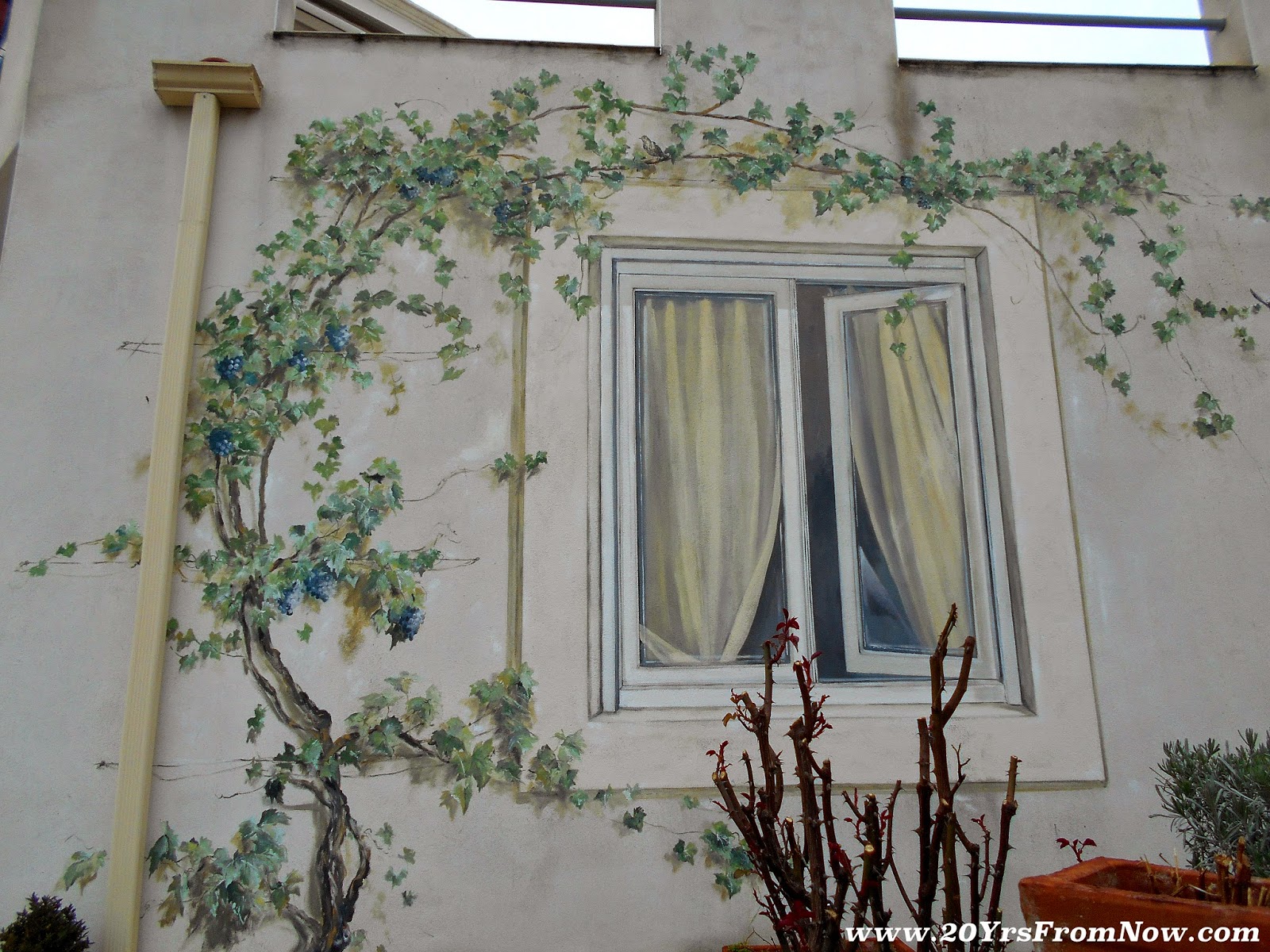 The most interesting house is Jacou, however, belongs to Jake and Petra. They've decorated it with their favourite chew toys and love climbing on the various wooden ledges. 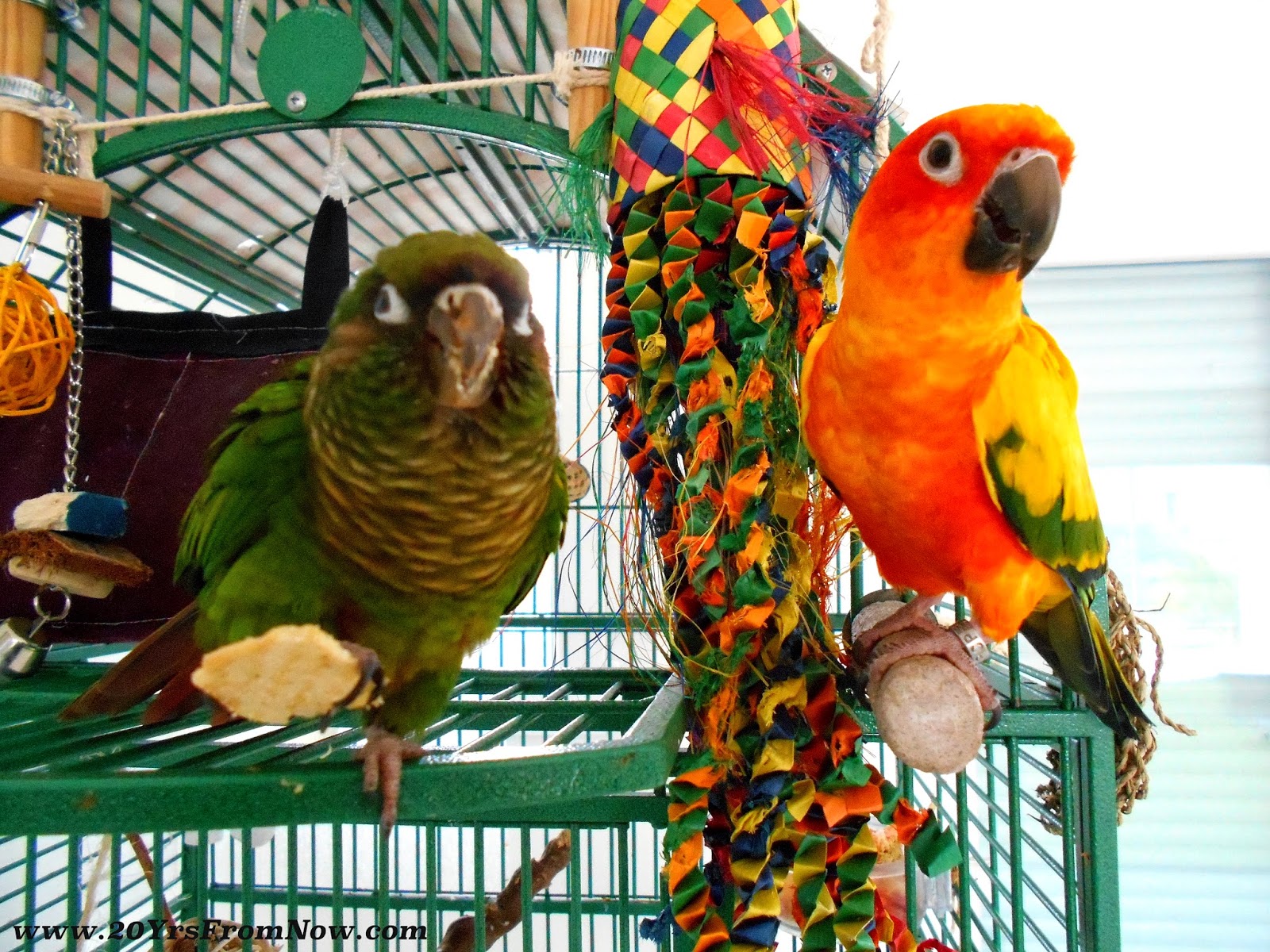 They even agreed to be featured in a short YouTube video. Check it out. It's Jacou Cool!