One of our favourite places in all of England is a short walk outside of Winchester proper. The Hospital of St. Cross is Britain's oldest almshouse and was founded by William the Conquerer's grandson Henry of Blois between 1132 and 1136. 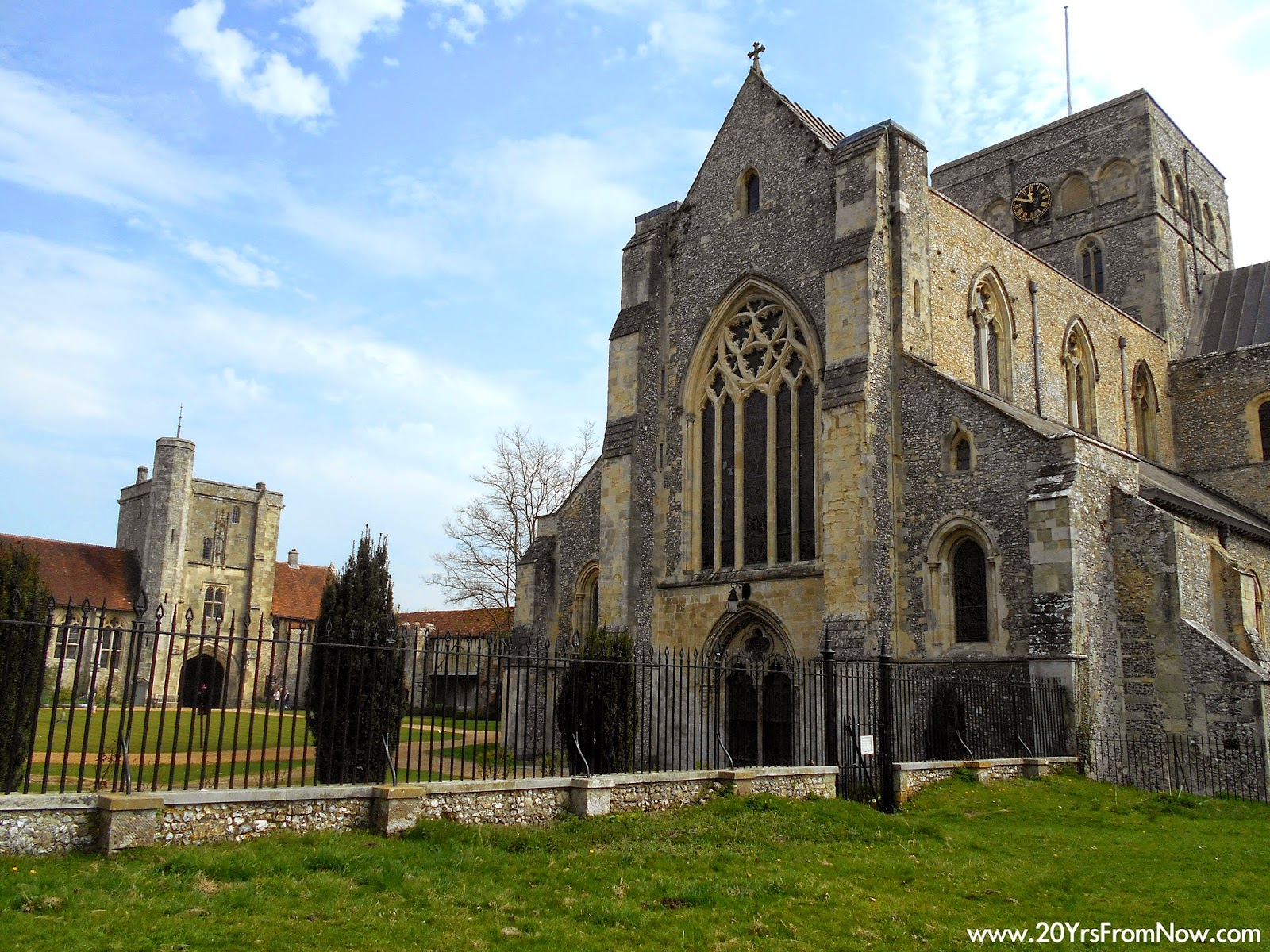 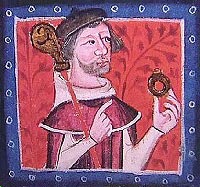 Legend has it Henry of Blois who was also Bishop of Winchester took a walk in the Itchen meadows and met a peasant girl who begged him to help her people who were starving. Moved by her plea he spotted the ruins of an old religious house and vowed to open a hospital on this very location.


The word "hospital" as used in this context means "hospitality" and for over 850 years St. Cross has provided food and shelter to men in need. The tradition continues to this day.

The 25 men, called Brothers, are typically 60+ years of age, single, divorced or widowed, no longer employed and with low or limited income. They belong to one of two orders: the Hospital Foundation (Black Brothers) or the Order of Noble Poverty (Red Brothers). They are not part of a religious order, but are expected to wear their robes when outside the property. The next photo was taken to commemorate a visit by Camilla, Duchess of Cornwall.

It is because of this non-religious aspect that its Norman church survived Henry VIII's reformation and the English civil war of the mid 1600s. Buildings are intact and day-to-day items that have been used for centuries are in remarkably good condition and many are on display. 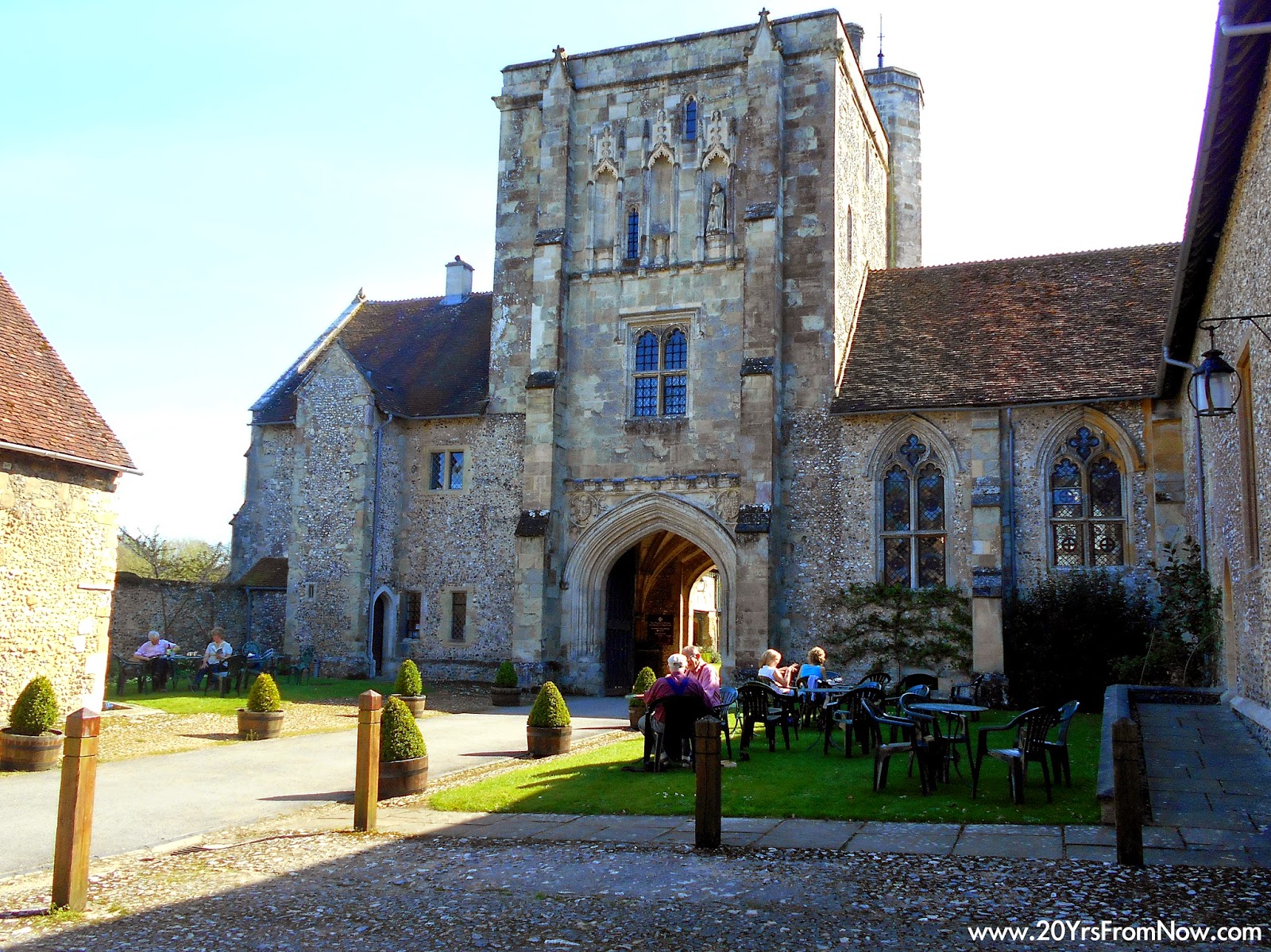 Entry into the grounds is via the archway seen in the above photo. In a small room off to the left you purchase an entry ticket, browse the gift shop and if you remember to ask the porter on your way out you will receive the Wayfarer's Dole (a small beaker of beer and morsel of bread). We forgot, but no worries. There's always our next visit.

Stepping into the courtyard there is a palatable sense of serenity and peacefulness. John took time to read the brochure while I did my best to capture the moment in a series of photos. 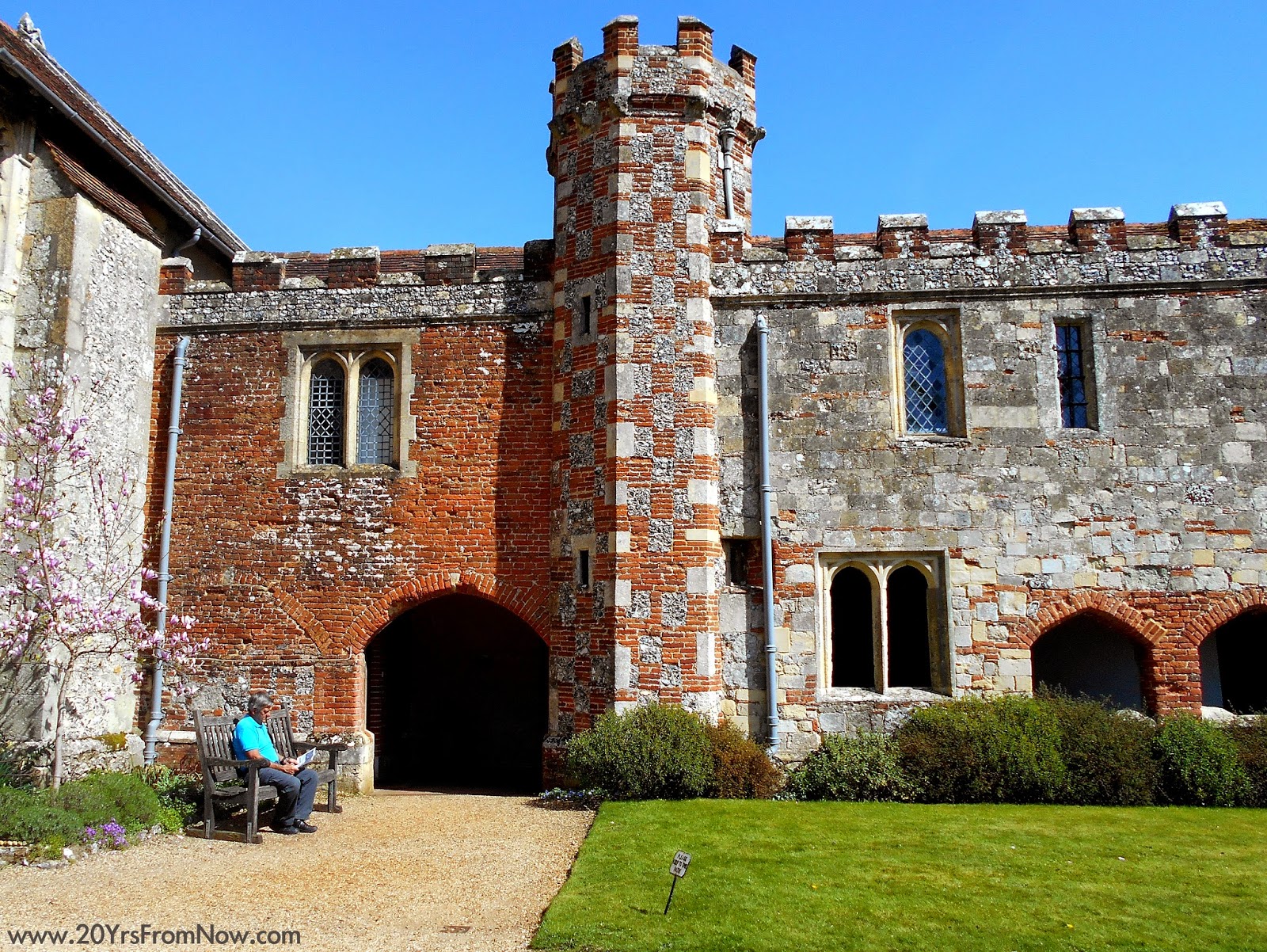 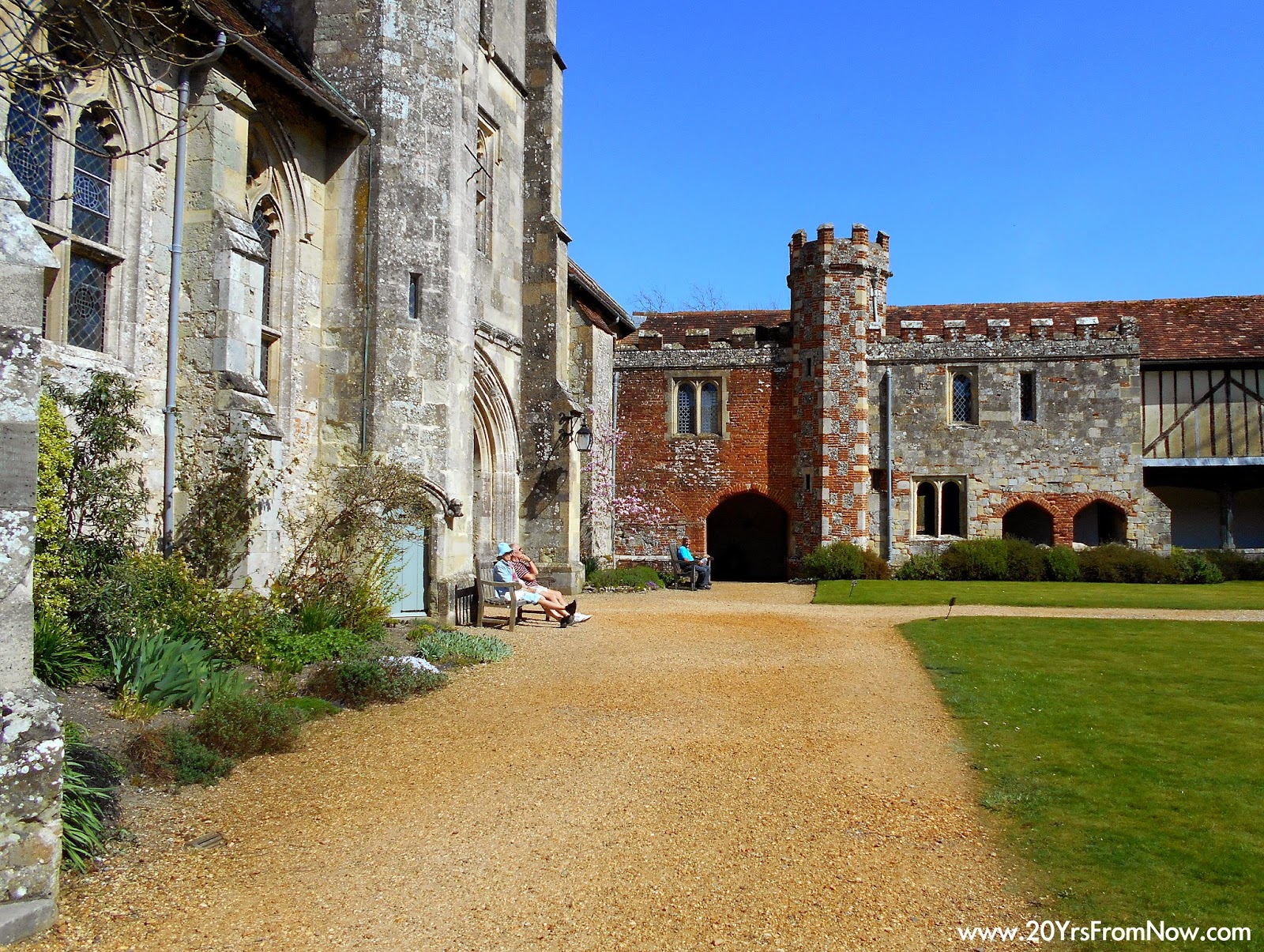 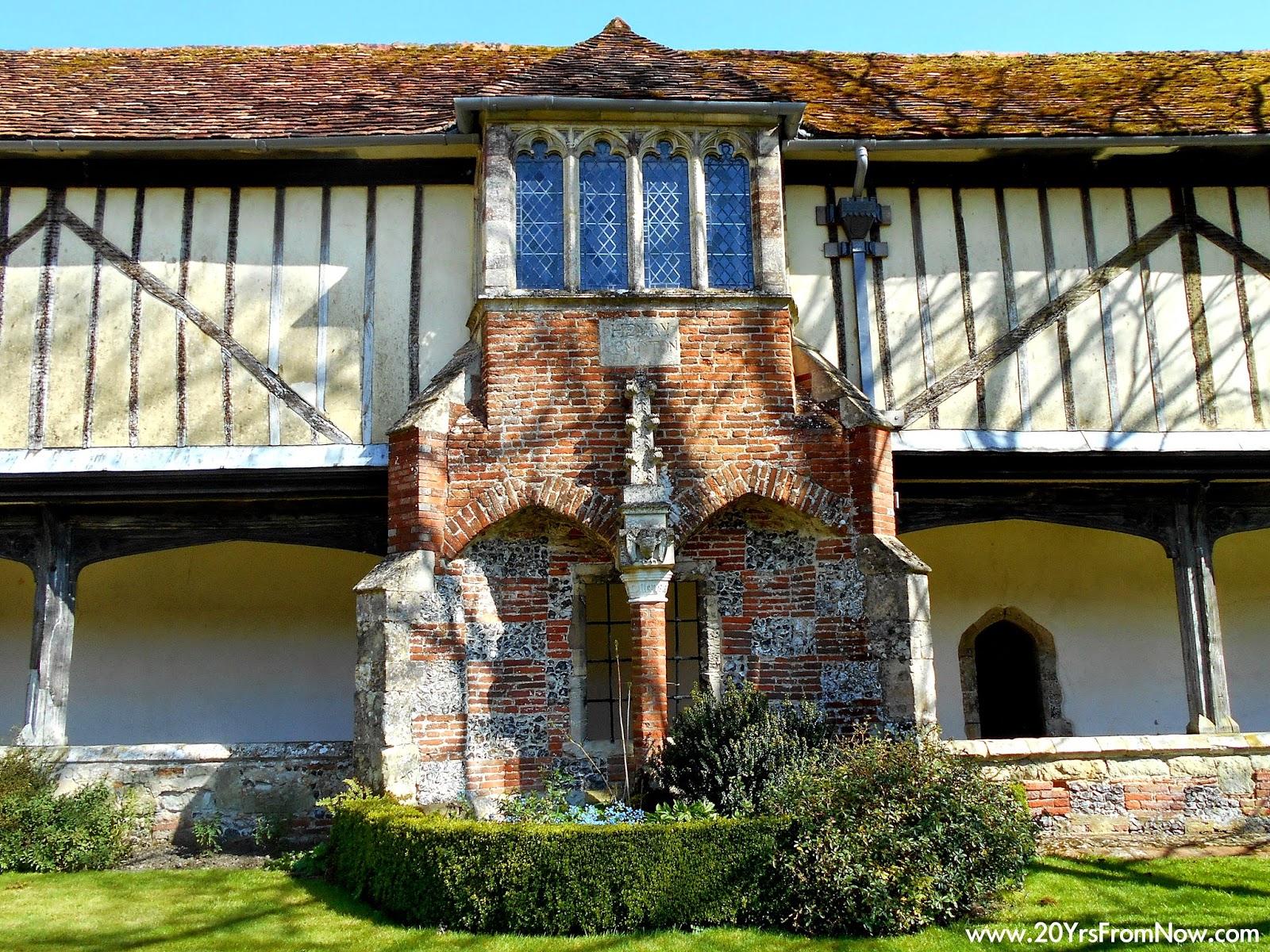 The arch on the far left (photo below) is the entrance to the Brethren's Hall. 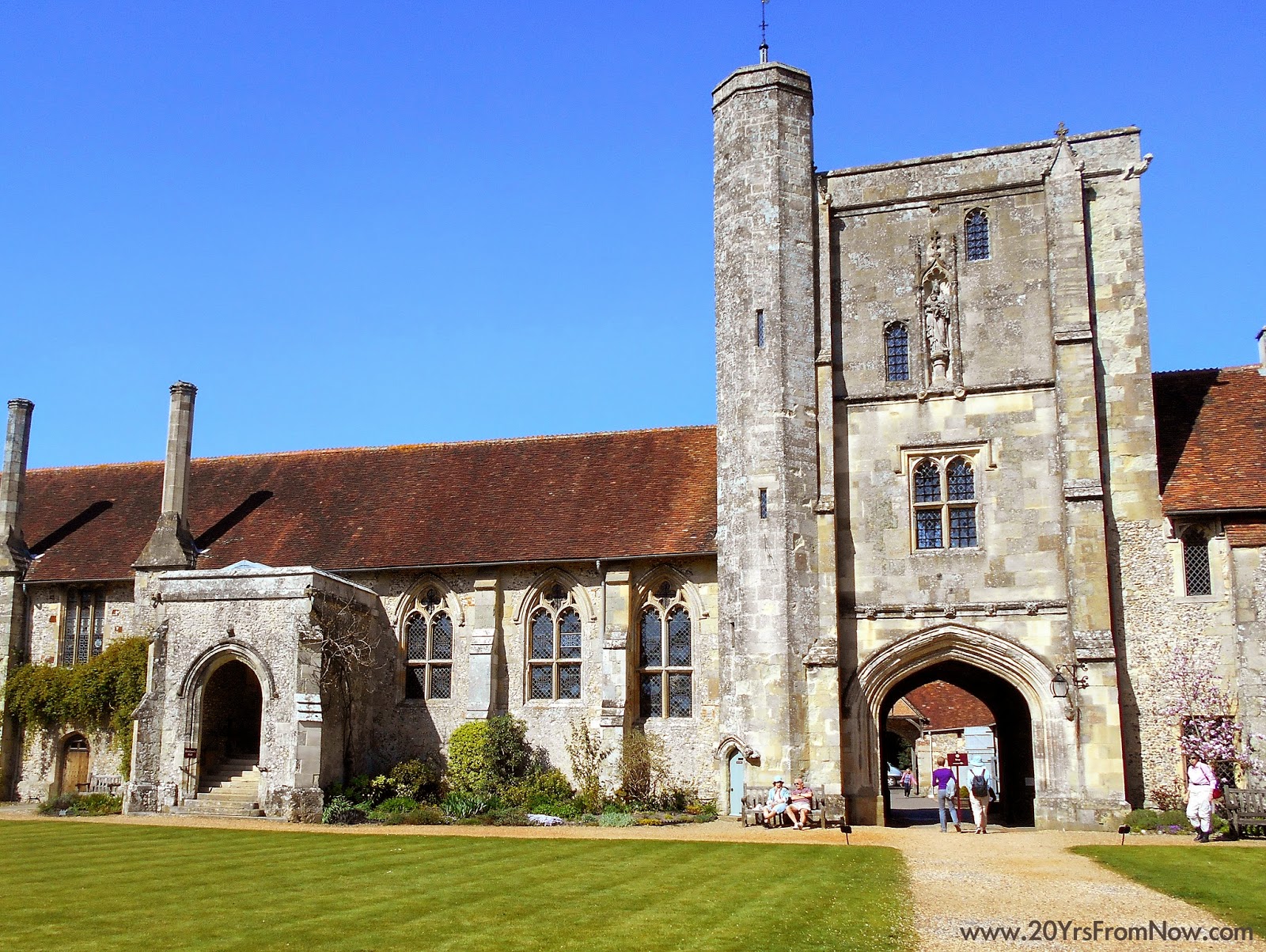 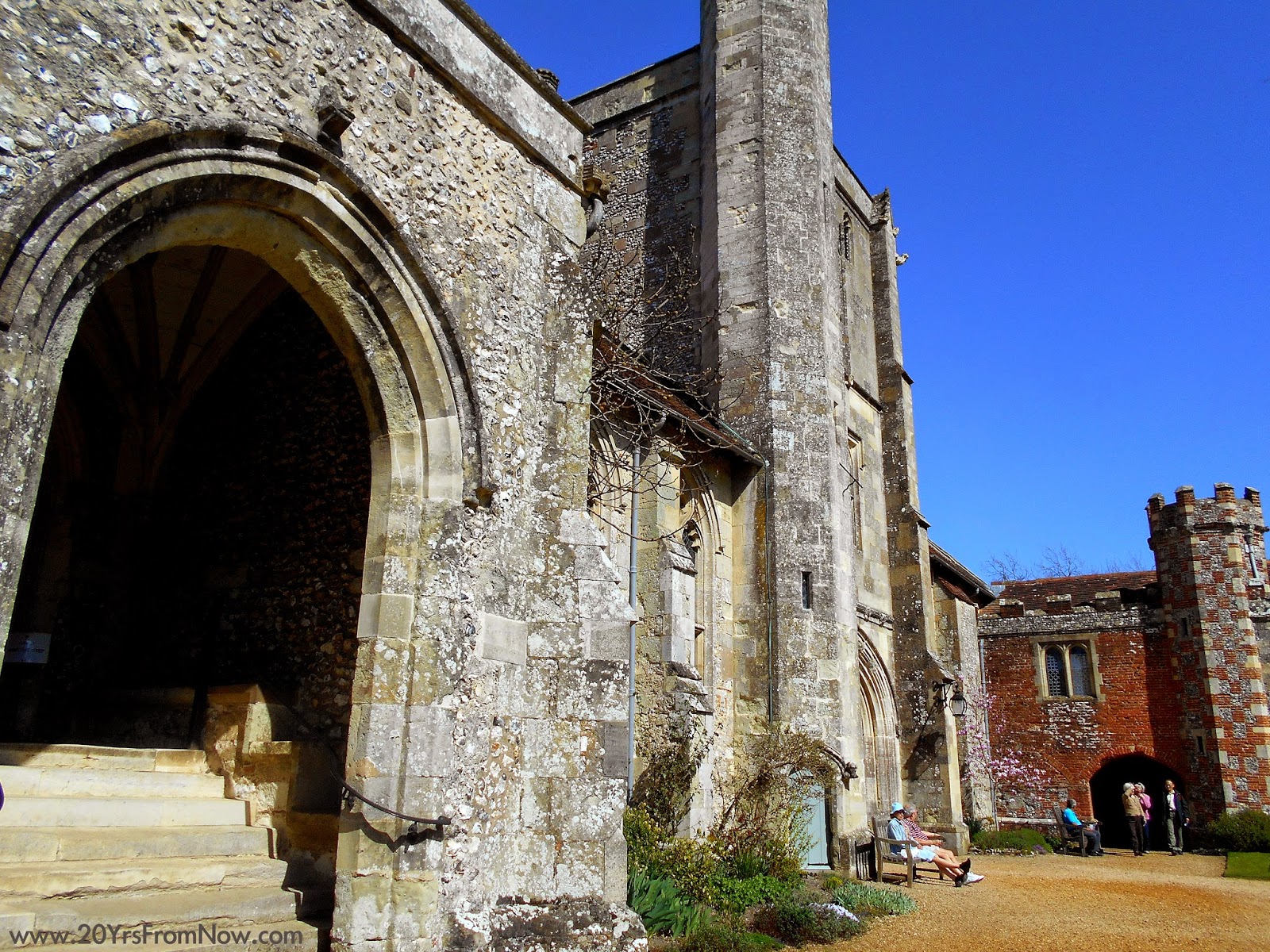 It is here where the Brothers gathered and ate their meals in centuries past. 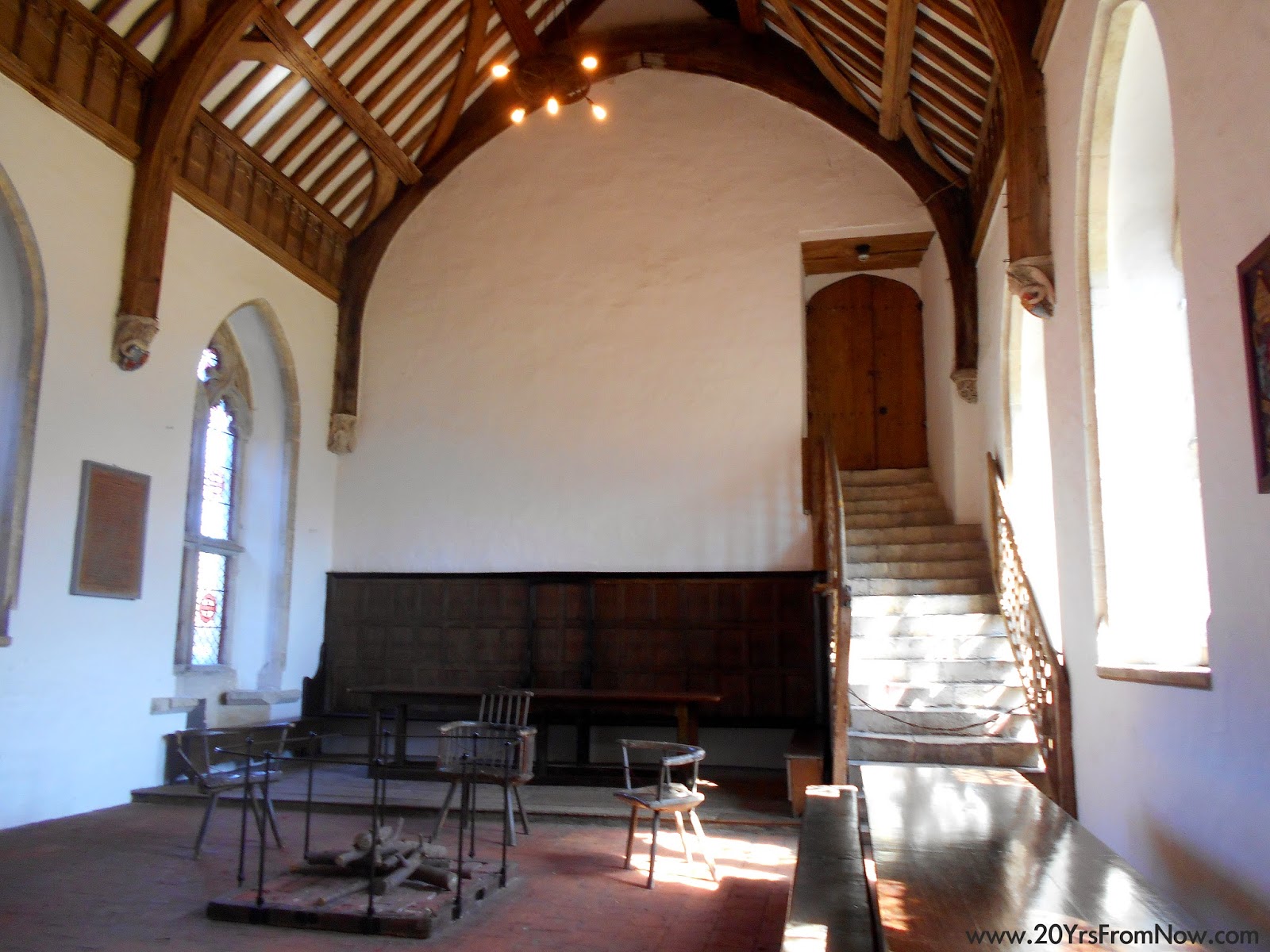 The furnishings are original including the central hearth where a charcoal fire would keep the Brothers warm during the winter. The stairs lead to the Master's lodgings and the raised platform is where he would be served his meals.

This particular chair has no doubt accommodated quite a number of Brothers over the years. 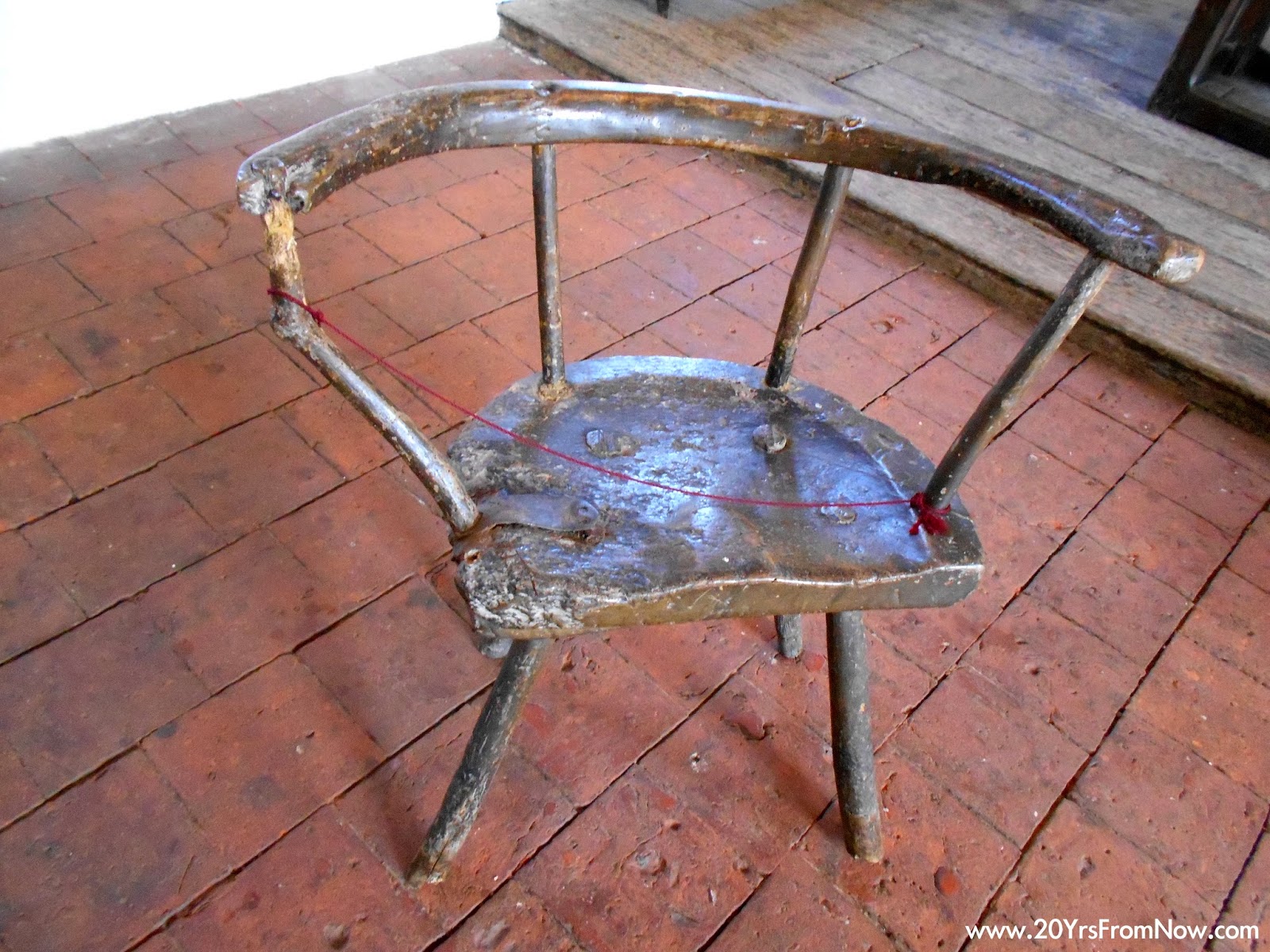 At the opposite end of the hall is the musician's gallery (upper level). 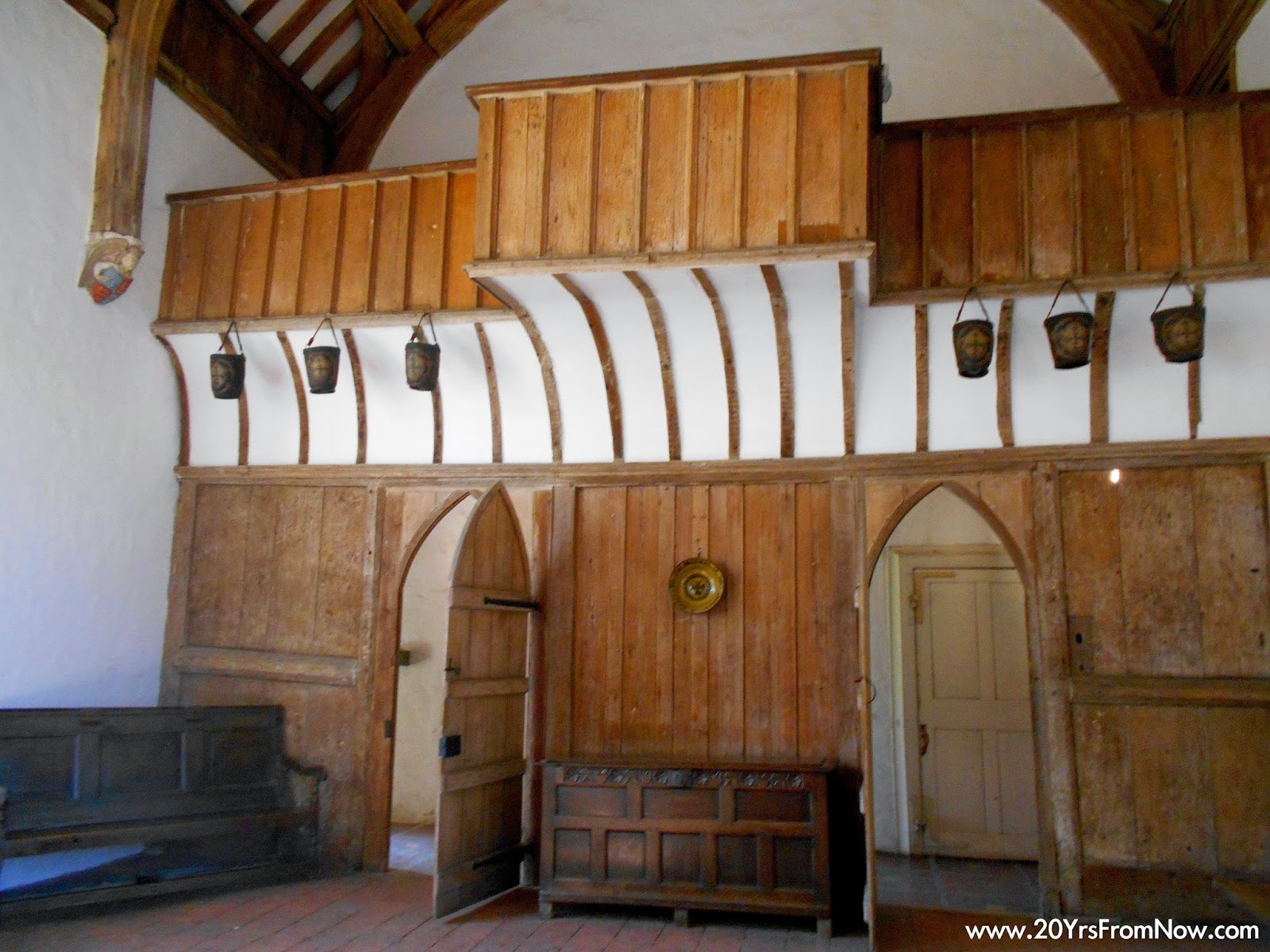 Stepping out of the Brethren's Hall and turning right in the hallway leads to the kitchen. 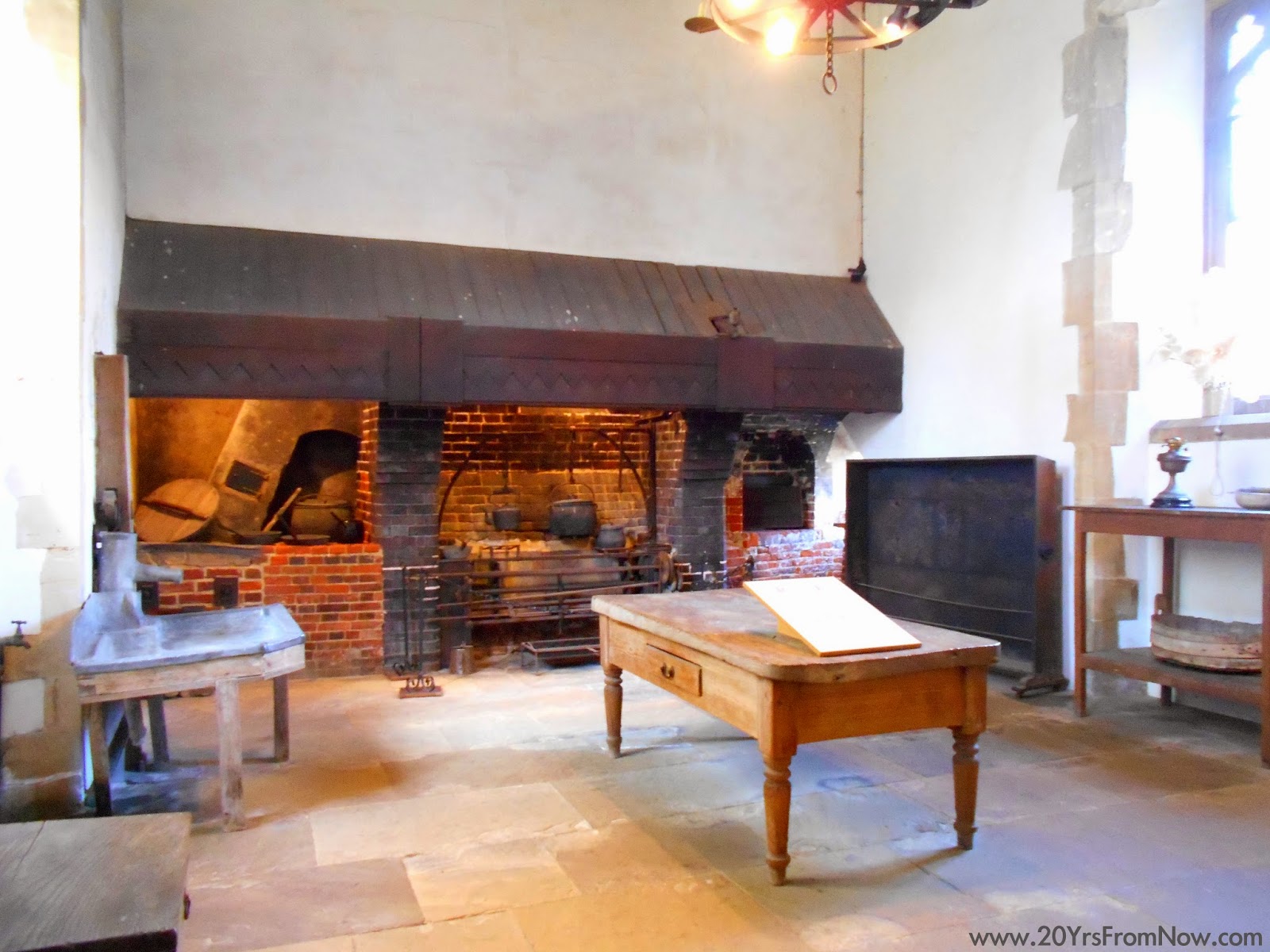 More steps lead down to the cellar where food was originally stored. Later, however, its purpose changed to store the copious amounts of beer required because water was unsafe to drink. 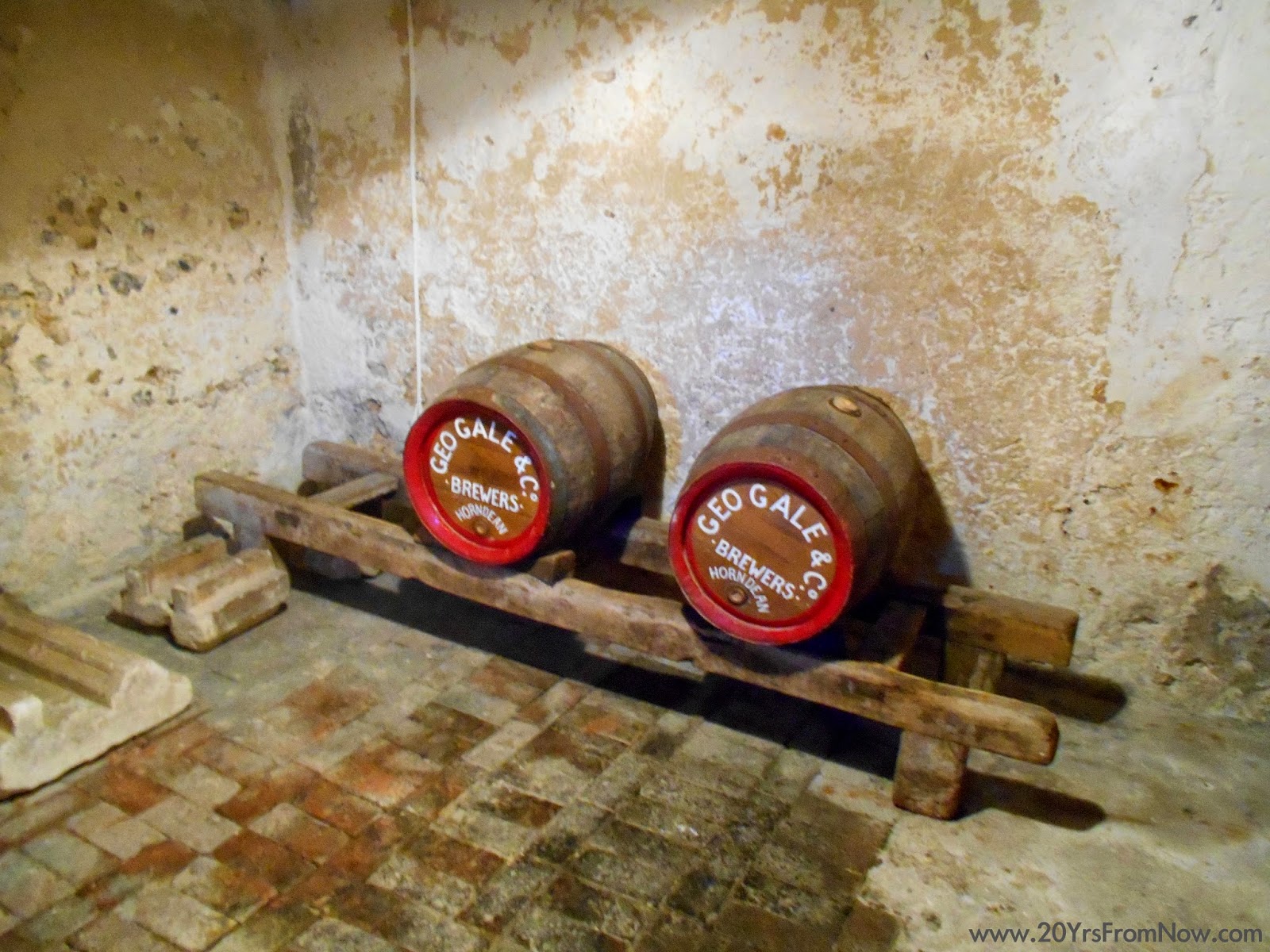 Retracing our steps we head across the yard to the Norman church. 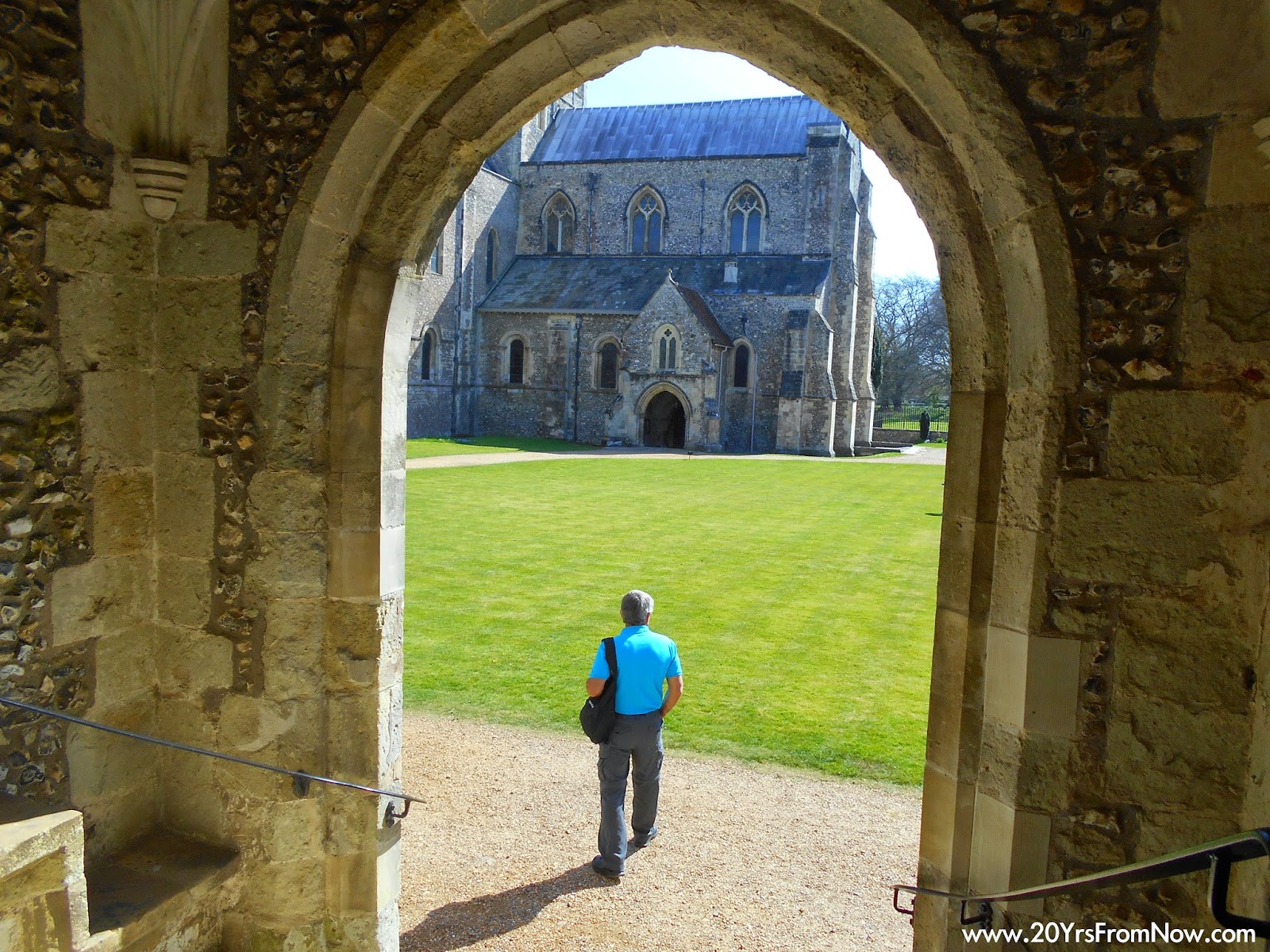 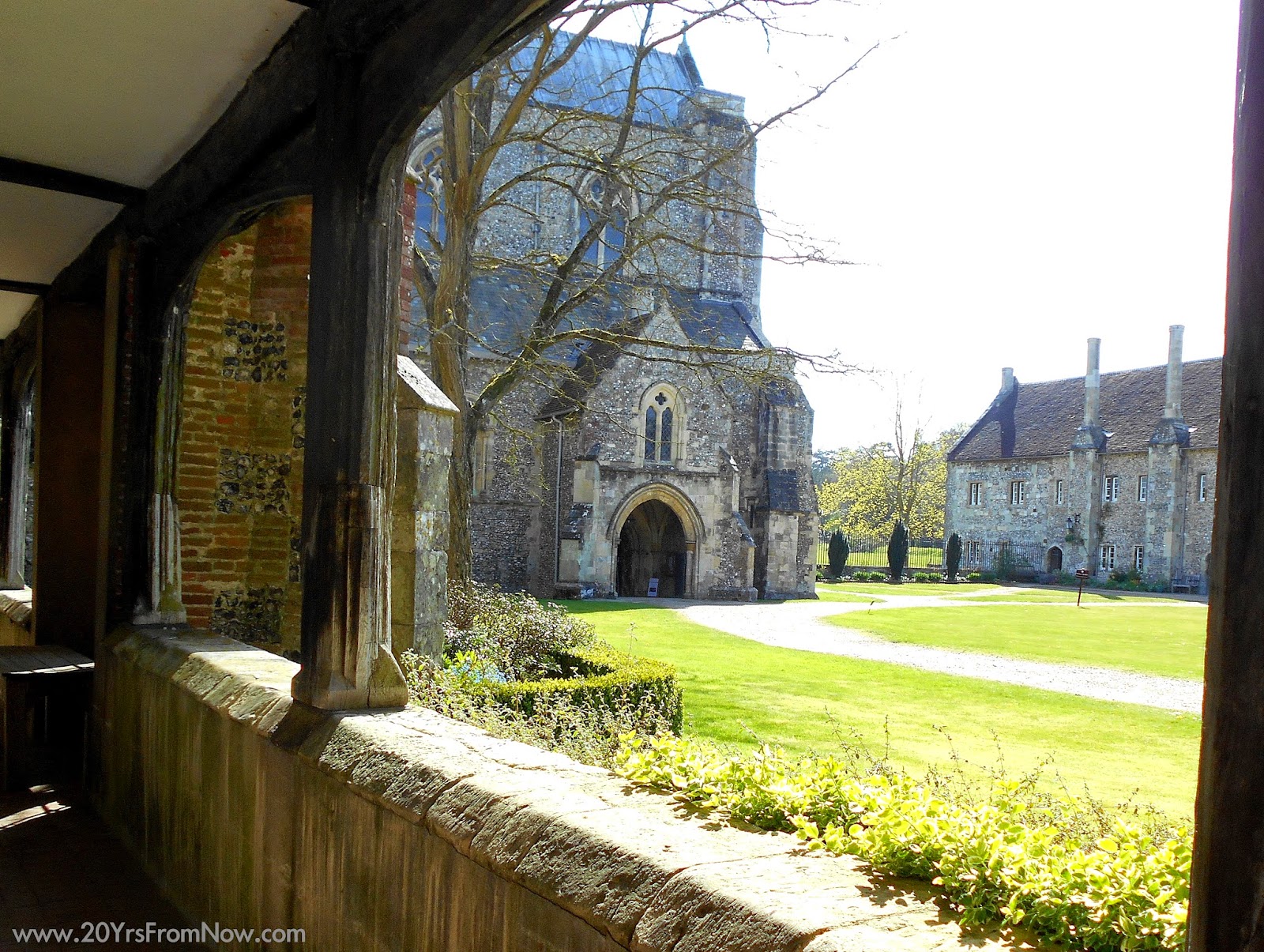 The doorway's floral decoration is lovely, but what caught John's attention was the indentation of the stone threshold worn from centuries of use. 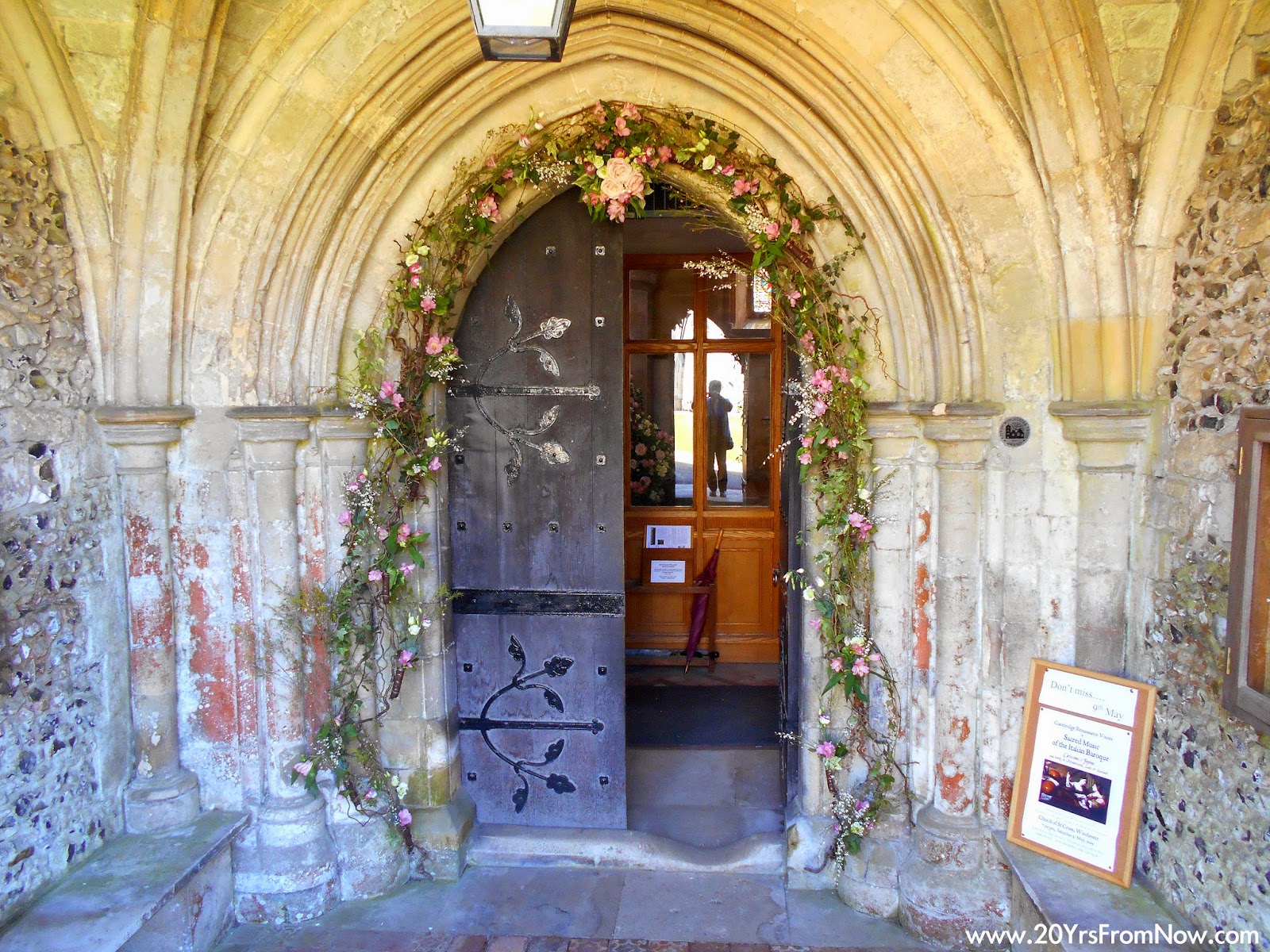 I mentioned earlier the serenity of St. Cross. Upon entering the Norman church that same feeling seemed to expand exponentially. There is definitely something very special about this place. 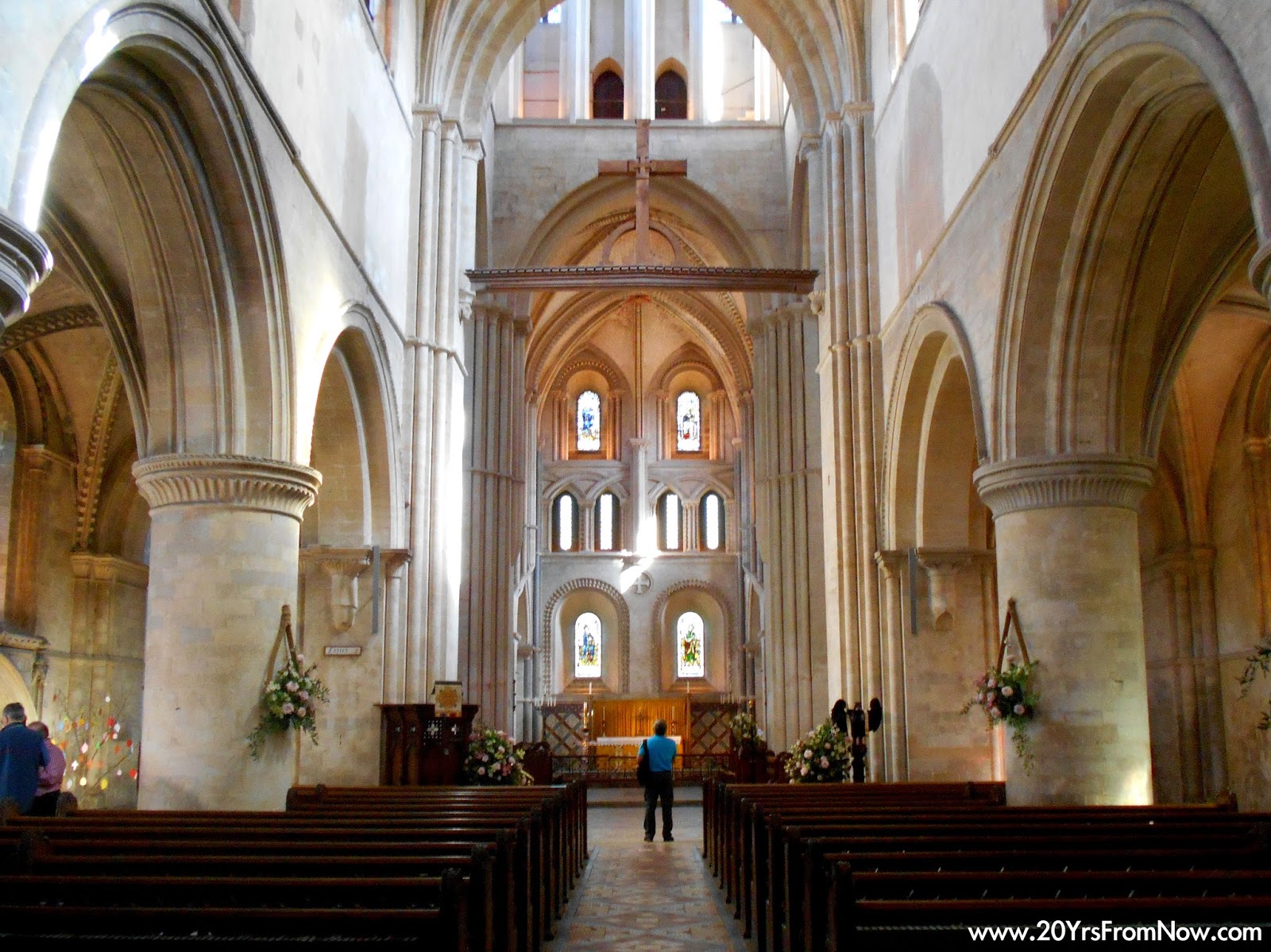 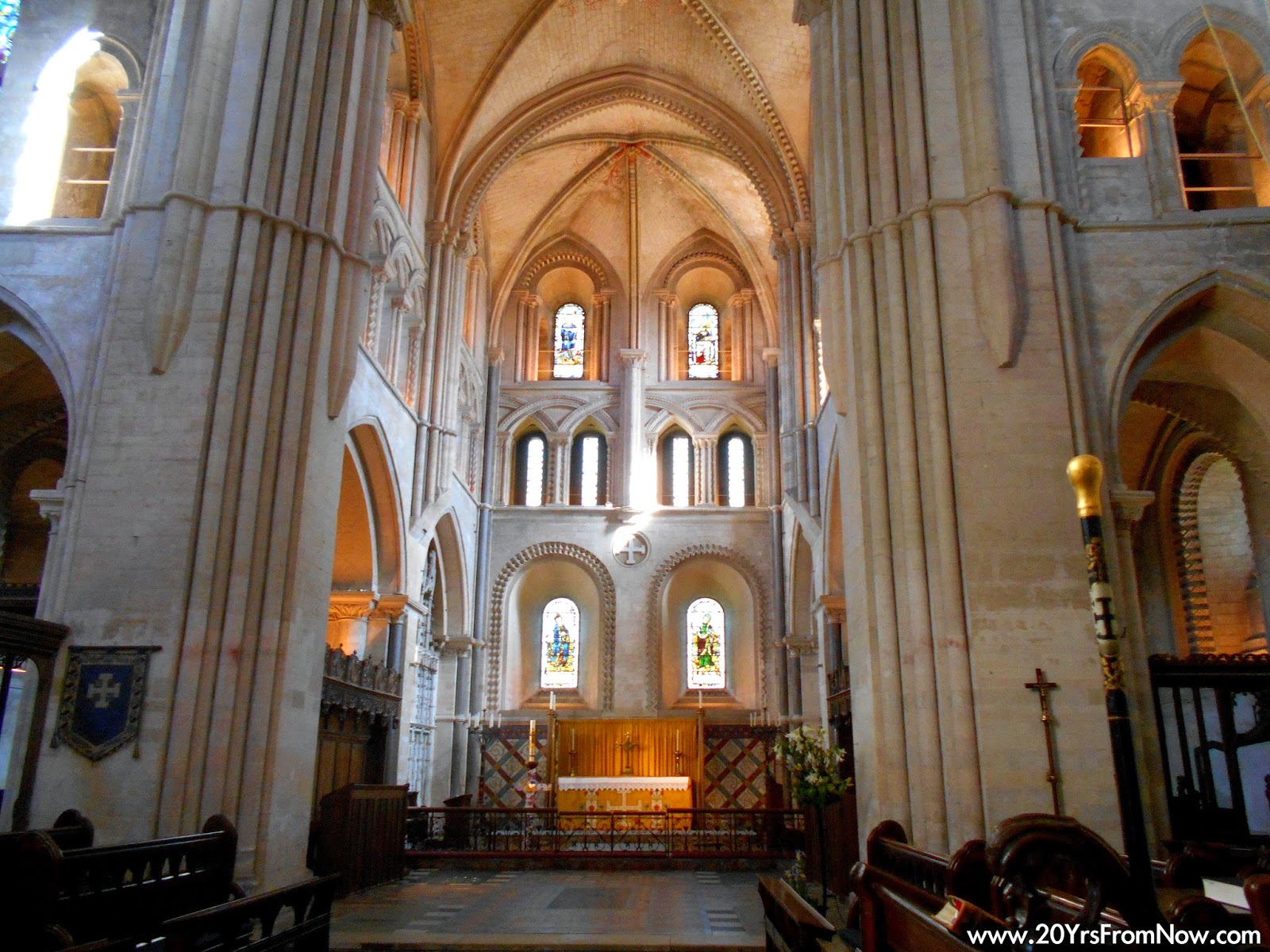 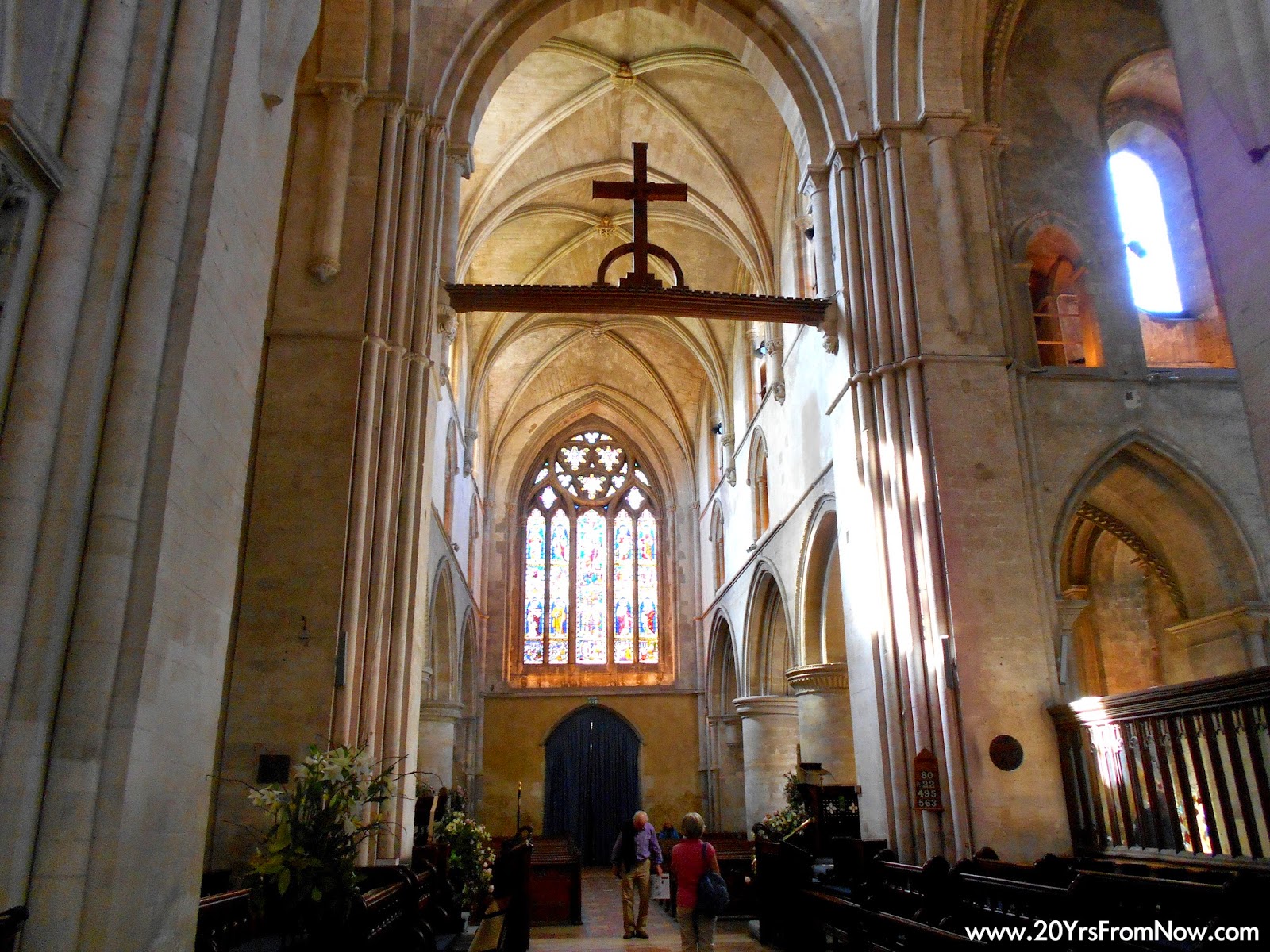 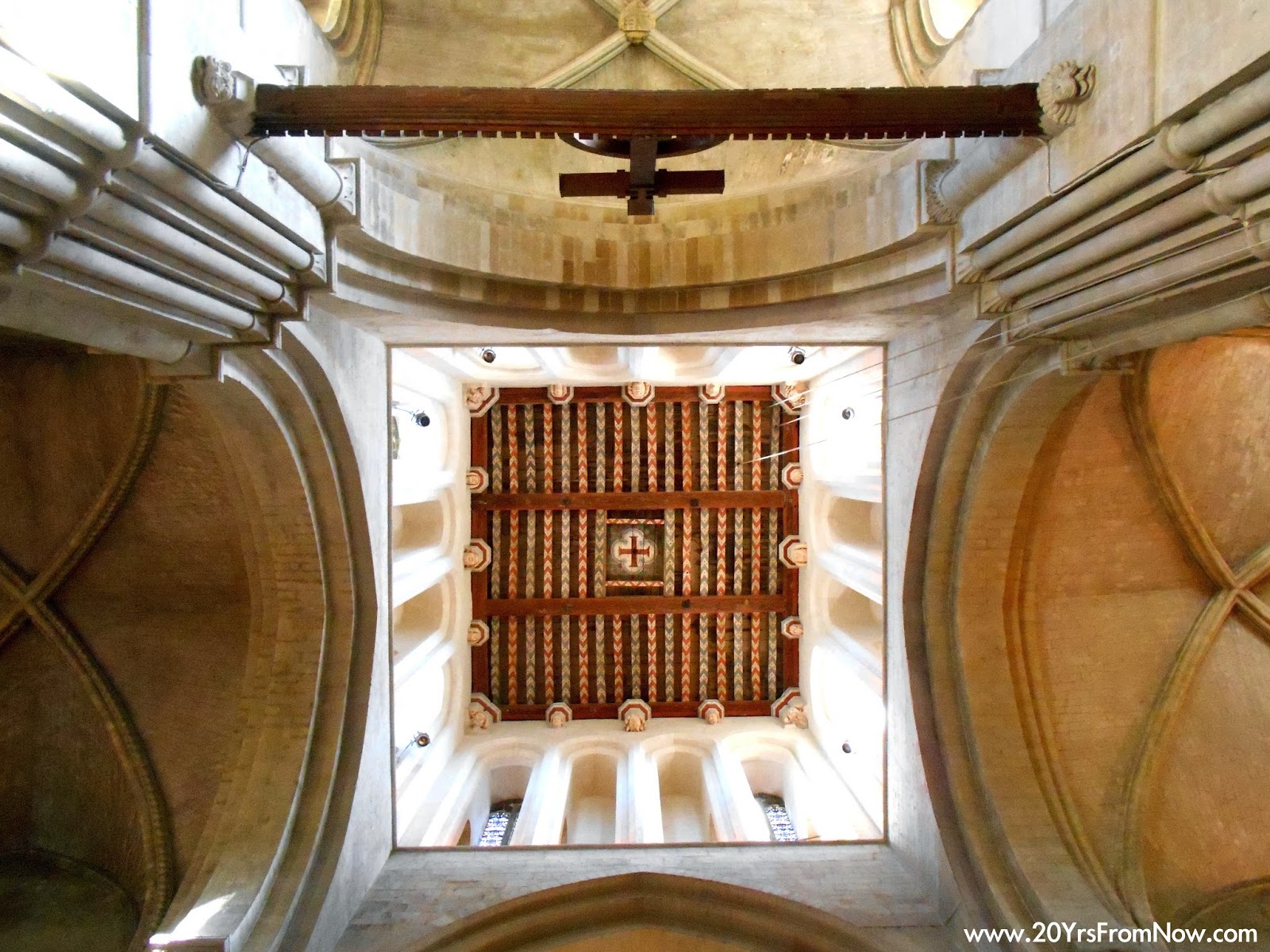 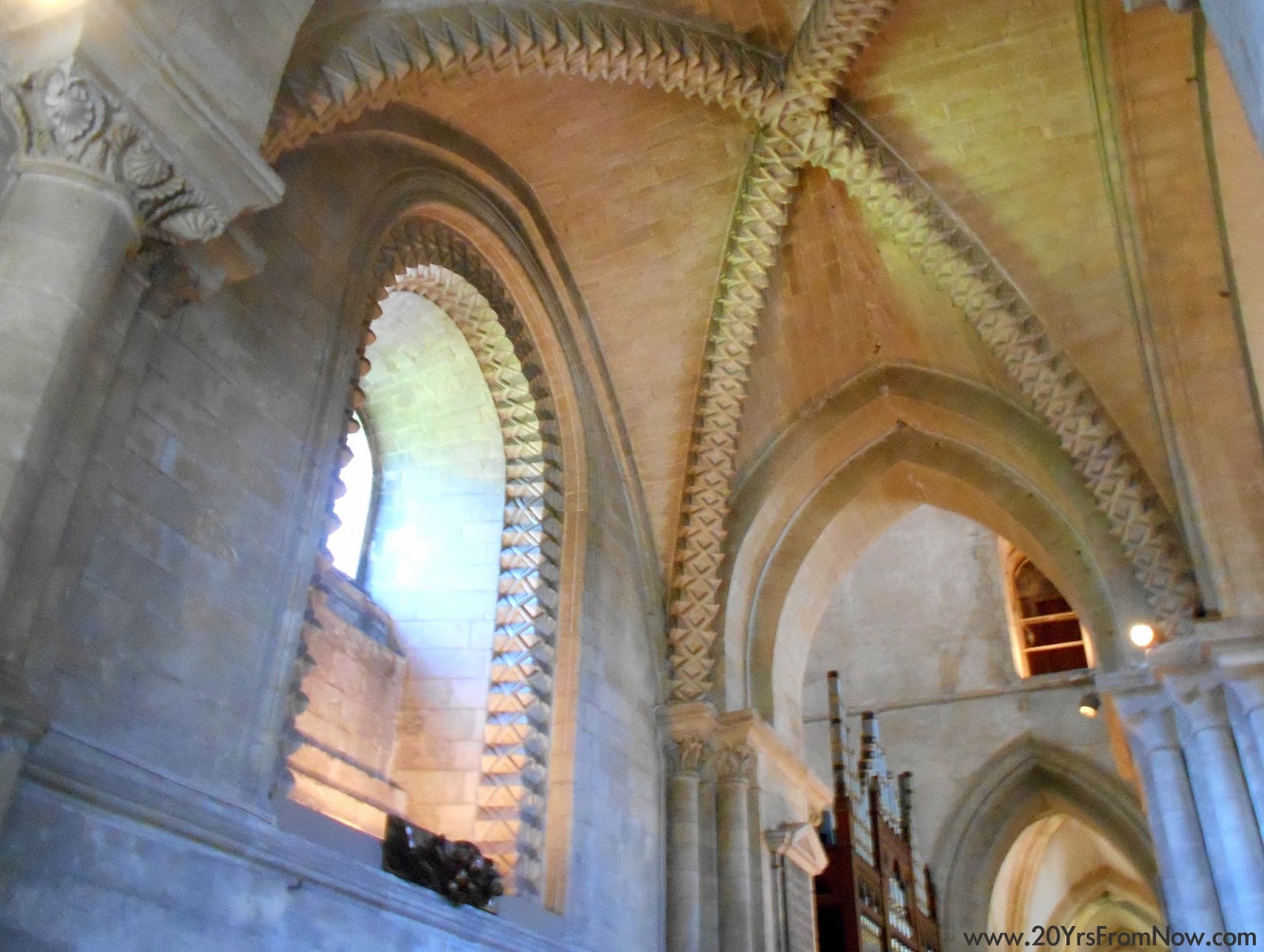 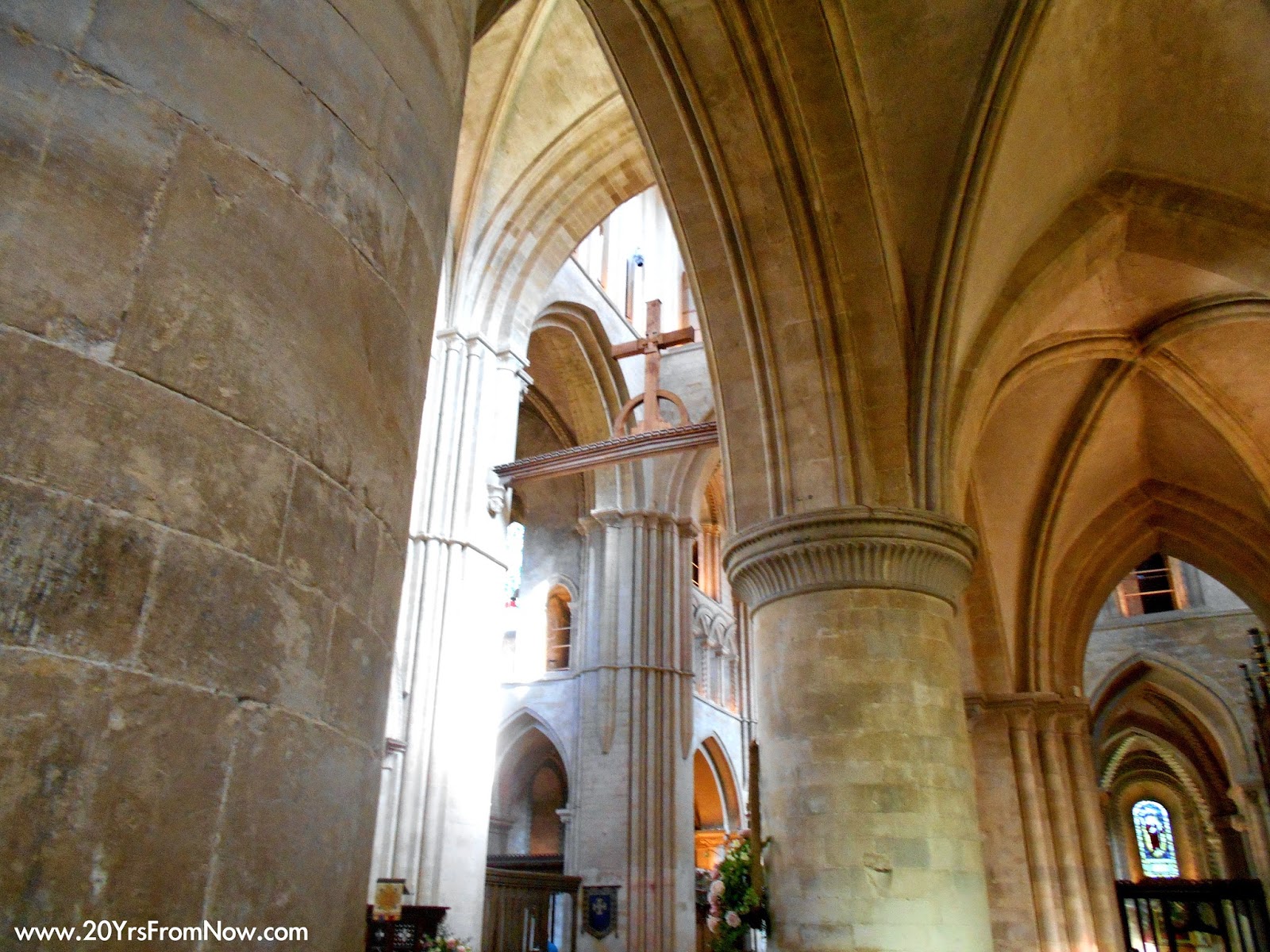 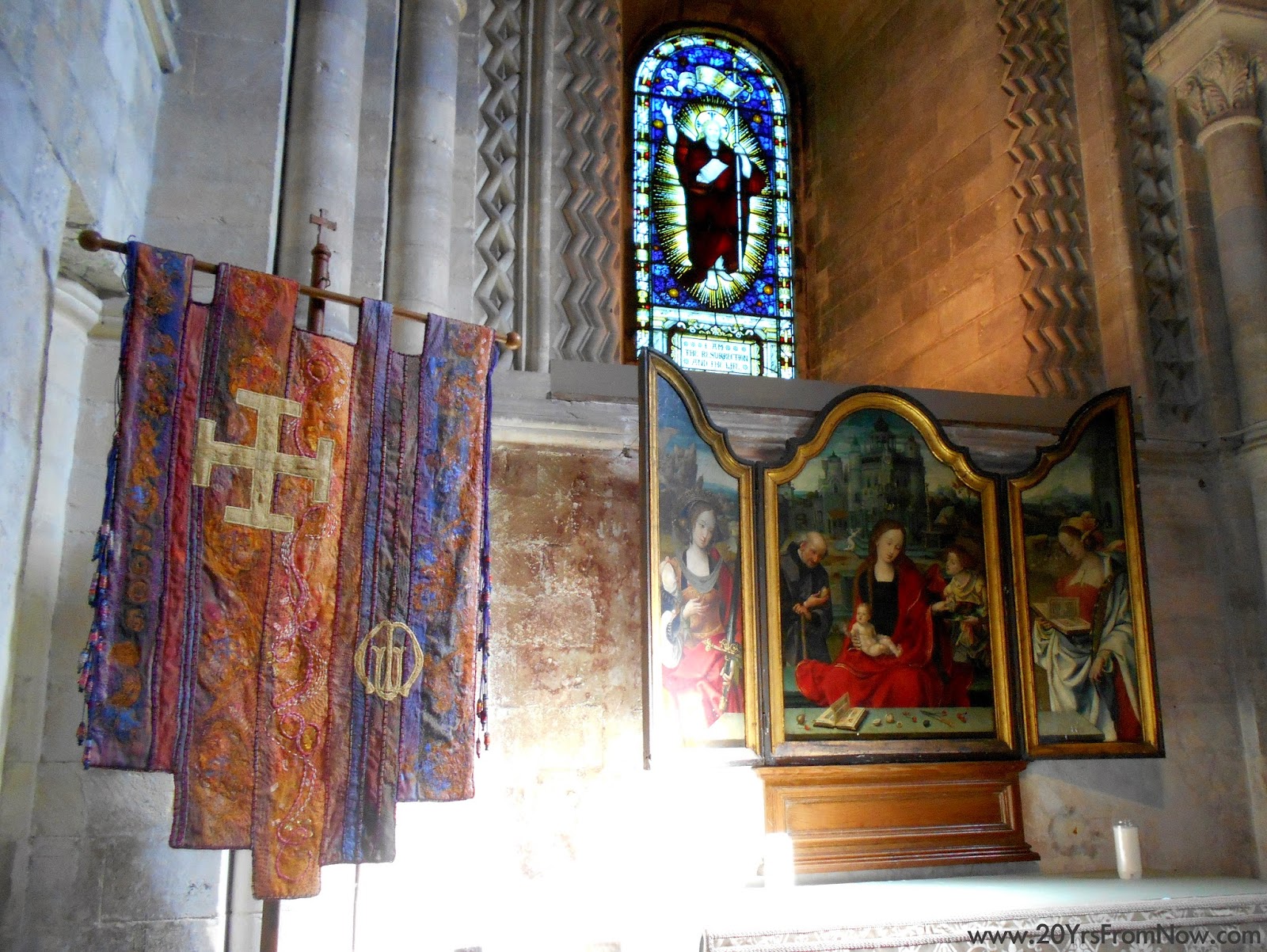 When the church was first built it would have been adorned with brightly coloured painted murals. Take a close look at the ceiling photos below. It's still possible to see part of those intricate designs. 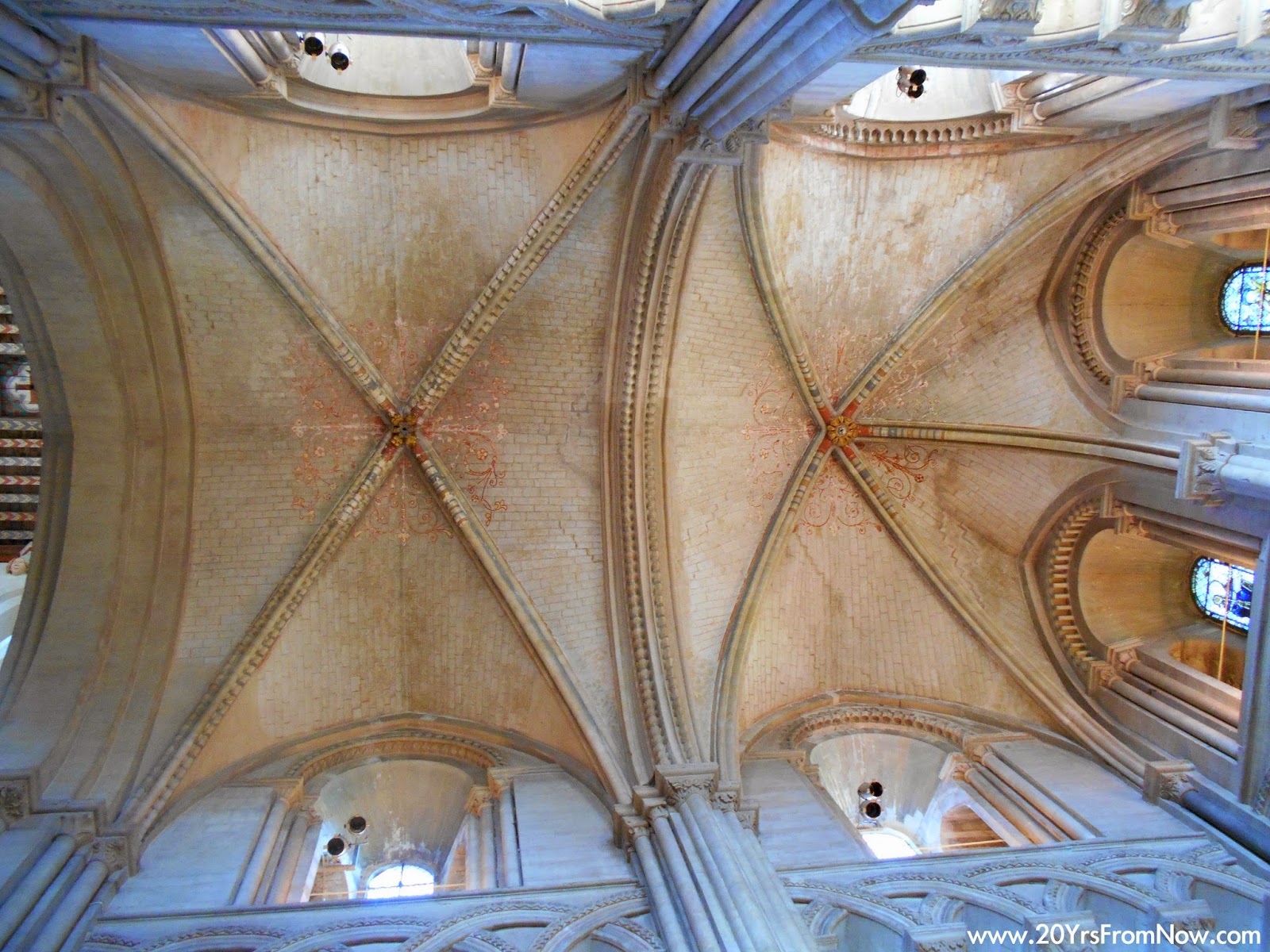 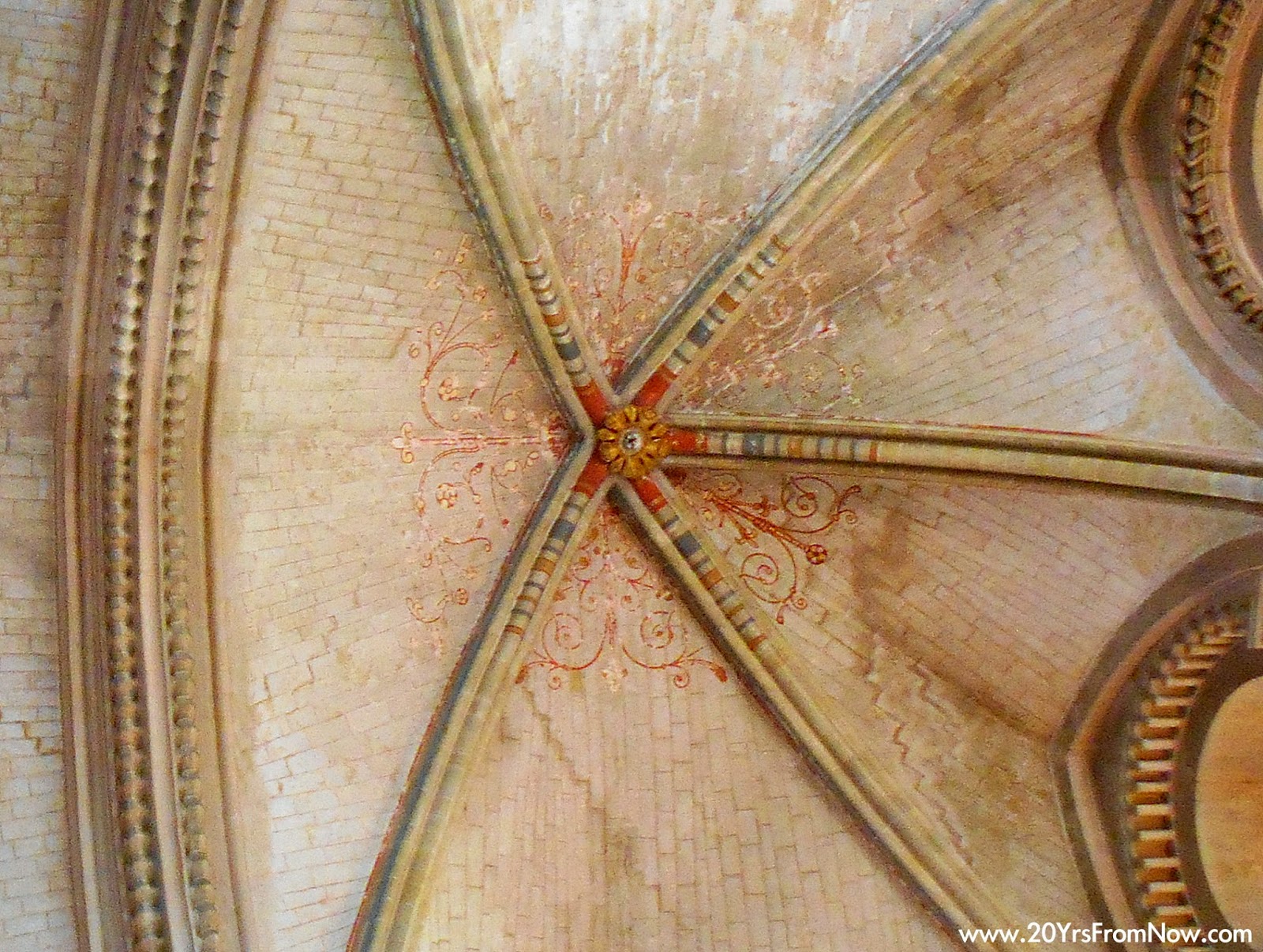 To add further to the appeal of this church we happened to visit when the organist was practicing.

The gardens were equally inviting and we took a few moments to sit on a bench and enjoy the moment. 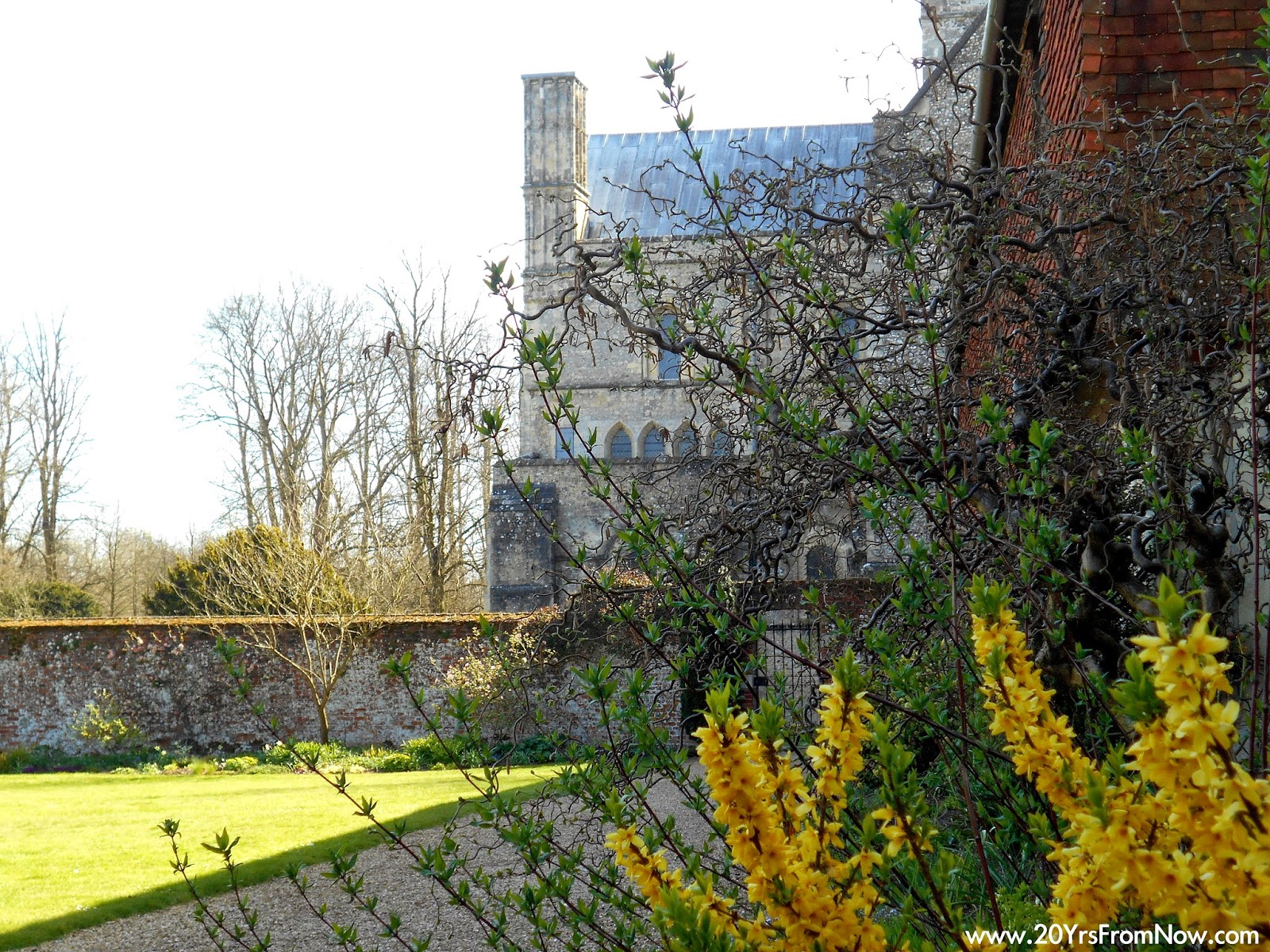 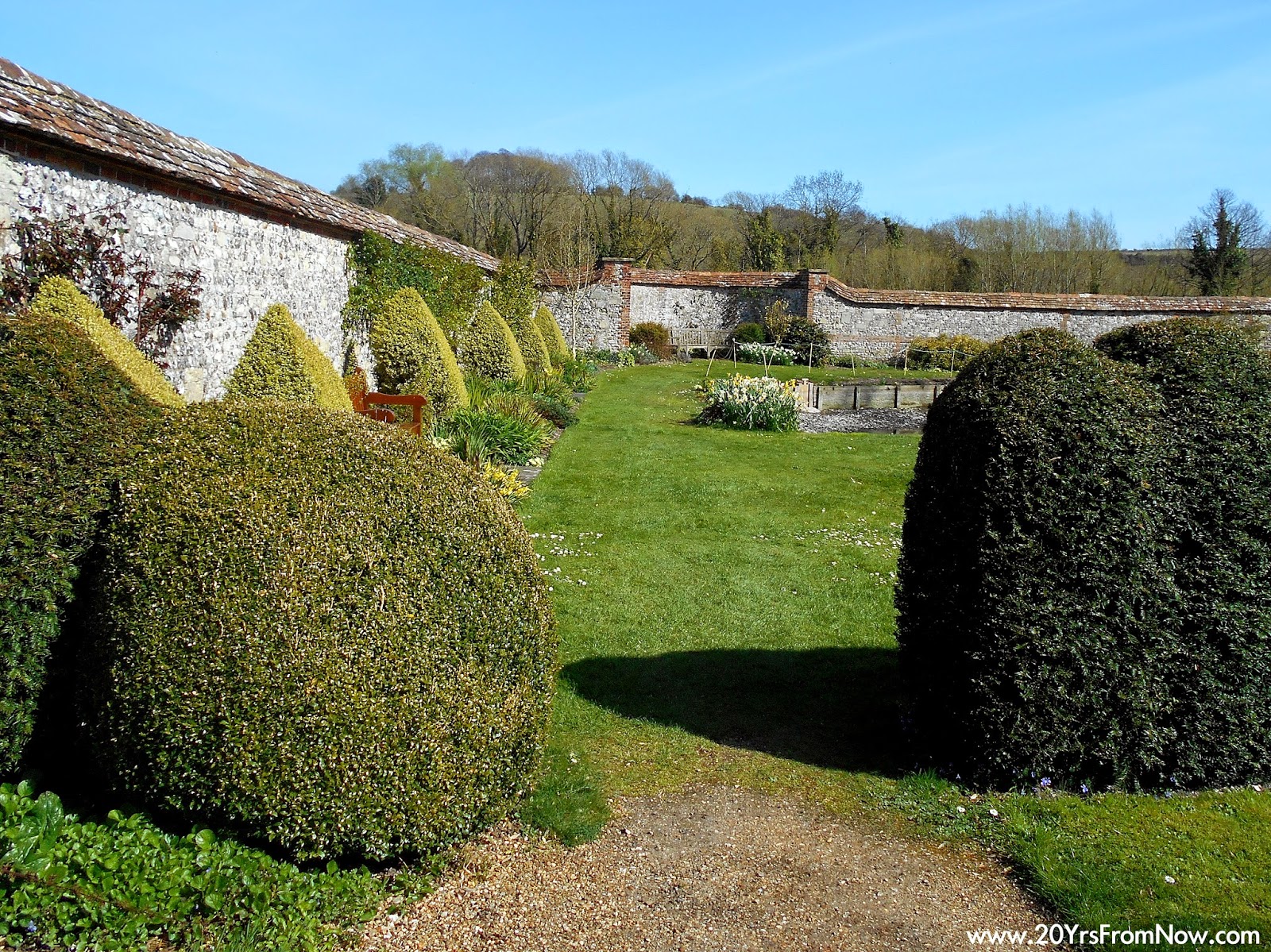 The Hospital of St. Cross is well worth a look while visiting Winchester. 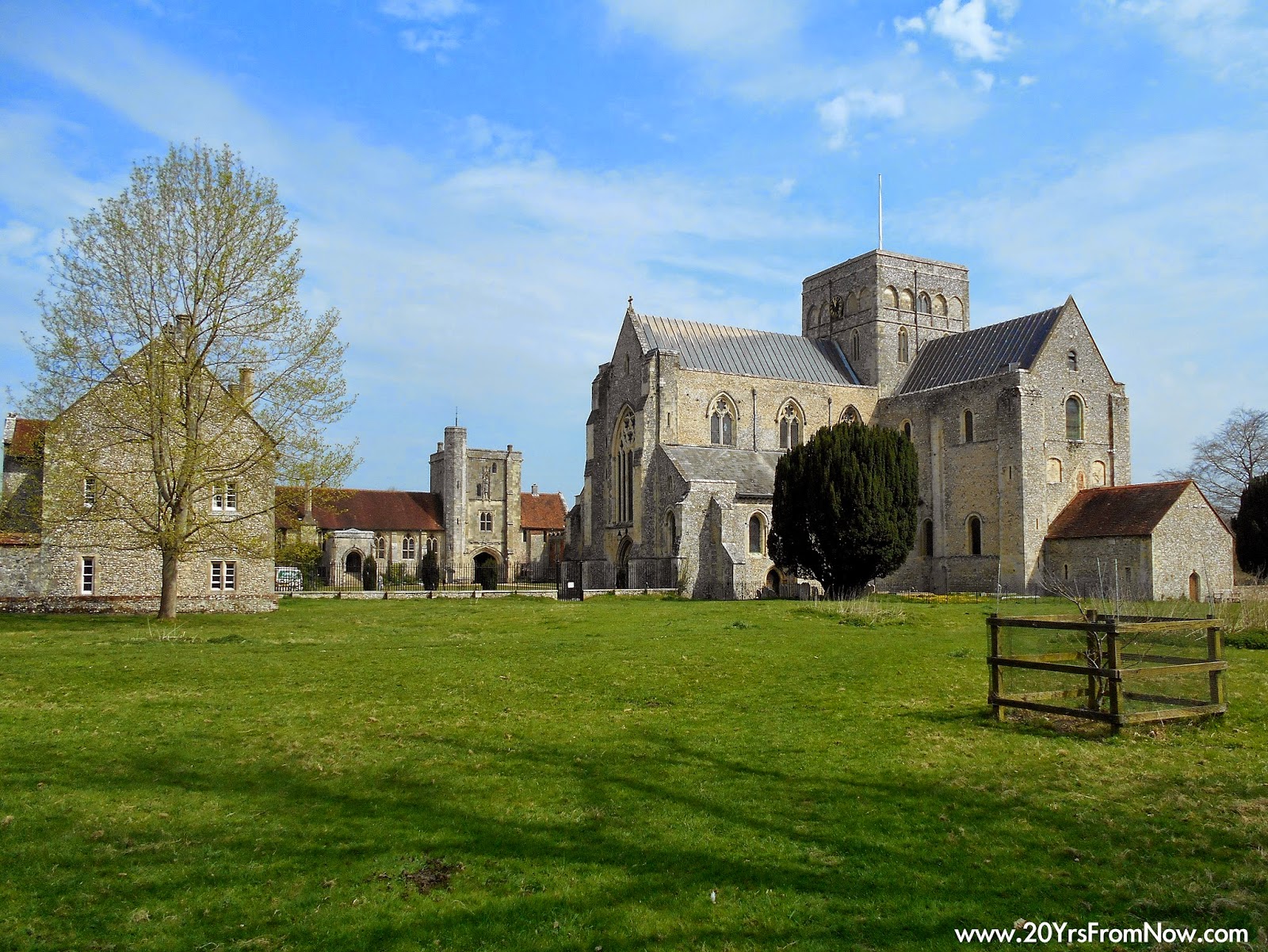 Just one friendly word of advice...remember to ask the porter for your Wayfarer's Dole.