Visiting Bath has been on our bucket list for ages, but for whatever reasons it was not until this month that we made it happen. After checking into the Premier Inn (fantastic location, btw) our first stop was the Roman Baths.  The entrance is impressive while the Christmas tree and street performer made it all the more festive. 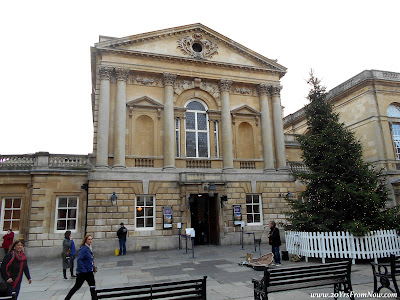 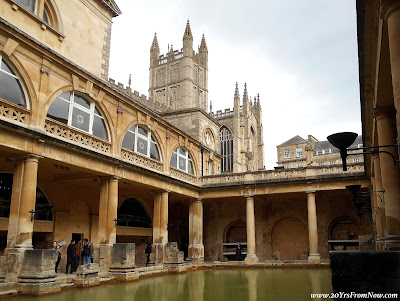 We spent about two hours at this museum, wandering through the various exhibits that begin inside and eventually deliver visitors to the various levels (including deep below street level) of this amazingly preserved Roman site. 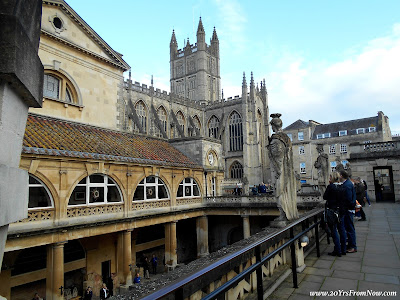 Volunteers donning Roman costumes made the trip back in time seem all the more authentic. Life expectancy, even for the privileged, was at the best mid-thirties and I found it interesting the head priest stationed here in Bath lived to the ripe old age of 76. Perhaps he had the best gig of all - certainly better than the emperor himself! 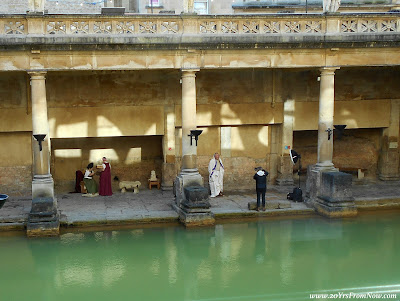 The hot springs still flow from the far right corner into the bath and was pleasingly warm to the touch - only we didn't realise we weren't supposed to test the waters until after we did so. Oops! Our bad. 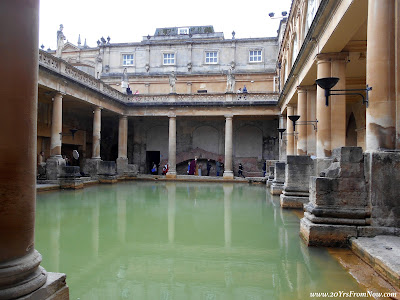 This is where the hot spring originates. The Romans did not bath in this next section as this room was for the Goddess' use only. During recent times, however, the water in the Sacred Spring was flooded (up to the brown line) so that Victorians could soak in its healthy benefits. Doctors of the time often prescribed drinking the water as well. Modern analysis of its contents prove it has an extremely high mineral count and visitors are encouraged to try it. We took a sip from the fountain for good measure and while it was slightly warm it had an agreeable taste. 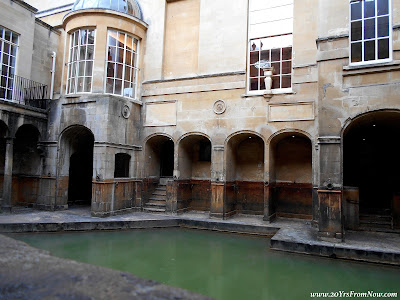 Bath Abbey is located next to the Roman Baths. 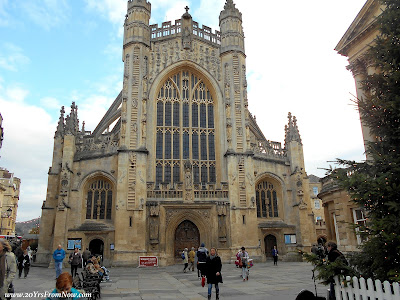 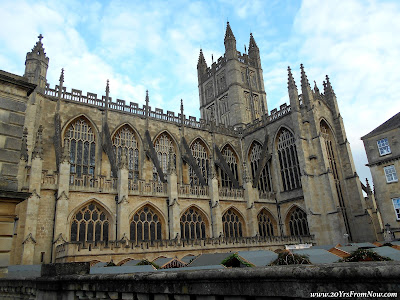 When we visited Bath the Christmas Market was in full swing and carollers serenaded shoppers at various times throughout the day. This school group was too sweet for words. They reminded me of when our daughter was in the St. Marys Children's Choir. 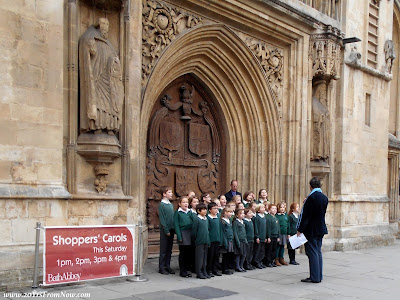 We were also fortunate to hear another school choir practicing inside the abbey. 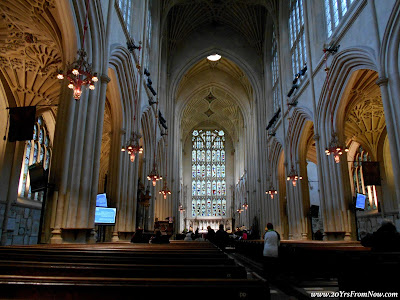 The sound of Christmas carols added to our exploration of this beautiful, ornate abbey. 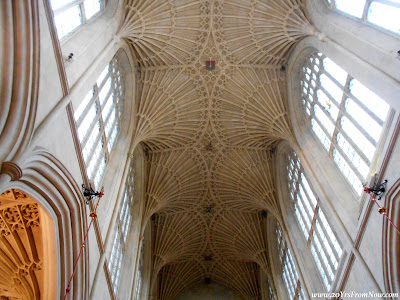 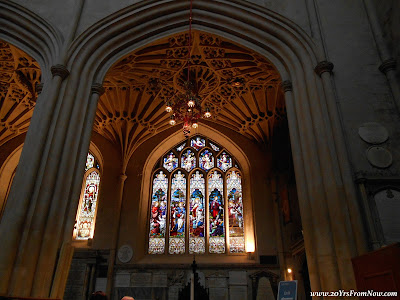 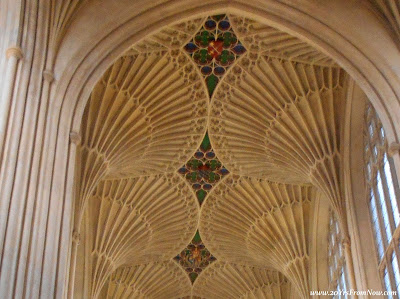 As it gets dark this time of year shortly after 4:00 PM we were able to get some lovely shots of the abbey and the Christmas Market at night. 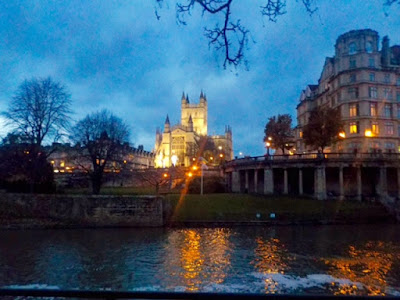 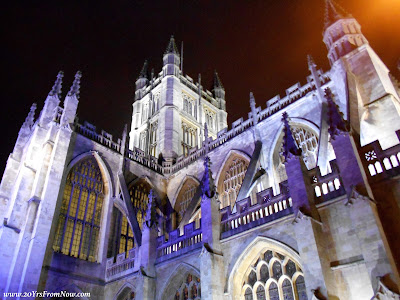 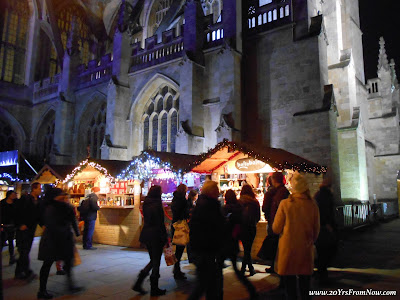 Our next stop was the Royal Crescent. 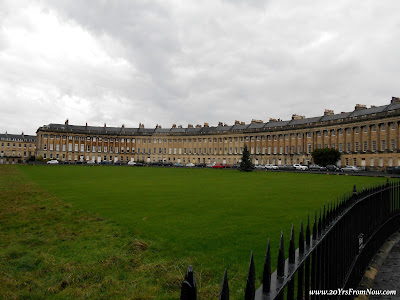 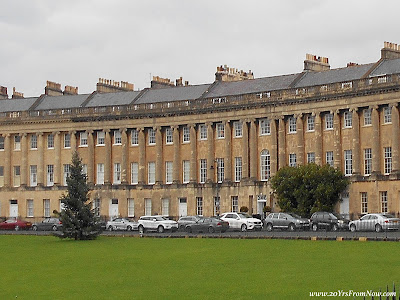 Built between 1767-74 by John Wood the Younger this crescent of thirty stone houses is in the Palladian design. What's interesting is these were intended to be rental holiday homes rather than permanent abodes. One man, however, Henry Sandford, loved it so much he rented Number 1 (shown below) from 1776 until his death in 1796. 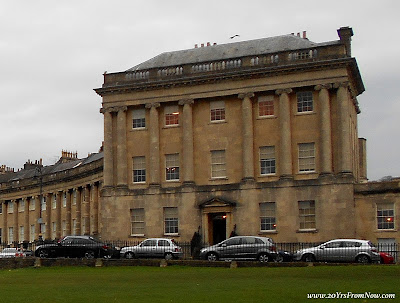 It is now a museum and once again we learned a few interesting tidbits about the Georgian way of life. I was rather envious of this group of school children. Not only did they get to visit the museum, but they donned period costumes during their visit. Although it wasn't all fun and games as I overheard one little girl complain about how difficult it was to climb the stairs in a long dress. ;-) 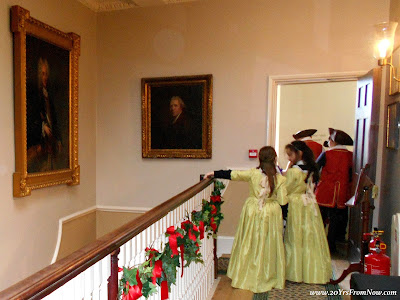 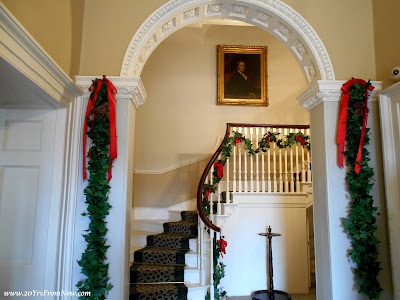 Each room is decorated as it may have been during the period when Henry Sandford lived here. 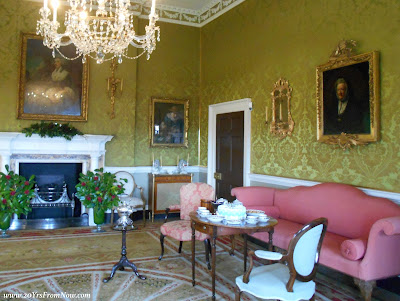 The kitchen is in the basement. The low, curved ceiling illustrates this was not designed to impress, but was solely functional and reserved for the staff. 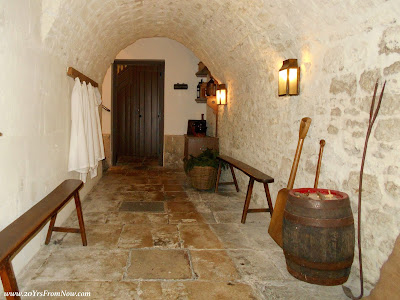 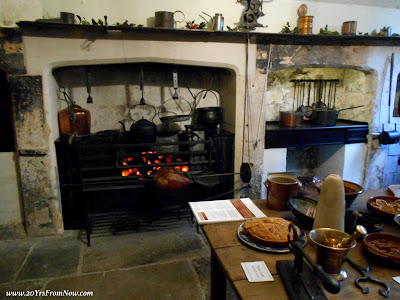 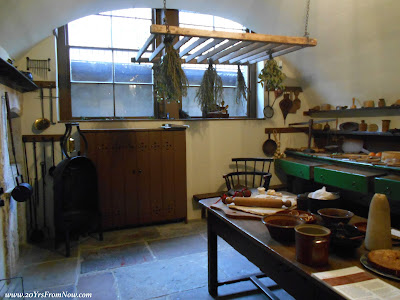 Some of those interesting tidbits I mentioned earlier included the absence of a bath room in the house. Often a chamber pot would be concealed somewhere in a room - such as the sideboards in the dining room where the dishes would also be stored. (Yuck.) Make up for woman of this era was quite lethal. Ingredients were lead based and often included horse manure. (Double Yuck.) The combination often caused loss of hair. 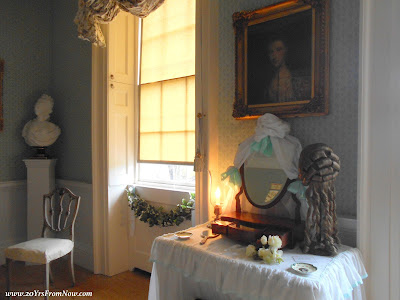 For this reason many wore wigs (that were lice infested) while others glued narrow strips of mouse fur on their face as eye brows. And there was no shortage of mice as there were dozens of traps in the kitchen to catch the little rodents. Plus, bathing was frowned upon and viewed as dangerous to one's health. Life in the Georgian times was not quite as glamorous as books and movies suggest.

Modern day Bath, however, is a delight. We spotted this group of visitors touring the city in a horse drawn carriage. 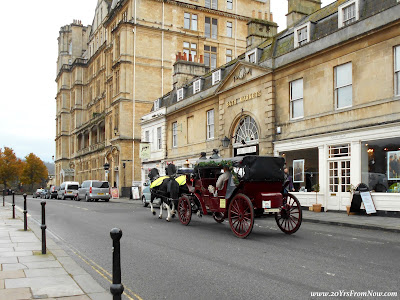 Just to the left of the carriage is the river. What a view! 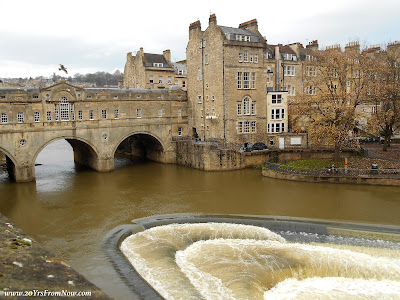 No visit to Bath, however, would be complete without a pub. We found the Coeur de Lion down a small alleyway. It is dubbed as Bath's smallest pub and dates back to 1749. While it is tiny we managed to grab an upstairs table and enjoyed a delicious, tasty lunch. 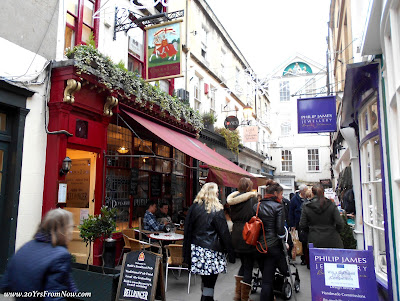 The mineral content of the Bath spa may have its heath merits, but we prefer a Guinness! Cheers!