Shrewsbury is a short train ride from Chester and as it's also the birthplace of Charles Darwin John insisted we pay it a visit.  It's a smaller community than most of the towns or cities we've toured, making it easily walkable and in our opinion a quaint, welcoming, hidden gem. 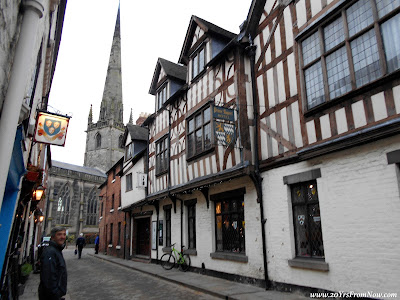 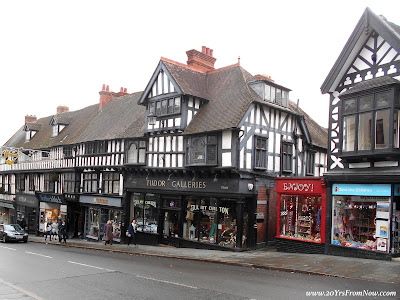 Some of the buildings are incredibly old. The lean on this next building caught John's attention. 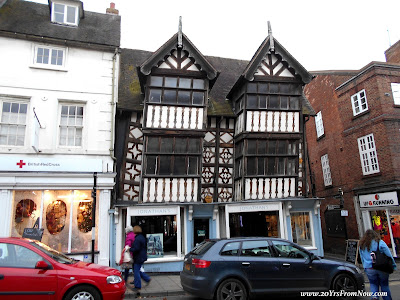 The lines on this one are a little straighter, but still quite rustic. Costa, btw, is the UK equivalent of Tim Horton's. 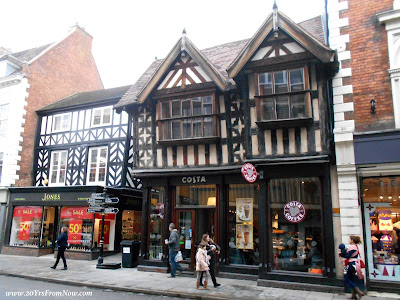 What's deceiving about Shrewsbury's high street is that beyond the giant reindeer is entrance to a modern shopping centre that seems to go on forever. 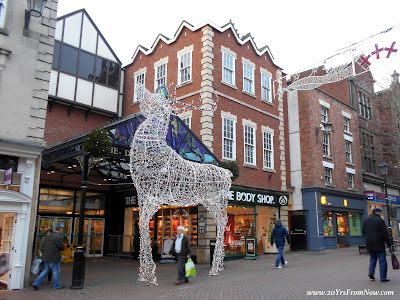 If smaller shops are your preference there are plenty of those as well. This one in particular was a visual delight. 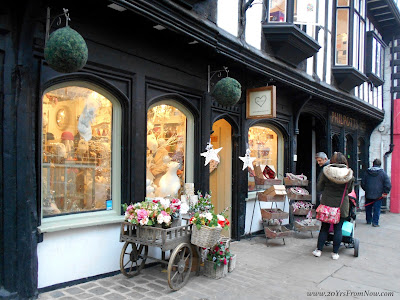 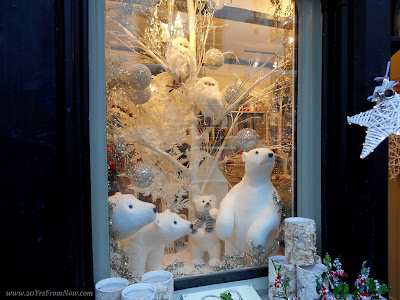 Shrewsbury's consumer tradition dates back centuries and the old market hall was built in 1596. 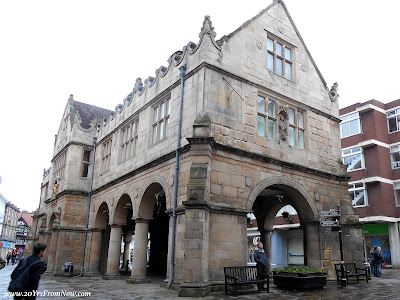 The Shrewsbury Castle now houses a museum and is a venue for weddings and special occasions. The grounds and gardens are spectacular and provide ample photo opportunities. 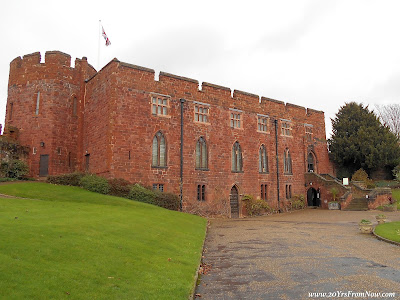 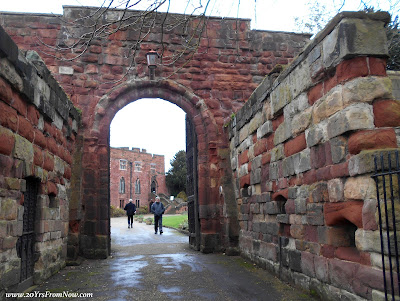 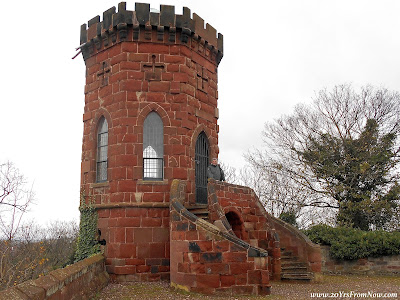 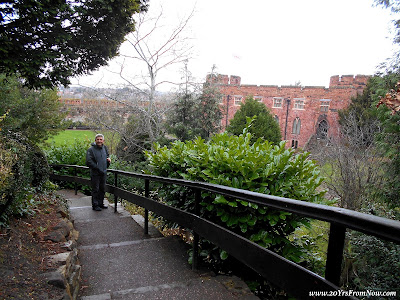 Just outside of the castle walls is this lovely tudor building. 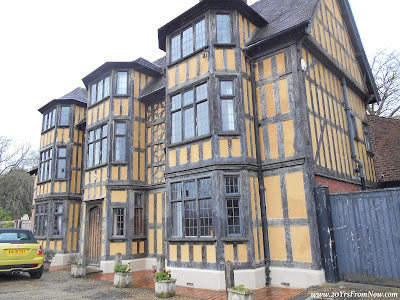 It goes without saying that we'd visit Shrewsbury Cathedral. What set it apart from others we've visited is its wooden ceiling. So many have either been destroyed by fire or simply deteriorated over time and it was a joy to see one still intact. 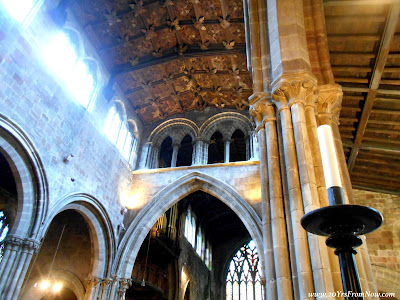 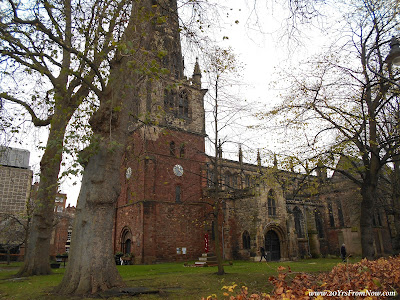 Sunday morning it rained on and off, but we went for a walk along the river. Signs of flooding were evident, but the level of water was not nearly as severe as the destruction that hit communities further north. 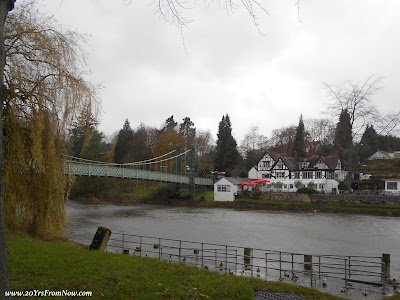 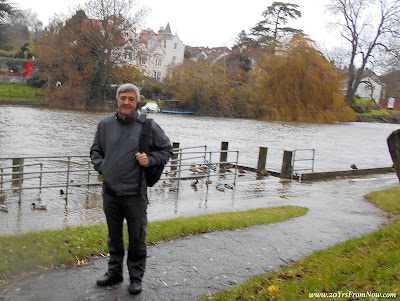 Another famous citizen of Shrewsbury is Michael Palin. Both he and Darwin attended the school atop the hill. 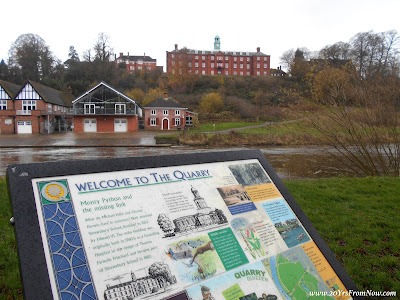 The highlight, of course, is Shrewsbury's connection to Charles Darwin. He was born in 1809 and lived here until the age of 27. The statue outside of the library (shown below) seemed a perfect photo op except for the paper party hat some cheeky beggar placed on top Darwin's head! 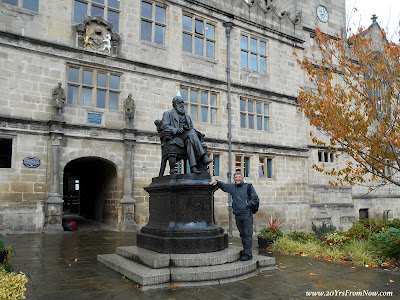 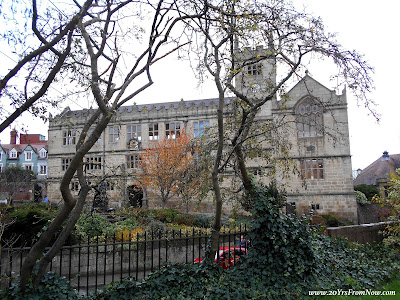 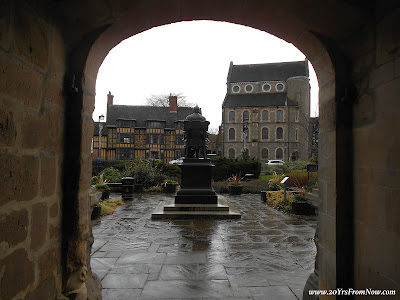 The library is a wonderful combination of modern and old - beams alongside computers! 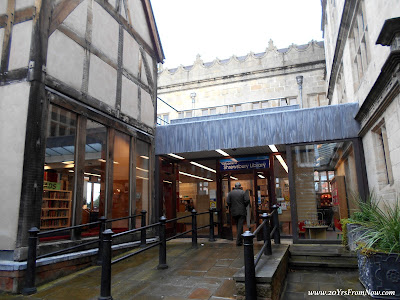 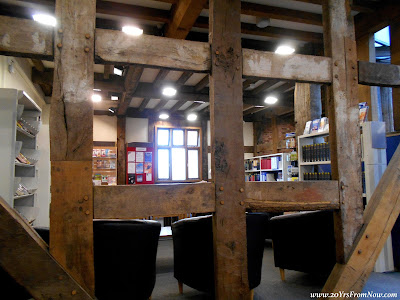 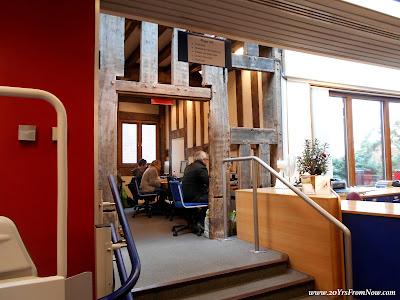 Shrewsbury also has its fair share of pubs.  We had a lovely lunch at the Three Fishes. 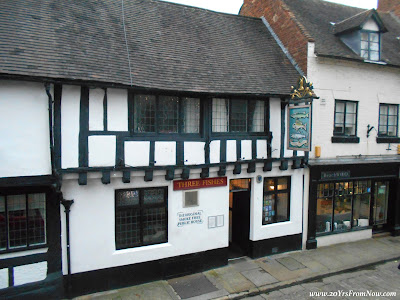 This pub (sorry I don't recall the name) is actually located in the lower level of this building and tables and patrons are open to the elements. It would be wonderful in warmer weather, but we wanted a cosier atmosphere. 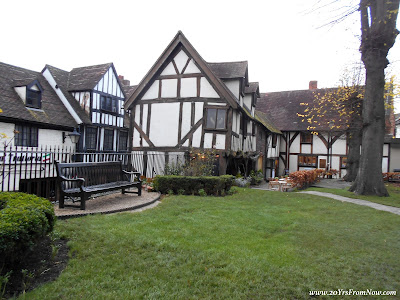 We found it in The Dun Cow (Brown Cow) where we enjoyed a Guinness and delicious Sunday Roast. 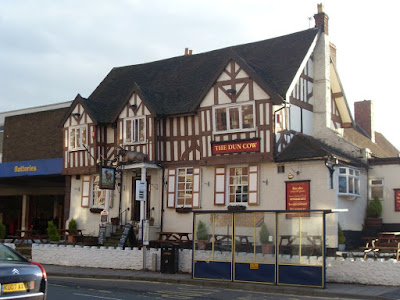 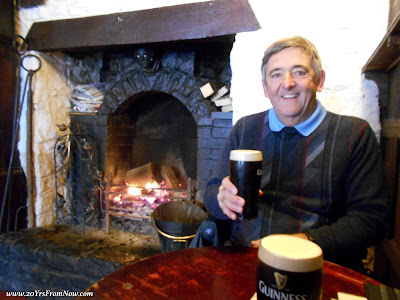 Some pubs do not serve food and while we tend to avoid them the locals of The Loggerheads gave us such a warm welcome that we decided to stay and have a pint. We met two retired men both of whom had traveled the world and shared their fascinating stories while we drank our Guinness. 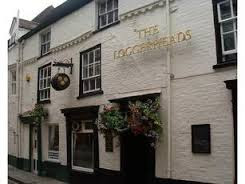 Outside is a sign advertising The Loggerheads as a Hubby Day Care. It reads: "Hubby Day Care. Is he slowing you down? Is he getting on your nerves? Why not leave him here? Just pay for his drinks and we'll look after him! Shop in peace." 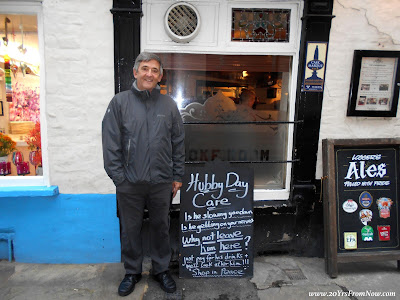