Our first stop after leaving Cahersiveeen was Waterville on the west coast of Inveragh peninsula. 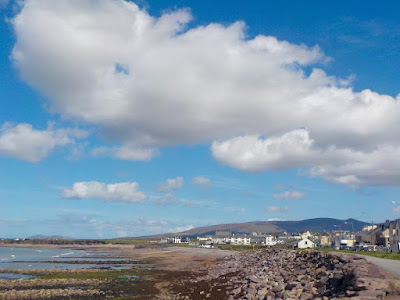 Well, to be more precise, I spotted the Waterville Craft Market and convinced John to pull over. 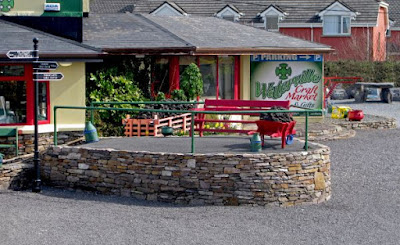 While I wandered inside the shop John checked out the Heritage Gallery to the right of the car park. There, among other things, he learned that in 1884 the Commercial Cable Company laid two cables across the Atlantic connecting Canada, Britain and France all via a station in Waterville. 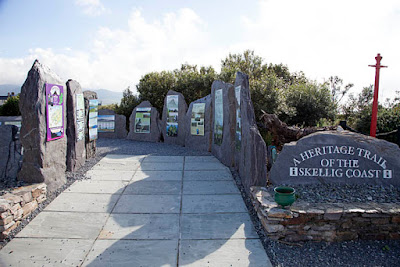 The craft shop proper offered everything Irish and featured an entire room dedicated to Star Wars.  A few scenes of The Force Awakens was filmed on nearby Skellig Michael island and in May the cast and crew returned to County Kerry to film Episode VIII that will be released this coming December. While the publicity will be a boon for tourism we have to wonder if the narrow roads and sparse population are ready for the lightsaber wielding hordes that will soon arrive by the coach load. May the force be with them! 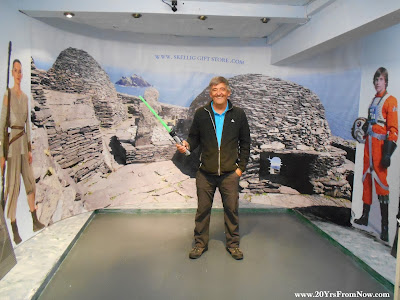 Leaving Waterville we stopped to admire the incredible view of where we'd just been. 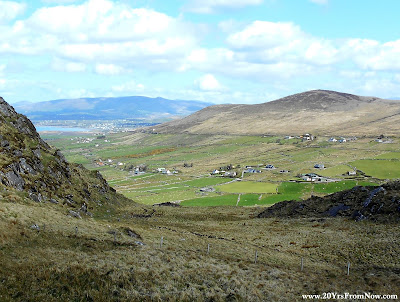 We stopped once again to wander around the picturesque village of Sneem. A number of tourist buses came and went while we strolled around town and talked to a few of the locals. 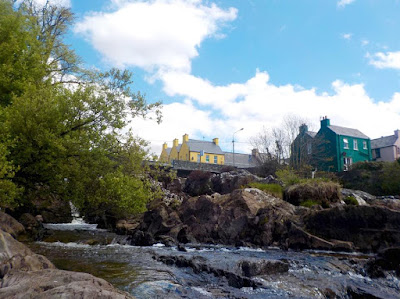 Besides admiring the colours of the various buildings we noticed a butcher shop owned by a K. Burns. What's a Scotsman doing in Ireland?! 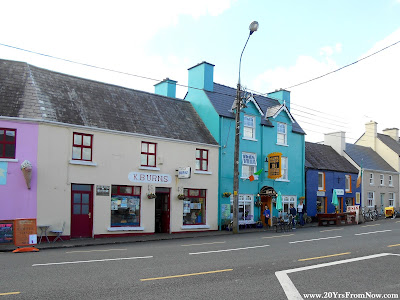 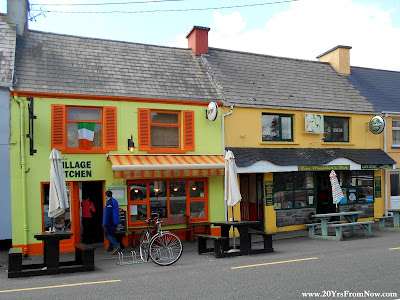 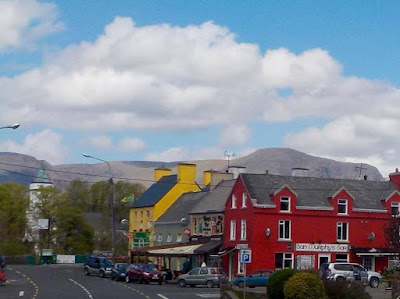 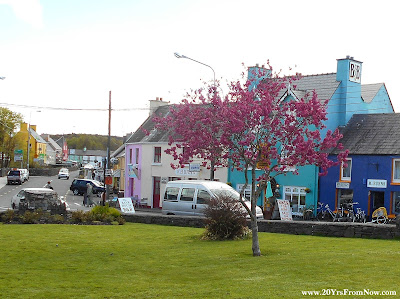 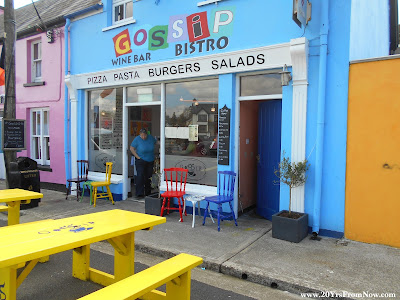 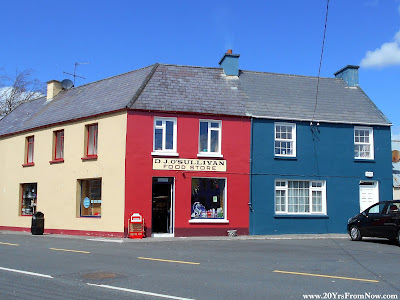 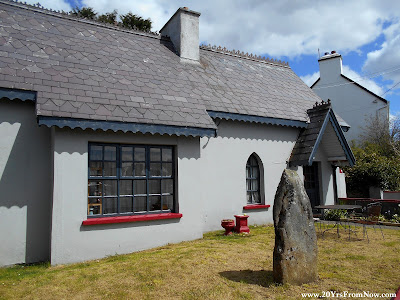 Naturally, we timed it right that a stop at a pub was in order and John chose the Blue Bull. An excellent choice, btw. He had fish and chips and I had the lamb stew - both served with a pint of Guinness. 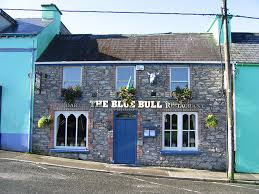 During our two peninsula tour we stayed at the River Meadows B&B. It's off the Sneem Road west of Kenmare on the Inveragh peninsula and an absolute find. Lovely host and hostess, comfortable room and delicious Irish breakfast.

The next day we did a circle tour of the Beara Peninsula. The first word that popped into my head when we arrived in Allihies on the west coast was 'remote' and yet there is a rugged beauty to this place that seemed to lull one in. 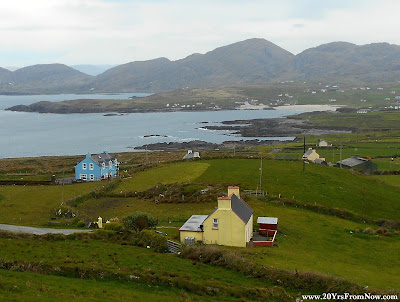 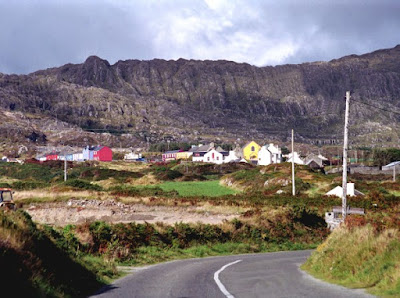 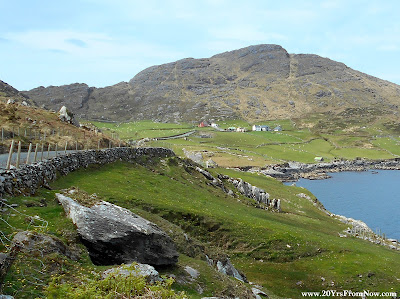 We followed along the paved road above until we got to the red farmhouse. When the road narrowed we both wondered how on earth we'd gotten off the main road and onto someone's drive. As it turned out the road made a sharp left turn past the corner of the brick house and the white barn, then continued on up the mountain. 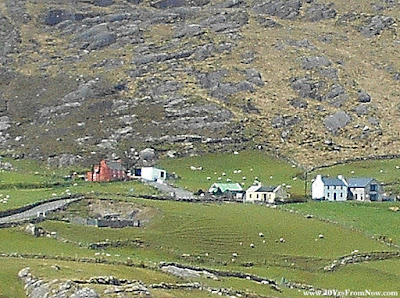 Rather than go up and over the barren rock we often went under. This particular passage involved two  side-by-side tunnels. 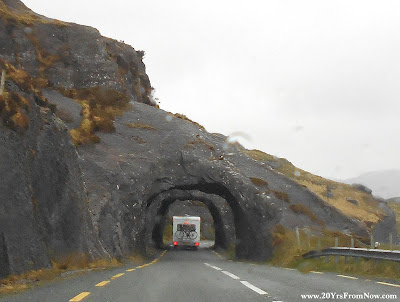 It began to drizzle and when we came across Molly Gallivan's Cottage and Traditional Restaurant we decided to stop and take a look. It appears deceivingly small, but there are a number of rooms built onto the back that offer everything from clothing to art work and jewellery. 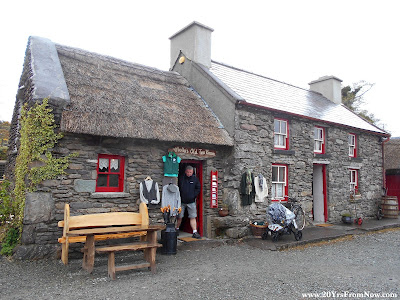 The shop also offered meals and we decided on a cup of tea and shared a scone. Lovely. As was the 'traditional' candle lighting. 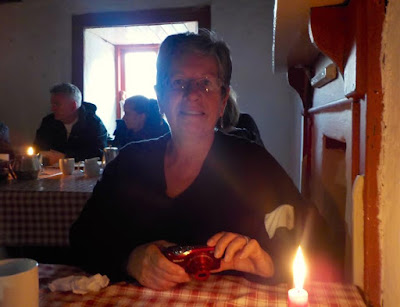