Cordoba's Alcazar de los Reyes Cristianos or Castle of the Christian Monarchs is a short walk from the Mezquita-Cathedral. 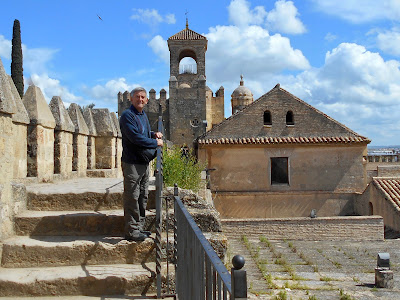 From the sombre exterior (viewed on the right below) it is impossible to tell what lies within, but most tourists (myself included) are far more interested in taking a photo of the Andalusian horse and trainer. 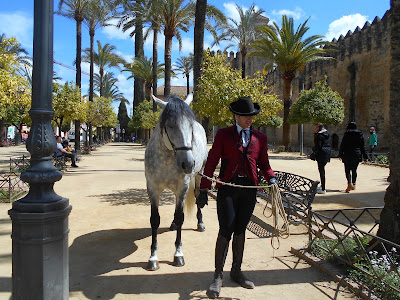 Construction on the palace began in 1328 and for eight years this fortress was one of the primary residences of Queen Isabella I of Castile and King Ferdinand II of Aragon. During this time in Cordoba they defeated the Moors and kicked them out of Granada and they also funded Christopher Columbus' voyage to America when he visited them here in Cordoba. Given the importance of that decision it seems fitting all three should be remembered and revered in the gardens.

Entrance into the palace is via the Inquisition Tower (below). After Isabelle and Ferdinand defeated the Moors at Granada they insisted all Jews and Muslims leave the area OR convert to Catholicism.  Next, they gave the Alcazar to the Church and it was here in 1478 one of the first permanent tribunals of the Spanish Inquisition was established. Its purpose was to insure those Jews and Muslims who remained on Spanish soil were indeed practicing Catholics. One surprising fact I learned while researching this post - the Inquisition was not 'definitively' abolished until 1834. OMG. 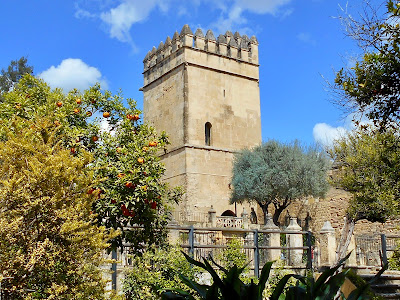 The carved coat of arms just inside the Inquisition Tower measures about three feet in height. 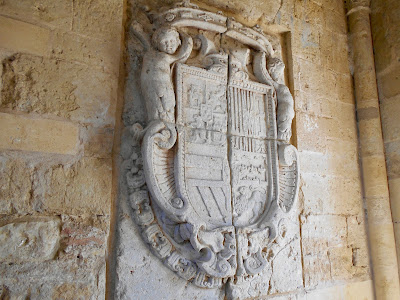 The Hall of Mosaics is next to the Alcazar's north wall (shown above in the first photo) and accessed below this corner tower. 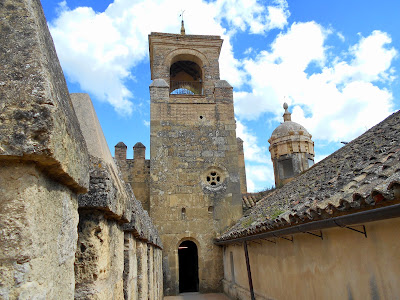 The Hall of Mosaics was originally constructed to be the Inquisition Chapel, but renovated in the 17th century and after 1820 served as a prison. 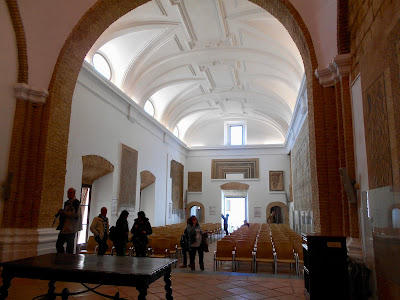 Today it is used by the Cordoba town council for official public events and civil marriages. 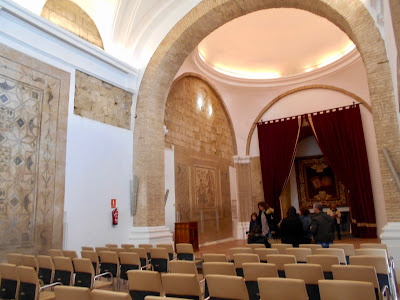 The 2nd and 3rd century Roman mosaics displayed here were discovered during construction work on Corredera Square which is about a 15-20 minute walk not far from the Palace of Viana home of twelve amazing courtyards featured in our last post. 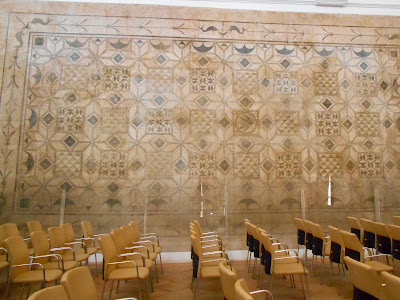 Little did we know during our walk to the Palace of Viana that we were within metres of where these beautiful mosaics were unearthed. 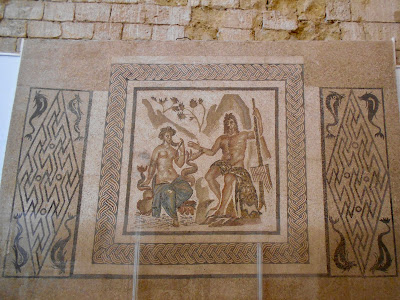 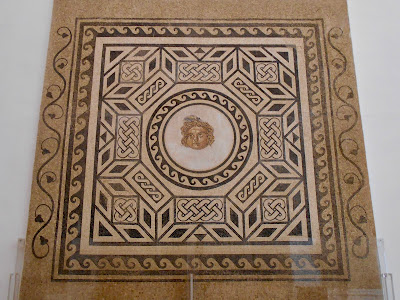 Next stop inside the Alcazar is the top of the Inquisition Tower. 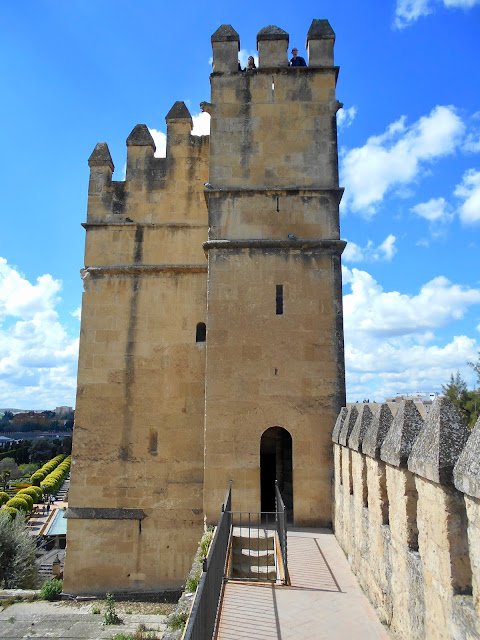 The views of the city are lovely, but I must confess I did not venture up there myself. John, however, did and took these wonderful photos. If you look carefully you'll see me on the wall walkway below. 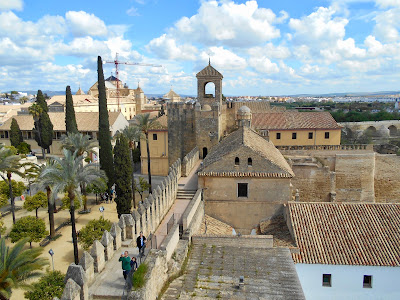 Facing the other direction atop the tower John captured the Royal Stables. In 1570 King Philip II ordered the stables to be built on land belonging to the Alcazar. His goal was to create a Spanish horse from the Arab original and the result is the Andalusian. 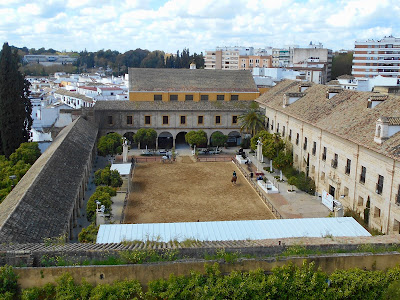 Just south of the royal stables are the gardens and I have no doubt they are magnificent at any time of the year. 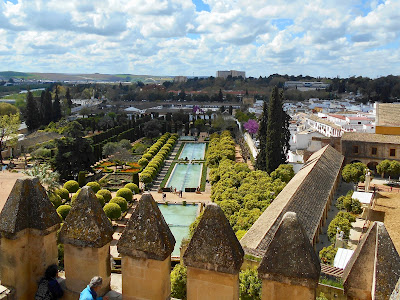 The aroma of blossoms combined with bird songs and the subtle ambiance of cascading water soothes the soul. 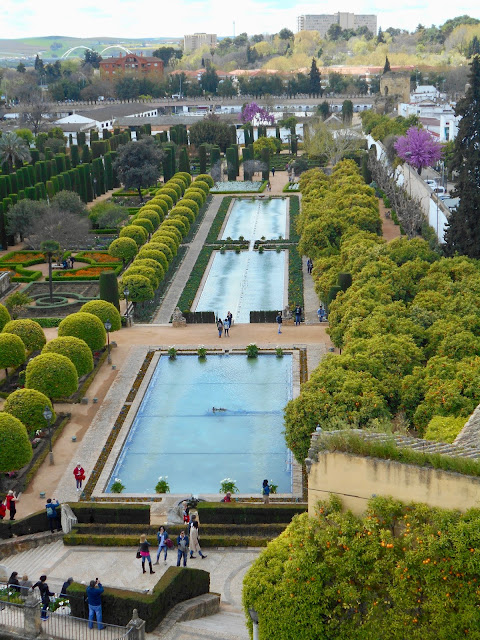 There is always space to just relax and cherish the beauty of this place. 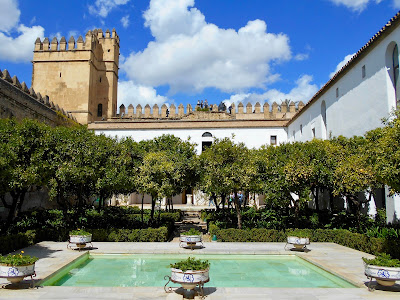 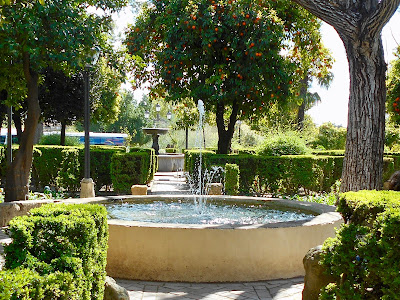 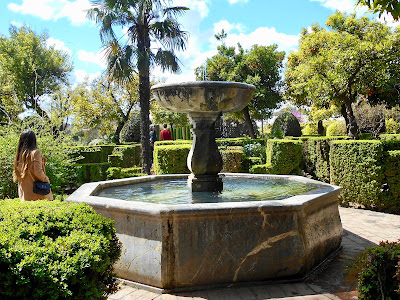 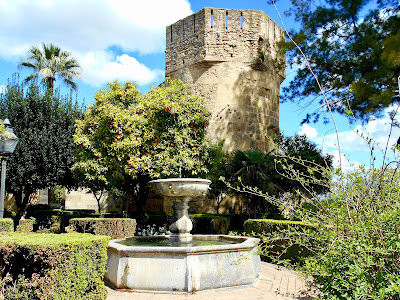 Looking back toward the Alcazar. 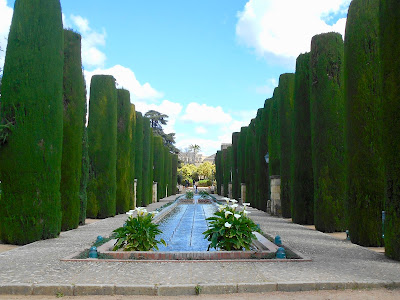 In the opposite direction are more statues of important Spaniards. 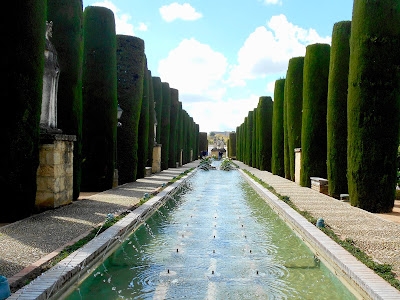 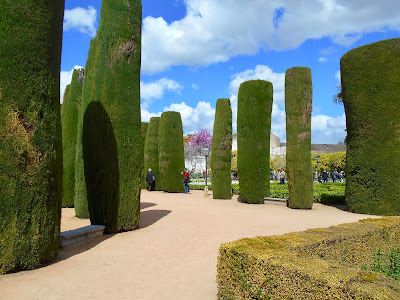 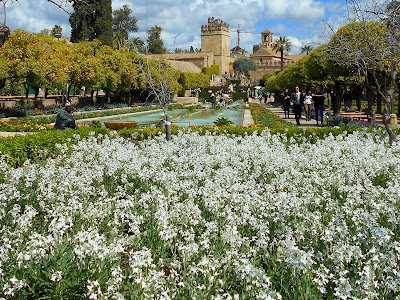 It's always a treat to be able to walk in the footsteps of kings, queens, movers and shakers and the Alcazar de los Reyes Cristianos allows all that and more.