The Marc Chagall Museum is a short walk from our port-side housesit in Nice, France. Dedicated to this Russian born Jewish artist, it was a must see while we were in the city. 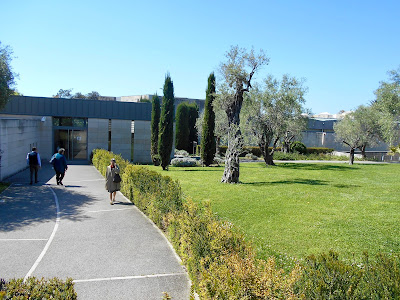 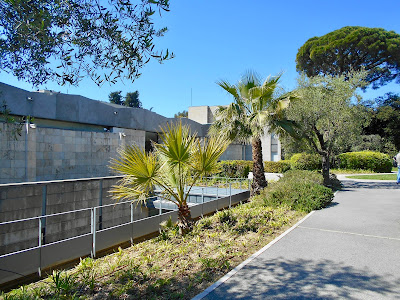 Marc Chagall was born in Belarus in 1887, the eldest of nine children. His life coincided with three major events - WWI, the 1917 Russian Revolution and WWII. During these upheavals he moved his family from place to place first within Russian then to Germany, the USA and finally France - all the while continuing to pursue his art. What makes him stand out from other artists of the period is he never forgot his Russian or Jewish origins. This homage to his roots are evident everywhere. For a full biography click HERE. 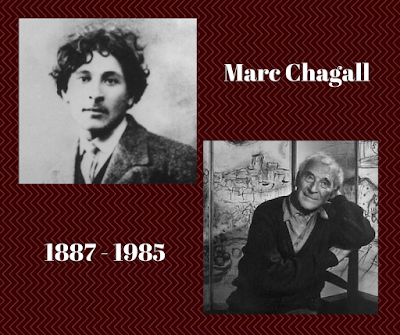 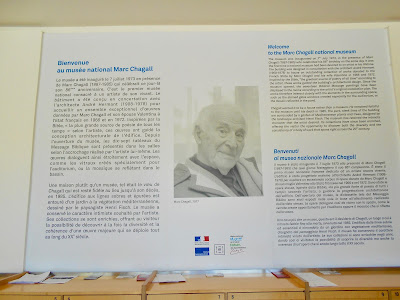 The museum was created with the cooperation and input of the artist himself. He not only curated the exhibit, but installed the immense mosaic, designed the stained glass for the concert hall, specified the layout of the gardens, and chose the exact placement of each of his works. 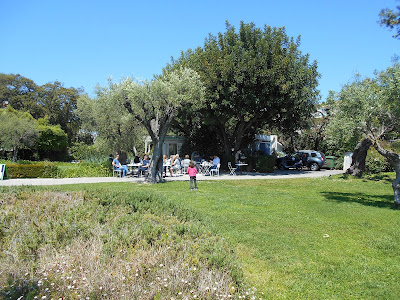 The first series of painting are his biblical series that illustrates the first two chapters of the Bible - Genesis and Exodus. 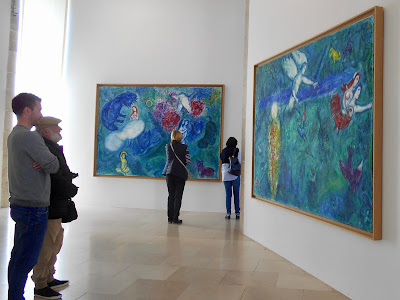 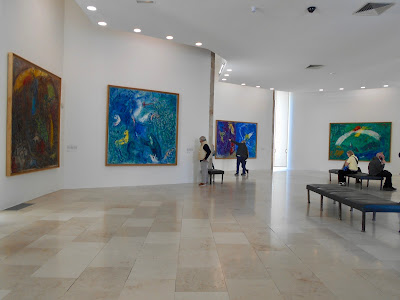 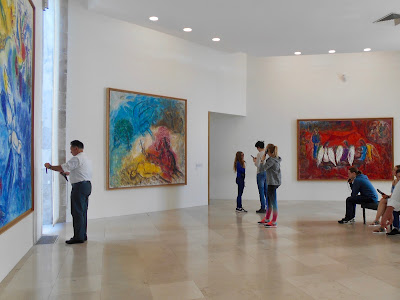 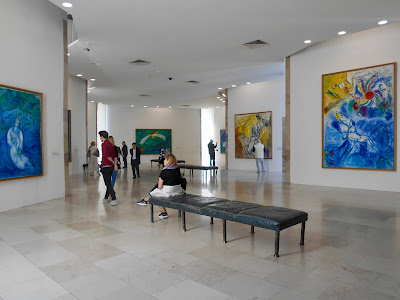 In another section of the museum is Chagall's series from the old testament entitled the Song of Songs. 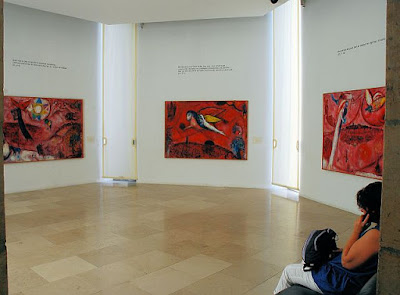 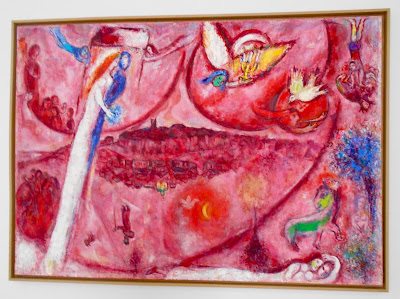 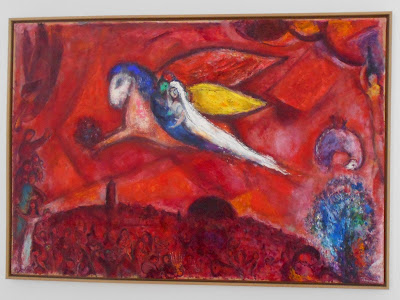 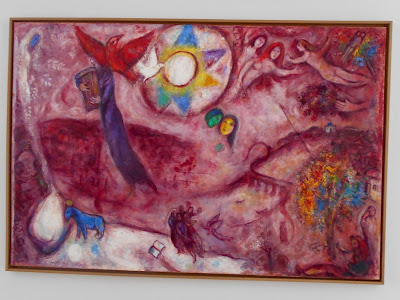 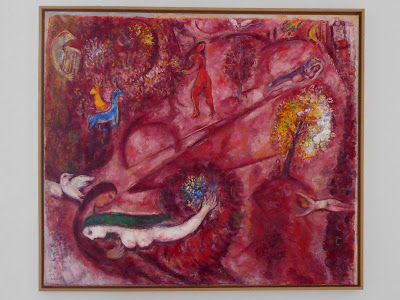 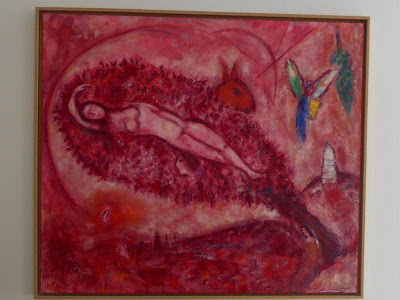 Additional Chagall works include a large mosaic on the exterior of the building near the water feature... 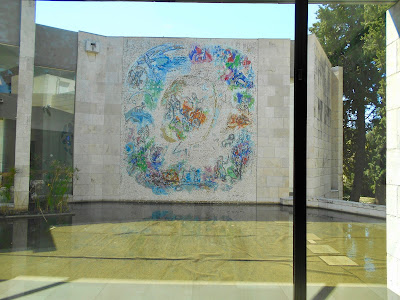 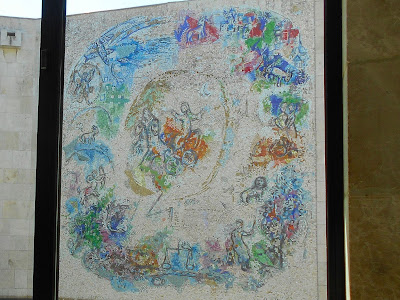 ...as well as some stained glass windows. 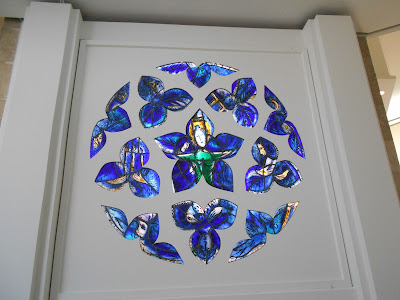 Another exhibit we enjoyed was what we called the shade tree series. Sadly, I did not get the name of the artist, but both John and I got caught up in the concept - as did the black cat wandering around outside the museum! 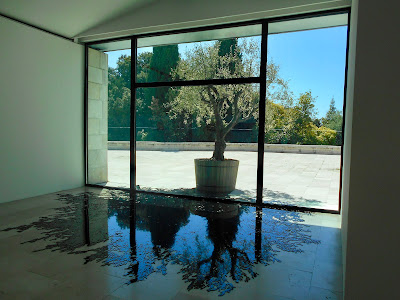 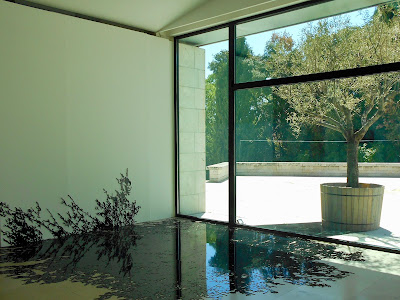 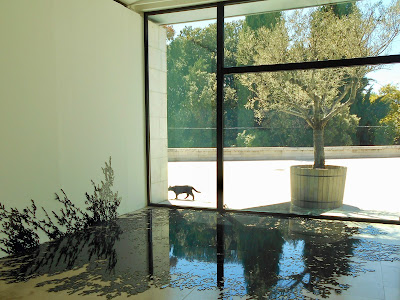 One final note about our visit to the Marc Chagall Museum. We use Google Maps to help us navigate from one place to another, but the one aspect where this wonderful technology fails miserably is pedestrian only pathways. As luck would have it the shortest route to the museum from the port included one of these passageways. Long story short we (I) got confused and when I asked a passerby for help he directed us to a street that I instinctively knew was the long way around. We headed that way, then stopped because it was the one route I was unfamiliar with. So there John and I were, map in hand, scratching our heads while conversing in English about what we to do next. Suddenly, a wonderful lady who had obviously been out doing her Saturday morning grocery shopping stopped to ask if she could be of help. We explained we were headed to the Marc Chagall Museum. She smiled, and said, "Follow me."

These little moments of bliss when one stranger helps another in this great big world is one of the reasons we're so passionate about travelling and we're thrilled to mention it happens far more times than one would expect. It's instances like this we will cherish forever. They are the best souvenir found in any country and better still they are FREE! They reinforce our belief that when religion and politics are excluded from the equation people are just people - kind, generous and compassionate - regardless of race or nationality.

As we walked up the winding staircase we learned she was an amazing 80-years young and had just had her second hip replacement. (Neither of us could tell from the way she spryly strode in front, climbing a steep set of stairs that left me puffing. Hearing this, John quickly offered to carry her groceries!)

She shared tidbits of her life - of how she and her husband had moved to Nice 30 years earlier after living in Morocco for many years. We learned she was originally Austrian, that her husband loved the Mediterranean climate and this was the deciding factor for making Nice their home. At the top of the hill at the intersection she pointed us in the direction of the Marc Chagall Museum and before we bade our goodbyes she told us of other must-see sites all within walking distance in this amazing city.

We're forever grateful to this kind woman for taking a few minutes out of her busy day to help two strangers find their way. We love Nice! 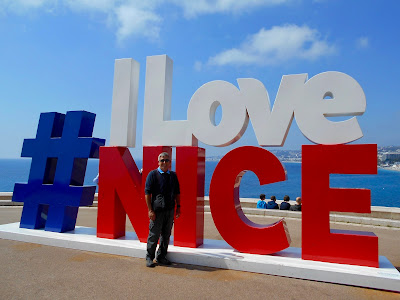