A short drive from Bonavista is the small community of Elliston (308 permanent residents) and the even tinier hamlet of Maberly with 20 full-time inhabitants. 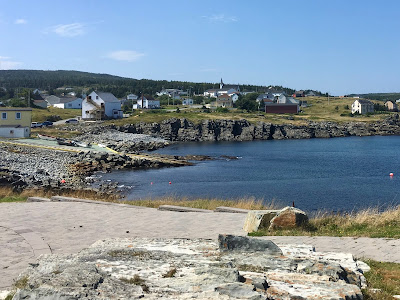 What drew us to Elliston is the Puffin Viewing Site, but it is also home to the Home from the Sea John C. Crosby Sealers Interpretation Centre.


To be frank both John and I hesitated visiting this centre as we recall the anti-sealing protests of the 1970s, but decided since we were here to proceed with an open mind and we are ever so glad we did. The exhibit explained how and why the seal hunt first began. 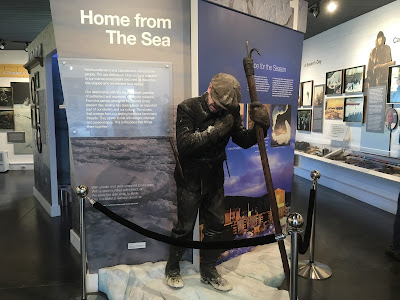 We were unaware the initial product of the hunt was seal oil used to fuel the street lamps of London England. Nor were we aware the seal hunt was one of the few options for Newfoundlanders to earn cash for their labours. The wealthy fishing merchants limited their livelihood to a barter-like system that kept the fishermen and their families in a habitual state of debt and poverty. This 13-minute video explains just a portion of their plight as well as an overview of the seal hunt.

The gallery opposite the exhibit houses three large paintings by John McDonald. Not only hauntingly beautiful, they tell his family's story of the 1914 sealing tragedy aboard the SS Newfoundland. 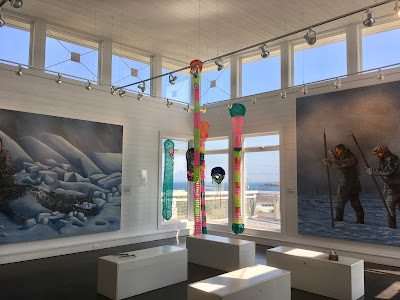 The artist's great grandfather, James Donovan would only say "You don't know cold," when asked about the time he and his brother Stephen were stranded on the ice. 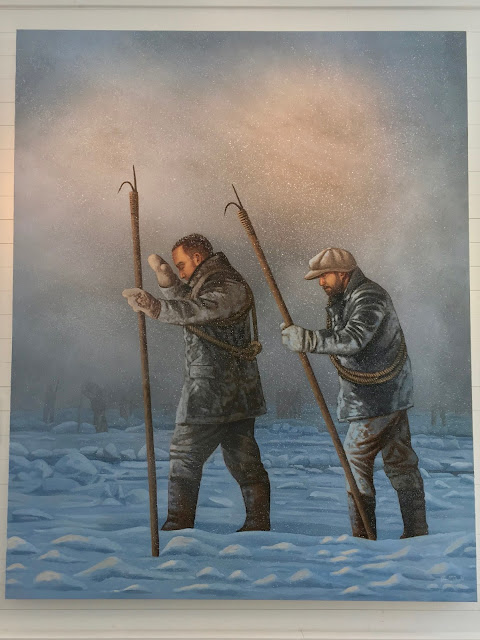 Struggling to stay alive, Stephen tried to take a dead man's cap for James's bare head, but James would have none of it. 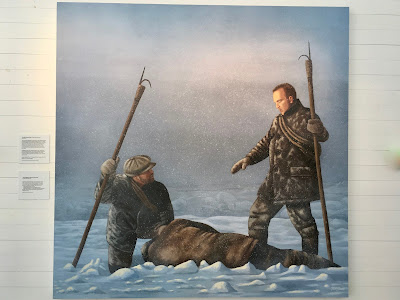 But when Stephen died, James took his dead brother's cap for warmth and as a result managed to survive. 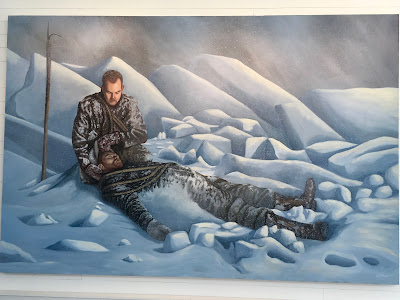 Hundreds of men (many who were just teenage boys) lost their lives while hunting for seal. Their names are listed on both sides of this massive stone monument. 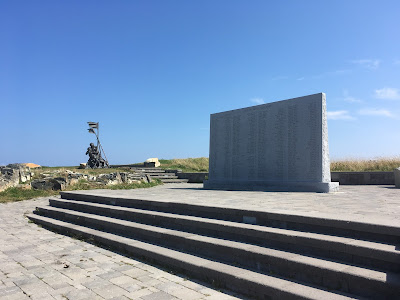 The nearby statue by Morgan MacDonald commemorates one family's loss of both father and son. 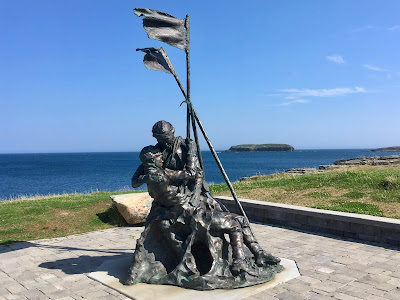 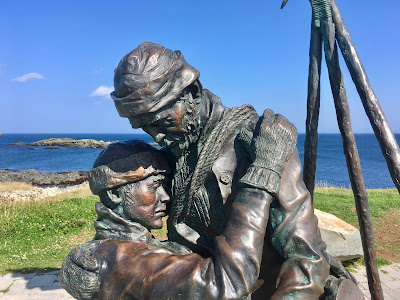 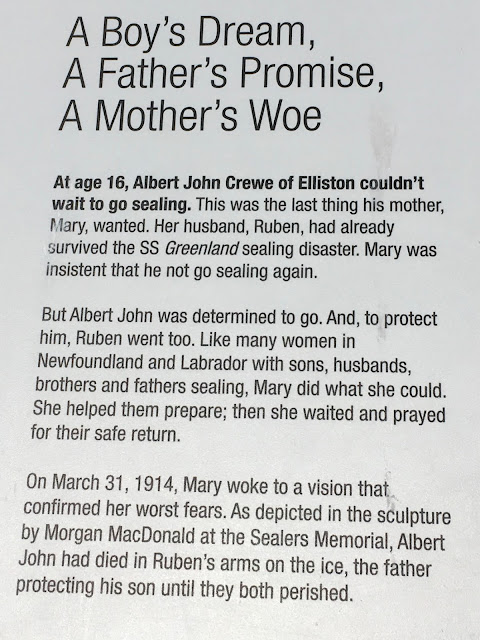 Newfoundland is rugged, harsh and unforgiving and the tiny village of Elliston is to be commemorated for doing such an excellent job of paying homage to its citizens who sacrificed so much for so little.

Moving onto a lighter topic we discovered Elliston is the Root Cellar Capital of the World. 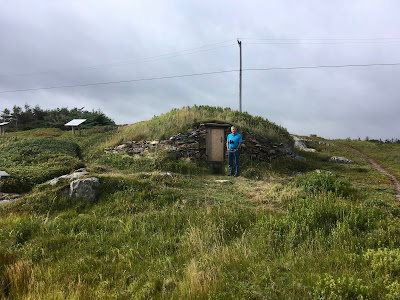 Unlike the room my parents had in the basement of our home in the 1950s to store vegetables and preserves over the winter these free standing structures are built above ground or wholly or partly buried in the ground. 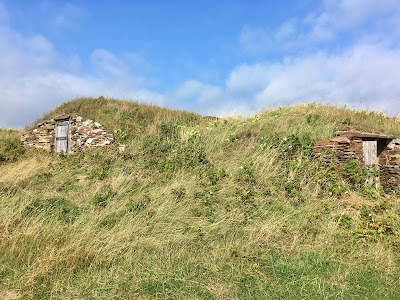 When Elliston declared itself the Root Cellar Capital of the World in 2000 there were 133 root cellars in the community, some of which have been in use for 200 years. Since 2000 a few have been destroyed to make way for new construction, but there are still plenty that dot the countryside. 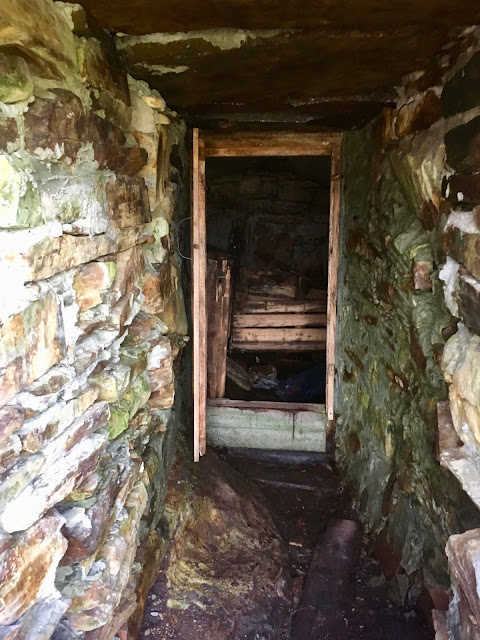 The majority include a "hallway" that leads to the inner chamber where the vegetables and canned goods are stored. 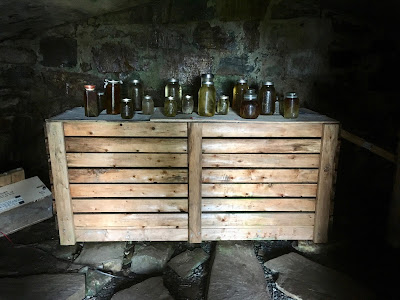 One fun fact is the folklore associated with these root cellars. Elliston parents often told their children babies came from the root cellars and in Maberly it was one specific root cellar belonging to John Murphy. Apparently this tradition of connecting babies and root cellars can be traced back to the UK, but it does make me wonder what John Murphy did to gain such a reputation!

A kilometre or two in between Elliston and Maberly is the Puffin Viewing Site. It's basically a small shed set up on a cliff that guides visitors to the rock where the puffins and other sea birds congregate. When we arrived a young man sat inside and greeted us, but when we returned he'd vanished!

This home to the left of the above shed was pristine and oh, what a view these homeowners have. 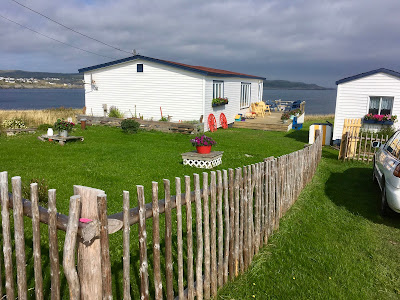 From the road it's an easy 10-15 minute walk to the cliffs to see the puffins. The scenery along the way is breathtaking. 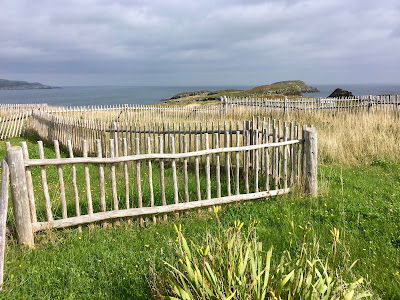 The strength and power of the ocean is evident by the way it tossed these round (white) boulders up onto the cliff edge. 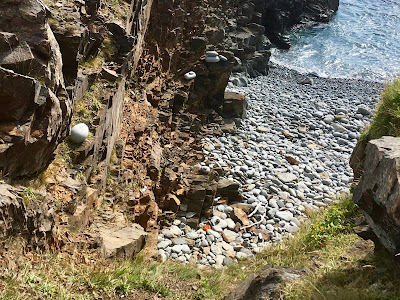 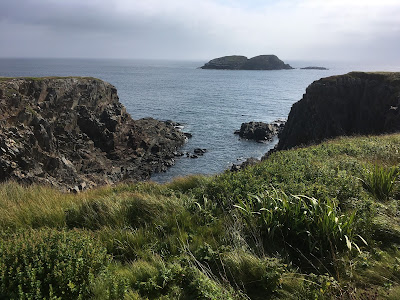 Across the divide and on the next island are the puffins. 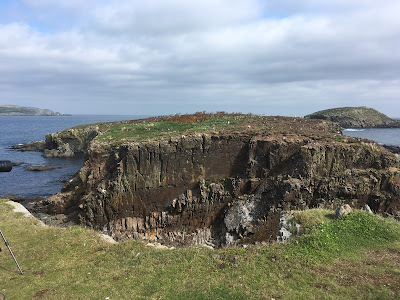 Locals told us we were fortunate to see the puffins (and we saw thousands) in mid September as they are usually gone elsewhere by this time of year. 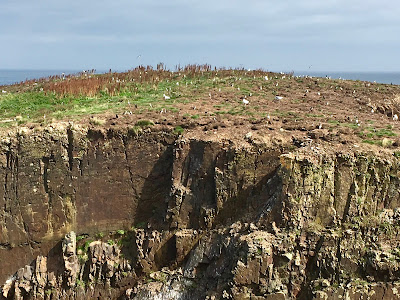 With my iPhone I took a little video and am quite happy with the results.

Meanwhile, on our side of the cliffs, were the real photographers with their telephoto lenses. While I love my iPhone and its user-friendliness this is one instance I was more than a little envious. I would have loved to have gotten a close-up shot of these amazing birds. 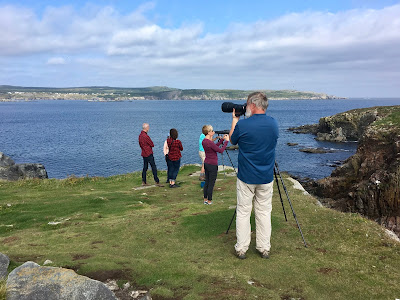 The scenery along the short drive from the Puffin Viewing Station to Maberly continued to inspire. This home was being renovated and again it made me slightly envious of the homeowner. Just look at that view! 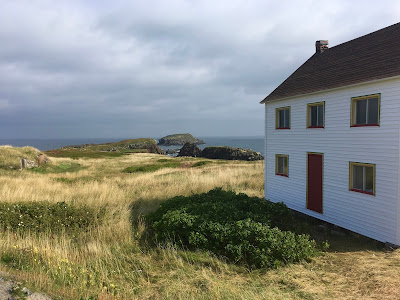 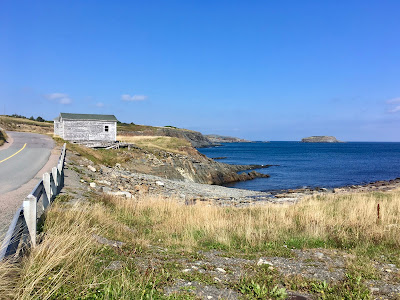 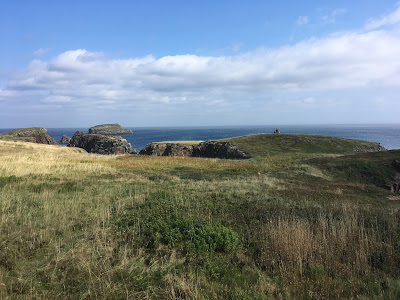 In Maberly the Puffin Ventures Craft Shop and it's Puffin Train is the number one attraction. Inside this tiny 12' x 16' shop local hand made items are showcased and as we browsed we chatted, laughed and shared histories for at least 30 minutes with the two women manning the shop. One was a local  born and bred while the other was a transplant from Toronto who'd lived in Elliston for 12 years. FYI, John and I left with fond memories as well as a hand knitted toque and crocheted scarf! 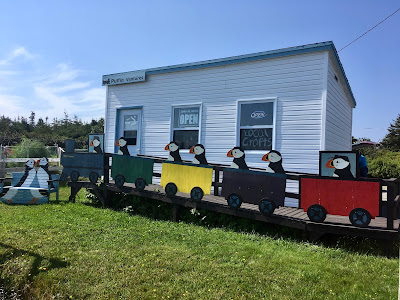 Next post we're heading back to Bonavista and the Mocklegger Plantation house. If you have not yet done so, please sign up to receive the next post via email. (You can unsubscribe at any time.) The box is at top right corner of our blog.