On our final day in London we visited the Churchill War Rooms. The war rooms became operational on August 27, 1939 just a week before Britain declared war on Germany and closed six years later on August 16, 1945. 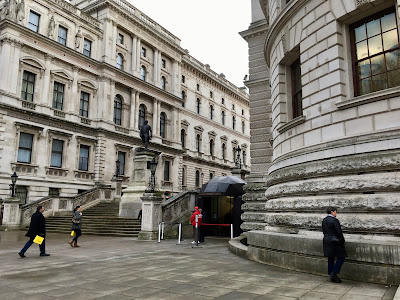 These underground rooms beneath Westminster streets allowed Churchill and his staff to focus on winning the war 24/7. They were not bomb proof as most people assumed and when Churchill became aware of the danger (during the blitz) should they receive a direct hit he ordered extra concrete be added to strengthen it.

Interviews with the men and women who worked alongside Churchill are included in the exhibits and their personal memories add much insight into Churchill's personality and dogged determination. 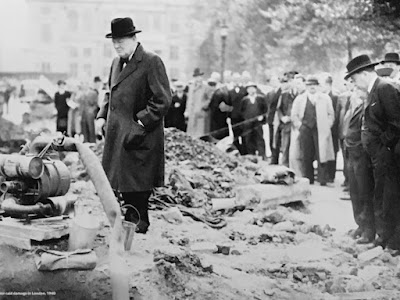 The beginning of the tour passes through these long, winding corridors with an audio guide explaining the purpose of each room along the way. 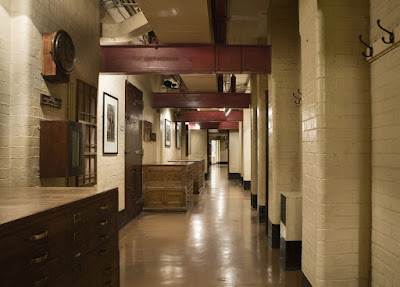 Churchill rarely if ever slept overnight in the room appointed to him (below) as there was no running water in the bunker. He did, however, make regular use of the bed for afternoon naps. On the rare occasion he did sleep here he was forced to use a bed pan he called a "gozunda" - because it goes under the bed.


There was a private room for his wife, although she did not use it either.

Churchill's closest staff members were literally seconds away from Churchill's bedroom - just down the hallway.

A few weeks before our visit we watched a fascinating BBC series about Churchill from the perspective of his bodyguard, Tommy Thompson. Churchill had almost a childlike innocence and was always placing himself in danger - all the while Tommy did his best to keep him safe. Hitler understood Churchill's importance and as such his operatives made numerous attempts to kill him. Even during their time in the bunker Tommy carried a gun for Churchill in the event the Germans should capture the building.


Winston loved food and while he too was rationed during the war his personal cook managed to elevate his meals to a more palatable standard. He saw no reason to apologize for his vice and said simply, "I'm easy to please. I like the best."

He had a telephone linked directly to the White House and President Roosevelt. The tiny room was disguised as the Prime Minister's private toilet. 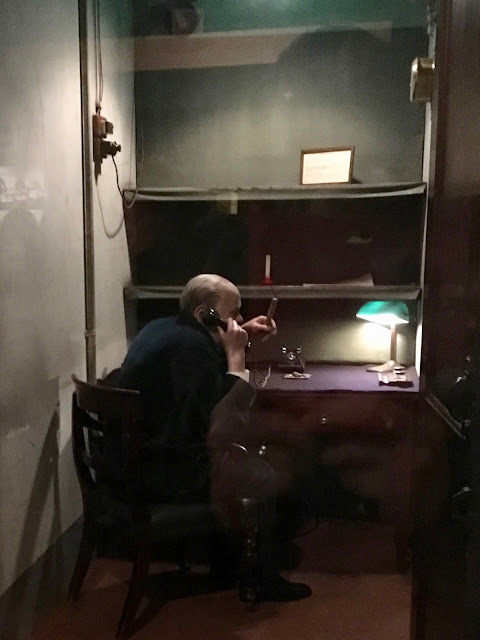 Churchill hated all noise distractions, from whistling to the clicking of a typewriter. Secretaries worked 12-hour shifts in the Cabinet War Rooms and used specially adapted typewriters - the Remington Noiseless - imported from the United States.

One secretary recalled another daily tap-tap-tap she often heard. It travelled through the war room via the many pipes. This was Winston's not so subtle announcement he intended to take a brief afternoon nap and therefore everyone should be quiet. Upon waking he would repeat the tapping to inform them he was up and raring to go!

Those afternoon cat naps served their purpose as Churchill worked tirelessly throughout the war with only three to four hours sleep per day. Many people mentioned it never occurred to him others might require more sleep as he expected those around him to follow a similarly gruelling routine. Few if any complained. Many of those interviewed said they were inspired and honoured to be in his presence and more than willing to do whatever they could for the war effort. 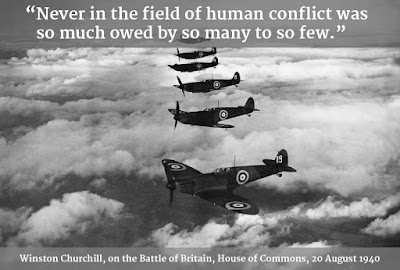 Churchill recorded four speeches while in the bunker and snippets of these and others are featured in the exhibit. 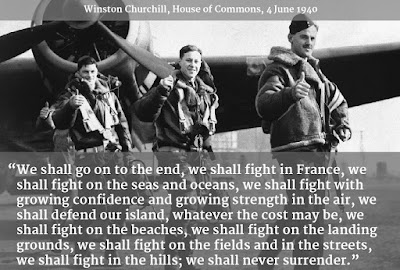 Churchill may have disliked being cooped up in the bunker, but he enjoyed showing it off to visiting generals - especially the Map Room as it was the hub of the war rooms. 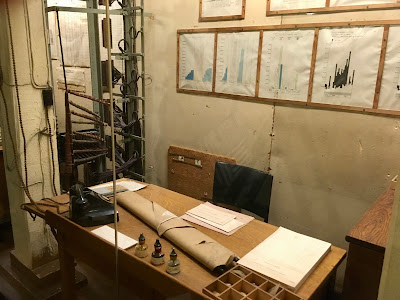 For six long years the lights in the Map Room were always on and the room manned 24 hours per day. 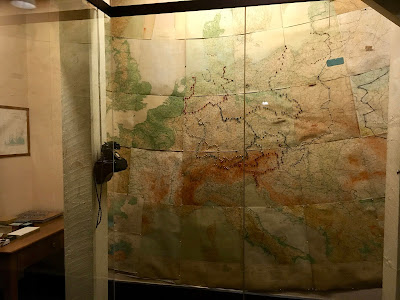 It is here Churchill and his staff received daily casualty lists, plotted new and counter defences and planned the D-Day invasion. 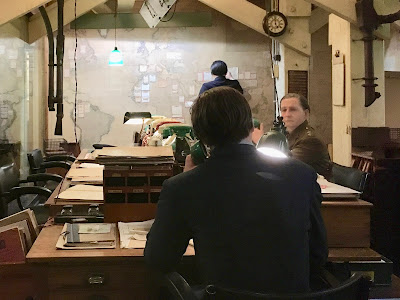 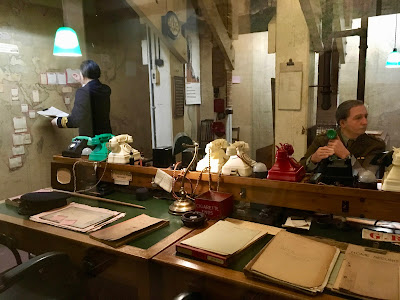 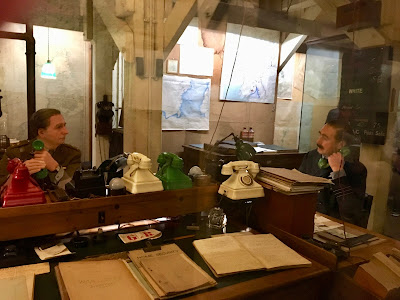 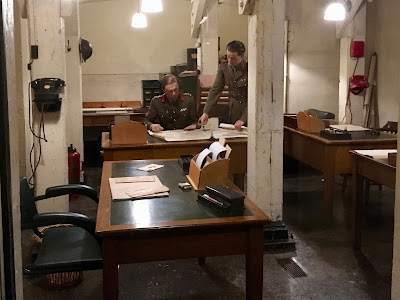 Other exhibits include photos, memorabilia, and such of Churchill and the war years. 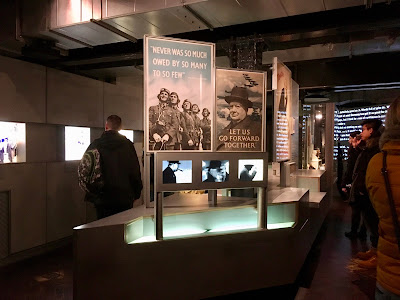 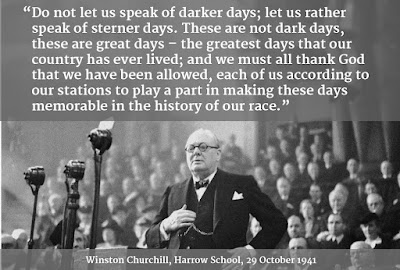 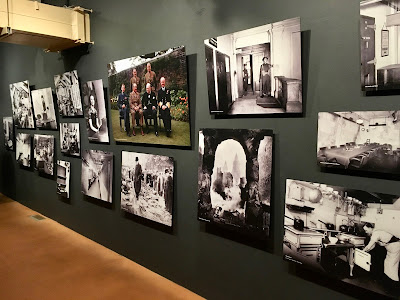 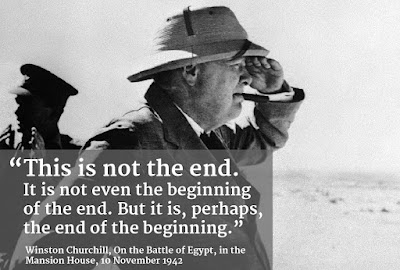 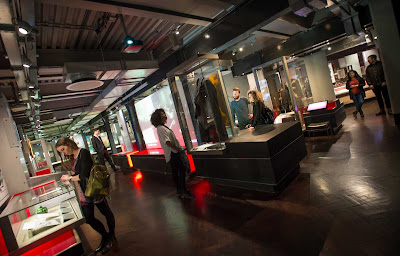 Also on exhibit was one of the infamous enigma machines. 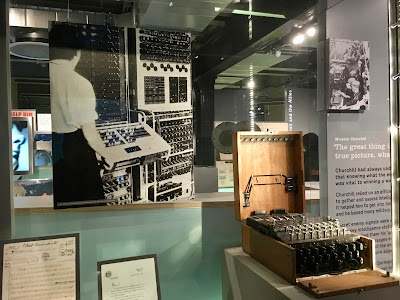 Winston was as hands-on during the war as those around him would allow as attested to by his bodyguard. Most times, however, Winston ignored their pleas and jumped in feet first. One such occasion was D-Day. He was determined to be at the front and nothing or no one could persuade him otherwise. It is said in total desperation his bodyguard, Tommy, asked the King to intervene. More than anyone Tommy knew Churchill's sense of duty was the only thing that would override his urge to be front and centre. (It worked!)

My Dear Winston,
I have been thinking a great deal about our conversation yesterday and I have come to the conclusion that it would not be right for either you or I to be where we planned to be on D day. I don't think I need emphasize what it would mean to me personally, to the whole allied cause if at this juncture a chance bomb, torpedo or even a mine should remove you from the scene: equally a change of Sovereign at this moment would be a serious matter for the country and Empire. We should both I know love to be there, but in all seriousness I would ask you to reconsider your plan."

On August 16, 1945 after Japan's surrender the lights in the Map Room were switched off for the first time in six years and Churchill's bunker fell into darkness. Everything from the colour coded telephones to the noiseless typewriters, kitchen utensils, furniture, maps and mountains of notes were left behind. 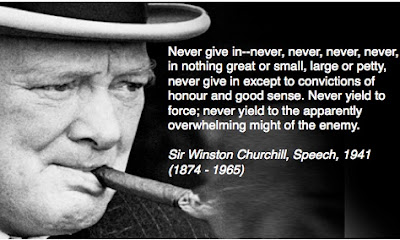 In his retirement years he spent time with his family and pets and focused on writing and painting.