Sunday was cool and sunny and like the locals we headed to a nearby plaza for a couple of relaxing hours to soak up a few rays and savour a glass of wine out of doors. 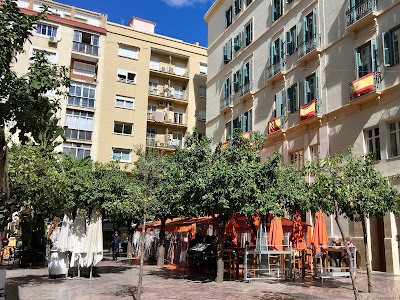 While most of Europe has been inundated with freezing temperatures and record breaking snow falls this past week Malaga has gotten off relatively easy. Yet, for a region that averages 320 days of sunshine per year, four or five straight days of rain is no laughing matter.


The majority of shops close on Sunday, but we happened upon a grocery store that stayed open until 2:30 PM. That was our first port of call and on the walk back to the flat the Spanish flag in yet another plaza flapped in the breeze while the sun shone brightly. 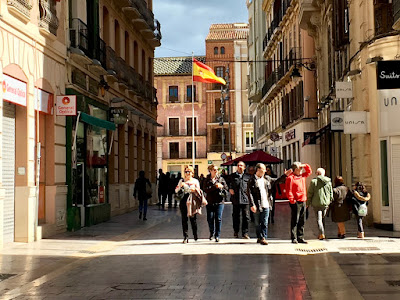 Malaga is a gorgeous city as shown by the blue sky silhouetting the cathedral tower and the red geraniums hanging on the street lights. 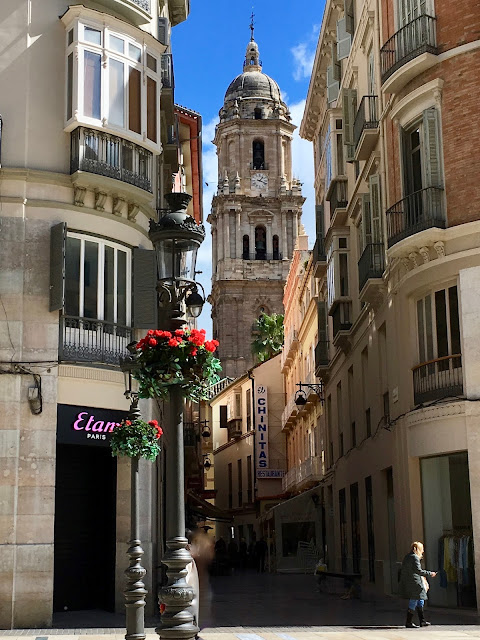 These next few shots were taken when the rain let up for a brief 15 or 20 minutes after our visit to the Carmen Thyssen Museum. The glistening stone walkways were breathtaking - and of course, the whimsical art work added to the experience. 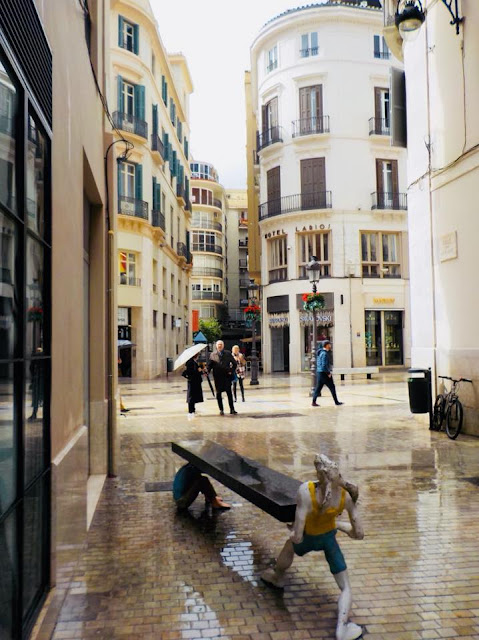 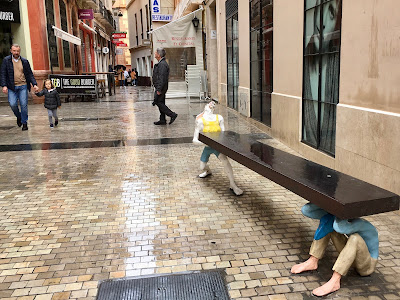 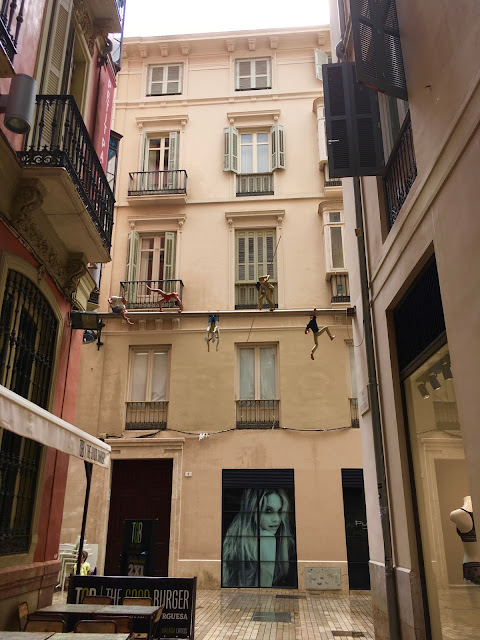 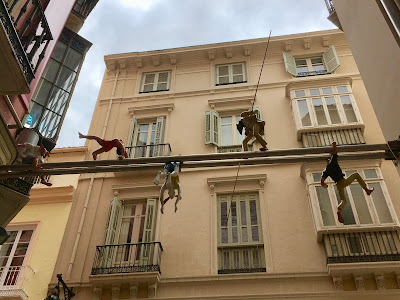 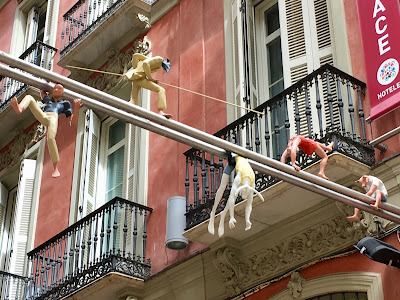 Saturday we headed to the Picasso Museum. Once again it's a short five or six minute stroll from our flat and in spite of the rain the streets, shops and restaurants were crowded. 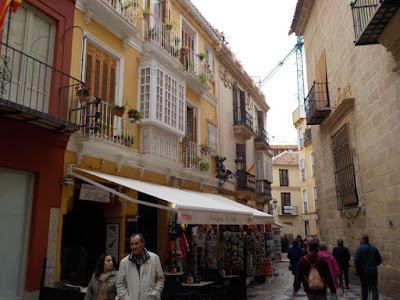 Further along we spotted another space invader. (We've seen three or four so far since our arrival in Malaga. Another is in the video above). Created by an anonymous French artist (born 1969) who goes by the name Invader they have quite a following and his works (3627 to date) can be found in 76 cities around the world. 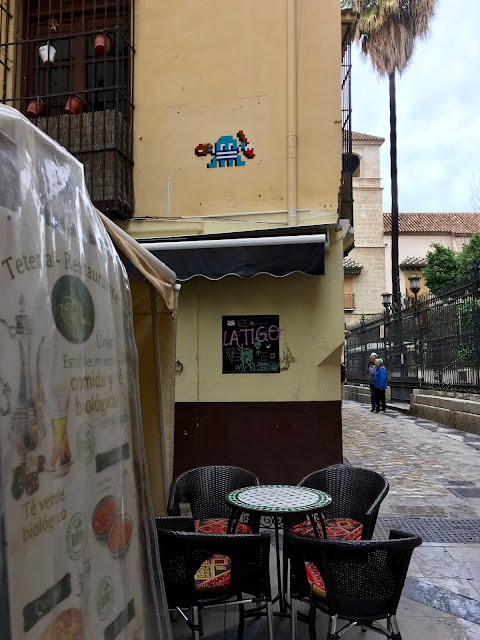 At one point we ended up at the back of the museum and had to retrace our steps, but the bonus is we paused to admire the gorgeous pastel colours of these buildings as well as the inlay street design. 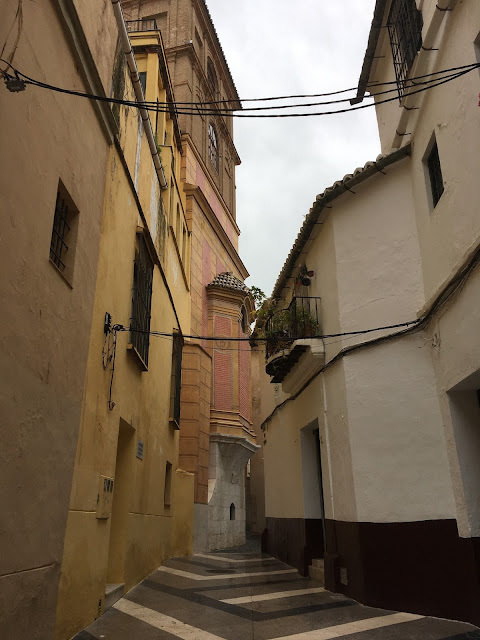 Back on the correct street is this convent just a few doors down from the museum. I took two photos - one from the street that includes the wrought iron gate and one by slipping the camera through the bars! 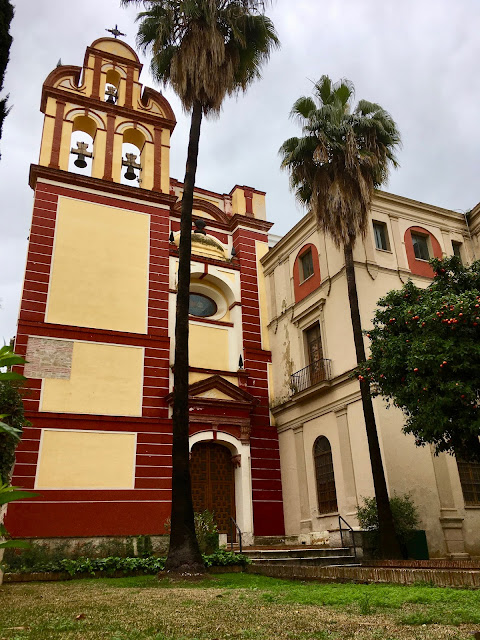 Pablo Picasso was born in Malaga in 1881 and while he lived the majority of his life in France his family donated 285 pieces of his work to the museum that opened in 2003 in the Buenavista Palace. 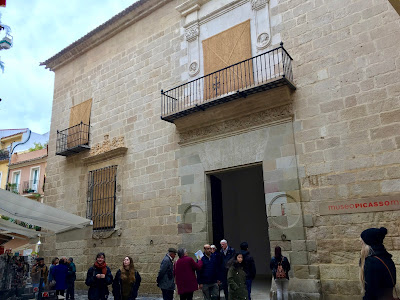 Like the majority of Spanish buildings there is a central courtyard. 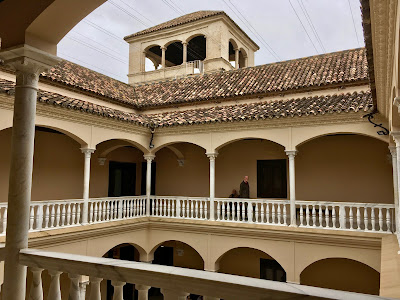 The exhibits are spread over two floors and these are from the museum website. On our visit these rooms were filled to capacity. 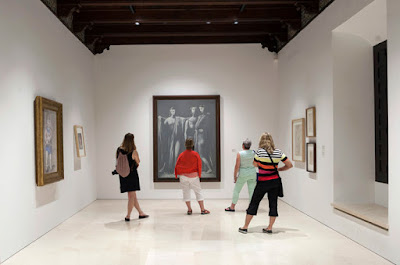 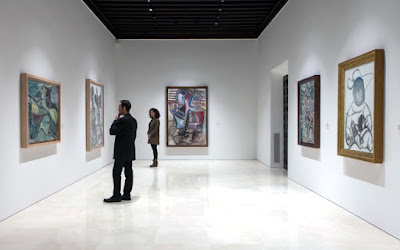 In the basement is an archeological site of the earliest beginnings of Malaga when the Phoenicians founded the city in 750 BC. 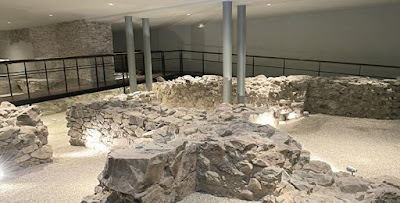 When I stepped into the first gallery and took a photo of one of Picasso's earliest paintings I noticed some dark lines that seemed to dance across the screen (below).

Unsure if it was my eyes or my camera or both I examined the next photograph and saw the lines were somewhat muted, but still visible.

I wondered why until a polite but firm staff member hurried to my side to inform me photographs were not permitted. That made me all the more curious about what sort of a security system is in place. Although I was a little miffed about the no photo policy in the end it really did not matter as I discovered the main paintings and sculptures on the museum's website. A quick copy and paste and voila! (This includes the interior shots of the gallery and basement above.)


John and I admire Picasso's reputation as one of the 20th centuries most important artists, but he is far from our favourite and when we were in Madrid last year we opted to bypass the Picasso Museum.  We don't regret that decision and while the Malaga museum was interesting to be brutally honest we much preferred our late lunch at the El Chinitas Restaurant! 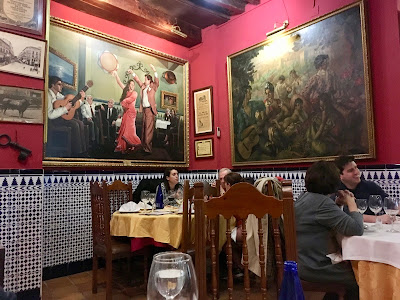 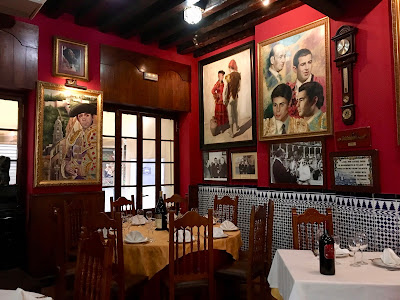 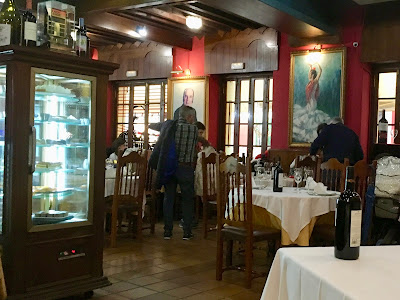 All in all a wonderful weekend - in spite of the rain - with Pheonicians, Picasso's and plazas.

BTW: If you are wondering what happened to the comment section, I recently noticed the majority of readership of my blog is from Russia and the Ukraine. Really? Why?! Well aware these tech savvy individuals can sway elections around the world there is no doubt they could infiltrate a simple blog so I opted to give them as little leeway into my or other accounts as possible. Better safe than sorry!