Back in Nice with Petra & "the Girls"

The past week has flown by. We arrived in Nice the evening of April 17, reconnected with homeowners Katherine and Paul on the 18th and officially began our housesit with Petra and "the girls" the following day. It's hard to believe today marks the end of the first of our three weeks here, but oh, what a week it's been! 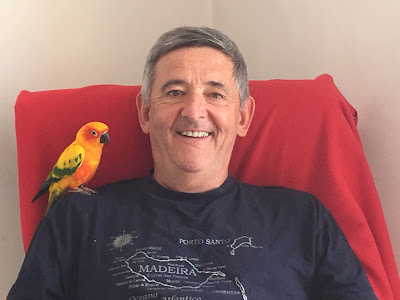 Upon our arrival at the port side apartment Katherine presented John with a gift. The tee-shirt features Petra and reads, "Prepare to be boarded" - and he was! 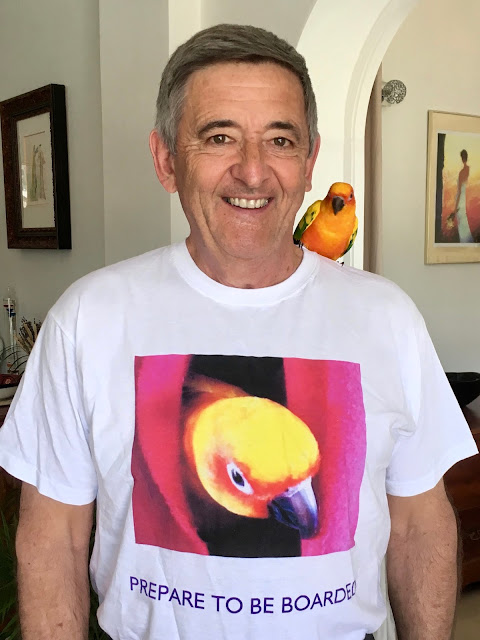 The girls, on the other hand, prefer their humans to keep a distance and that seems to suit Petra just fine. No one will dispute his claim on John. This particular human is his and his alone...until Paul returns, of course. 😀 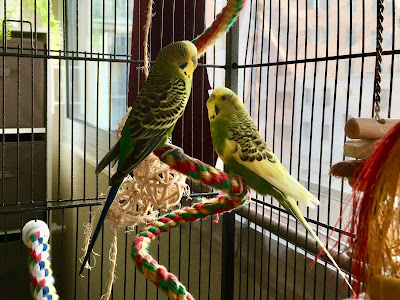 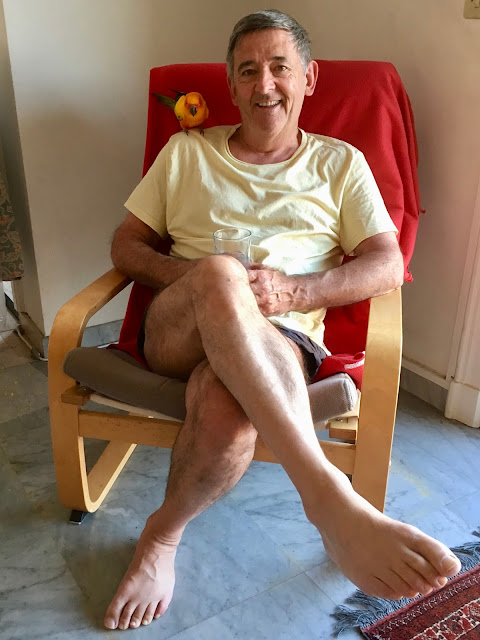 As is customary when beginning a housesit we stay close to home for a few days to give the pets time to get comfortable with our presence. So while we have not wandered off too far this week we have reacquainted ourselves with the port and old town... 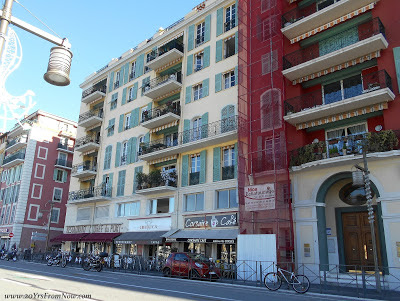 ...starting with just relaxing on this amazing balcony. 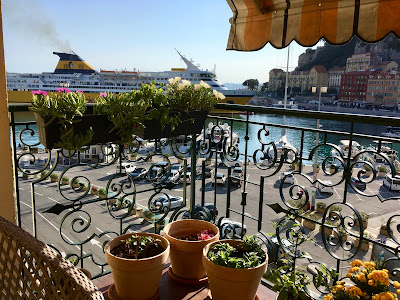 This million dollar view is forever changing throughout the day and night. 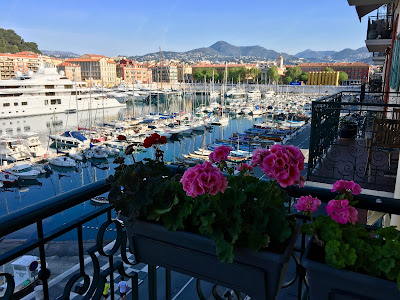 Take for instance that large white yacht docked across the way. Apparently it's owned by a Russian oligarch who owes the French government money and so they seized his ship. As if that's not bad enough, it costs him an additional €20,000. PER DAY to be docked in the port. Guess he decided to settle his account because as of midweek the ship left and we haven't seen it since. 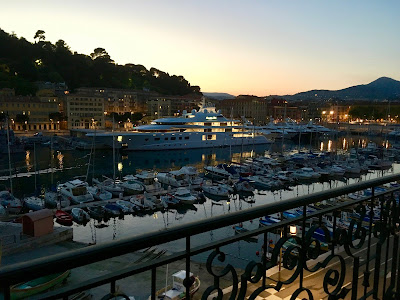 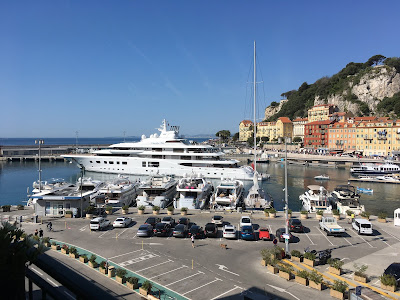 We've walked into old Nice numerous times and what's astonishing is that after three years and goodness knows how many times we've wandered through its maze of streets we've actually discovered a few streets we'd not been down before. How cool is that? 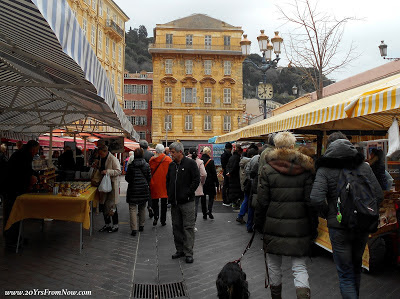 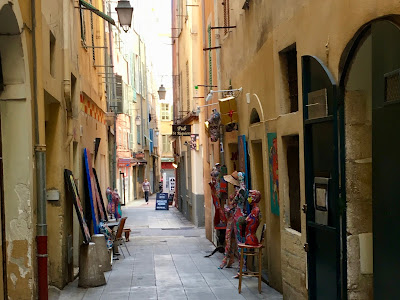 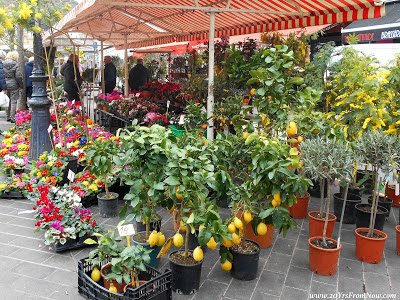 The flower market is open daily and last Sunday when we visited I spotted a bouquet of lilacs for €6.00. Being a sure sign that spring has finally arrived I was not the only one who grabbed a bunch. 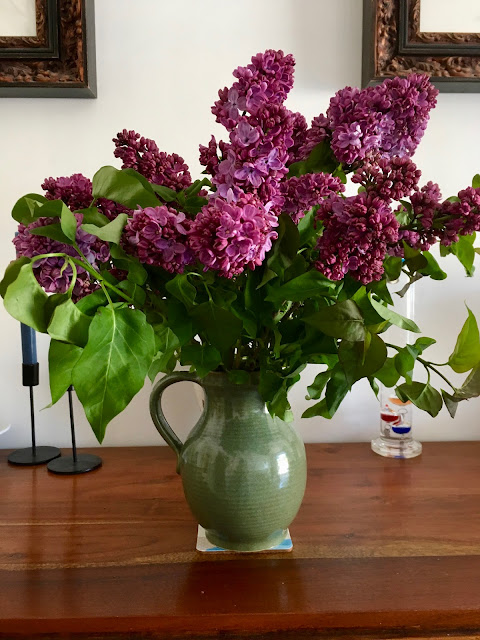 What I love about the old part of Nice is that it's not just for tourists. Sure, there are souvenir shops... 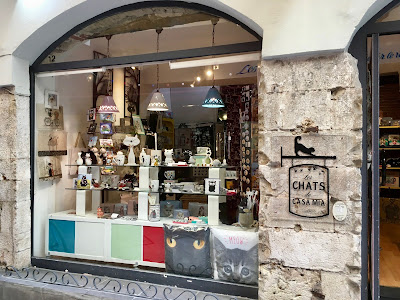 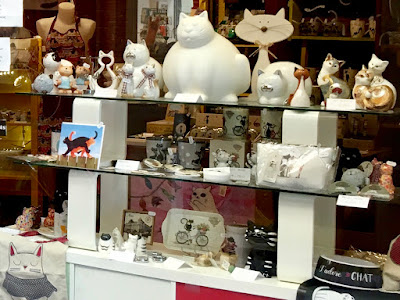 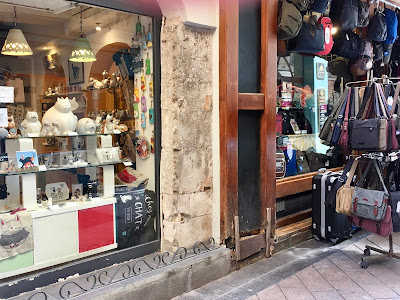 ...but people live here year round and a great many of the shops cater to the locals. There are grocery stores, boulangeries (bakeries), butchers, fish mongers, cheese, spice, wine, clothing and shoe shops. 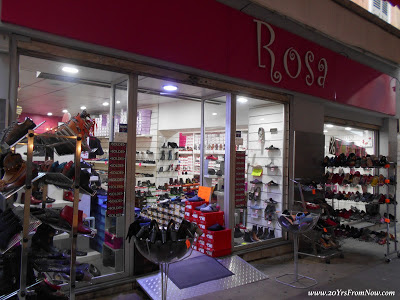 And did I mention the restaurants? There is a restaurant around every corner. Each offers something different and no two look alike. 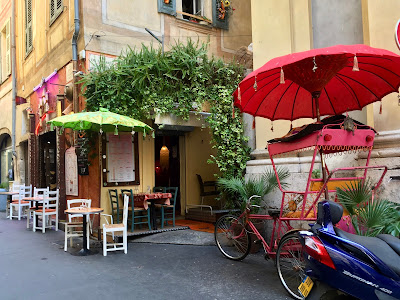 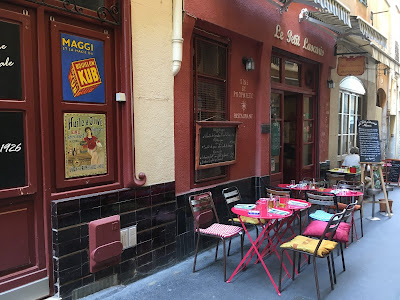 We also strolled along the Promenade des Anglais and as the mercury reached 30C last weekend sunbathers congregated on the beach. A few brave souls ever ventured in the Med. 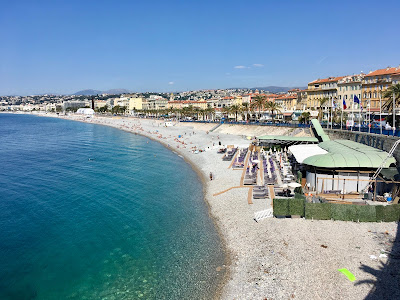 Right next door to the apartment is a "creperie" called Le Pass'port and before we arrived I mentioned to John that I wanted to try their crepes before we returned to Canada. It was delicious and well worth the wait and John assured me his omelet was pretty tasty as well. 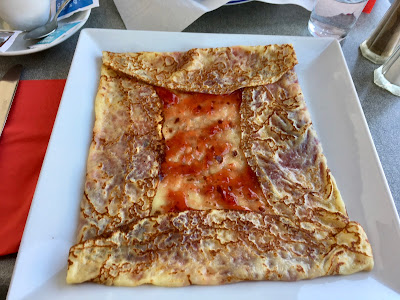 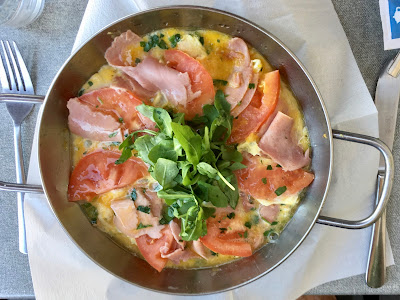 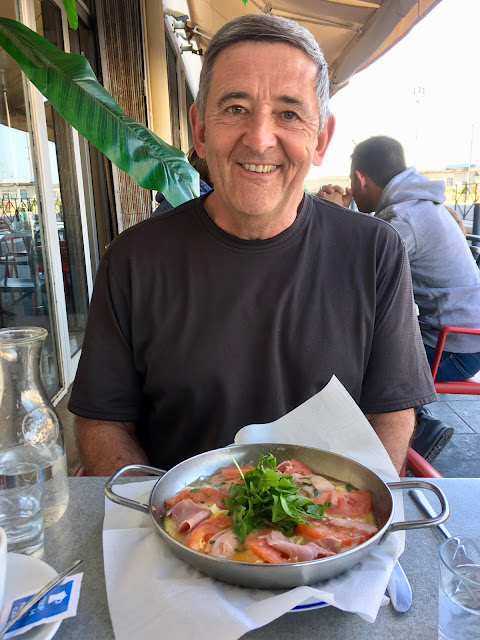 That said, Chef John has been on a roll this week. Here are just three of the lovely meals he prepared - and he wonders why I no longer bother to cook. Why would I?!

More about what else we did in our first week in Nice in the next post.