Travel itineraries are rarely carved in stone and today is a perfect example of that. Since early January we've had tickets for the Eurostar (chunnel train) from London St. Pancras to Paris Gare du Nord. Due to the rotating French rail and air strikes that began last week and continue through June, however, our train was cancelled. So, what's a couple to do? Re-book and make the best of it, of course, and this morning John suggested we visit the Guildhall Art Gallery. 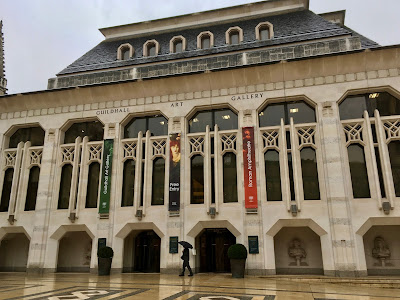 But first I should mention that on Sunday we bade goodbye to our Winchester homeowners and caught the train to London's Vauxhall station. My reasoning in choosing it over other stations was simple. It is near the one London site we'd yet to see - the MI6 building made famous in the James Bond film Spectre. 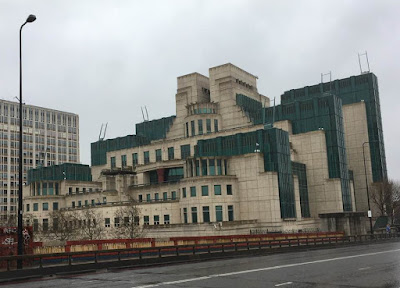 After we checked into our Travelodge hotel near Kings Cross we headed outdoors and discovered The Lucas Arms Pub a short distance away. John ordered the Sunday Roast while I requested the lasagne. ( I should have had the Sunday Roast!) 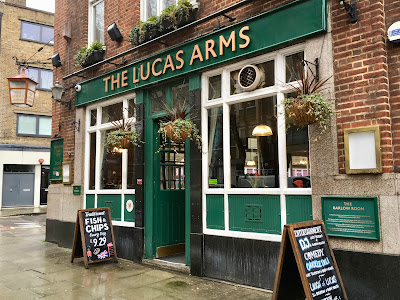 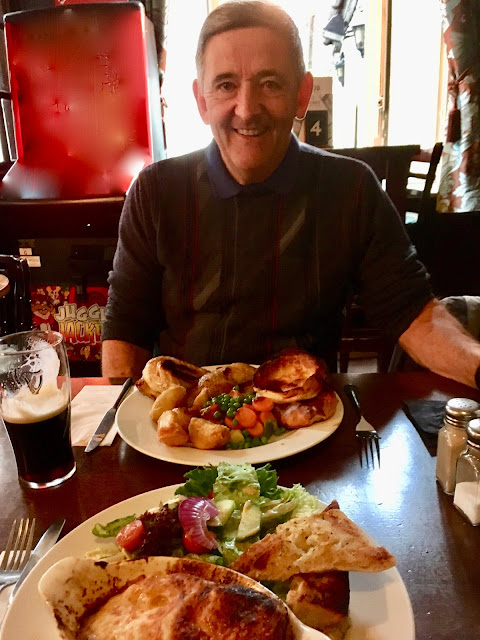 Today, Monday, we took the tube to Bank and then walked to Guildhall Art Gallery, next to the Guildhall Great Hall that has been the centre of city government since medieval times.

The art gallery focuses on London painters and paintings, mainly from Victorian times to the present. 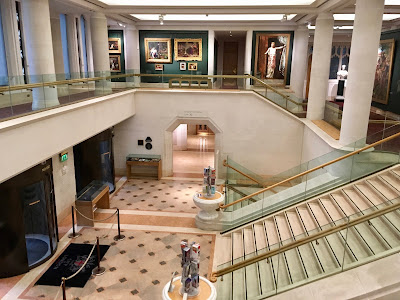 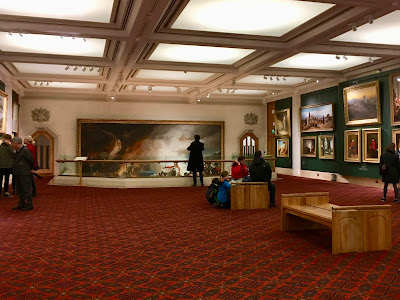 Defeat of the Floating Batteries at Gibraltar painted 1783-1791 by American-born John Singleton Copley (1738-1815) was commissioned by the City of London to honour the officers who took part in the battle. It remained in the gallery until April 1941 when it was taken down and sent for safety to Swallowfield Park near Reading just three weeks before the gallery burnt down during WWII. Following the decision to rebuild the gallery in 1984 the architects created this double-height wall  shown above and below specifically for the painting's display. 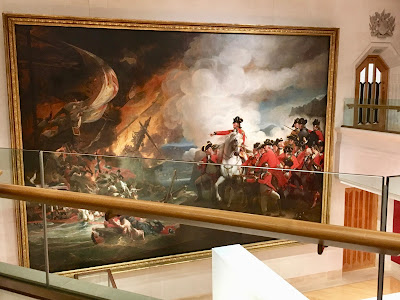 Other paintings that also caught my eye include...


On the lower level beneath an arched brick ceiling are paintings dating from the 1500s and 1600s. 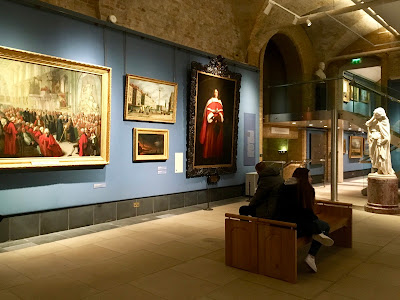 A number focused on the 1666 Great Fire of London. The fire left over 65,000 people homeless and a special commission of royal judges - the Fire Court - were appointed to settle disagreements between tenants and landlords and assess compensation claims.

The fire judges were crucial in enabling the rebuilding of London. In recognition of their work the City's Court of Alderman commissioned John Michael Wright to paint twenty-two portraits of the Fire Judges to hang in the newly restored Guildhall. All were framed in carved and gilded pine frames, eight of which were made by one Mary Ashfield "at £12 a peece". It is believed this is one of her frames.

Tucked in and around the modern glass staircase on the same level and also in another room off of it are more contemporary works. 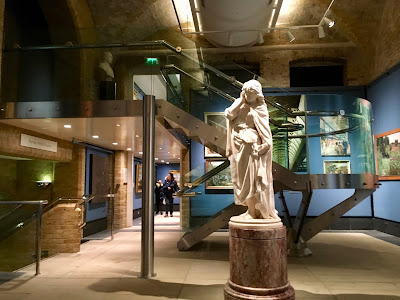 I particularly liked Blackberries in August, Muswell Hill painted in 1980 by John Pierce (b. 1942). 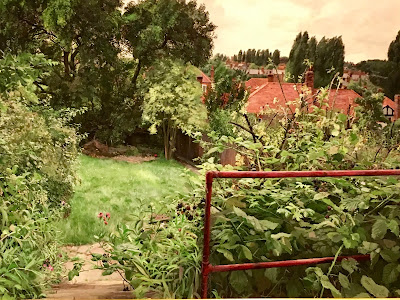 The blackberries were so lifelike one was tempted to pluck them off the canvas. 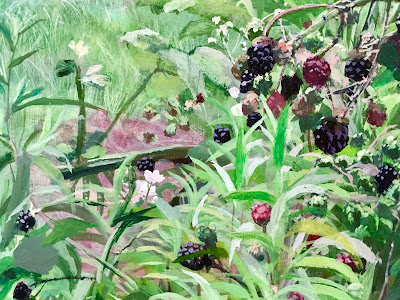 When excavation for the new art gallery began in the 1980s construction came to a halt with the discovery of a Roman wall. Experts quickly determined it was a Roman Amphitheatre and it is now available for public viewing.

We left the art gallery and walked across the square to the St. Lawrence Jewry church. 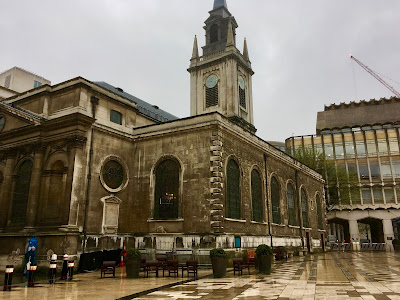 Upon entering we were informed the Monday Lunchtime piano recital would soon commence so we quickly took a seat... 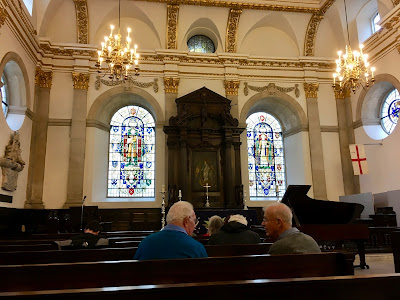 ...and were delighted to have stumbled upon such a talented pianist as Antonio Oyarzabal. It was a most enjoyable 45-minute recital.


Our final stop of the day before returning to the hotel was lunch at the Old Doctor Butler's Head pub. 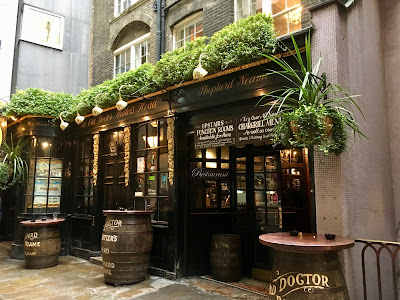 As we arrived shortly after 2PM so we had the entire upstairs restaurant to ourselves. The downstairs bar, however, had lots of patrons - mainly businessmen on their "coffee break"?! 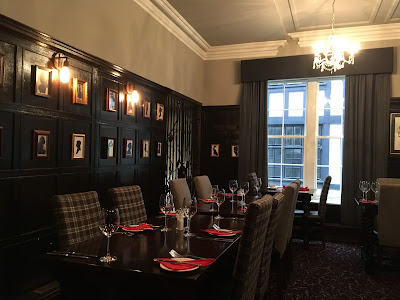 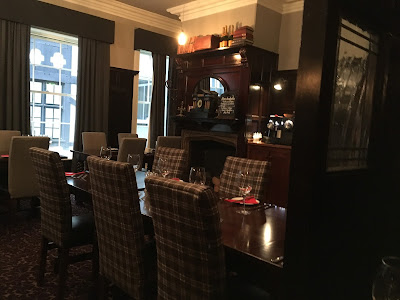 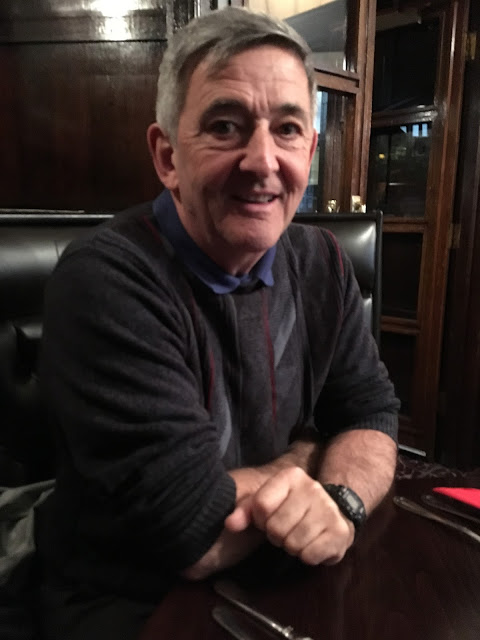 All in all it was a great albeit unexpected day in London. Next stop - if the travel gods are willing - Paris!