It has been a frigid, snowy month in Ottawa, but then it IS January and we do live in Canada!


Nonetheless, for the most part, it's been a pretty enjoyable month. John and I have gotten into a routine that includes skating (for him) at the St. Laurent Community Centre at least three times a week, as well as some cross country skiing along the banks of the Ottawa River. We also frequent the Brittany Recreation Centre that is part of our condo complex. The highlight, for me, is the pool. More often than naught I have it ALL to myself and since mid-November I've been swimming more times than the entirety of the past decade combined. Total BLISS! 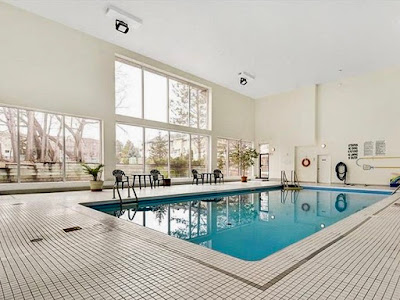 Last Saturday we headed to Dows Lake which is at the southern tip of the Rideau Canal Skateway. It was a cold day (-11C), but that didn't stop anyone from coming out to skate on the world's longest skating rink. John was eager to get skating, but politely posed for me. He skated both ways for a total of 15.6 km and did it in about an hour. 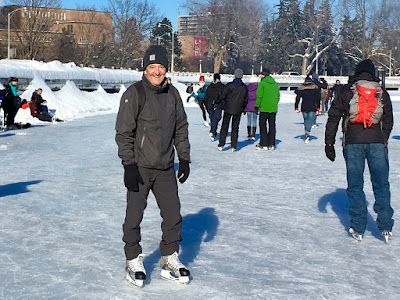 He didn't take his camera along, but this next photo shows his destination. The skateway begins at the National Arts Centre (on the far left) and is sandwiched between the Parliament buildings in the background on the left and the Chateau Laurier Hotel on the right.

I was impressed by the number of adults learning to skate and when I saw this woman (left below) and the apparatus she was holding onto I actually thought "hey, I could do that!" Who knows? Maybe next year. Another great feature are the outdoor fireplaces that are found all along the skateway, along with the food stalls where one can warm up with hot chocolate or a Beavertail pastry. 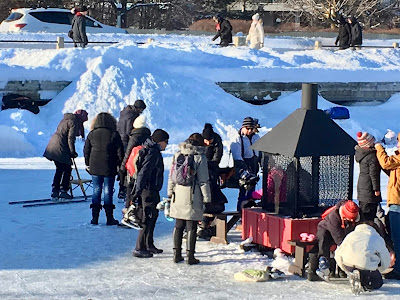 The Dow's Lake Pavilion where John started houses three restaurants and after he skated off I settled inside a window booth in Mexi's for a cup of coffee. A totally enjoyable hour was had by all!


On the final day of the month we headed to The Canadian Aviation and Space Museum where we spent a very enjoyable and informative three hours. (FYI, it was -17C outside so it was good to be inside.) 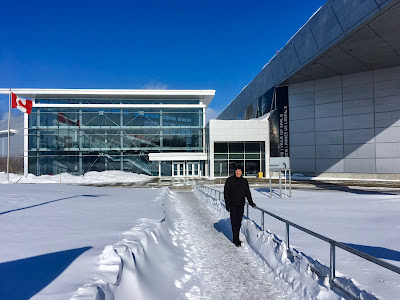 The first exhibit hangs high overhead the entranceway and yes, that plane is upside down. It's a Snowbird stunt plane flown by the Royal Canadian Air Force Snowbirds team. 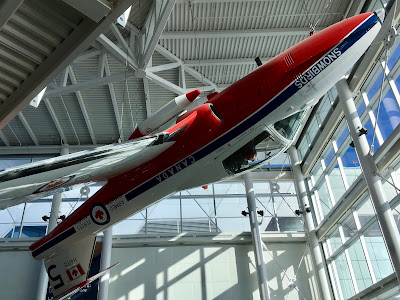 The museum focuses on the Canadian aviation story and it all began at Baddock, Nova Scotia on February 23, 1909 with the Silver Dart. 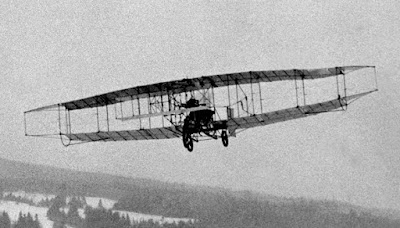 Designed and built by Alexander Graham Bell and his fellow members of the Aerial Experimental Association (A.E.A) it was piloted by Canadian John Alexander Douglas McCurdy. The replica below was built in 1958 by RCAF volunteers. 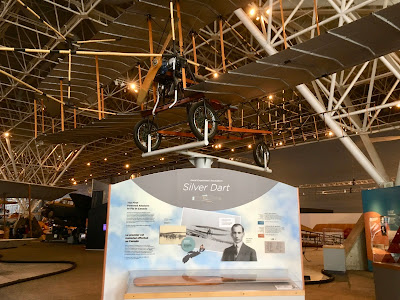 The Curtiss HS-1 also holds a number of firsts thanks to its ability to take off and land on most rivers and lakes which is such a must in Canada. These firsts include: the first bush flight in the world, the first aerial timber survey and the first forestry patrol, all taking place in 1919. Other firsts include the first mining claim staked with the use of an airplane and the initial leg of the Trans-Canada flight (both in 1920). In 1924 The Curtiss HS-1 was used for the first scheduled air service as well as the first regular airmail service.

One fact I found particularly interesting was that in the 1920s and 1930s much of Canada was still unmapped. Upon the end of WWI thousands of Canadian pilots wanted to continue flying and surplus military aircraft such as the Curtiss HS-1 were put into service as bush planes.

Arthur Fecteau (1910-1987) was an important Quebec bush pilot who operated A. Fecteau Transport. In the 1940s he developed these wooden skis to use on his airplanes. 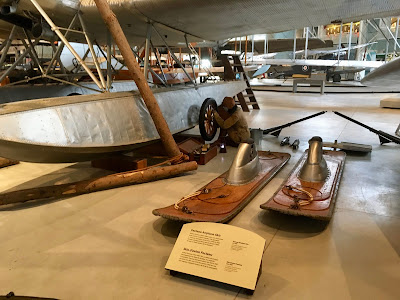 Canada's first national passenger air service - Trans Canada Airlines - flew planes similar to the one below. In 1965 the company was renamed Air Canada.

The second World War precipitated an aircraft manufacturing frenzy. More than 16,000 trainers, front-line and bombers were built in Canada alone. The number of people employed rose from just 3600 at the beginning of the war to more than 120,000 six years later. Of this workforce at least 25,000 were women (including my mom and aunt). By the end of the war aircraft manufacturing was the fourth largest industry in Canada. 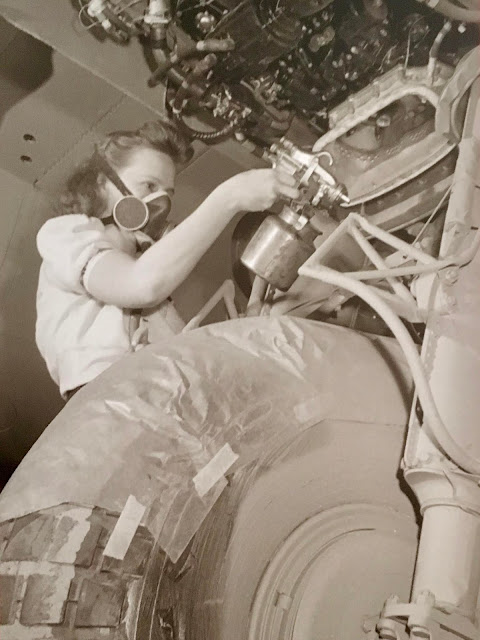 The massive Lancaster was built in Malton, Canada and became the most successful night bomber of the second world war. 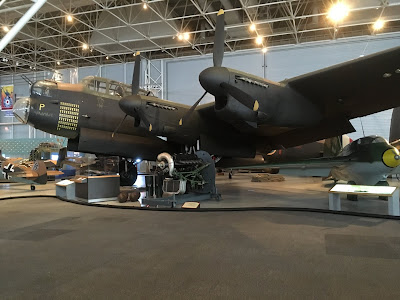 At the rear of the Lancaster is a machine gun turret. I don't know why, but I immediately thought of Star Wars and pondered how some things hardly ever change regardless of what universe they're found in. 😉 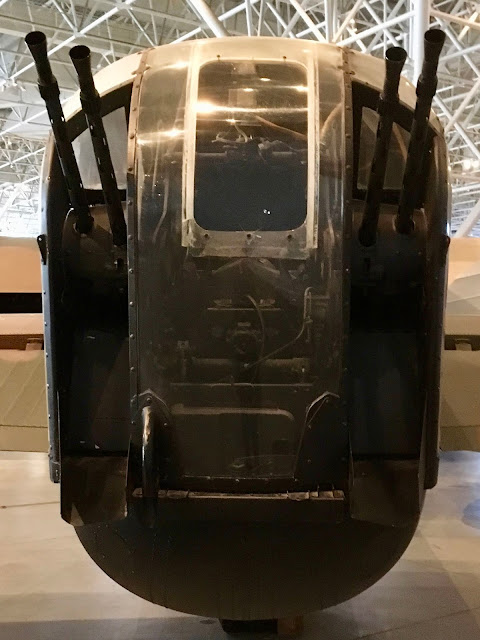 Returning to Earth and the 1940s the museum also has a number of German planes on display. The Volksjager (below) was designed and built in only 90 days. In theory the inexpensive wood and metal airplane could be built by unskilled labourers and flown by novice pilots. This plan, however, was never realized as the war ended. 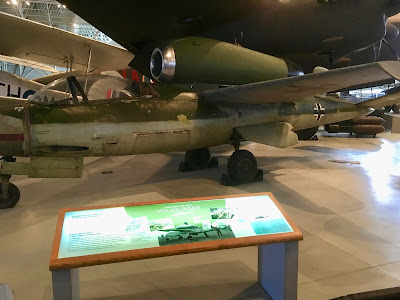 The museum's Volksjager is the same one that was on display in London, England's Hyde Park in September 1945. 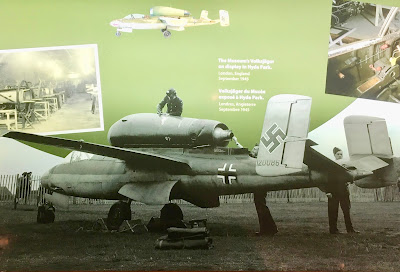 The Volksjager also had a swastika painted on at the back of the plane, but is not visible in my photo. This second German plane shows that marking all too clearly. 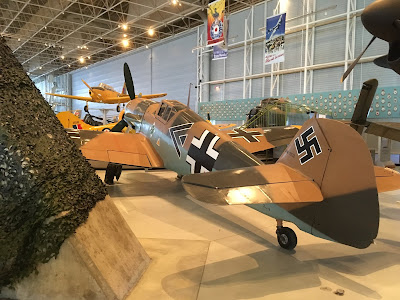 On a lighter note, the museum accommodates visitors of every age and I smiled upon seeing these wooden toy planes in one of the few wide open spaces. I did see some toddlers taking advantage of the miniature planes, but I did not get want to bother them or their family by taking a photo. 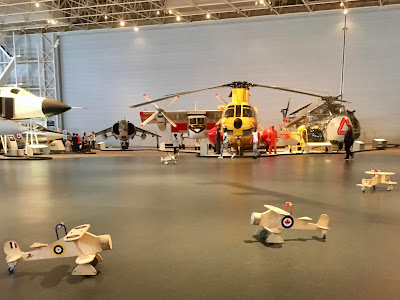 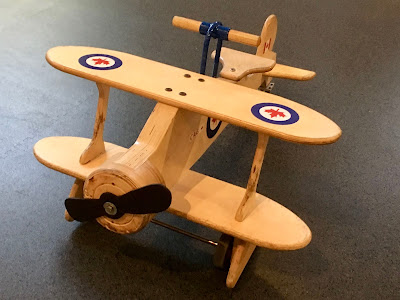 Speaking of kids, there were many school groups at the museum and this public school group appeared intent on learning the basics of aviation. 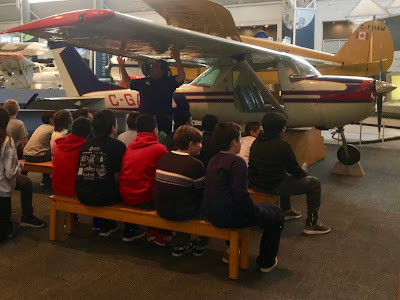 This next airplane is the first in Canada to be designed and constructed by university students. Kudos to the twelve Sherbrooke University mechanical engineer students who built the Epervier X-01 in 2008.

Other noteworthy exhibits include planes built by Bombardier... 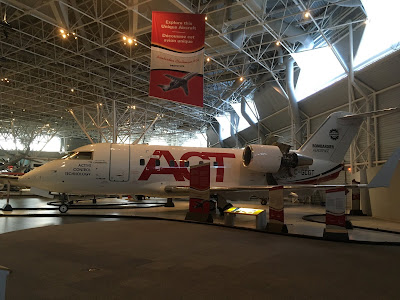 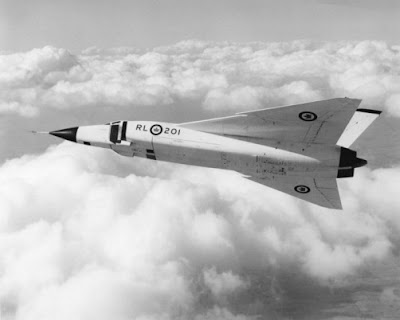 ...or to be more precise the small fragment of the nose as in 1959 after the USSR's Sputnik was launched Prime Minister Diefenbaker made the controversial decision to stop production of the Arrow and ordered all evidence of the five completed aircraft to be destroyed.

The Labrador rescue helicopter is versatile as it can put down on land or water.


Also on display are two unpiloted aerial vehicle (UAV), both used by Canadian forces in Afghanistan.

Last but not least is the Canadarm 2 used by NASA...(model in front, actual Canadarm 2 in back) 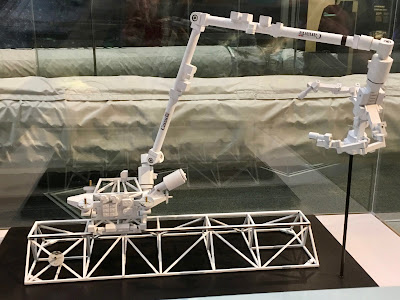 ...and the Argo J4 lunar rover prototype made at the Ontario Drive & Gear Limited in New Hamburg, Ontario in 2012. 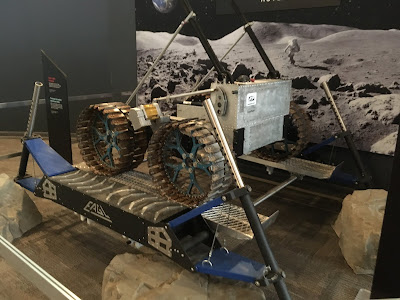 Another bonus of this month (despite the frigid temperatures) has been some glorious sunsets. What better way to end this post? Cheers! 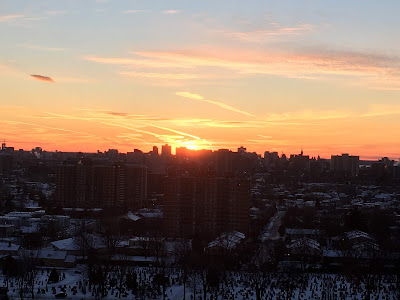 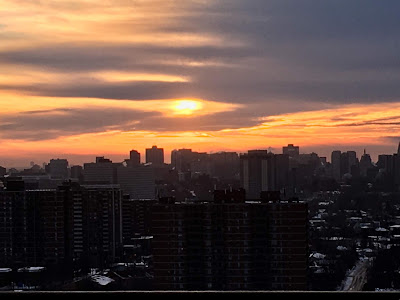 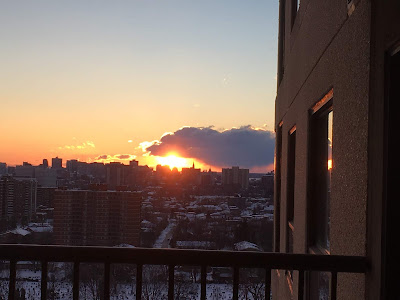