On Saturday, October 26 we returned to France for a 2.5-week repeat housesit in Nice. We were delighted to be able to take public transit and especially eager to travel on Ottawa's new LRT (Light Rail Transit) system. Combining the O-Train with the #7 bus eliminated at least 20 minutes off the journey from our condo to the Via Rail Station. We're impressed!

Once at the Pierre Elliot Trudeau Airport we checked in with Air Transat and with a couple of hours to spare before boarding opted to get a meal at Archibald Microbrewery Restaurant. To be honest, all we hoped for was something a little better than airplane food, but the fare blew us away. This was one of the best meals we've had anywhere - and in an airport no less. Well done!

Satiated, we boarded the plane later that evening and flew overnight to Paris. Upon landing at Charles De Gaulle Airport Sunday morning we purchased train tickets to Versailles. It all sounded straightforward enough, but due to weekend construction (that everyone failed to mention) the train simply came to a stop around the Musee D'Orsay and everyone was asked to exit the station! Huh?

Fortunately, we're familiar with the area and once outside on the street managed to find a metro station that offered an alternative route to Versailles. But not, of course, without yet another stop and train change along the way. The upside? Another great travel story to share, of course.  ;-)

Upon arriving in Versailles we had a 25-minute walk from the train station to our Airbnb flat. Thankfully, I found using the Maps.me app a real stress reducer and highly recommend it. (Thank you Kevin and Ruth for the travel tip. It's much appreciated!)


One of the joys of renting Airbnb units rather than booking a hotel room is meeting homeowners and getting a feel for what it might be like to be one of the locals. Sometimes it's a brief, polite hello, like passing ships in the night. Other times it's a warm welcome as if we're old friends. Francois and his wife were the latter and on our final evening in Versailles Francois asked us to join him in his home (downstairs) for a glass of wine as his wife was in Brittany visiting their daughter. What a lovely and memorable couple of hours - we enjoyed it immensely and are so grateful for the experience. (Fortunately, Francois's English is far superior to our meagre French.) Merci beaucoup, Francois!

The main reason we chose to visit Versailles was to see firsthand Louis XIV's Chateau. Impressed by its grand scale and amazing attention to detail, we could only imagine how visitors must have been awed (dare I say gobsmacked?) 300+ years ago during the Sun King's reign. This place was designed to impress and impress it does - in spades. 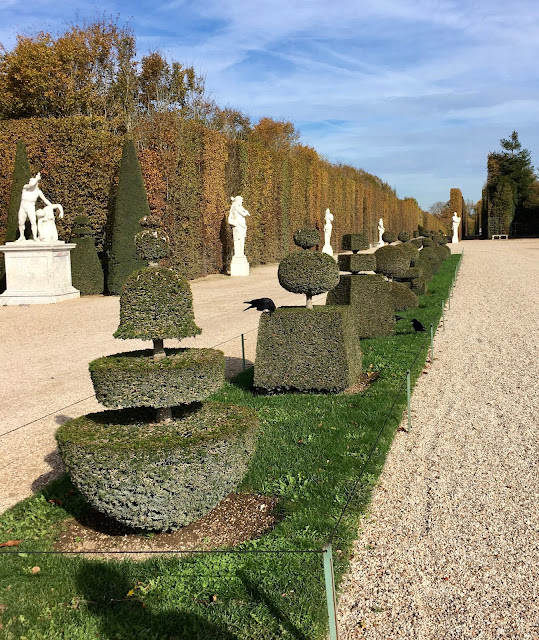 On Tuesday, with our pre-purchased tickets to view the palace proper in hand, we returned to the Chateau and were dismayed to learn there was no alternative except to join the cue with everyone else who'd purchased advance tickets.

The line wound its way back and forth in front of the castle like a gigantic snake. In all there were at least five S-turns and to make matters worse, it was a cold, wet, overcast day.

After the first 60-minutes the Scandinavian family in front of us opted to call it quits and leave. We persevered and from beginning to end spent 2.5 hours in the cue before finally being admitted inside the chateau. Each room was extremely crowded, and being somewhat vertically challenged I found it difficult, if not impossible, to take photos. These next two are courtesy of Google.

Our three nights in Versailles passed by quickly and on the morning of Wednesday, October 30 we returned to Paris and from the Gare de Lyon caught the 2:37 train to Nice. After an hour layover in Marseille we arrived in Nice around 10:00 PM and checked into the Ibis Nice Centre Gare Hotel for the night. 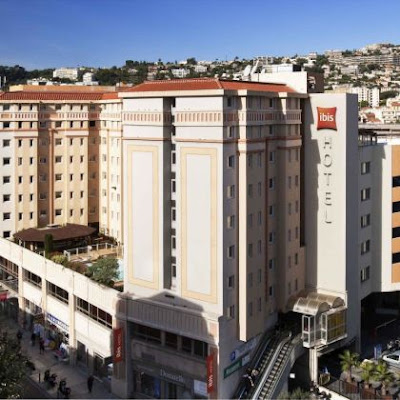 As always it's great to be back in Nice!