10 Weeks into the "New Normal" Thanks to Covid-19 Pandemic

The past few months have been a game changer and like everyone else we've been staying at home, social distancing, obsessive hand washing and donning homemade face masks to go to the grocery store. 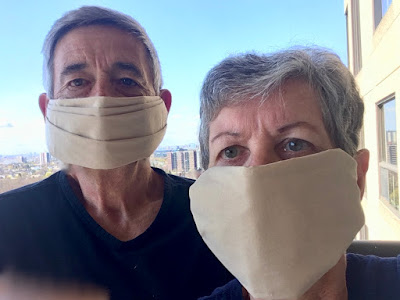 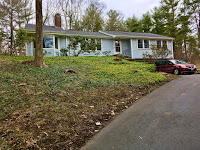 During the last week of February we visited our daughter and son-in-law in Massachusetts to house and pet sit while they visited family in Florida. John and I returned home February 29 and leap year or not it was becoming all too clear that life as we knew it was about to change. 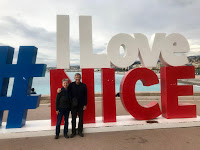 Reluctantly, we cancelled our trip to Nice and on March 11 withdrew from the world into our private "bubble". One week later the Canada-wide lockdown began in earnest. The bright spot is all levels of government encourage citizens to remain active and so we've patriotically ventured outside most days for a walk. 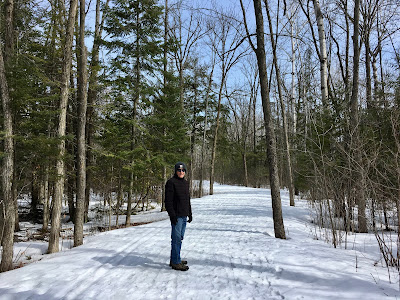 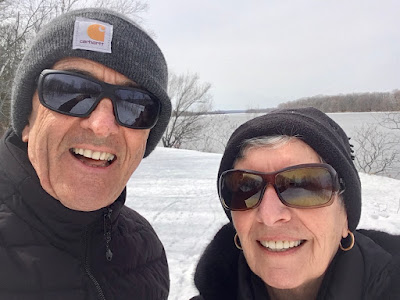 As days stretched into weeks, however, parking lots became congested as more and more people sought refuge outdoors. Fearing widespread communal spread of Covid-19, the city of Ottawa closed off all parking lots that stretch along the Ottawa River Pathway. Undeterred, we abandoned the van, altered our route and walked from the condo along the Aviation Parkway path to the Aviation Museum to stroll the bike path.

We also enjoyed walking in the National Military Cemetery that's a short distance from our condo. (It's the high-rise on the far right in the centre of this photo.) 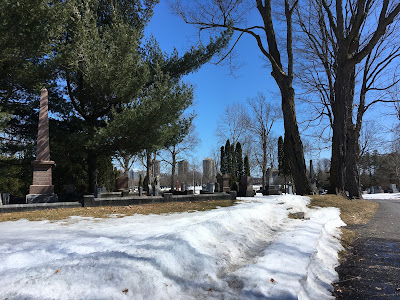 But once again a few irresponsible people not adhering to social distancing ruined it for everyone and the cemetery gates closed. 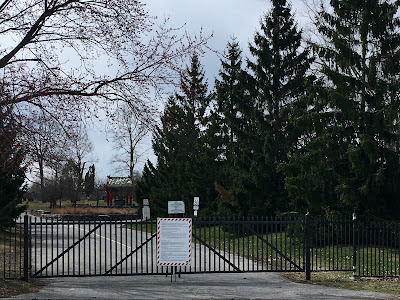 Once again we altered our routine and one day John headed out on his own and discovered a quiet wooded area of perhaps a few hundred acres. It's located to the east of the condo and just south of the Rockcliffe Airport. It's become one of our favourite walks, especially now that spring is slowly making its presence known.

Even the wildlife appreciate this area.

Meanwhile, we've found interesting ways to pass our 23-hours indoors. We've both continued our daily French lessons with Duolingo. John's read a multitude of books, watched Netflix as well as countless reruns of his favourite British comedy television shows on YouTube. He's also tried his hand at sourdough bread making and has created countless, tasty meals. I chose to crochet and knit my way through my meagre stash of yarn and actually complete a project or two. And thanks to YouTube I made face masks from a pillowcase (with no sewing machine, I might add) and tried my hand at fermenting various foods. The sauerkraut is nearly gone, as are the mixed vegetables, so it's definitely time to make more. 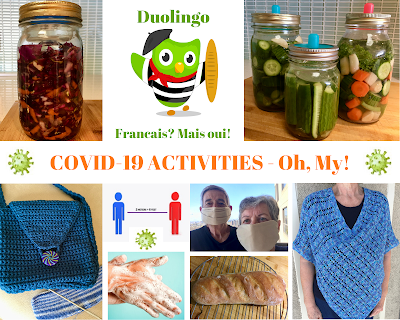 The past ten weeks may have been quiet, but there's been lots of reasons to feel grateful. At the top of the list in April is John celebrating his 69th birthday. Please know I offered to order take out that day, but he declined and we're both ever so happy he did. Dinner was delicious!


Other small victories and celebrations included a special delivery from John's youngest sister of hand sanitizer. Thanks, Bonny! 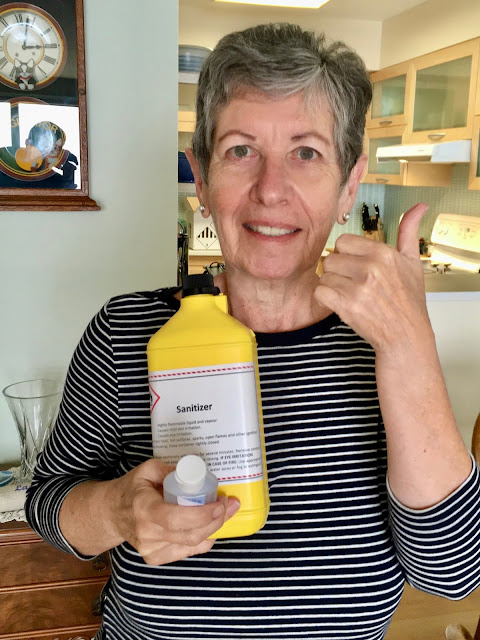 The Canadian Forces SnowBirds flew over Ottawa on May 7th on their Operation Inspiration cross Canada tour. 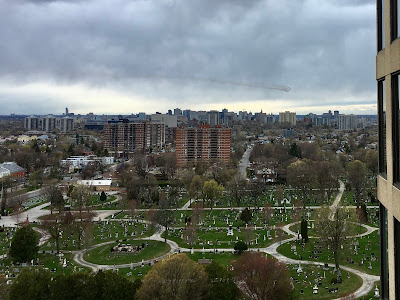 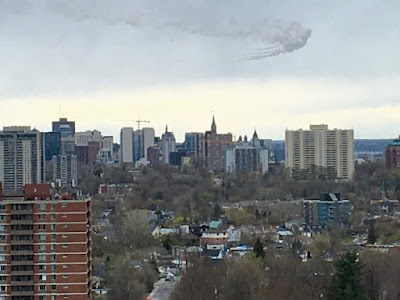 Mother Nature has definitely been temperamental of late with multiple snow squalls having passed through Ottawa on numerous days - the latest arrived May 9th. 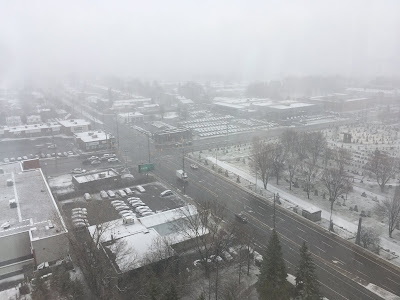 A few days later the window cleaners appeared on their semi-annual visit. (Isn't it amazing what captivates us during a pandemic? Hence the photo and video!) 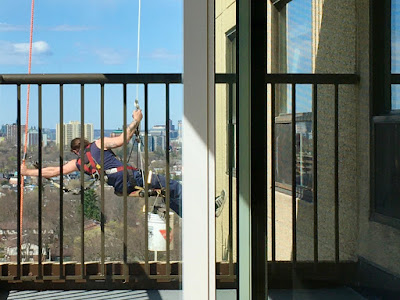 Then, the day finally arrived when I could sit outside on our balcony without a coat. Whoo-hoo! I've waited months for this day. 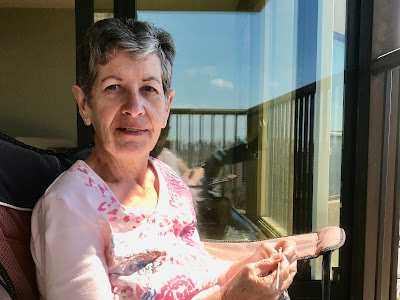 John admitted he felt more than a little envious when he spotted kayakers on the Ottawa River on two separate occasions. The good news is he remembered to take his cell phone with him both days and was able capture the moment. 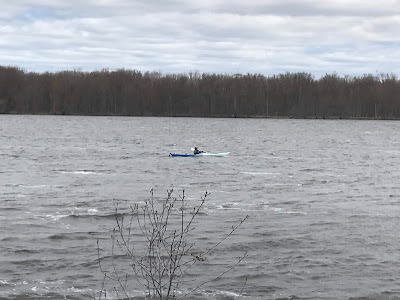 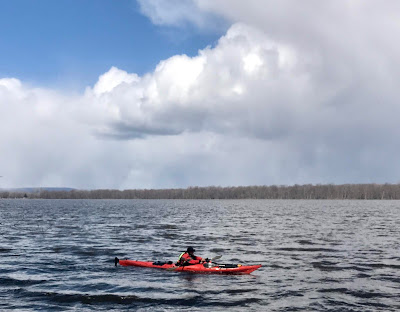 Last, but definitely not least, we've become more adept at handling this "new normal" and it certainly helps that spring is finally making its presence felt. 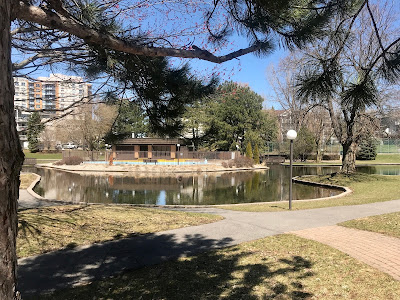 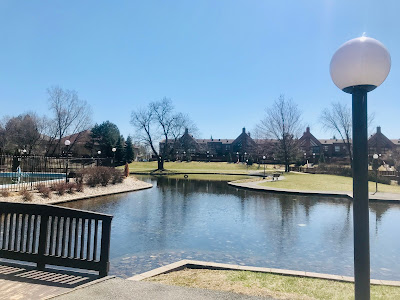 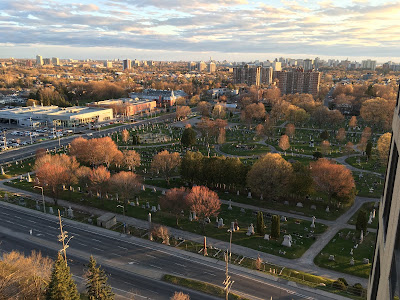 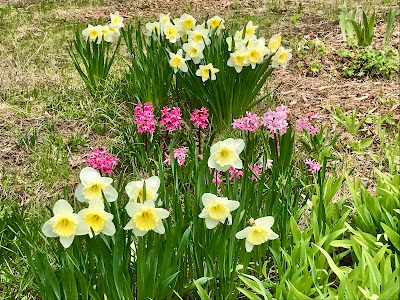